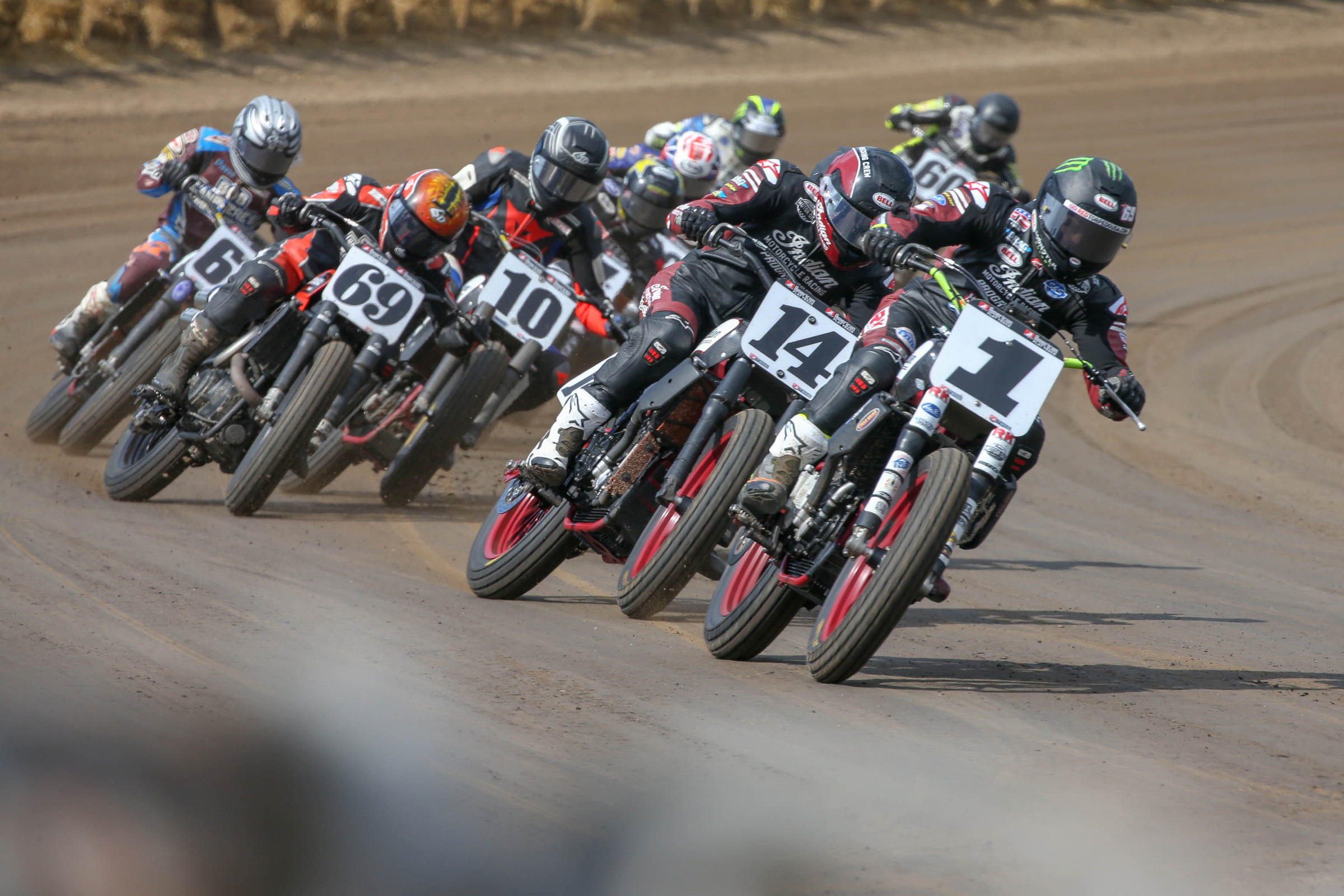 It was hoped that the Lucas Oil AMA Pro Motocross Championship would start this weekend in Indiana, but the series is on hold until (we hope) August. However the American Flat Track Championship actually is starting this weekend, in front of limited fans, with a double header this Friday and Saturday night from Volusia Speedway Park in Barberville, Florida.

AFT was supposed to start in Daytona back in March, but you can guess what happened there. Riders were already in place when the race got bumped the day before it was set to happen. Now, it’s finally back. Here’s a primer so you’ll know how and why you should check out this weekend’s action. And, by the way, you can via live coverage via TrackPass on NBC Sports Gold. Live streaming for Friday, July 17 will begin at 4:30 p.m. ET (1:30 p.m. PT) and Saturday, July 18 at 3:30 p.m. ET (12:30 p.m. PT). Or watch the shows airing next Thursday on NBCSN starting at 11:30 p.m. ET/8:30 p.m. PT.

AFT Twins is now called AFT SuperTwins. There are some new rules, but basically, you can still consider it the 450SX class (premier) of flat track. The bikes are twin-cylinders, obviously. This is the class everyone aspires to be in and win. Here are some storylines:

The New Champ and Old Champ

Jared Mees has generally been the top rider in American Flat Track during his generation. His stiffest competition used to come from Bryan Smith, who won the 2016 championship, but once the new Indian Motorcycle effort came out for ‘17, Mees, who got a big jump on development on the bike, took off. He won the 2017 title and dominated in 2018. In late 2018, competitors started to get their Indian bikes dialed in and close the gap.

Then came a young rider that Mees used to help: Briar Bauman. Briar got on the factory Indian Motorcycle in late 2018, started winning and gaining confidence, and then took a huge leap. He crushed it in early 2019, while Mees had some uncharacteristic bad luck and inconsistency. Everyone waited for Bauman to crack under pressure. It never happened. The youngster sailed to the title with a race to spare.

So now the script is flipped. It’s Mees as challenger and Bauman as champion. Obviously, their relationship isn’t what it once was, as Bauman is no longer crashing at Mees’ house soaking up championship secrets! Plus, they’ve both advertised their completely different philosophies on racing. Bauman is all about having fun with his buddies at the track to keep the pressure off, while Mees is as serious and focused as they come on race day.

So we’ve got a nice little yin and yang here. The new champ vs. the previous champ, one defending, one rebounding, two different personalities and a little bit of personal stuff in the mix, too.

Harley-Davidson dominated flat track for ages. Then Indian Motorcycle jumped into the game in 2017 (or, back into the game if you consider stopping in 1953 and returning in sixty-some years later as a break) with an all-new purpose-built racer. Harley built a new bike, also, but it was no match for the Indian, with Harley’s machine based on a production bike and Indian building one for racing specifically. The much-hyped Indian versus Harley rivalry never got started because Indian cleaned everyone’s clock.

Each year, Harley makes changes and there’s always hope the rivalry will get competitive. That hype is here again this year. Bryan Smith, the aforementioned 2016 champion, is now with Harley, along with his ace tuner Ricky Howerton. These guys know how to build bikes and Smith, who is an unfiltered type, says it’s awesome. He usually doesn’t say stuff he doesn’t mean. Can Smith and Howerton get Harley back to winning races?

Harley has more firepower via uber talent Dalton Gautier. He won last year’s Singles Championship (consider that the 250 class of AFT, more on that later) so he’s the hot rookie, and Harley signed him. Gautier, also, has talked about proving people wrong about the Harley. Is this standard pre-season “bike has never been better” talk or legit? Also, Jarod Vanderkooi  was Harley’s best rider last year, if the bike makes gains, he will benefit, too.

Harley-Davidson vs. Indian Motorcycle is waiting to ignite. Meanwhile, Yamaha has been building a heck of a program of its own. Estenson Yamaha is all-in lately. JD Beach was a Yamaha road racing ace with flat track roots, and whenever he’d show up at an AFT race, he’d run up front. With American Flat Track growing and American road racing still looking for footing, it only makes sense for Beach to go full-time flat tracking. How much can Beach improve this year? How much can Yamaha improve? When will they make the super-sweet looking MT-07 DT race bike a production-style bike one could purchase? (Asking for a friend).

Here are some quotes from Beach because we appreciate Estenson sending them to us:

“This extended off-season felt like forever. I’d like to thank American Flat Track for doing everything in their power to get the show going during this difficult time.

“This break has been great for the team and myself to keep working on the Estenson Racing Yamaha MT-07 DT. With the new team structure and the new crew, it’s been good to have the extra time for them to get their feet wet. Luckily for me, the team gave me a practice bike that I’ve been doing a ton of laps on at my house. It’s been great not only for me but for my crew chief, Josh Day, to get more formalized with the bike as well.

“I think with this long off-season we have taken some good steps forward with the bike. It will be interesting to get on track with everyone else because I know everyone is dying to get back to racing. I think this weekend it will be really important to not get too worked up and let the adrenaline get pumping too hard once we’re out there. I’m hoping with the improvements that we’ve made that we can fight at the front even when there are no right handers and jumps.”

No Right Handers and Jumps

COVID-19 will have a strange impact on the AFT season. In the scramble to find tracks that can actually hold races, some traditional venues are out, and with it goes the general balance of disciplines. Usually, AFT provides a menu of four tracks: Miles, half miles, short tracks, TTs. But this year’s revamped schedules ends up with lots of half miles. Some veteran guys, like Smith and Mees, really excel at Miles, so this might hurt them. Some guys, like road racer Beach, crush the TTs, which feature right-hand turns. So this year no one gets to play to the extremes and instead everyone just pretty much has to handle the half miles. It will be interesting to see if that impacts the championship.

If you start listing the names of contenders all you do is leave someone off and get them mad. So we’ll do our best to roll out some others that can run up front. For sure, Briar Bauman’s brother Bronson is capable, he’s also on factory Indian Motorcycle equipment and showed huge gains last year. Kolby Carlisle is the 2017 Singles Class Champion and the Estenson Yamaha teammate of Beach. Indian Motorcycle will again be represented by a deep bench of potential race winners on private FTR750s, including the likes of Brandon Robinson, Sammy Halbert and 2018 Singles Class Champion Dan Bromley.

This is like the 250 class in supercross or motocross, in that it’s the stepping stone to the big class. It’s contested on 450s (the big class uses big, twin-cylinder bikes). The action is usually crazy and unpredictable (sound familiar?) when you take a bunch of young riders and mix in hungry vets who sometimes drop down from the big bikes. Sound familiar again?

The biggest names are Shayna Texter, AKA the “girl who beats the guys” on her Red Bull KTM. Shayna usually struggles on TT tracks but does fine on half miles, so this year’s schedule helps. Mikey Rush almost won last year’s title on an RMR Honda, now he’s on the Estenson Yamaha team. The biggest off-season move came from Twins veteran Henry Wiles, who is moving to Singles for the RMR Honda squad. There was a time when the premiere class allowed riders to use 450 singles or big twins depending on the track. Wiles was always good on the 450s.

Of course, the Singles class is where the rising stars shine, so you never know what youngster will catch fire. Dallas Daniels, of Estenson Yamaha, is touted as the Next Big Thing in AFT and he did not disappoint last year when he turned pro.  The 17-year-old had a win, three podiums, and five top fives in the final seven races of ‘19. If he merely keeps that pace up during a full season, he’s a title contender, but you’d only expect him to keep getting better, right?

This class debuted as a championship last year to offer two different Twins categories—the high-end, high-budget factory stuff in SuperTwins and the more privateer-based Production Twins class. AFT has gone through tremendous growth over the last few years, so this is a way to keep the old run-what-ya-brung flat track feel and offer high-end racing as well.

Cory Texter is back to defend his title. Ryan Varnes, Chad Cose, and James Rispoli are some of the names expected to battle him for the number-one this year.