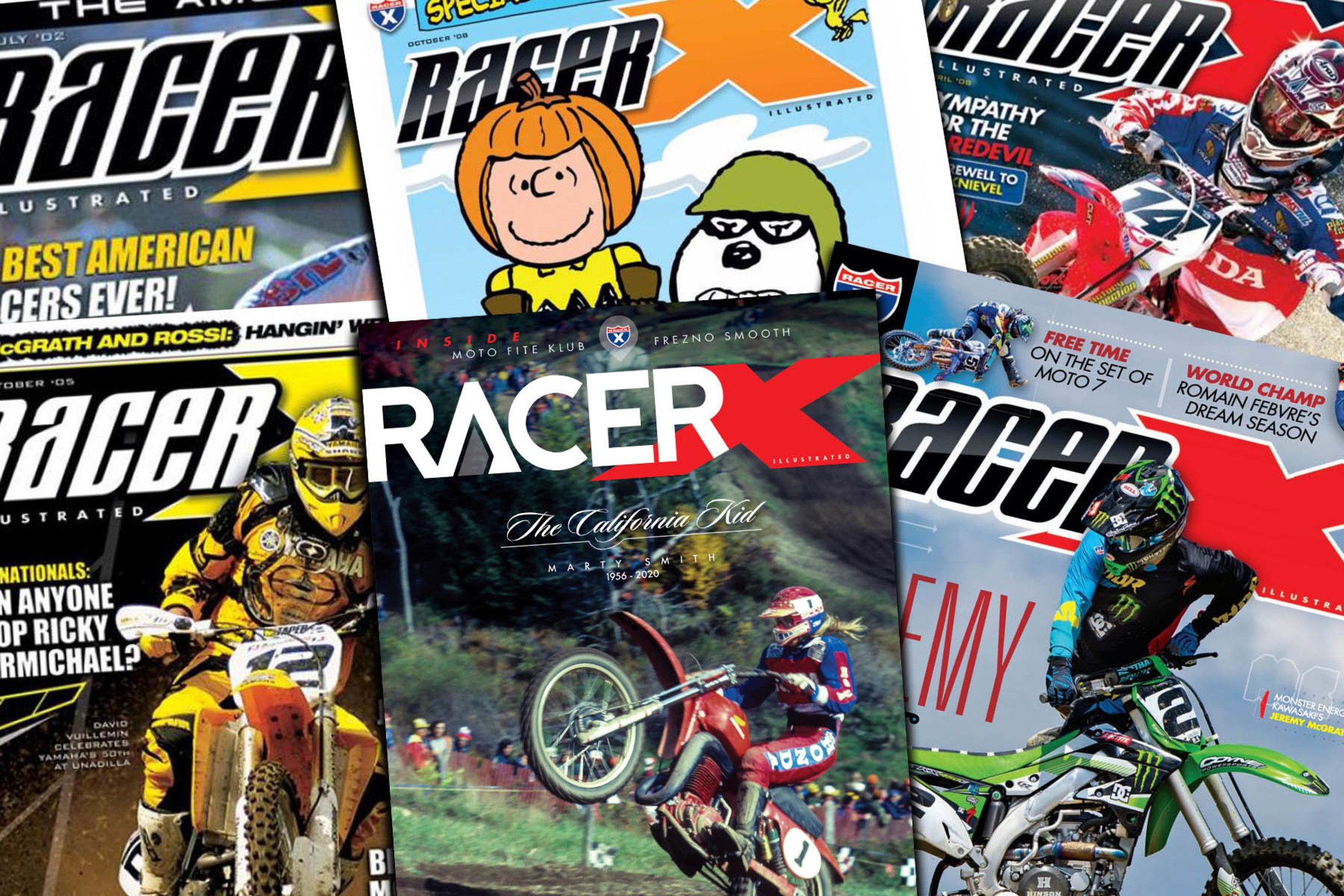 The photo that you see on the front cover of the new Racer X magazine features the late Marty Smith. It was shot by the late Dick Miller, the former editor of Motocross Action magazine, at the October 8, 1978 round of the Trans-AMA Series. Smith didn't actually win the race—Suzuki's Roger De Coster did—but the photo was the best one we could find that epitomized Smith at the peak of his career, as well as the era when he shined as America's first motocross hero. It's the Marty Smith we remember most from those glory days: red, white, and blue, long hair flowing from under his helmet, blasting his fire-engine red Honda works bike around the race track.

This is not the first time Racer X magazine has gone with a "retro" cover, as you are about to see from this week's The List.

In 1998, the first year of this magazine, Eric Johnson wrote an epic feature called "When We Were Kings" about the 1981 Trophy and Motocross des Nations, which marked the first year that Team USA ever won the two events. Team Honda's Donnie Hansen, Danny Laporte, Chuck Sun and Johnny O'Mara turned the motocross world upside down with their stunning wins in Belgium (250cc Trophee race) and West Germany (500cc Motocross race). The story appeared in the September/October issue (we were only bi-monthly back then) Volume 1, #4, and the photo we chose for the cover was Johnny O'Mara at the Trophee des Nations race in Lommel, Belgium, shot by Sir Jack Burnicle.

It was four years later that we decided to do another retro cover, again centered around Team USA. This time it was a look back at the 1986 Motocross des Nations at Maggiora, Italy. It was once again all Honda riders, and O'Mara was once again part of that epic win. This was the race where O'Mara beat all but his Team USA teammates David Bailey and Rick Johnson on a 125. The story anchored our "American Issue" (July '02) and was called "The Untouchables." And since we already had Johnny on one cover, we decided to go with this epic shot of David Bailey from that race, again shot by Sir Jack Burnicle.

In February 2004 our cover featured what many consider to be the best motocross photo ever taken. It was shot by then-Cycle News reporter Charlie Morey at the 1974 Highland Hills 500 National in Hillsboro, Ohio. It features #7 "Jammin'" Jimmy Weinert on his factory Kawasaki coming together with #17 Tony DiStefano, then a CZ rider. Weinert's handlebar is literally jammed into Tony's chin, which is why the photo is called "Tony D. and the Jammer." We did a whole feature on this moment in motocross history.

Our next "retro" cover wasn't from a historic race, but rather from a throwback race for Team Yamaha. The brand was celebrating their 50th anniversary and decided to show up at the 2005 Unadilla National with yellow bikes, harking back to the 1970s when Yamahas in America were yellow rather than white (and later blue). We've always appreciated bike and gear brands that go all-in on "retro races" so we wanted to reward Yamaha's effort while also honoring their big 50th anniversary. Team Yamaha's David Vuillemin was the cover subject for the October 2005 issue, and the photographer was our longtime friend Trevor Hawk, an amateur photographer from Ohio who was given his first-ever press credential for the Unadilla race. Not bad for a beginner!

The April 2008 issue marked another big anniversary—our own! Racer X Magazine was 10 years old at that point, and we shouted out the news on the cover. But the photo we chose had nothing to do with our milestone, but rather with the Anaheim "retro" Supercross. Factory Connection Honda's Kevin Windham showed up in pitch-perfect No Fear retro Honda gear, boot gatorz and all! The photo was snapped by our man Simon Cudby.

The October 2008 cover was one of our biggest hits. It featured none other than Charlie Brown racing against his beloved dog Snoopy, who thought he was "Joe Motocross" in a famous CBS special called "You're a Good Sport, Charlie Brown." Charlie Brown and Snoopy were the main characters in the legendary comic strip Peanuts, which was created by the late Charles M. Schulz. His son Craig was into motocross in the early seventies, so he decided to devote a weeks' worth of his Peanuts newspaper strip to motocross, with Snoopy imagining himself as "Joe Motocross," a fearless racer. That in turn led to the CBS special, which was a huge mainstream moment for the sport. If you've never seen it, here it is:

So how did the Peanuts gang end up on the cover of Racer X? We became friends over the years with Craig Schulz, the inspiration for the Joe Motocross concept, and he was kind enough to tell us all about his youth, his motocross racing, and how the Emmy-winning cartoon came about. It's a fascinating story, but also a very hard-to-find collector's issue!

On the front of the November 2009 issue is another retro anniversary subject, this time GEICO Honda's Justin Barcia whipping over the Sky Shot jump at Unadilla. He was wearing Fox Racing gear that celebrated the company's heritage, as Fox turned 35 that summer and kitted their riders in classic looks. Simon Cudby took notice and snapped this shot for us.

Even though he had long been retired, we still wanted to do something cool with Jeremy McGrath, the King of Supercross, when he returned to Kawasaki Team Green as a brand ambassador and mentor. Jeremy is still amazing on a motorcycle, as you can see by Simon Cudby's cover photo for the December 2015 issue. The story, penned by Eric Johnson, was called "Being Jeremy."

McGrath was again the subject of our cover in April 2017, but he was not actually riding. Instead it was Ken Roczen doing a spot-on remake of Jeremy's epic scenes from Fox Racing's TerraFirma 2 free riding video, aboard a 1996 Honda CR250! Roczen and Red Bull filmed the scene at the exact same place where McGrath originally rode, Castillo Ranch in central California. Here's the video in case you missed it:

In February and March 2018 we featured two retired legends on back-to-back covers. First, it was Ryan Villopoto, shot by Simon Cudby, as the nine-time AMA Supercross/Motocross Champion explained how much he still loved riding dirt bikes.

One month later our March 2018 issue featured one of our more unique and difficult cover shots, the elusive James Stewart riding a Honda at his private track in Florida. The cover line asks the question that was on everyone's mind at the time, "Where the Hell is James Stewart?" And the young photographer who got the shot, during Stewart's annual JS7 ride day just before the Mini O's in Florida, was Collin Speckner. We never did get to talk to James for the feature, but he has since been a little more public in his post-racing life since those mysterious days.

Finally, January 2020, another McGrath homage by Ken Roczen, this time when he went all-in for Red Bull Straight Rhythm, running spot-on gear on a spot-on bike that harkened back to the King of Supercross' mid-nineties run with Fox Racing and Team Honda. It was our most recent "retro" cover, shot by Spencer Owens, before this month's remembrance of Marty Smith.