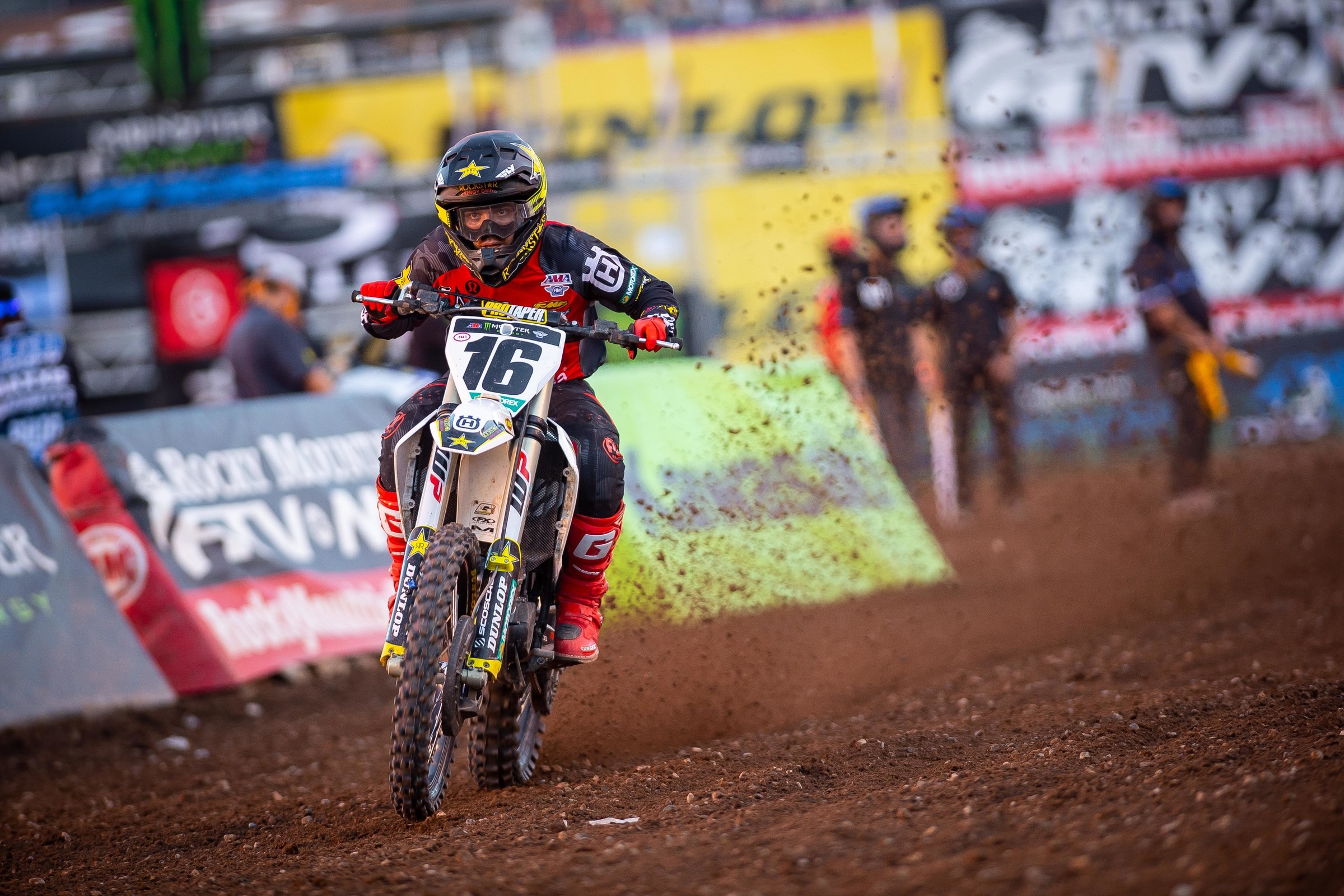 The Salt Lake City SX, #4 in a series of 7 if you’re counting by the way, was pretty damn entertaining. The 250SX west guys came back from a long delay and there’s no doubting the depth of that coast is much better than the east. The 450SX class, well that was pretty cool also. Lot’s to unpack when it comes to this race, so let’s get right into it, yeah?

First, the track. I’ve been impressed with the track crew getting into it and giving us new tracks through the first three rounds. This week they got a bit of a break and just reversed the track from the last race. Kind of weird but it worked, the whoops were tough and the dirt looked pretty good, probably because it got some water from that previous mudder. There were a few things that only the top guys could do and as you all know, that’s my jam.

Let’s take a look at some uppers and downers from the race yeah?

Cooper Webb: I mean, duh. Coop and Kenny Roczen put on a hell of a show in the heat and early in the main event. It was something to see between a couple of guys that aren’t really buddies, let’s leave it at that. Webb’s gone 2-1-2-1 now in four races, moved into second in the points and oh yeah, his whoop speed is so much better than it used to be. Webb’s ability to have eyes in the back of his head is phenomenal. He’s been so good this whole time and at SLC4, he had command of the race almost the whole way.

Wacko Zacho!:Zach Osborne’s been real good in SLC races and, as I pointed out, the whole Rockstar Husky team has been solid, but in this last race, Osborne took it to a new level. He was passed early by Blake Baggett, gathered himself up, got Blake back and motored away from the pack of guys behind him that included Baggett and Roczen. From there he couldn’t get to the back of Webb but he also didn’t get caught by anyone. Osborne’s up and down early season is a distant memory now, because the #16 has been on it.

250SX West: I mean, it was cool seeing the depth and the names in the 250SX west. Austin Forkner grabbed the win and honestly, he was better than I thought he’d be. Dylan Ferrandis was catching Forkner late, and I was thinking the 1W would make it happen but full props to Forkner for holding him off and getting to within ten points of Ferrandis. But behind those two guys, look at the depth level of the class- it’s crazy that there were just two privateers (Penrite Honda team) in the top 14 of the results. Quite a change from the 250SX east. DEEP FIELD!

RAM IT:Cameron Mcadoo collected his second career podium by passing Justin Cooper early in the main event in a great ride. We never saw Cam get going on his PC Kawi earlier but the time off has been very beneficial to him according to his coach Nick Wey (we discussed Cam a lot on our mountain bike ride the other day) and he’s eager to prove he belongs up front. Wey’s challenge with McAdoo is to calm him down and stop the “Send it” default mode he sometimes goes into.

Marty!: Davalos has been solid almost every round so far here in SLC. He once again looked strong in getting a sixth and who knew this break would work out for a guy like Davalos? Apparently, he does know what he’s doing out there!

Bloss is your boss: Benji Bloss was very good this past race, he was obvi very fast in the whoops but the other races had tough whoops and he didn’t shine there so it was more than that. Benji qualified sixth, was moving up through the pack when he dorked out on Brayton but then gathered all that time back and passed JB and others. He was better than that 10th on paper but the move on Brayton combined with a similar move on Kyle Cunningham at SLC 3 makes me think he might be slightly drunk when the gate drops.

Chiz: Because, yeah, he’s just going to Chiz. All. The. Time.

The Lawrence brothers: Look, I have zero doubt that Jett and Hunter Lawrence will be very good at this SX and MX stuff but it seems to me, and maybe I’m on an island here, that we haven’t got any, actual, you know, real results on paper. Hunter has been very good outdoors but this was his first SX and he underwhelmed to me. The Jett, while VERY exciting, crashed. I know this is a shocker to you guys but maybe hold off on the hot tub interviews? I like Ralph Sheheen very much but he’s really in love with the brothers. I just want to see results, that’s all.

Justin Cooper came into the race just behind Ferrandis in points, so to get passed by Dylan and McAdoo in the main event and get sort of dropped, well that’s not good. Just two races for him remain and he needs to rebound this weekend and get the win or, to me anyways, he’s out of this thing. The showdown is too chaotic to count on anything there.

Mookie’s bike: The MCR 450F went out for the count early in the main event and that sucks for all of us looking to see Malcom Stewart go to the next level. I blame Foot Nick.

Bam Bam:Justin Barcia’s not been enjoying his time in SLC in terms of race results and it hit rock bottom this last race with a bike issue that caused him to DNF. You know, as a former mechanic I look at these bike problems from good teams like Barcia or Mookie and think about how RC’s bike just never broke and he won all those races. Lots of things are out of a mechanic’s hands so while some of it is on them, a lot isn’t. Just a random thought.

Justin Brayton: I went mountain biking this week with Brayton and Roczen and I was hoping my appearance there would lead them both to new heights at these SLC races. Instead, Brayton battled a stomach problem and had his worst race of the SLC series and Kenny, while better than last race, faded backwards. So, yeah, maybe we just need to do this…

Me: As in, my training program sucks.

Email me at matthes@racerxonline.com if you want to chat about this race or whatever else is on your mind.