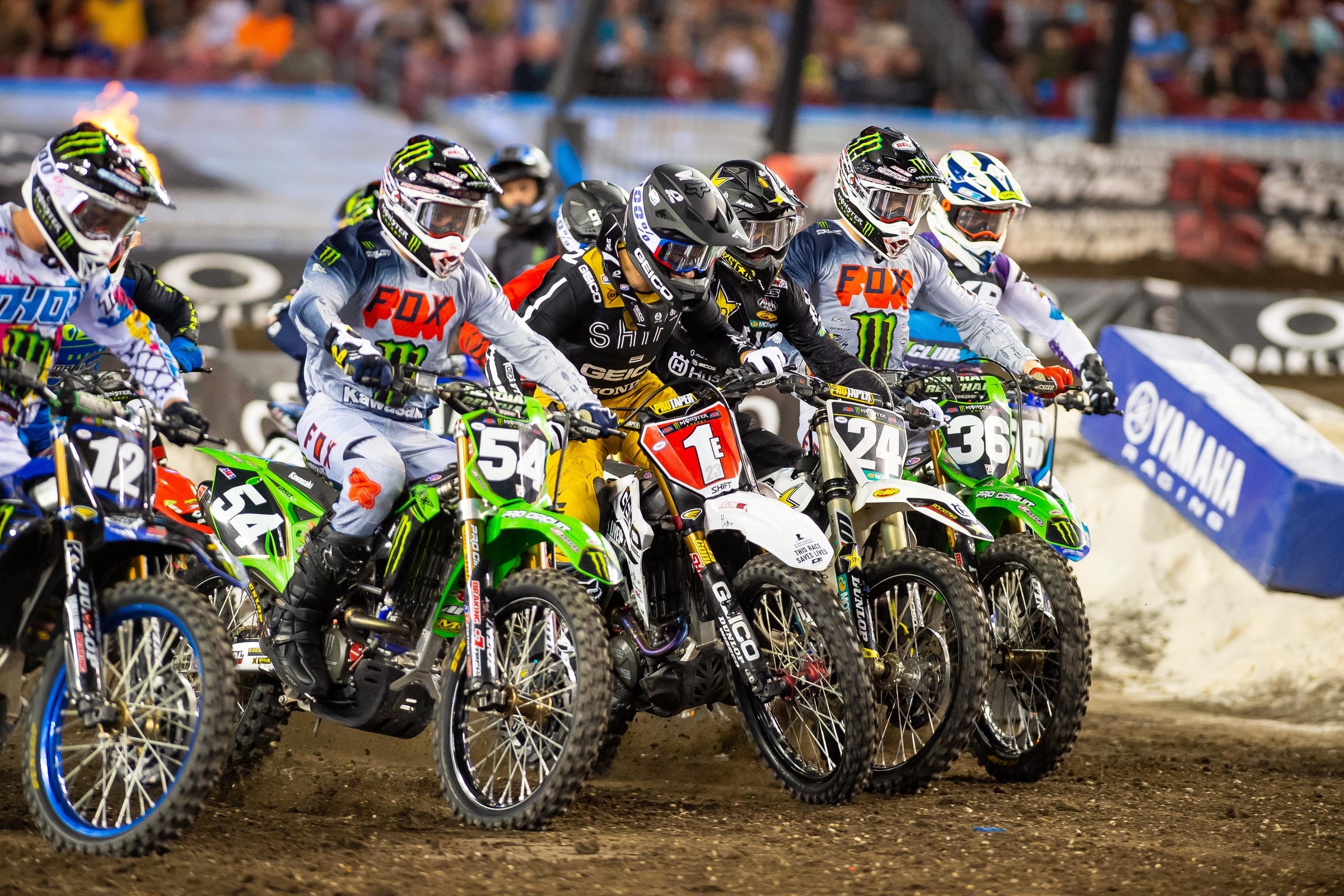 From the gate drop at the Daytona Supercross main event to the first gate drop at the Salt Lake City 1 Supercross on Sunday, 85 days will have passed in between. With that in mind, we fill you in on everything in the 250SX East Region Championship that happened before—and since—March 7. Here’s the rundown on the East Coast.

Although he won the title last year, Sexton said he wanted to be a different guy in 2020, and until the championship was postponed, he was. Last year, Austin Forkner won a bunch of races before getting hurt, and Sexton was in position to grab the title. This year, he’s showed the speed to catch the riders in front of him. In Arlington, he caught and passed a leading RJ Hampshire in the first race of the Triple Crown—although Hampshire knocked him down and grabbed the checkered flag. Sexton rebounded to take the night’s overall win, even outdueling another title rival in Shane McElrath in the second race. In Atlanta, he caught a leading Hampshire again before grabbing the win. Only twice has Sexton not been able to catch the leader: McElrath at the Tampa opener and Garrett Marchbanks at Daytona, but he finished second in those rounds, and is the only 250SX East ride on the podium in each race.

During the break, Sexton was transitioning to riding a CRF450R in preparation for the Lucas Oil AMA Pro Motocross Championship when the racing shutdown but said near the end of April that he was focused on adding another #1E plate to his resume. Plus, there’s talk of a new secret weapon for Sexton, with a retired multi-time champion coming down to the Moto Sandbox to give Sexton some tips. The #1E is motivated to take another step towards finishing the year his way on Sunday.

Shane McElrath is good at openers. He won the 2017 Anaheim 1 Supercross, the 2018 Anaheim 1 Supercross, and then won the opening Tampa Supercross earlier this year in February in rather dominant fashion. McElrath, like Sexton, wants a #1 plate this year that will add some weight to his name come the time he transitions to the 450 class himself. And, like Sexton, this year could be his last in the 250SX Class. If the class eligibility rule takes into account this year, and McElrath makes every main 250SX East main event in SLC, the North Carolina native will be out of the class come June 21—whether he’s champion or not. He told our Jason Weigandt earlier this week:

A former winner in Salt Lake City, McElrath could very easily repeat his Tampa performance on Sunday come the first 250SX SLC main event. Only ten points behind Sexton and with a total of five rounds to go, he’s very much still in this championship hunt.

Unfortunately for Hampshire, he will not see his 2020 supercross point total exceed 80 points. The new Rockstar Energy Husqvarna rider suffered a torn ACL in December but was fully committed to the 2020 250SX East Region Championship, so he skipped out on reconstructive surgery. When the COVID-19 situation suddenly went from 0 to 100 in two weeks, the supercross schedule went up in the air, with rumors it would resume after Lucas Oil Pro Motocross, possibly in September. The Hampshire camp decided to undergo the surgery in early April.

Then, the schedules flipped, and Supercross moved up to May. While grinding through physical therapy for almost two months and progressing quickly, Hampshire confirmed on Instagram on Wednesday that he would not be lining up for any of the races in Salt Lake City.

Pretty bummed that I’m not heading to Utah to go racing. I’ve done everything possible to speed this healing process up. With being just over 8 weeks post Op. from ACL surgery, the chances of my knee holding up for the remaining 5 rounds are very slim. We were told sx wouldn’t resume till September which is why I got it fixed when I did. Who knows, I probably would have made the same decision even if I knew we’d be getting back to racing earlier then expected. I’ll keep grinding and be ready shortly, gotta make up for missing these rounds! Thanks to the team for supporting the decision @rockstarhusky #hqvreturntoracing

It’s crazy to think the last time we watched a 250SX race, this supercross sophomore earned his first heat race win before taking his first professional win in the main event. Marchbanks had a second-place finish in the San Diego mud last year but other than that his 2019 results weren’t terrible but they weren’t great either, with 4-5-7 finishes, respectively, entering Daytona. Then when the gate dropped, Marchbanks launched his KX250 full throttle straight in the right direction, becoming only the fourth rider to win their first 250SX race in Daytona.

So now, can Marchbanks carry any momentum from a race win nearly three months ago? He’s a Utah native, but this is home race without fans in attendance. Will it help? If he is able to tap into the jar of success he had at Daytona, he could play spoiler for Sexton and McElrath.

Jeremy Martin has been pretty solid in his return to racing. Aside from a rough day in Atlanta that involved hitting a Tuff Block and going down before finishing 19th (he was in the podium mix until that crash), his other three finishes were 3-4-3. Martin has told us that he’s too far back to win this championship, and he’s got one eye on trying to capture another 250 National Motocross Championship, but he should be in the podium mix. Remember, Martin has ridden a lot of laps at altitude at Eli Tomac’s place.

The third GEICO Honda rider inside the top ten in points through four rounds, Jo Shimoda’s results are overshadowed by his two experienced teammates. But that doesn’t discredit the work he is putting in. He told our Jason Weigandt earlier this week that he had switched trainers and he during the lockdown he posted clips of him on a CRF450R. Watch for Shimoda to be someone to benefit from the break in his rookie season.

After a bad outing in Tampa, Lopes quietly put together three-straight top-ten finishes before the championship was postponed. He’s looking better in his sophomore supercross year. He got a great jump out of the gates in Daytona and was running in the top five early before dropping back to finish eighth, everyone who finished ahead of him were on full factory teams. According to his Instagram, he looked to be in Brazil riding recently and if that’s the case, good thing he was able to go home with family but also get back into the United States for these races!

Like Hampshire, Jordon Smith’s 2020 supercross point total will remain at 48. Smith crashed on the first lap of the Daytona Supercross main event during a tangle with McElrath and the racing incident resulted in a torn ACL. Smith’s 2019 supercross run was derailed by an early wrist injury that nagged him throughout the entire calendar year, so in his first year with a new team, he was probably expecting more. But just like Hampshire—who was an old friend and teammate during their GEICO Honda days, he’s left rehabbing his knee, and waiting until next year.

Yet another rider who will not lineup in Salt Lake City due to an injury, this one is of more recent news. Last week while training at the ClubMX training facility, Josh Hill crashed in the whoops and suffered a dislocated and fractured hip. Hill, who was competing in the 250SX class of supercross for the first time since 2007, had two top-ten finishes before being caught in a pileup after the McElrath-Smith incident in Daytona that resulted in a 21st on the night. He will keep his eye on the X Games Real Moto competition upon returning to riding.

After a rough supercross debut in Tampa that resulted in a trip to the LCQ and failing to make the main event, Swoll has rattled off three straight ninth-place finishes since. He told our Jason Weigandt on Monday during an Instagram Live video that qualifying has been his biggest issue so far this year.

“I’ll qualify 20th and then get [finish] top ten when I’m not even riding my best, you know? It hurts me a lot because the gate picks are so crucial in supercross.”

A better gate pick for heats means no worrying through LCQs and better gate picks for the main event. With Hampshire out, Swoll will have to carry the Rockstar Energy Husqvarna team flag solo through the rest of supercross. With several big name riders out, don’t be surprised to see him jump into the top five one on the results page at one of these events.

Other riders to note:

Crown suffered a broken collarbone and a concussion when he clipped a triple into a 180-degree turn during the Atlanta Supercross press day ride. He is still dealing with symptoms from the concussion and will not be racing in Salt Lake City.

The JGRMX/Yoshimura Suzuki Factory Racing team announced last week that Jimmy Decotis would not be returning to supercross to focus on his health. On Tuesday, The Rippa announced he was stepping away from racing in order to put his full efforts into his recovery from Lyme Disease.

“I have tried everything in my power to remain healthy while pushing my body to the limits but unfortunately it has caused my health to decline to a point where racing dirt bikes just isn’t in the cards for me at this time. ...I’m stepping away from racing for the time being to focus solely on my health and to hopefully get back to the person and racer I was once.”

Pierce Brown is another supercross rookie, but we only got to see him race twice after an injury kept him from the first two rounds. His debut in Atlanta was hindered by a hard crash into the face of a triple takeoff. He finished sixth in the Daytona Supercross only a week later. With his ability and a handful of riders ahead of him in points not racing, Brown will look to get a breakthrough result in SLC. Like Marchbanks, he hails from Utah, so we'll see if a fanless race at home serves as a boost.

Justin Starling confirmed he was parting ways with the FXR/Chaparral Honda Team and he had rejoined the Gas Monkey Energy/AJE Motorsports team. This is not 2019, nut Starling is back with his old team.

Before Starling parted with the FXR/Chaparral Honda, Jerry Robin parted with the team himself and began his own program with Jeff Walker. Robin has since scored a Husqvarna that he will use for the rest of the championship.