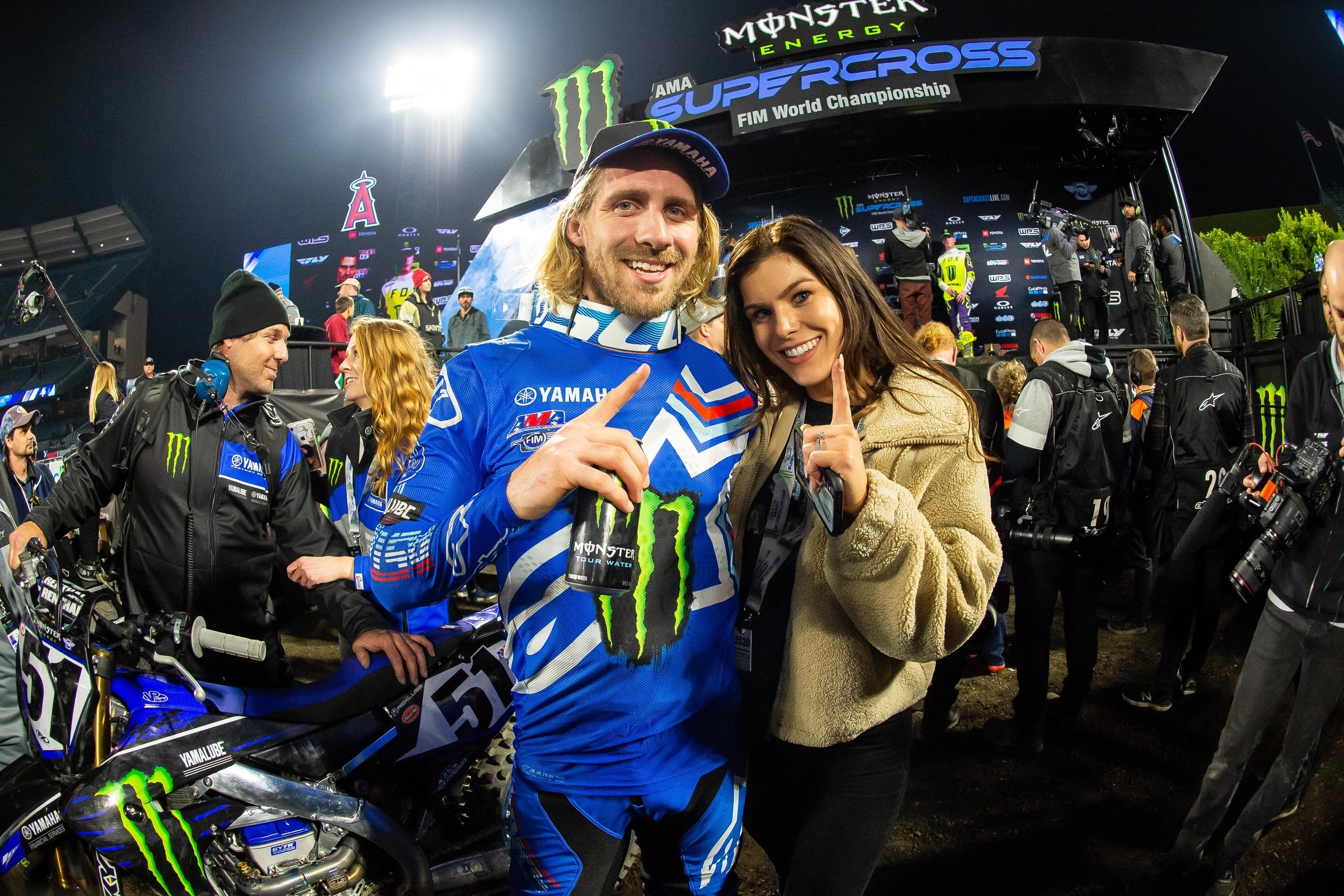 One month ago, virtually to the day, this writer phoned up Monster Energy Yamaha racer Justin Barcia and asked him how he was riding out the pandemic lockdown. “I’m in Florida, man,” offered a then sorrowful sounding Barcia, obviously bored out of his skull. “Just been at home. I’ve just been going from my house to the track. It’s all pretty much completely locked down so nobody can go to the track or go anywhere. It’s pretty much just me and parents. You know, honestly, we’ve just been super to ourselves. I haven’t seen anybody and haven’t really talked to anybody since Daytona.”

But as of this weekend, the 2020 Monster Energy Supercross Championship is about to get back into gear, starting tomorrow afternoon inside Salt Lake City’s Rice-Eccles Stadium for what will be round 11 of the ’20 450SX title brawl. That’s a very good thing for Justin Barcia. Immediately after the running of the Daytona Supercross last March, Barcia held down fourth in points. His ’20 season beginning with a big win under the lights of Anaheim’s round 1, Barcia, 12 years into his professional career, followed that with a very strong second at round two of the series at St. Louis. And on it went, top five main event finishes becoming the norm, Barcia averaging a 4.3 finishing position. Up to speed, controlled and displaying surprising consistency, Barcia truly was a part of the 2020 flying foursome that also included Tomac, Roczen and Webb. At 31 points down, but facing an unprecedented stretch of seven races in three weeks, there are enough variables for anyone within a certain range to be considered a title contender. Even the GOAT himself, Ricky Carmichael, has pointed out Barcia’s potential to win come Rice-Eccles Stadium tomorrow afternoon.

“Whether it’s to Eli Tomac’s or Ken Roczen’s benefit, there are a couple of riders that can really get in-between one another here in Salt Lake, so it’s going to be exciting to see just what guys are going to take advantage of everything that has went down and the opportunity to come out and excel,” explained Ricky Carmichael on Friday night. “For instance, can Justin Barcia come out and get another win and his second win of the season?”

Well, we’re all about to find out. Stoked to get things going, as well as to get a current lay of the land around Rice-Eccles Stadium and Salt Lake City, on Saturday morning we caught up with Barcia, who is operating out of a campground in the vicinity. Animated and in good spirits as always, it was quite evident that Justin Barcia is happy as hell to be back at it!

Racer X: Okay, Justin Barcia phoning it in from the outskirts of Salt Lake City, Utah. All good?
Justin Barcia: Yeah, I’m out here in Salt Lake City and just doing some training before the race and I got to ride a little today, which was cool. Yeah, man, same old stuff, just different. It should all be interesting. Yeah, it’s all been pretty crazy. I was in Florida two weeks ago or something and just training and doing the same stuff and the team called and said, “Alright, we’re going back to racing and we need you to come out here to California in two days.” It was kind of crazy. Me and my wife and the family packed up the motorhome and I found my driver to drive it out and we came out to California and did some testing for about a week and half. From there, I’ve been out here in Utah for a few days and just getting settled, but yeah, things happened so quickly, it’s crazy.

Yeah, it was like a shoe dropped, huh? When you and I spoke last month while you were back in Florida, man, it seemed and felt like we were going to be locked down for an eternity, didn’t it?
Oh my goodness, for sure. It was a little difficult, I would say, but luckily for me, I was already in a really good position. I was already training and preparing. We rode here in Utah yesterday at a place called Flying Iron Horse Ranch. The Star Yamaha guys got the invite out there and I was able to tag along. There were a few Pro Circuit guys and I think I saw some Honda guys out there. There were quite a few people out there. Man, the scenery out here in Salt Lake is incredible. I love mountains because I grew up in New York. Anytime I get to see some mountains and green and trees and things like that, it is awesome. Florida is so flat and California is usually pretty dry, so the mountains get me excited. I’m kind of stoked that the races are going to be out here and we get to spend some time out here riding on a few different tracks. We get to go back racing, which is just awesome.

So what will be your setup while in Utah? Will you base yourself and work out of a motorhome as you go from one race to the next?
Yeah, it’s good. I’m happy with it. We were able to pack up pretty much all of the stuff that we needed and shipped the motorhome out. We’re just at a campground. It was funny because about two days ago I saw that a whole bunch of other top riders started pulling in here too, so there are a few of them here in this campground. We’re about 10 or 15 minutes down from the stadium, so I think things are going to work out pretty good here. I’ve got my little RV gym all set up, I’ve got my Scott bike, I’m excited. To me, it feels like the Tour de France in a way. It’s like everything is sort of in one place and you’re in it for the long haul. I’m curious to see how it plays out with the altitude and things like that and how it affects people’s conditioning and all that. I don’t know… To me, this is the most excited I’ve ever been to see how everything plays out! I just feel like that for me, I’m in a really good position, so I’m excited.

Have you been over to Rice-Eccles Stadium at all? If so, what’s that all look like?
Yeah, so about two days ago I went by the stadium at about 8 in the morning and they were doing testing there to make sure you didn’t have COVID or anything like that, so I got that test done. From there I had to wait 48 hours. Today, I went to the track and picked up my new credential and a wristband that you need to get into the stadium because they have to take your temperature and all that. It’s so crazy. The semitrucks don’t even go to the stadium until tomorrow. Everything is pretty strict and it’s going to be quite crazy.

Going back to Daytona where you placed fifth, you were very much in the mix for the title before time got called on the season. You won a race, placed second in two others, and have been right there in the top five on any given Saturday night. Come tomorrow afternoon, I’m thinking you’re going to be confident in your chances. I mean, like you told me back in March, your season got cut off.
100 percent. I mean, I was in a really good spot and I was having really consistent races. I got that first win of the season out of the way at Anaheim. I want to win more and I know I can win ore, so I’m in a good position. Honestly, I may have pressure, but I’m not putting any pressure on myself. I know what I can do and what I’m capable of, so that’s just what I’m going to do. At the end of the day, that’s what I want to do. I know I can do it. This whole break was really great for me. I built some more fitness and have gotten mentally prepared for this thing. It’s definitely going to be fun and exciting to see. There are just so many new things thrown at us that it’s just going to be somewhat difficult. A lot of guys are going to handle it all in different ways. I just hope I can adapt to it all better than the rest of the guys.

What about seven races in the same stadium?
Obviously, this has never happened before. I remember being a kid, and all this brings me back to my childhood a little bit, and racing at the Mini O’s or at Loretta’s and you get on the streak or that roll of having a great feeling and, for me, I think that could be something very possible here. You get that good feeling and you get that good vibe and you adapt to the track and the stadium. I think you go out, you kick butt in that first race and you just carry that momentum through these last seven races and the next thing you know it’ll be over with. I think it’s going to go really fast, but I do think you’ll be able to build momentum right off the bat. The first race weekend is going to be one of the most important.

Hey, seven races to run and only 31 points out of the lead, with a little momentum, luck and the wind blowing in the right direction, so you think you could still potentially win this thing?
Yeah, 100 percent. You know, I didn’t really think about where I was at during the break, but I knew that I had a real good season going; the best that I’ve had in a while. Now, being thrown back into this racing now, if I go out there and do what I need to do, I’m going to be in this fight. I’m still in the fight and I’m not that far out. I know they always like to talk-up the two big dogs or whatever, but going into Anaheim I was kind of the underdog and now I feel like I’m in that position again, so I’m just going to go out there and do what I do.