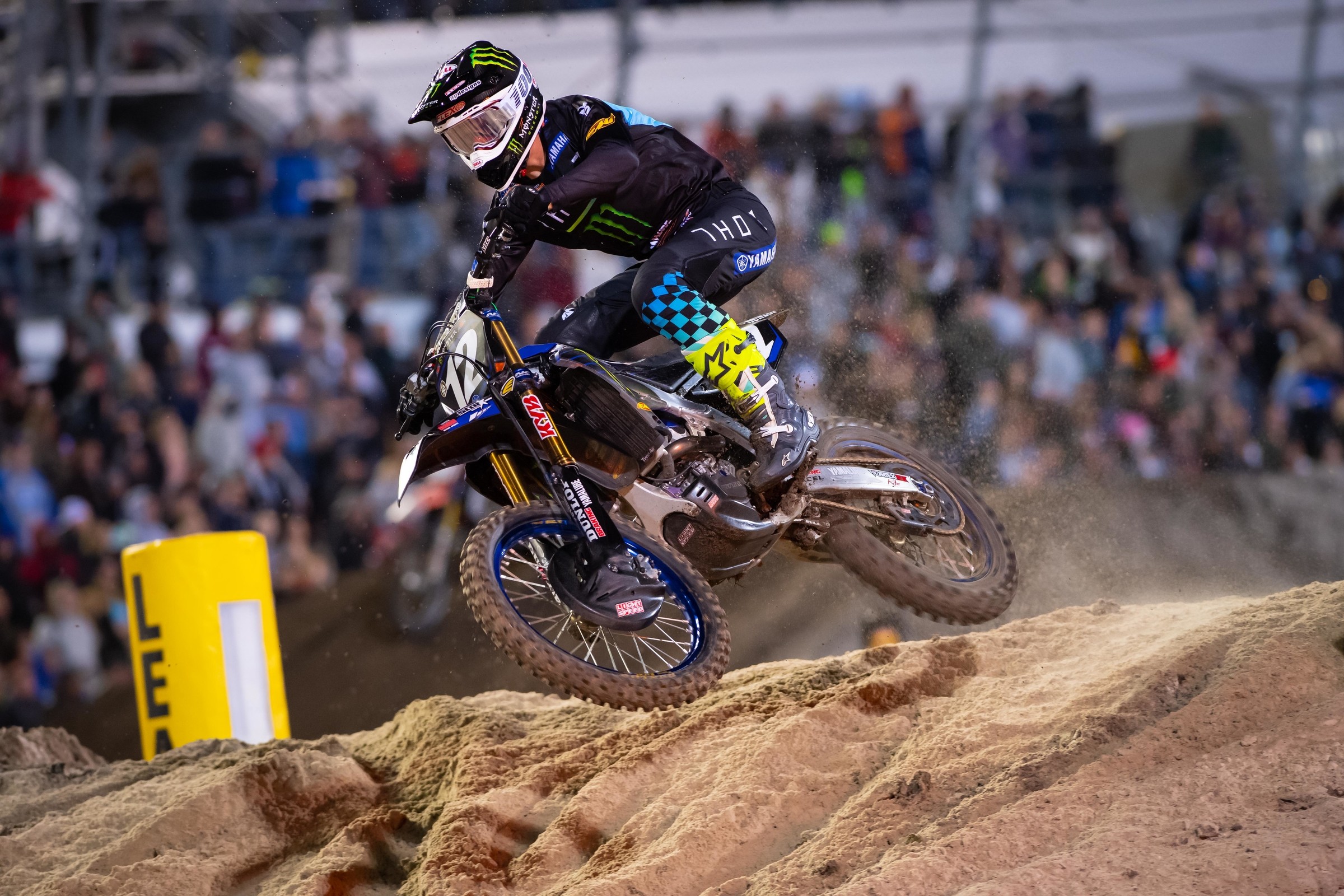 Near the end of April, Feld Entertainment posted a Zoom meeting where NBC color commentator Ricky Carmichael interviewed with the top five riders in the 450SX points standings and then NBC sideline reporter Daniel Blair interviewed the top three riders in both the 250SX West and East Region points standings. With the United States on lockdown and live sports unable to happen during this time, the NBC commentators got to interview riders for their thoughts on the situation. GEICO Honda’s Chase Sexton (98 points), Monster Energy/Star Racing Yamaha’s Shane McElrath (88 points), and Rockstar Energy Husqvarna’s RJ Hampshire (80 points) shared their individual situations with Blair.

Like the majority of the supercross competitors, Sexton, McElrath, and Hampshire all kept riding and training when the Indianapolis Supercross was canceled because they weren’t sure how much of the championship would be affected but the COVID-19 situation. But the situation escalated each day and eventually the championship was postponed. Without races on the calendar, all three backed down the workload.

“Right now it’s weird not really knowing what I’m training for,” Sexton said on when the supercross championship would resume.

There is currently a chance supercross resumes on May 31. Lucas Oil Pro Motocross could begin July 4 weekend. Nothing is certain, though.

Sexton now stares at a fork in the road. The 20-year-old is in the lead and looking to claim the 250SX East Region title. He will also be making the jump to the 450 Class of the Lucas Oil AMA Pro Motocross Championship to join Ken Roczen on the Honda HRC team. When the shutdown happened, he had recently started testing with the team so he could be prepared for the premier class. The uncertainty of knowing for sure what’s next adds another layer to the unprecedented times.

Had COVID-19 not come about and impacted the supercross championship, Sexton would have went on to test the Honda CRF450R during the 250SX West Coast rounds, raced the remaining 250SX East rounds through the Salt Lake City finale, then be fully committed to the premier class for outdoors.

“I want to learn and grow as much as I possibly can,” he said on debuting in the 450 Class.

Watch Sexton's first day of testing on the Honda CRF450R in the episode of Red Bull Moto Spy below:

His mindset is on securing his second straight 250SX East Region Championship. One year ago he claimed the title at Sam Boyd Stadium in Las Vegas, Nevada, but said he didn’t win it the way he wanted to. After overtaking the championship when Austin Forkner went out with a knee injury, Sexton’s plan was to come into 2020 and dominate the East Region from the get-go, leaving nothing in question this time. Right out of the gates in the first main event of the year in Tampa, Florida, McElrath blew everyone’s doors off as he cruised to the victory. Sexton wasn’t thrilled on taking second. He didn’t want a replay of what happened last year. So he went back to work. The GEICO Honda rider bounced back with two straight wins at the Arlington Supercross Triple Crown (finishing 2-1-2 for first overall) and the Atlanta Supercross before another second at Daytona International Speedway to first-time winner Garrett Marchbanks.

“Obviously last year I won, but like I said, it wasn’t the way I wanted to do it,” Sexton told Blair. “And this year I put a lot of focus on trying to go out there and being as dominant as I can because this is my last shot at it. And I just feel like from last year to this year the experience, like you learn so much in a year and then being able to go a whole off-season and put it back into another year of racing. I think has helped me a lot and just finding that confidence was a big thing for me.”

Sexton recently started another boot camp to ramp back up to speed for when racing will resume again, and when it does, he has no doubt he’ll be able to resume the momentum from before the unexpected break.

With the unknown timetable on racing, Hampshire decided to take the opportunity during the break to have surgery to fix a torn ACL that he suffered in December and had been riding through. He said the main priority this year is supercross and the injured knee would be tough to ride during outdoors. At the time, there were rumors that supercross would resume after motocross in the fall, so Hampshire opted to get the knee fixed in hopes of making it back for supercross, but now that schedule might have changed.

Hampshire told Blair that being at home after the surgery, unable to do much physical activity, he was enjoying the time with his wife and baby daughter. But when it came to his diet, he was less cautious than usual, especially when it came to ice cream.

“Tell Aldon it’s all swelling in your knee,” McElrath joked with the group.

But Hampshire said post-surgery his knee has progressed quickly as he was able to get back in the gym shortly as he was doing cycling exercises less than a week after surgery.

Sexton said during the break in racing and his training, he enjoyed himself several cheat items himself.

“I was still training normally and eating normally and then once we found out, I kinda went off a little bit of a deep end,” Sexton said. “I started riding again on Monday, and my sag was like super low and my dad’s like, ‘What have you been eating?’ and I’m like, ‘Uh, I don’t know.’ Yeah I was definitely cheating a little bit but yah I gotta get back down to my fighting weight a little bit. I’m a heavier person anyway so can’t be cheating too much anyways.”

For McElrath, his routine hasn’t been altered much from what it normally is. His diet has not changed much since the Monster Energy/Star Racing Yamaha team has a nutritionist that prepares their meals. He’s been putting in the laps at the practice track and working on his fitness at home with workouts and cycling rides—including a 100-mile stationary ride he recently did from the confines of his home. He has picked up some chores around his apartment and he’s keeping busy with virtual Bible study meetings, but he mentioned taking things slow so he doesn’t run through the list of things to do in one day.

“It’s really hard to tell right now, but going forward there’s going to be some challenges that probably none of us have never faced, especially during supercross,” McElrath said.

He has been working with his wife, Joy, adapting their schedules together to accomplish the things on their individual to-do lists, and his takeaway during this shutdown and social distancing is that we are all going through the same thing and can work with one another (just as long as it’s six feet apart!). He too, is ready for the next gate drop.

“It’s hard right now as an athlete because we want to be there maybe more than the fans want to be there,” McElrath said. “Just letting people know, hey, we’ll be ready when the time comes but right now we’re all in this together.”

As the 250SX West Region riders explained to Blair, Sexton said he believes this off-season type time will come as a reset to the riders. He thinking it will be almost like “a whole new season” where everyone will have had enough time off to come back full recovered and fresh but even faster than before.

Hampshire told Blair said he’d be ready for supercross in the fall, however, rumors started spreading that Feld Entertainment is going to resume the supercross championship at the end of May, prior to the start of the Lucas Oil AMA Pro Motocross Championship. While the video of Blair speaking with Hampshire, Sexton, and McElrath was recorded and posted prior to the plan of supercross resuming at the end of May, Hampshire is now in an unfortunate position. On an Instagram Live video on the Fly Racing Instagram on Friday, Hampshire said if supercross does resume in May, he’s getting the short end of the stick.

“Just been crushing therapy,” Hampshire said about a month since he had the operation. “Honestly hoping that supercross gets pushed back a little bit farther so we can be a part of it cause of right now it’s not looking too great.”

Hampshire said the decision to undergo the surgery when he did was the right call.

“I have no say in this anymore,” he said. “I was pretty bummed when I first heard it because that’s literally why I got the surgery done, so I could be fresh for the second half of the supercross season. And yeah, once they started releasing the dates and everything I was pretty bummed, not gonna lie. But then I just told myself there was nothing I could do. At the time, that’s what I thought was the best decision and kinda our team did also.”

“Hopefully supercross isn’t going [to resume] until September, for my sake, but that’s kinda selfish to say cause it’s good for the sport if they can could go racing now and I know a lot of the industry wants it to also.”

He’s now eying the start of the Lucas Oil AMA Pro Motocross Championship in July, which he said if everything goes according to plan he should be able to race again by then.

“If my knee’s good and we test it out and it’s good to go, there’s no doubt I wanna line up and wanna be back to racing… I’m a racer and you don’t want to miss races and I think that’s the main thing why I’m hoping September is supercross just so I don’t even have to make that choice of going racing with a not-great knee but who knows, we’ll see whenever that time comes. …Let’s just focus on going racing as soon as I can.”