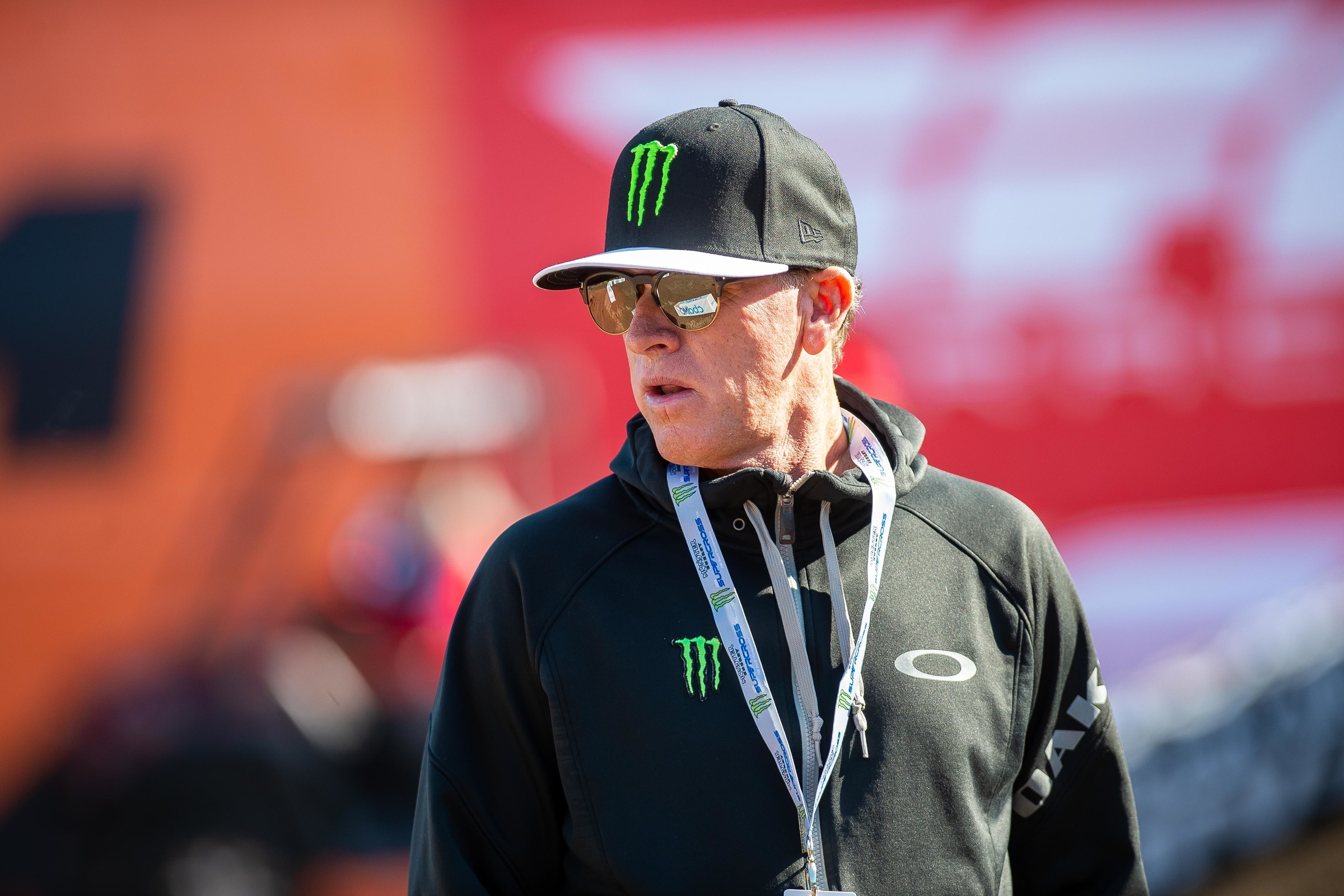 It’s hard to write something about in-our-time supercross and motocross legend Johnny O’Mara that hasn’t been written before. The 1983 AMA 125cc National Champion, 1984 AMA Supercross Champion and winner of a host of the biggest, most important motocross races ever run – the 1981 Trophee and Motocross des Nations immediately come to mind – the native Californian is, undoubtedly, one of the greatest and most admired racers the sport has ever put forth. Upon retirement back in the early 1990s, O’Mara, a full-on training pioneer in the sport, was put together with a small, young amateur racer from Florida named Ricky Carmichael and, well, we all know what damage the dynamic duo unleased on global racing for over a decade. It was O'Mara who worked closed with Carmichael in the early days, and then found a man named Aldon Baker to supervise RC's work down in Florida. (Said O’Mara, “Obviously, Ricky Carmichael and I were really well known for working together and a lot of people will say that we started that really gnarly training deal that we both were involved in. Ricky and I always have that bond. He’s like my little brother. We’re still best friends today.”) And from there came other racers O’Mara waved a heavy hand over, including James Stewart, Ryan Dungey, Jeremy Martin and a host of others. It’s now the second week of May 2020 here in Southern California and on Monday afternoon, O’Mara, an avid mountain bike enthusiast/racer, came peddling up to this writer’s garage in Dana Point. Burning some time off the clock like the rest of us, O’Mara took his helmet off, grabbed a cold bottle of water, pulled up a chair and stared talking about the latest and greatest moto projects close to his heart, namely the Lawrence brothers of Landsborough, Queensland, Australia (and currently Central Florida) and also Joey Savatgy out of Thomasville, Georgia.

“My day starts really early because those guys are on the east coast, so my dad starts at 5 A.M. with communicating with both Jett and Hunter and I also oversee Joey Savatgy,” stared O’Mara, who this author saw win the Mid-Ohio 125cc USGP in 1980. “Joey’s on the mend right now and rebuilding himself for the outdoor nationals later this summer. My day starts early with all of those guys. I balance everything with the two boys and I make sure Joey is good too. Joey’s down RC’s Farm with Jeannie Carmichael. I just make sure everyone is running on all cylinders and feeling alright.”

As we’re all aware of, the 2020 Monster Energy Supercross Championship only made it to and through the Daytona round in March before everyone was sent home to buckle up and hang on for the coronavirus clampdown ride. While Hunter Lawrence was still healing-up from a host of ’19 injuries, supercross rookie Jett Lawrence ran up front in the first three 250SX West races of the new year, nearly pulling off a win in his third start. Meanwhile, Savatgy fought his way through a nasty heel injury. Regardless, the 2020 results have been, in essence, placed on hold, all wondering when racing will return.

“We don’t really have a target date on when we get back to racing, but we kind of know, so we’re still kind of treading lightly on all that as far as workload goes, but we are still staying pretty sharp on our skillsets,” explained O’Mara of his three riders. “That means being on the motorcycles and staying pretty fit body-wise and fitness-wise without overdoing it. Especially for the Lawrence brothers, as I’m pretty sure Joey is going to hold out until the outdoor nationals, where Hunter and Jett are going to ride the west coast in supercross. There might be four races that those guys can do.

“I’m very impressed with the Lawrence brothers,” continued O’Mara. “I knew Hunter from when they packed up and left Australia and went to Europe to race. I didn’t actually feel like I knew him, but Hunter had some ties that you and I would both know. He was the under Stefan Everts’ program. I guess you could say that before I knew Hunter, I was kind of a fan of his and kind of rooting for him and watching him from 6,000 miles away. I didn’t understand everything going on because I wasn’t there personally, but now I know everything that went on. Him and Jorge Prado were just the two best guys and Prado got the best ride with KTM, which was the best ride there was. Hunter wasn’t as lucky in that area, so he was on some teams that didn’t meet up to his standards and maybe vice-versa. Maybe it just didn’t work.

“Switching gears a little bit, I’d always heard about Jettson Lawrence. I’d always hear, ‘Wait until you see little Jett.’ I was just like, ‘Alright.’ He was only 12 or 13 and was just on his little 85, he was already the 65cc World Champion, and Jett was just amazing. No disrespect to Hunter, but Jett was just amazing. The duo, the combination of both of them, I mean Hunter is only 20 years old and he’s got a very bright future. All we have to do is just get him healthy. Actually, Jett has done more supercross than Hunter already, so for us in 2021, the big focus will be to get Hunter back up to supercross speed. He’s naturally a really good outdoor motocross racer.

“It’s a great family,” tossed in O’Mara of Team Lawrence. “Darren, the father, and Emma, the mother, are great. There is another brother in the middle named Tate and he’s just awesome. We all say Tate is our favorite. Tate’s not the racer in the family, he’s the middle boy who supports the other two and he’s pretty awesome to be around. I’ve grown pretty close with the entire family.”

So now what? What’ll happen next? Glendale, Arizona was being hyped heavily as the metropolis and venue to reignite the ’20 Monster Energy AMA Supercross Championship, but that as well has gone radio silent. Perhaps more news is coming. All this withstanding, the O’Show provided his take on just what may come next.

“Yeah, Glendale did go quiet only because I believe they don’t know where they want to race yet. That’s not been announced yet. I do believe that wherever they do choose to race, that’s where all the races will be. There might be two events a week. Yeah, it’s going to be weird. No doubt about it. We’re going to race without fans and then have scaled-down efforts with the behind the scenes people in racing, such as management, trainers, mentors, coaches, managers and all that. I think they’ll only allow one guy, such as a mechanic, to be around the rider on race day. And with TV, I would assume that they can make it all pretty good. All things considered, I think we can all do our work at the highest level because we’re all so focused. Once the gate falls and there is a checkered flag, it’s racing. That should be very exciting for people to watch. It’s definitely going to be different. The world isn’t just going to open up and go back to normal.”

Over the recent weekend, I talked to Austin Forkner, who is back in Oklahoma and riding and training with 1990s racing personality Robbie Reynard. Forkner talked about trying to time things out to where he doesn’t have to burn himself out, just sitting, waiting at 100-percent with nowhere to go for the time being. Upon hearing all this, O’Mara pondered it all for a moment and replied, “Yeah, you can’t go wide open all the time – especially when you don’t have a target date. When you say what Forkner and Reynard said, anybody as athletes would say, ‘Okay, when am I going to compete?’ And from there is a buildup of training volume and seeing how fit that you want to be and then you need to carry that for a lengthy period. The supercross series will be shortened and then we’ll go into the outdoor series, but I don’t think they know how many races that will be as of yet. That’s a little unknown too. Is it an 11 race series? A nine race series? I mean, we’ll see. You always want to do a rev-up and make sure you’re in tip-top shape when the racing begins. I feel like everybody is just doing maintenance right now. Maybe the guys are doing one or two days of riding right now, I would say three or four days would probably be a little overkill right now. Also, a lot of manufacturers have even shut down and there are not a lot of parts available. Even the manufacturer asked us not to put too many hours on that 250F that Jett is riding because there are not a lot of parts available. It’s the same across the board with the Star Yamaha guys and the TLD guys and I’m sure it’s the same with everybody.”

Hitting the dirt in a heap when his bike went into a false neutral at the Australian SX Open last December and sent immediately to an emergency room for surgery, Joey Savatgy of the JGR Suzuki outfit has been working closely with O’Mara to return to racing – whenever that may be – at 100-percent.

“Joey is only on his fourth week of riding,” explained O’Mara. “We’re not holding him back so much because he missed four or five months without riding. Joey is pretty much trying to keep on pounding out the laps and building up his body. We’re not scaling him back at all because we have him in a big buildup period right now. We’re really working on his fitness on the motorcycle.”

Just before the O’Show hopped back on his Specialized mountain bike and began riding towards the Pacific Ocean, he talked about how these 2020 supercross and motocross titles will be remembered in the grand scheme of all motocross history.

“They’ll always be known for this coronavirus,” he said, reaching for his helmet. “One way or another, if you’re the 450 champion, there is going to be a little bit of, ‘Oh, you’re the coronavirus champion.’ Whoever wins that is the true champion of the series, but it’s going to be looked at as the coronavirus champion. But then again, and I’ve thought about this too, it could be one of the hardest titles to ever win because of what has been going on. No one is going to forget this year. Does that make sense?”

Yes, it certainly does.