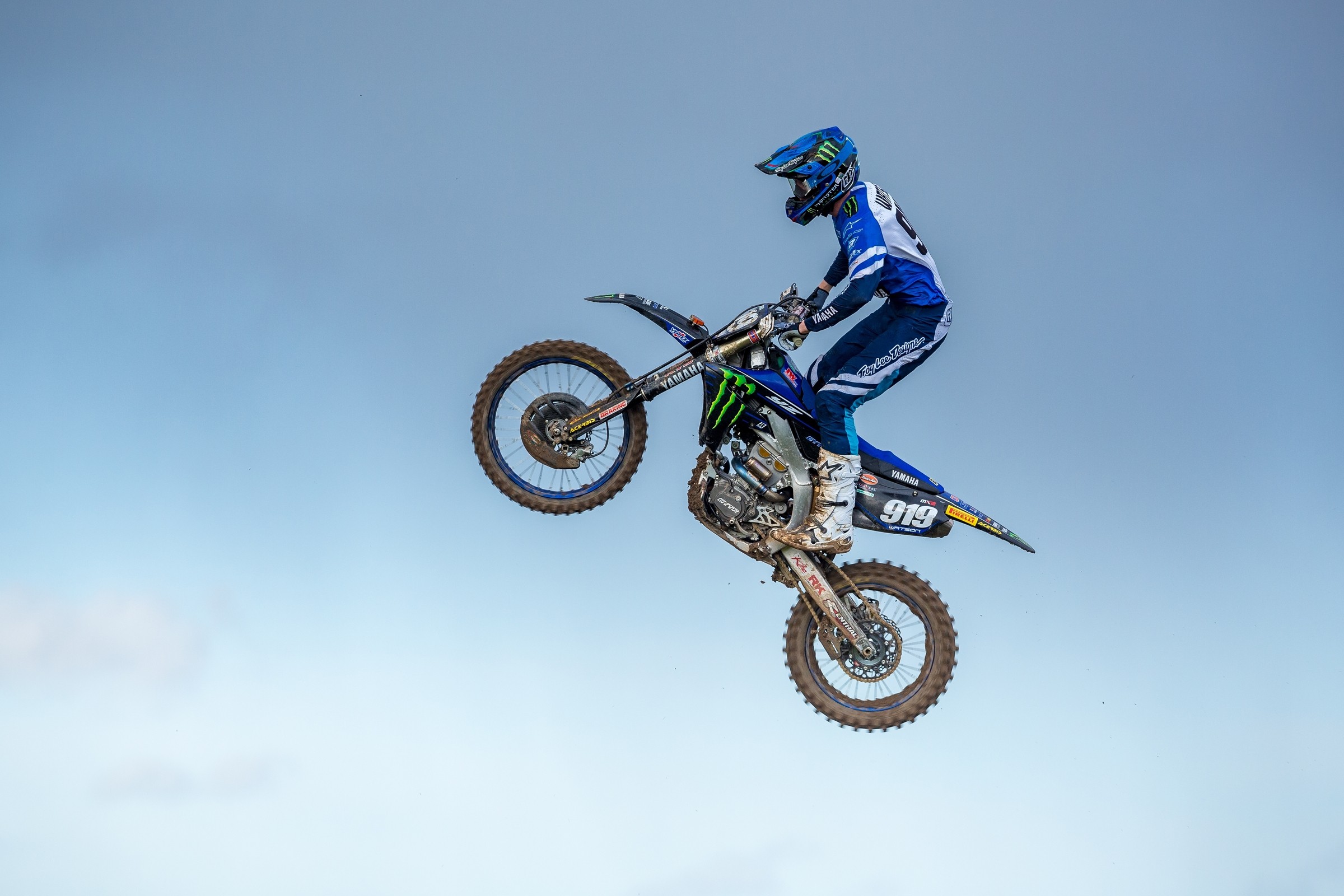 Since the inception of the Federation Internationale de Motocyclisme (FIM) Motocross World Championship in 1957, racers from the United Kingdom have won precisely 10 FIM World Titles: Dave Bickers (1960, 1961), Jeff Smith (1964, 1965), Graham Noyce (1979), Neil Hudson (1981), Dave Thorpe (1985, 1986, 1989), and James Dobb (2001). A great history in the sport if ever there was one, it seems a bit odd that the 80,823 square mile island and the 61 million people who inhabit it, have not put out another world title since Dobb’s 125cc title in 2001. Nearly 20 years onward comes Ben Watson of Nottinghamshire, England. First entering the 250cc World Championship in 2016, within two years Watson was with Yamaha, scoring his first Grand Prix podium in the MX2 Grand Prix of Russia. Watson was a fighting fourth in the 2018 title chase, before suffering through an injury sabotaged season in 2019. As a member of the Monster Energy Yamaha Factory MX2 Team for his final MX2 season, Watson had to endure a pre-season injury, which slowed his prep for the first two Grands Prix of 2020. Since then, the pandemic has sent Watson reeling back to the homeland. We rang him to see how it’s going.

Racer X: Ben, how are you and where in the world are you?
Ben Watson: Well, basically, we only did two races before it all stopped, huh? I mean we had all the testing and winter preparation done and everything went really good and then I had that small hand injury. I cracked two bones in my hand again. It’s really hard to say if it is a new injury or an old injury, so we’ll see how it goes. I missed four weeks on the bike, so it wasn’t ideal before the first race of the season. I placed fifth at the first Grand Prix here in England and was fifth at the second race at Valkenswaard and the whole coronavirus came about and everything has been stopped since. I’m back in the UK at the moment and just doing physical training and actually riding on the bike at the moment. I’m just going to head back to Belgium and start the dirt bike training as soon as I can, basically.

So it was somewhat serendipitous that the COVID-19 clampdown came when it did as it allowed you some much needed time to heal up?
Yeah, exactly. I mean I got back to the point where I was riding through pain and getting ready to fight again and then the virus all came about. I’ve definitely just tried to keep positive through it all and for me, it’s about time to get back to 100 percent again.

At the last 2020 Grand Prix that was run at Valkenswaard in The Netherlands, you scored 5-4 finishes for fifth overall. Even though the coronavirus sent everyone home immediately thereafter, did knowing where you were at amongst the competition provide you with some peace of mind?
Yeah, exactly. I mean I missed a lot of time off the bike before the racing and it was not ideal conditions. In qualifying I got docked up to about 15th position because my bike failed the noise test and a few little things took me back. The starts there are really important and I managed to come through pretty solidly. I just had two consistent races and no real mistakes. I was pretty happy with that. Normally with a long season with 20 races, if you can be consistent with a five and a four and keep building, that’s a good performance.

What have you been doing to burn time off the clock during this clampdown?
I’m at my parents’ house which has quite a lot of land, so I’ve been doing a lot of things outside and have been doing some things that you wouldn’t necessarily do normally, such as working in the garden with my mom and dad and brothers and walking the dogs. When I was in Belgium, I didn’t get to see my dogs so much. I’ve just been doing small things around the house just to kill some time. I’m not really a guy who sits and watches Netflix or plays PlayStation. One thing that is cool is that I bought a new Smart Bike Trainer and I’ve been able to do some indoor cycling and do some races on there. Honestly, it has been so fun and I’ve spent hours inside on that thing. I get my adrenaline going on there. I’ve got one and my brother has got one and we race each other. That’s what I’ve tried to do, really. I’ve just tried to fill the time with things I enjoy doing.

Have you been in close contact and communication with Monster Energy Yamaha Factory MX2 team you compete for?
Definitely. I’m still in contact with the team and although we’re in a different country, we talk a lot. The team guys just need to stay safe. The support is always there from the team and Yamaha, so I’m thankful to have such a good group around me. Yeah, it’s the same for everybody in this situation, I think. We just have to stay positive. What can we do?

One thing that has frustrated a number of racers I have spoken with during the past few weeks is that there is no real race date or start date to shoot for and prepare for. Thoughts?
Yeah, definitely. Normally, we have a real structure and that’s why it’s been tricky. If you’re following a strict program, some days you don’t really feel like doing intense training, but you know you have to do it. Now, I feel like when I’m training, I could do this every day for the rest of my life. I wouldn’t get tired of it.  I’m making sure that I’m getting good training in, but it’s not going to feel heavy for me because it could be five months of this before we get back on a bike. It’s difficult to know what to actually do. I’m just trying to enjoy it as much as I can.

What do you think, will we get back to racing this spring or summer? And if we do, what’s your goal?
I think, yeah, we are going to get back and I don’t think it’s going to be a full season where it is normally 20 races. I’m sure that’s impossible to fit in now with how tight it is all going to be, but I believe a lot of the teams are working together just to try to create a 10-round series or something and to squeeze it all into three and a half months and just try to run the championship. Even if we run into November to the beginning of December, I think the teams will be happy about that, just as long as we get a championship and then we can focus on the next year and still have time to prepare and test. Even if we start in October, let’s say, you still have that same goal and want to be a champion at the end of it. That goal, for me, is the same and it is to become a World Champion and to just keeping fighting for those podiums, and like I always say, make sure I enjoy it.

And this season would mark your last in MX2, correct?
Yes, this is my last year in 250s. I’ll be 23 years old in June and for me, I will also be riding for a place next season, but I try not to think about that. Your riding has to do that talking on that side and I just want to focus on finishing this season out and getting solid results and I think that part of it will come.

Hey, last question and I really wanted to ask you about this. Although I’m 30 years older than you, do you know much about Great Britain’s amazing motocross history?
Yeah, I’m not actually that clued up on racing from the past. I mean my dad was racing and did a few GPs, but I’m not really that knowledgeable about previous riders or anything, but I do know that we get a lot of support from the British fans and they’re especially amazing. They’re always cheering you on at our home GP or the Motocross of Nations. For example, when I raced the Motocross of Nations in America in 2018, there were so many English flags and so many friends I know came out and made the trip to Chicago to follow Team Great Britain at the Motocross of Nations. There always does seem to be a lot of support for us.