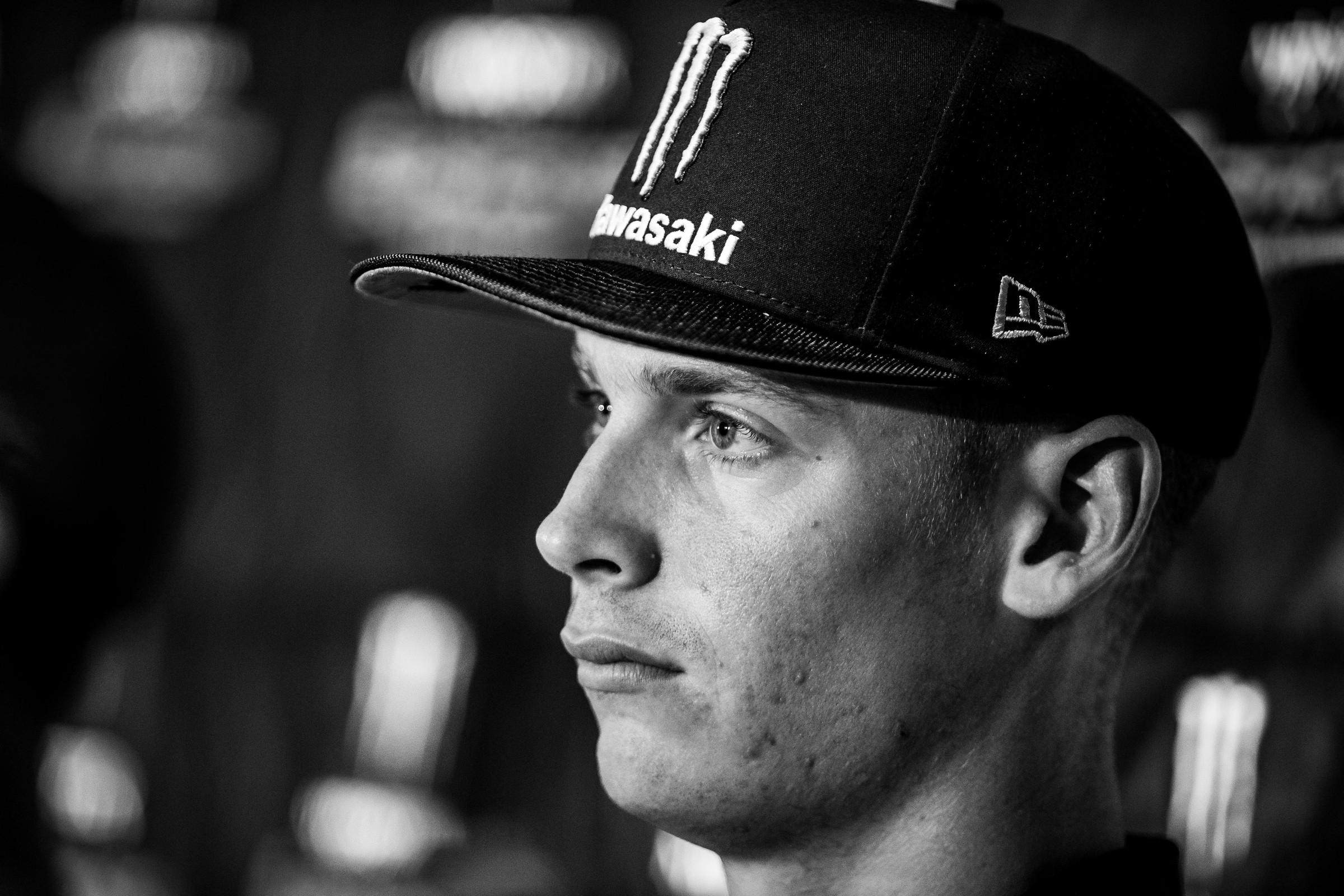 A fortnight after winning the 2019 Monster Energy Cup in Sam Boyd Stadium over in Las Vegas, Nevada, Adam Cianciarulo not only reflected on winning the biggest race of his career, but also what it took to get drafted up and into the Monster Energy Kawasaki 450cc program for 2020 and beyond.

“I can say from a personal perspective that the 250cc outdoor championship would have meant far, far less had I not had to go through what it took to get there,” offered Cianciarulo after the race on the latest point on the curve of his career trajectory. “I’m stoked just to even still be in the sport. So now, Eli Tomac, myself and the entire Kawasaki team are totally preparing for Anaheim 2020. I think for me with this first year on the 450, first and foremost, I want to be at all the races, do all the laps, and just gain experience. I think the challenging part of it—and this is highly publicized—is how long the season is and how grueling the schedule is. Long season, a lot of laps, I think that’s all something that I’ll need to adapt to.

Flash forward nearly three months, seven 450cc main event starts, and a remarkable average finishing position of 5.3 in the 2020 Monster Energy AMA Supercross Championship and Adam Cianciarulo, holding station way down in the Sunshine State, took a look over his shoulder and a trip back to what has been 450cc debut season.

“I feel pretty good about it,” said Cianciarulo is his usual pragmatism. “I think I definitely left some good results on the table, but as I told some other people, a lot of my mistakes came from wanting to win and not necessarily really settling for what would be considered a good result. I was always trying to find the edge, and in a way, that’s kind of what the rookie season is about, right? You’ve got to go through those little learning periods and for me, I learned so much and definitely some things I wish I could have done better. Not that the rookie season is over by any means, but just so far, I think I’m in a really good spot and I definitely think I surprised myself a little bit with how competitive I was able to be.”

And of the coronavirus pandemic and how he’s not only dealing with it, but how he has keeping the clock on the wall from going backwards?

“I know, man…” he lamented. “Currently, I’m on my couch playing that supercross video game [Monster Energy Supercross - The Official Videogame 3]. A lot of PlayStation has been going down lately. It’s fun. I like racing online with everybody. Ever since I was a pretty little kid, I played Call of Duty and all the normal games online, so I’ve always been a little bit of a gamer nerd. I was around for the MX Unleashed days and stuff on PlayStation 2, and so to now be able to race people online on a dirt bike game, is pretty cool, man. I mean look at what everyone is doing with the iRacing with the NASCAR guys and things like that, it has been kind of cool. Technology, man, it’s crazy.”

And the training and sweat equity Cianciarulo has been investing in has also kept things positive and moving along to a better race day.

“Totally. It’s a way of life for most of us and I’ve basically been kind of training like a pro athlete since I was 14, so I don’t know what we can do now. it’s not like we can we go on vacation and kind of shut the mind of and do stuff like that. Everybody is kind of trapped in their house. I’m just doing everything I can to stay in shape, and like I said, I’m actually enjoying it and just waiting for everything to settle down.

“I think everybody is kind of trying to keep to themselves for the most part,” he continued. “You know, do our part and not be stupid and make things worse than they already are. Everybody has been laying pretty low. I know I’ve been spending a lot of time at the house. Luckily for me, we kind of have a solid little group and we’re able to kind of isolate ourselves when we are at the track, so I have still been going to the track a couple days a week. I’ve just been staying loose on the bike and riding some outdoors, but besides that, it’s just like it is for everybody else—just kind of chilling and laying low and trying to make the best of it.

“It’s always a game of training for an event, right? We always have that goal in mind, so now that there is not really a definite, for sure date where we can race, I think everybody is thrown off a little bit. I’ve kind of taken the stance of, ‘I really don’t know what else I would do if I didn’t train. This my life still.’ For me and training, I’m kind of keeping up with it. I haven’t really taken too much time off. For me, I love what I do so much that I would be less happy of a person if I didn’t train and I didn’t do that stuff. I’m taking it easy, for sure, but at the same time, I’m training and actually enjoying it. I guess there is not a whole lot of pressure right now because we don’t really know when we’re going to go racing, but for me, I’m just trying to be ready for that June date for the first Florida National. I think that is the tentative date and who knows if it will actually happen, but I’m going to be ready for it if it happens.”

In 2019, Cianciarulo accomplished a lifelong dream of clinching a professional AMA championship. A sort of catalyst for his impending 450 career, Cianciarulo looks to the potential start of the 2020 Lucas Oil AMA Pro Motocross Championship—currently slated to begin on June 13—as a very good thing.

“Yeah, I mean I would be really happy to race the outdoors come June,” he reasoned. “I would be happy to race anything. Really, I’m already halfway through my rookie year and then everybody basically gets sent to the bench with this situation and that’s kind of tough because I really like being out there with those guys. It’s the same for everybody and everybody is dealing with the same problems and there are much bigger problems in the world, but as far as where we’re racing and when we’re racing, I’ll just be happy going off the gate. I don’t care of it’s in a field and nobody around and racing around a couple of Tuff Blox or something. I just can’t wait to get back behind the gate and feel that competitive fire again.”

While Cianciarulo is in Florida, his close friend, trainer, and moto mentor Nick Wey is riding this pandemic deal out in California. Working together and collaborating via phone and laptop, the dynamic duo has been putting in the heavy lifting in hopes of going racing somewhat soon.

“Nick, that guy has always got me doing the right things and keeps me locked in and focused on improvements that I can make. My health is good and I’m back on the bike and been riding outdoors and this time here has just given me a little bit more time to be patient with it than I would have been otherwise. The collarbone injury that I suffered at Dallas was pretty basic. It’s plated and everything is good. I’m doing everything that I did before in the gym and I’m on the bicycle and the track and everything is pretty much full-bore and ready to go now. Yeah, I feel good about all of it.”

Race pace, competition, aggressiveness, race craft, to AC’s way of seeing things, how does the 450cc classification match up to his recent graduation from the 250cc division? Is it much more frantic?

“I definitely don’t think it’s more frantic,” Cianciarulo answered. “The 250 class is about as frantic as it gets. Obviously, everyone is really aggressive and everybody knows that you have to make things happen. I’ve made the comment before, especially in the 450 class compared to the 250 class, that you can’t settle at all in the 450 class. As soon as you’re not going forward, you’re going backwards. It’s always the mindset of getting the most you can out of it and not necessarily looking to your right or looking to your left and wondering where you are. It’s just doing every lap the best you can. In the last few laps of the race a lot of the passes are made too, so you’ve got to good all the way through. Compared to the 250 class, it’s a lot closer and everybody that makes the main event on the 450 in supercross races is a really, really good rider in their own right, regardless of where they finished. It’s a cool aspect for me just to line up on Saturday nights and know I’m racing the top level that you possible can on a dirt bike. Supercross is kind of the epitome of everything and there is some pride in knowing that you’re out there with the best and I think that’s something that I’ve enjoyed quite a bit. I’m carving out a great career for myself so far and I just need to keep plugging away because I think I still have a lot left on the table to give. I think I really am still getting better week to week and I think that’s going to pay off well for me in the next few years. There are still a lot more pieces of the puzzle to put together, so I think that’s going to be kind of fun the rest of the year and then taking it into 2021, man, we’ll to try and win the damn thing.”