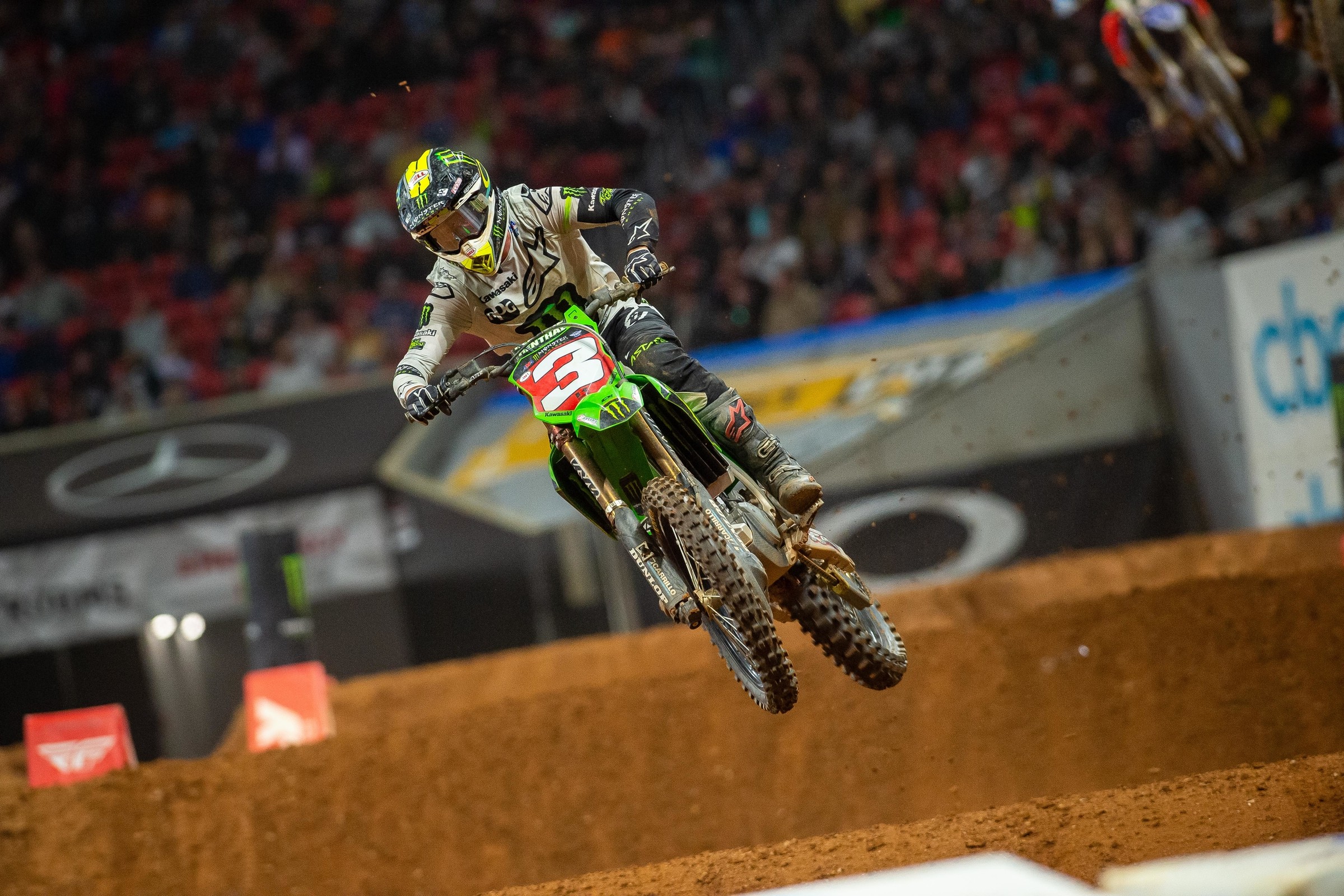 The cliché phrase (coined by Ricky Carmichael in his racing days) is that the series begins in Daytona, but statistics prove otherwise. Only once in the last 20 years has the points leader after Daytona failed to win the championship (Chad Reed was points leader in 2009, but James Stewart won the title. You can uncover more Daytona points leader stats from Clinton Fowler at PulpMX, who discovered only three post-Daytona points lead changes in 30 years).

Further, Carmichael himself can thank his pre-Daytona points lead for some titles, such as in 2003, when Reed won every single race after Daytona, but was already too far back in points to get the championship.

While math and momentum tend to create an obvious championship favorite by the halfway point, the narrative is different this year. Ken Roczen’s big win in Atlanta rendered that script useless. Eli Tomac built a championship case with four wins in the first eight races of 2020, but Roczen snapped that on Saturday, and now they’re literally tied for the series’ lead right now. Tied!

“I’m so happy with how tonight went and stoked to have the red plate again,” said Roczen in a team statement. “The last couple weekends have been tough but I’ve managed to minimize the damage, which was huge for us because it put us in a good position for a situation like today. With all the chaos, we made up seven points in one night and now are tied for the points lead again. The battle continues for the championship.”

Roczen or Tomac will likely leave Daytona as the points leader, but the gap will likely be small, and momentum likely stunted. Expect this championship to remain up for grabs for quite a while.

Plus, it’s not quite a two-man fight. Justin Barcia has quietly kept himself in the championship hunt this year, salvaging points despite bad starts. When he has had the opportunity to battle Tomac and Roczen this year (on nights when they also gated poorly) he’s shown he can run with them. Barcia is in a strange situation where bad starts have actually helped his confidence. He hasn’t won since the opener, but he can leave every race thinking, “That could have been my night if I had just gotten the start.”

GET THE LATEST NEWS FROM ama supercross

Further, in those battles, he and Tomac have made some contact. Bar-to-bar banging is Barcia’s game, and the more Tomac slides into that pattern, the more the scales tip Barcia’s direction.

“I don’t really like it,” said Barcia after the Atlanta Supercross main event. “I made a good clean pass on Eli. If someone hits me so hard it physically hurts me, I’m not happy with it. I thought the pass he put on me was stupid and then he tried to put a pass on Baggett and cleaned him out.”

Barcia was the first to admit he’s done the same many times.

“I think he ran it harder than he should, and I know because I’ve done that before!”

You can make a reasonable argument that Tomac, after bumping Barcia on Saturday night, knew he had to get away immediately to avoid retaliation. He then rushed a pass attempt on Blake Baggett to get some cover, but that pass attempt left him on the ground. If you engage with Barcia, you rarely come out unscathed. Further, Tomac might have made another enemy in Baggett, who is rarely known for retaliation but certainly left Atlanta in frustration.

“It was just battling,” said Tomac to NBCSN’s Daniel Blair. “If I get bumped I’m gonna bump back, that’s the way it is. Mine might have been a little more of a hit, but really, I’m just kind of giving it back. Tight track tonight and that’s what leads to those situations. Really hard to make the pass stick, you had to go inside in the bowl turns. I was in a hurry and Kenny was out front, that was all that I could do.

“The one with Blake, I didn’t mean it to be that bad,” Tomac continued. I thought I had good momentum to slingshot from the outside to in, but he was already coming down. The tight track really makes it hard to make moves, and that was it.”

Tomac is wise to try to keep this in the category of racing incident. That’s all that it was—he had a bad start and tried to make aggressive passes quickly. Unfortunately for him, he has too much history with Barcia and Baggett. These three have raced each other since they were kids. For Tomac, the key is to say this is nothing personal. Barcia and Baggett might not see it that way.

Further, you have Cooper Webb, clawing to a podium a week after what at first appeared to be a title-defense ending crash. Webb is now a wildcard, as it will be hard to predict his level of recovery and preparation each week. He and Barcia also face larger points gaps (24 and 23 points, respectively) than a rider can usually overcome at this stage of the season. However, this season has taken on a different form than those from the past, and with so many riders still eager to score podiums and settle scores, it’s hard to know what comes next. Instead of using history as the guide—we’re looking for some more of it to unfold.