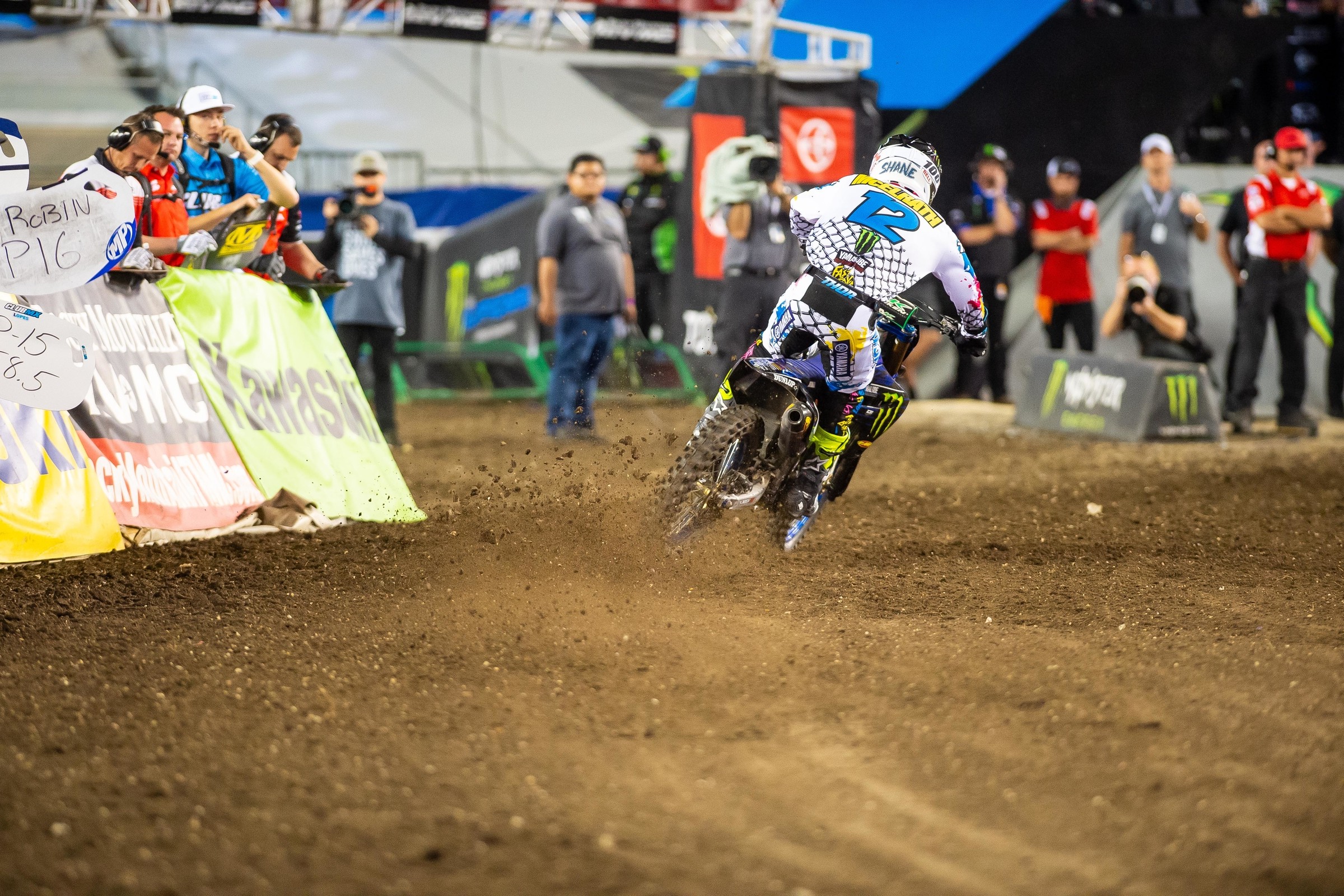 You’d be forgiven if Shane McElrath’s staggering performance in Tampa last week caught you off guard. It’s certainly not a surprise to see him win, he’d won six 250SX races already, but not like this. He was overwhelmingly dominant in Tampa, winning his heat race by nearly 15 seconds and straight up dropping the competition like a bag of bent spokes in the main. Yes, it was the 250SX East opener, so nerves probably played a role with some riders, but they sure didn’t seem to with McElrath. Be warned, he’s going to be dangerous every single night. -Aaron Hansel

It’d be tough to think of a scenario in which Jeremy Martin left Tampa healthy that could be considered unsuccessful. After all, the GEICO Honda rider hadn’t raced a supercross race since May 2018, so you’ve got to think just getting his feet wet again, regardless of finishing position, would be the objective. Well, apparently Martin missed the memo because he was fastest in qualifying and ended up on the box in third place. If he’s this good in just his first race back, what can we expect in Arlington? –Hansel

If you’re looking for an example of a career in the midst of a rebuild look no further than Justin Hill’s current effort. The SmarTop/Bullfrog Spas/MotoConcepts Honda rider has been solid and disaster-free all season, and has steadily climbed upward as the races have progressed. Last week in Tampa was his best outing yet; Hill ran as high as fourth before getting zapped by Justin Barcia on the final lap to end up fifth. It’s the best 450SX result of Hill’s career, but given his current trajectory it might not be for much longer. –Hansel

It’s a good thing Rockstar Energy makes a “Recovery” category of energy drink because right about now Jason Anderson could really use some. The Rockstar Energy Husqvarna rider has had a rough last couple races—he got parked by Justin Brayton in San Diego and was penalized two spots in Tampa after cutting the track. Yes, he started it with Brayton in San Diego, and he should have been smarter in Tampa, but even so, a former champion doesn’t belong in 14th (SD) or tenth (Tampa). Look for a rebound ride from Anderson in this weekend’s Triple Crown. –Hansel

You probably know Dean Wilson came into the season nursing an injured hip suffered at the 2019 Monster Energy Cup, which made racing to his potential impossible. But Wilson stayed optimistic, saying his results would improve with his health. Well, he must be feeling better because he took a big step forward in Tampa, where he nabbed sixth, his best result of the season. Next up is the Triple Crown, a format Wilson strongly dislikes, but with momentum on his side we’ll see if he uses it to earn his best result yet. -Hansel

On Thursday, our Jason Thomas previewed the Arlington track and noted how entire sections of the layout resemble the 2007 St. Louis Supercross. That’s not a bad thing, because that ’07 race was pretty darned exciting, including a Chad Reed/James Stewart takeout fest in the short 180-corner before the finish. Chad and James running into each other? Shocking! The section sets up more drama for this weekend, with a long run down the start straight leading into a tabletop and a 180. Right before the finish! You can expect, at least, some action in the daytime LCQs, and quite possibly more in the Triple Crown races at night. -Jason Weigandt

Whoops have been a much bigger factor at the races this year, and even the short set at Tampa offered some separation through the pack. The Arlington track offers a long set followed by a 180, so the chances to make a pass are high. Who will have the stuff to get it done? Back in the day, the Dallas/Arlington races were known for hard dirt, which meant whoops that held up. Lately, the dirt has been softer. Last year’s whoops where all jacked up by the last lap, opening the door for the famous Cooper Webb/Ken Roczen showdown to the finish. This year's whoops look crazy--a post by the track builders on Instagram indicates this will be the longest set of whoops of the year. The race very well could be won and lost right there. -Weigandt

With the Triple Crown format back for the second time this year, as noted by my colleagues above, that presents a challenge most riders dislike: Lots of starts. At the first round of the Triple Crown in Glendale, we saw a lot of first turn carnage including two red flags that resulted in full restarts for a total of five starts for the 450SX boys. Sure, they also normally have to at least do a heat race and main event start in a normal format but having the best 22 guys take three gate drops together can often mean a little bit closer action into the first turn. Look for some added friction in both classes, because the short main events often require good starts and quick passing. – Kellen Brauer

Sometimes weird things just happen. For just the fourth week of his career, Eli Tomac has the red plate in Supercross. Some would argue his 12th-place finish at Arlington last year took him out of championship contention, as he had just lost the red plate the week prior in Minneapolis. Three years ago, Tomac had a front brake malfunction in the main event at Arlington that led to a finish of 15th. He won here in 2018, but that marks his only podium in AT&T Stadium. in five 450SX starts. Tomac’s recent trend of success might suggest his 2018 ride could be repeatable this weekend as he looks to put the past troubles here behind him. -Brauer

Cowboy boots are practically synonymous with Texas and this track could provide some boot sliding. Though there are five 180-degree turns on the track, it’s likely two of them will be flat corners or at least ones where the inside will be the primary line. Couple that with a couple tricky, 90-degree turns and the classic loose top-hard bottom soil we see at Arlington and there could be some front wheels tucking. When the soil is richer and produces some deeper ruts, you’ll often see riders keep their legs up on the shroud in turns to keep their feet from catching. Look for guys to have their feet planted more towards the ground in the flat turns to keep their balance in the event of a low side. -Brauer