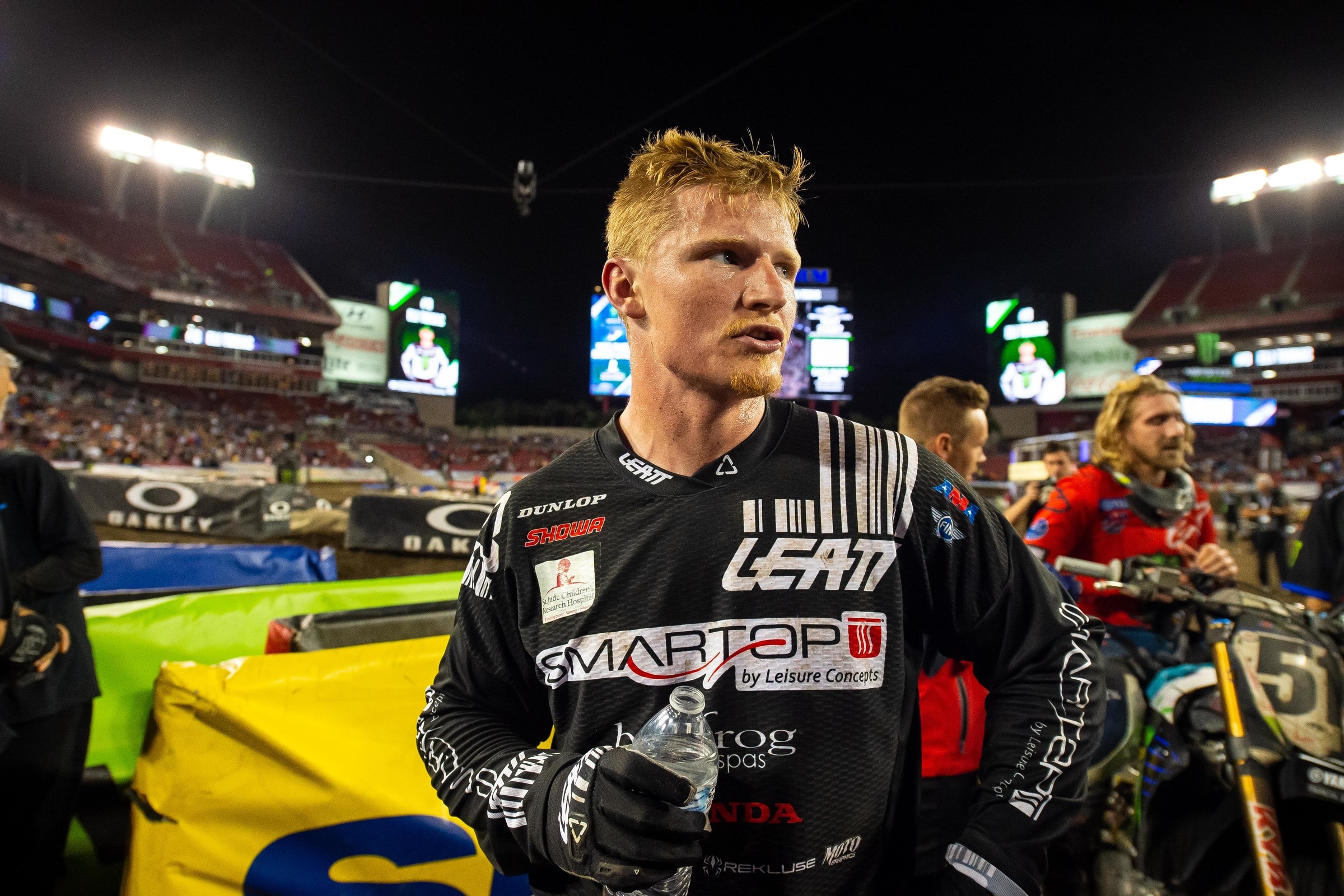 “The 450 really suits my style,” is on the all-time podium for most uttered phrases in the pits, probably behind only, “This is the type of track where you really need to get a good start.”

No one spoke the 450 gospel louder than Justin Hill, who maintained over and over that, even with a 250SX West Championship, he wasn’t a 250 rider. When he first got his chance on the big bike, he looked right.  On a scintillating night in Tampa in 2018, he actually passed Marvin Musquin and Eli Tomac and looked ready to battle for the 450 main event win. He later tangled with Marvin and crashed, but he had at least made his 450 words look true.

Until his actual rookie 450 season, which was not good at all. I asked Hill about that this weekend in Tampa, site of that amazing night two years ago. It’s taken two years to finally eclipse his result from back then.

“Here two years ago it looked like a win, then I crashed, and sixth,” he said. “So this was better than that on paper.”

That Tampa 2018 race, and all of Hill’s 450 talk, tempted us to believe Hill could be a 450 podium guy quite quickly. He’d throw in some fast qualifying times on occasion, too, but it never materialized into results. Once again, we’ve learned that no matter who you are, it takes time.

“Just bumps in the road. Big pot holes,” said Hill, who rode the best end-to-end race of his 450SX career over the weekend, notching fifth in Tampa. “I’m an old-school guy, and I don’t go too crazy off one end, and I don’t exercise every little thing in the world to try to get that edge. I’m old school. I just work hard and I ride hard. So maybe in that sense, it does take me more time? But, at the same time, once I get it, I’m rock solid. Like in the 250s, when I stayed healthy and I got the hang of it, it was like ‘Oh, okay, this guy can really do it.’ That’s where I feel like I belong on the 450. I felt like I belonged tonight. I was trying to chew those guys up as best as I could.”

To really figure this out, Hill had to park the fast-lap sizzle reel and focus on the foundation. He’s been solid and consistent, but not spectacular, through the early stages of the season.

“I really needed that,” he said. “It was a wakeup call, to me, to go, ‘You’re better than this. You’re better than what you’re doing, you need to stop doing these things.’ Little mistakes, or little things that I thought would work. What lines I picked on the track, or maybe not listening to Tony [Alessi, team manager] about what gate I should pick. Every time I listen to Tony on what gate I should pick, I get a good start.”

As Hill has learned this about himself, he’s learned about his new team. The off-season can prove things about the motorcycle, but at the races Hill is learning to trust in the advice from his team manager. Perhaps Hill had so much confidence coming into the 450 ranks that it took some time to start pulling other solutions off of the shelf. Old school nose-to-the-grindstone sounds noble, but there are solutions right over there. Hill is using them.

“I’m telling you, we have a solid program with the machine, the crew and him [Alessi],” Hill says.

Now that he’s put building blocks in place and has taken advantage of the knowledge around him, Hill brims with that old confidence. Especially since the eastern races in the championship might offer what he likes, which is a hammered, tortured track that requires some creativity.

Hill will relocate to his old house in North Carolina (which he purchased when riding for JGRMX/Yoshimura Suzuki) for a few weeks. His plan is to ride with his brother, Josh, down at ClubMX, in the search for ruts and softer soil.

“Get on a track that’s rough, ruts, chewed whoops, just gripping the bike,” he says. “I think that’s going to go miles for me.”

For about 18 months, any talk from Hill had not been backed by action in the races. His strong start to 2020, and career-best 450 finish over the weekend, shows the words could start to prove true before long.