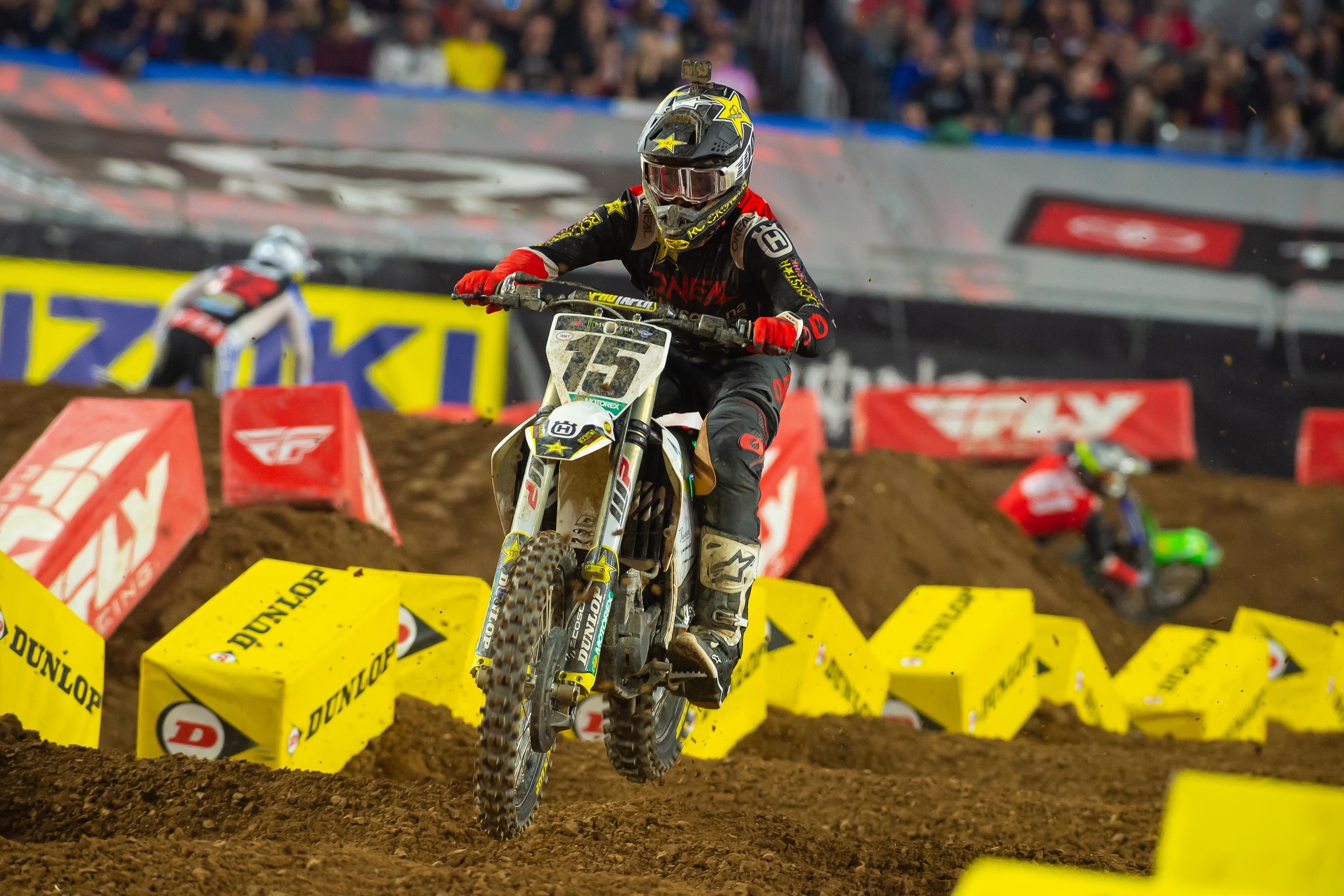 Between Hayes and Wilson

As he’s told us before, Gas Monkey Energy/AJE Motorsports’ Jacob Hayes came into the year banged up. He came into Anaheim 1 without as much preparation as he had wanted and managed an 11th in the 250SX main event. While a majority of eyes have been focused on the top tier factory riders in the class, Hayes has been putting in solid results inside the top-ten. Hayes himself, as you’ll read, said he was fine coming into the year without being a focus point because he wants to let his riding and results on the track do the talking. Hayes said he was excited on the Glendale track and the Triple Crown.

Rockstar Energy Husqvarna’s Dean Wilson is also working towards returning to full-health. Wilson has finished 13-13-10-13 in the first four rounds, respectively, but following the race he said he’s not fully healthy yet. He also commented on the Triple Crown format from a safety aspect.

Our Aaron Hansel caught up to both riders following the night show.

Racer X: You were looking more comfortable out there.
Jacob Hayes: Thanks. I knew I was coming in underprepared and under the radar, which I was okay with. I just wanted to get better each week and I made Phoenix the round where I wanted to have a breakout ride and I think it showed all day. Free practice I was on the board, first timed practice I was on the board, and qualified P6. I was in the hunt. Practice is practice, I get that. I was super excited for the Triple Crown. I loved the track too, and I was excited for it. This place is so sick. I don’t know why I like the bigger tracks, I just do.

The dirt or the speed?
Both. And I love long whoops. I walked the track and I was like, “This is gonna be fun!” I executed a good start in the first one, almost pulled the holeshot, and I got sixth. From there on it was just making sure I continued to get good starts to put myself in a good position, and I did that. I went 6-5-5 for fifth overall and my speed was good, I was able to kind of get in the mix tonight. I battled with my buddy Brandon Hartranft, that was fun. We were joking in the pits and talking [crap] to each other. I had a good time and I think the progression moving forward was good, and I want to keep doing it.

I think I aged 30 years just stressing on the line about getting a good start. I think that’s more or less why the Triple Crown is so stressful. You have three chances to not only get a good start, but to mess up. Everyone knows they’re short too, so everyone is going extra hard. For me it was just, get yourself in a good position and stay out of the carnage. The whoops were gnarly and guys were going left and right. But I put myself in good positions, and the bike was amazing tonight. The Gas Monkey Energy/AJE Motorsports guys did a good job.

Dean Wilson: Terrible starts tonight. It’s just so gnarly with this Triple Crown, how stacked the class is, it’s just carnage. Guys stuffing each other, jumping off the track, cross-jumping, hay bales flying, it’s so dangerous being in the back. In the first race I was coming through into the top ten and I got Friese’d super hard before the mechanics’ area for no reason. Just got cleaned out and I was pretty pissed about that. I ended up 15th. Second race, got tenth with a bad start. Third race, I literally don’t even know what I got, I just know I got thirteenth overall, which kind of pissed me off. Obviously it sucks. But I know what I need to work on. Starts and the first few laps of the race. I’m just a little bit timid, but I am getting healthier and I am getting better. That’s why it’s disappointing because I want to be in the mix more. I’m feeling healthier, feeling better, the speed’s better, and the qualifying times are better. Overall I’m feeling better and I want to really start getting up there. I just have to get a start. You get a start and you’re behind Jason [Anderson] or [Ken] Roczen and you’re like, “I can run with these guys,” and everything clicks. I know exactly how it goes, I just need to put myself in that position. I’ll get there I just have to keep pushing and have good weeks before race days and try again in seven days.

Racer X: It seemed like last week was the first week you were close to yourself.
Dean Wilson: I was a bit closer, for sure, but if I can rewind it I think I could have had a top-three start. I’m not feeling confident right now though, I feel like I’m a bit timid the first few laps. I don’t feel comfortable around the guys yet. I’m just not 100 percent, and that’s one thing we need to work on, the intensity the first few laps. It’ll come.

Triple Crown format. Where you at on that?
I said it last year, I think it’s stupid. It’s just so dangerous for us. Like tonight, we had five starts tonight and we had a fifth-gear start straight. I think the racing was good for me though, it was good training for me. But it’s dangerous. It’s so chaotic the first few laps and you have to do it three times, it’s gnarly. Of course from a fan’s perspective, it’s awesome. If I was a fan I’d be loving it, but as a rider, it’s dangerous.