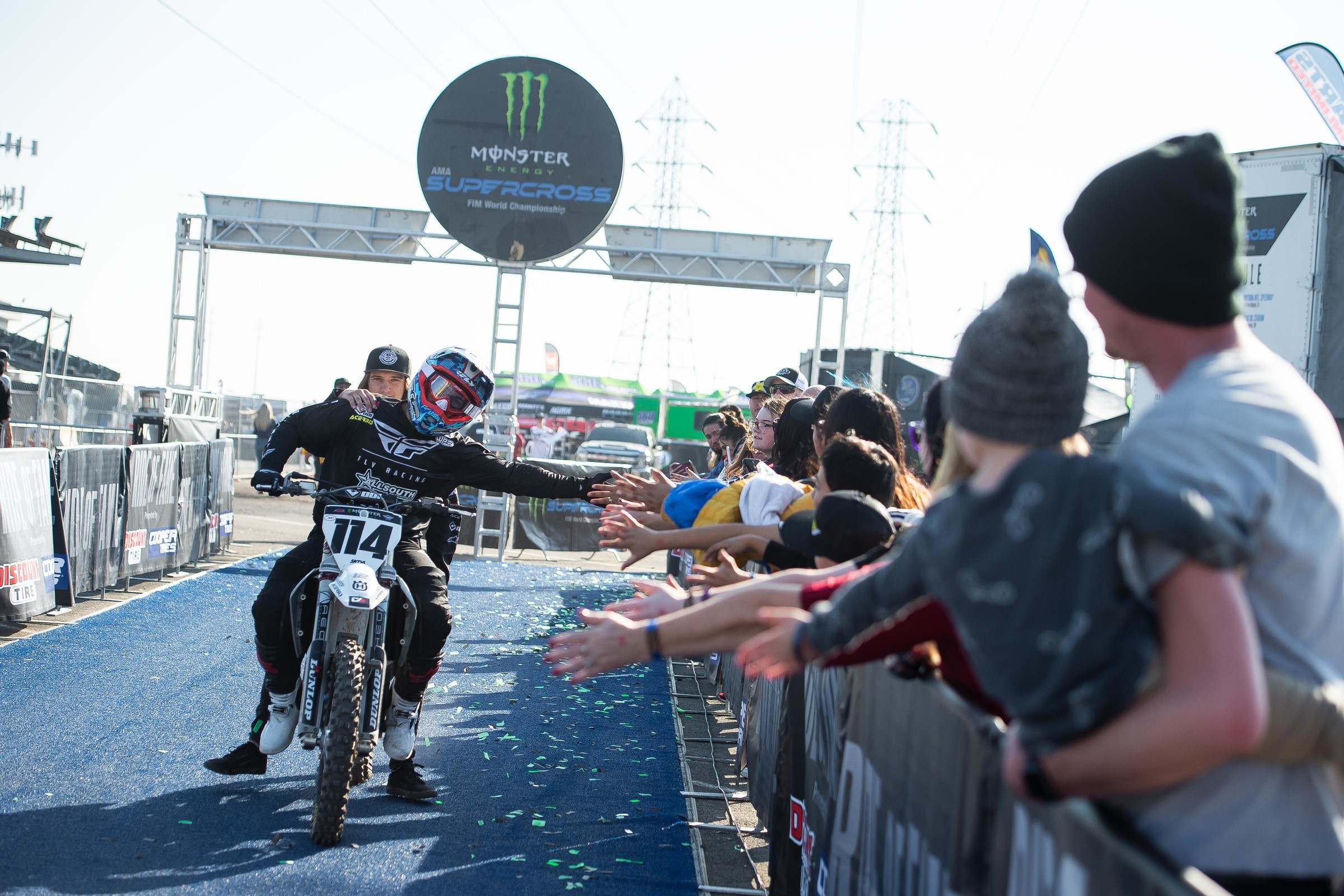 Privateer The Privateer and The Struggle

make forceful or violent efforts to get free of restraint or constriction.

We all have our struggles in life, right? Whether it be at our job, with our families, with our health… Or in this case with racing dirt bikes. It’s 2020 and our sport has changed over the years. The cost of racing is more, there are less rides and then of course we have that constant threat of injuries. Injuries are hard in this sport, not just to the rider who gets injured, but there are family and friends that are also connected to a rider when they get injured. But what about when it’s a privateer? You know, those three-digit guys that are going out there on Saturday nights to fill the gate, so all of us in the stands and at home can play fantasy leagues, make some money, win prizes, curse at them on social media—you know the drill. That guy that is sponsored by a mom-and-pop shop or small business. Yeah, what about that guy?

I am not going to sit here and say that when a factory rider gets hurt it’s less important, but in most cases those riders do not have to think about their immediate finances. I think people don’t stop and realize that most factory riders usually have a little more “cushion” in their bank accounts than these privateers. Racing motorcycles professionally will always be dangerous and the ones that line up on Saturday night know the dangers, but 75 percent of that 40-rider night show couldn't retire off of their earnings from our sport. Which got me thinking… Why are some of these privateers coming back for more, when they know that they're not making enough money?

When I got the call that Colton Aeck (AMA Supercross Privateer) got hurt last week while practicing for the Oakland Supercross, all I could think about was, "Not again!" It also took me back to when I got hurt trying to make it. I thought about the rehab. The mental anguish. The thoughts of hanging it up. Will I be able to get back up to speed? What about my family? Why am I still racing? All of this would go through my head. Colt has been through some gnarly stuff the past few years, with his fair share of sizable injuries, and most of what he has gone through you will be able to see in the “Road To Recovery” Docuseries, that will be up February 12 over on road2recovery.com.

However, what us fans can't see or feel through videos is what it does mentally to these privateers that dump so much of their money into their racing. Most of us can relate to the physical stress of coming back from an injury, but what about the mental stress that comes along with a big crash? What about the blood, sweat, and tears put in the gym, on the bicycle, out on the track, and then have it wiped away with a single bike failure or slight mistake? What about the credit card that is maxed out that you’ll owe on for the next five-six years? No one is forcing these riders to do this and go bankrupt while doing so, but it’s something that most of these privateer riders do because it’s their lifestyle not because it’s their job. They might say it’s their “job,” but don’t be fooled, most of them are not making a middle-class lifestyle racing dirt bikes on Saturday nights. They should be saying, “I am doing this because I want this to be my job, where I can actually make some money someday.”

That is the great debate in the social media world, right? A rider gets hurt, a GoFundMe page goes up and the shit storm ensues. Comments like, “Why should I give this kid money when he could go get a job?” or, “It’s his choice, he should have had insurance.” While I understand the backlash of the GoFundMe era, I still believe in helping out a struggling privateer when he’s doing it the right way. And just in case you were wondering, to me, the right way is to have medical insurance when you ride a dirt bike. We all know that insurance is expensive and doesn't cover everything when it’s time to cover our asses, when we do actually get hurt, so being able to help a rider in need to me is still viable most times as a fan of the sport! I live it through these guys! I was that guy! I’ve been hurt, I know what it’s like! These privateers are the backbone of our sport and if we as fans can’t support them from time to time, when we are able, when needed, soon our Saturday night racing will not be the same! We really can’t rely on the purse money to make these guys whole, so it’s sometimes almost up to us fans/supporters to keep the 12-22nd place racers going and make sure we still get to enjoy the sport we all love so much. Oh, and play fantasy of course.

There are very few who actually make money “racing” a dirt bike. Like, literally make enough money where they can sustain life, put a roof over their head, pay their electric bill, and stash some money into their 401k. Privateers aren't doing this, but they still come out every year and line up at A1. Why? Let me put it this way… Why are you riding? Yeah, you! The person that’s reading this. Sit there and think about that for a moment. You ride because you love it, because of the freedom you get, because it clears your head, because you were raised around it, because it makes you happy… These three-digit guys are no different. I always tell my son, is the juice worth the squeeze? Meaning, is it worth what you’re doing for the possible risk? These privateers are risking their lives every Saturday night for maybe a couple grand, maybe! I can guarantee you that most aren't thinking about the money when they're battling for fourth in the LCQ. They’re thinking about making the main event and the SELF-SATISFACTION that they’ll get from that. There is no greater high. No amount of money can replicate that feeling. The juice is worth the squeeze.

If I was a privateer in this day and age, I would be looking at professional racing as a weekly job interview. Not just for a factory ride, but for an actual job! Not only am I racing on Saturday nights in hopes of getting a good result and some sort of ride, I am also trying to network so I can maybe get a job in the industry when I am done with all of the racing. If I was a 450 privateer I would be training my balls off to be a successful racer, but also making damn sure that I am creating relationships with key people in the industry, so they can put the face with the name when it comes time to fill a spot at their company. Gone are the days of, “If you do well, the phone will ring.” As a privateer not only do you have to kill it on the weekends, you have to network yourself so that other companies/brands see the value in what you’re doing/offering. That also could mean off the bike. Why? Because you never know when injuries can happen and when you might feel like you’re done with racing. Those connections that you had on Saturdays now could be your connection to your new moto industry career. Most professional AMA Supercross riders aren't scholastic wizards (although there are a few) so making a good name for yourself within the paddock is a great way to have a career post racing.

The reason I wrote this is because riding a motorcycle is one of the greatest joys in my life and even though I have lost many races, have been to the hospital more than a time or two, have been in debt because of dirt bikes, the drive to ride as well as race at times still excites me like no other. When I got a job as a test rider, I was in the right place at the right time, but I always wanted to “make it.” Little did I know when I was a privateer that “making it” might have been something other than a factory ride. I hear all the time that riding dirt bikes is like a drug and we are the addicts that it feeds. I don’t know if I am willing to believe all of that, but I do know dirt bikes have provided me with a life that I love and people that I love as well. Yes, not everyone rider is going to be rich in this sport, but it’s what we all have in common that makes this sport so damn cool. Factory rider or not, we all just want to hit the perfect rut, get those butterflies on the gate, jump that double before the other guy, get the holeshot, and get the trophy, but being a professional privateer in this day and age requires you to think outside the box. Every privateer has a journey, the struggles are real, injures happen, but it’s what you learn on that journey that decides on if you “make it” or not. We all have experienced the struggle. We all owe banks money. All of us reading this are “privateers.”