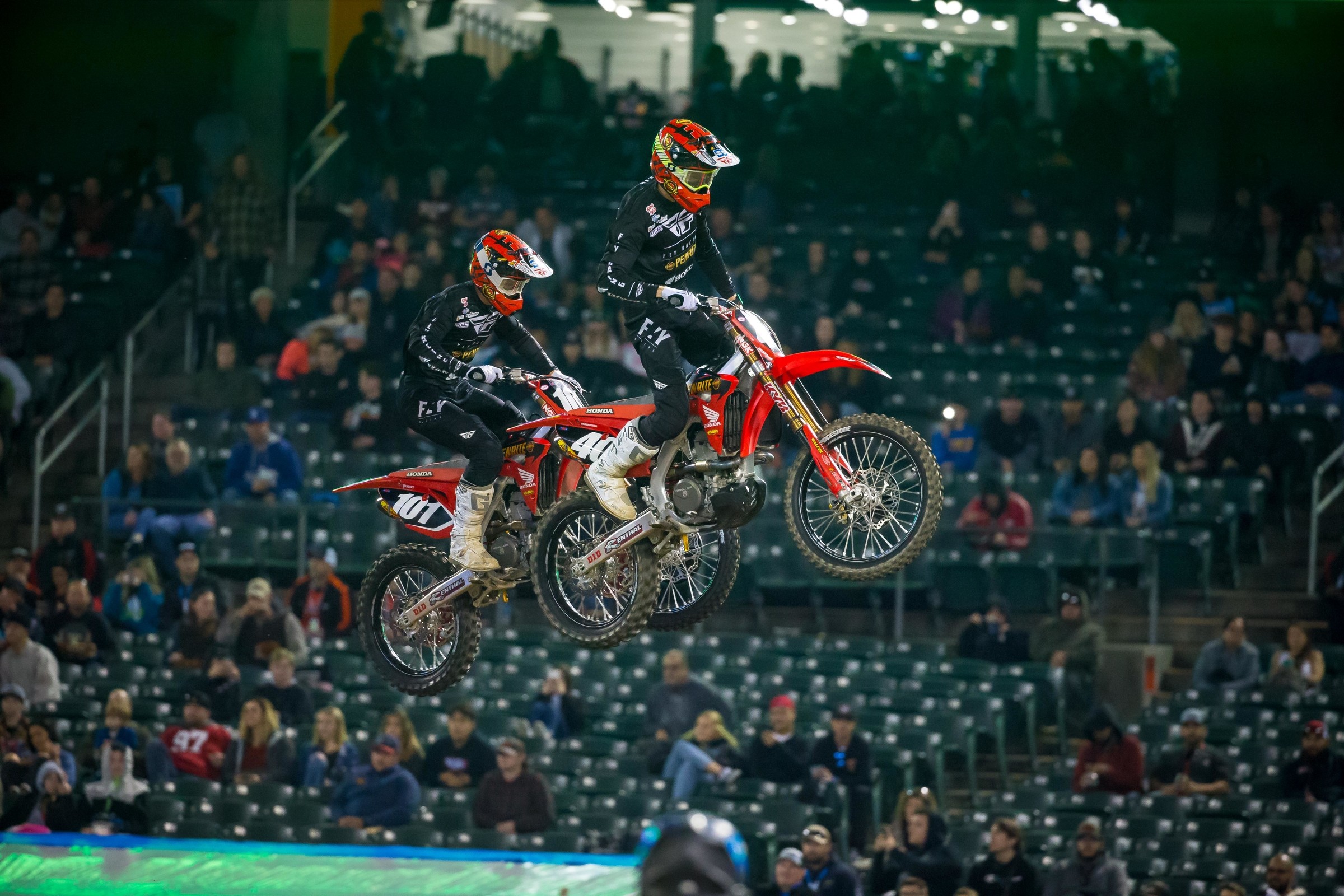 Without GEICO Honda having riders behind the gate (both Christian Craig and Jett Lawrence are out with injuries), Luke Clout and Mitchell Oldenburg got things going quickly at the Oakland Supercross Saturday. The Penrite Honda teammates ran at the front of the second 250SX heat race as Oldenburg led Clout through the first lap, and the two traded spots with one another several times throughout the seven-lap race. Eventually Monster Energy/Pro Circuit Kawasaki’s Cameron McAdoo overtook both riders for the lead before taking the checkered flag. Oldenburg and Clout finished third and fourth, respectively, cementing their way into the main event.

When the gate dropped on the main event, the two had differed results as Clout jumped out with the front pack and Oldenburg was mid-pack. Eventually both riders earned season-best finishes: Clout finished fifth, besting his sixth from last weekend’s Glendale Supercross Triple Crown and Oldenburg tied his season best with a sixth-place finish. The two are hoping to carry their momentum next weekend in San Diego while the GEICO team will miss another weekend.

Our Aaron Hansel caught up to with both riders after the night show.

Luke Clout: It was a pretty good day for me and the team. We ended up finishing fifth and [Oldenburg] sixth overall. I was fifth overall in qualifying and I think that gave me a little bit of confidence, I’ve been searching for some stuff during the week and we made a really good bike change this week. We’re starting to figure things out. We were fifth in qualifying and actually led the heat race there for a little bit, which is really good. I tightened up a little bit because I was leading an AMA race, you know, it’s all new to me, and we ended up fourth and took fifth in the main. A pretty solid night and I’m pretty happy with the outcome.

Racer X: Yeah, good progress tonight, in the heat and the main. Does this boost your overall excitement on the night?
Yeah, it’s really good to know we’re kind of ticking boxes. I’m making goals each week and each round we’re ticking them off. I’m working and there’s still work to do. I need to get a little bit better with the intensity toward the end of the race. It’s really intense throughout the whole race. That’s a new learning curve for me and we’re still learning the bike too. I’ve only been on the team for about six weeks at the moment and am just excited to go to San Diego and keep progressing.

Other than intensity, which you mentioned, what other things, racing-wise, are you running into that are different here [than in Australia]?
Everything is different. The tracks are different, the bikes and setup, everything. The setup is a lot more important over here, the intensity throughout the whole race, and the depth of talent. The whole setup is different. And the crowd obviously. Everything is a ways up. I’m starting to get more comfortable with the bike and the way the tracks are and I’m starting to figure out the process throughout the day and how it works. For me though, literally the one thing is intensity. That’s the one thing I need to work on. We have been working on it and we’re getting closer.

I was just talking about this with your teammate. With GEICO not here, what’s it like to be representing Honda tonight?
It’s awesome. Unfortunately for the GEICO guys, those guys got injured and that sucks. But for us to be the guys representing Honda, it’s cool. We’re trying to fly the flag high, and fifth and sixth on the night is pretty solid. Hopefully we can keep progressing. We’ll be the only Honda guys in San Diego again, too. I’m gonna go home and work hard, and hopefully we can be in the top five again, maybe fight for a podium, and keep flying the flag high for Honda.

Mitchell Oldenburg: I came into the first turn really good and just got tagged from behind and went right when the first turn went left. Frustrating. I felt like my riding was good today, I just didn’t put myself in the best position right off the bat. But there are positives in it. I felt good and my fitness was good, I just have to be better at the beginning of the race and we should be even farther up there.

Racer X: GEICO Honda, unfortunately for that team, isn’t here today. How does it feel to be representing Honda in the 250 Class right now?
It’s cool. We’ve put a lot of work into this team, and it’s kind of unbelievable to think that in reality, our team is only eight weeks old. If you think of it that way, we’re doing pretty dang good. Obviously, we want more, and I think we’re a little frustrated because Luke [Clout] and I both know we’re capable of more and we’ve got a lot more in the tank. We’ll keep plugging away and do the best we can. Whatever happens, happens. We’ll keep working and getting better every weekend.

It seems like you’ve been pretty solid so far in these first five, maybe a little more consistent than you might have been in the past. Is that something you’ve been focusing on, or it’s just the way it’s been going?
I think it’s a little bit of everything. Anaheim 1 wasn’t good, I was on the ground quite a bit, and it hurt. That’s something that kind of clicked. I need to back it down and be smarter about this. It sucks being known for being hurt. That’s not something I want to be known for. I don’t enjoy being hurt, obviously. You can’t get better when you’re hurt. It’s been in the back of my mind and I’ve really kind of put my foot down. Like if I’m not comfortable in the whoops, I’m not comfortable in the whoops and that’s as fast as I’m going to go through them. I’m not going to hang it out and try to manhandle the whoops one lap to try to be fast for one lap. I need to make it through the night. It’s frustrating because I know I’m capable of more, but at the same time I’m healthy so it’s a win at the end of the night. I’m trying to stay within that limit but also get better each week.

In the 450SX class, another Honda support team made another impact. The SmarTop/Bullfrog Spas/MotoConcepts Honda team has been nipping at the heels of the big teams for years, and Justin Hill’s heat race win was another example of what the squad can do. Hill took the second heat win of his career—his first since his magical night at the 2018 Tampa Supercross—before finishing eighth in the main event. While Eli Tomac stole the show with his battle out front with Ken Roczen, Hill quietly put together his best result of the year—his first inside the top-ten.

Racer X: Good night for you man!
Justin Hill: Not bad, not bad, better for sure. The heat win was cool, I got to give a shout out to Mike [Genova] and the crew and it got us some TV time. The main had a pretty good start to it but there were some mistakes that put me two or three behind where I really thought I could be, but either way it’s an upswing from where we were. Top ten is a rough racket right now. It was a rough racket last year too, but it’s even rougher this year. Last year I didn’t feel half as good as I do this year, and if I was riding this well last year, I think my finishes would have been boom, boom, boom, boom, right away. This year it’s even more stacked, which is a double-edged sword. You’ve got the most interesting series in years, but you’ve also got nine of the most frustrated human beings! But tonight was good, a little light at the end of the tunnel. Especially with my starts and setup. It’s proving that not changing the bike and just getting really comfortable can pay off. I felt really comfortable on a destroyed track, so there’s a silver lining there.

I changed my mindset a couple different ways. I changed a couple little things on the bike that weren’t pressing. There wasn’t a problem, everything is really good but if we could change anything and maybe make it better let’s do it and that’s what we did. I tried to just do me and find what I liked about myself on the bike this week and that was everything tonight. I showed up tonight and I like it here. I really enjoy this stadium. I’ve good times and good races here, and the memories build that confidence.

You mentioned being up there in the main, a little farther than you have been. When you’re up there does a sense of urgency set in at all? Like, “Okay, we’re up here, it’s time to go!”
Yes, 100 percent, which was my undoing. If I was a little bit more patient with Zach [Osborne] early on… I was just stabbing at him, stabbing at him, stabbing at him, and not getting it done. If I was a little bit more patient and just followed him, gotten next to him and made the pass, I would have sailed out. My whole race would have changed. But Zach rode very successfully defensively for ten or 11 laps and it just frustrated the living heck out of me and that changed my main event. But yes, that sense of urgency, like, “Okay I’m in six, and there’s three!” That’s a whole different mindset than, “I’m 15, let’s go for 12.” That’s just a dull, sullen thought. It’s a different mindset when you’re there, but a comfortable one for me. I felt very good there. I didn’t feel like I didn’t belong. I felt like I deserved to push forward. There were just a couple of little mistakes that stopped me from really doing that. For it being the first race that I was really there, I found a little more comfort being there and I think my confidence is just going to keep going up and up. In a field this stacked you’ve got to have confidence just oozing out of your pores right now. These dudes are just so good. I don’t like sitting back and trying to put limits on people and saying, “This guy has this issue and this guy has this issue.” You know, Deano [Wilson] hasn’t been doing that great and he passed me tonight. You just never know! There are fifteen dudes out there who are just so good that you just never know when anyone will turn the heat on. That’s why I’m happy with my approach right now, which is just looking and trying to see the best me. I’m not trying to mimic anyone, I’m not trying to watch footage of other people, I’m trying to focus on myself and it gave me a little uptick for sure. The heat win was cool and an eight in the main is a lot better than outside the top ten. It’s not what I dreamed about as a child, no, but it’s a yard in the right direction. I feel good about that, we’re on the upswing.