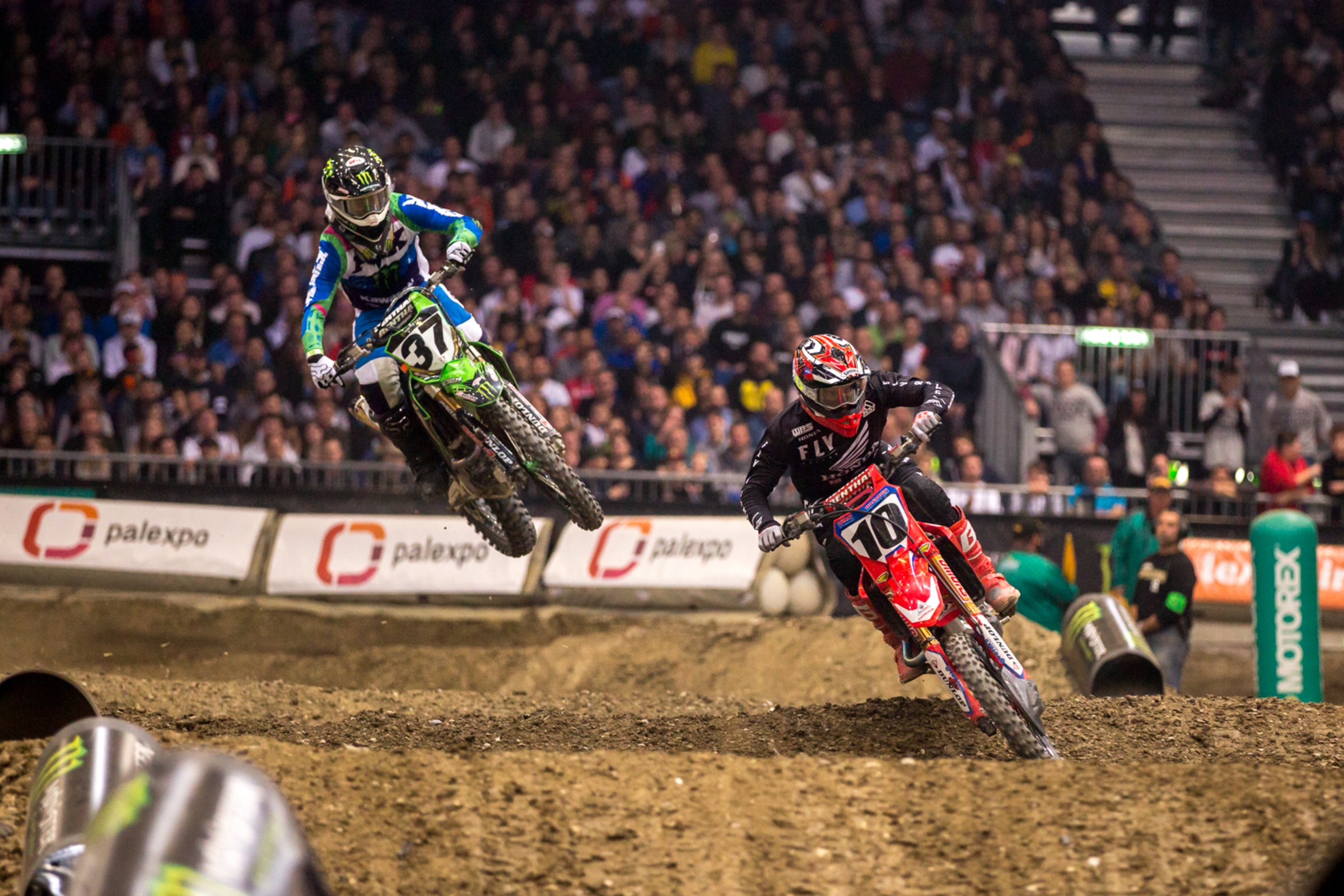 The Geneva Supercross was this past weekend and did you know this race has become the longest running SX that’s been in the same venue in the world? Yes, it has. Thirty four years consecutive or something like that. Even Anaheim skipped one year when the stadium was getting refurbished. Montreal was run for a long time but its streak ended few years back and Paris/Bercy/Lille has switched venues three times now.

Geneva’s a great race, the fans are into it and it’s very convenient for the American riders who show up. The Palexpo is 15 minute walk from the airport, the hotel is a ten-second walk from the arena and life’s pretty good for everyone at this one. The track is usually pretty good but this year was very soft. Like, crazy rutty for Friday program and slightly better for the next night. If you looked closely at the track, it seemed that it resembled Seattle more than Switzerland. The riders were having issues with dragging pegs, keeping the bike straight and all of that fun stuff you don’t want on a SX track.

The track this weekend definitely had some riders grumbling a bit. As mentioned, the first was soft and rutted up bad. The track was very busy with a lot of obstacles and the start was short with a turn that was probably a 60-degree angle right into a rhythm section. So if you got the start, you could double into the section while pretty much everyone else had to single cause it was narrow and sketchy. This allowed the one rider to immediately get out into a decent lead.

Justin Brayton looked to be in tough after Friday nights main event to run his all-time win total at Geneva SX to six. JB10 had gotten a bad start in the short main event and had to work hard to end up third. Out front was Martin Davalos, who was nailing the starts and whoops all weekend long. Brayton was going to be in a tough place with that third to take home the overall, especially with how good Davalos was riding. And when Davalos took the holeshot and got that immediate gap in Saturday’s main event with Brayton trailing, the odds of Brayton becoming a six-time champ looked bleak at that point.

But Brayton hung in there, didn’t lose any time to Davalos (but also never really made up time) and took advantage of Davalos, wait for it, losing the front end going into a split/sand section. Brayton zoomed by which wasn’t ideal for Marty but then when Justin Barcia went by as well, that knocked Davalos back to third place and allowed Brayton to take the win via the better second night performance.

Brayton, coming off his fourth Australian Supercross Championship title a couple of weeks ago, did what he had to do while Davalos made the mistake. These two already had a little bit of beef from the duel races when Brayton felt like Davalos moved over on him in the air. Brayton got him back on Saturday with a semi-aggressive move to match Davalos win the previous night. But there was some mild anger I think on both sides for the moves. Brayton just finished what he felt Davalos started. I myself felt like it was all fine and in the spirit of hard racing.

So Justin Brayton wins the overall to earn the King of Geneva for the sixth time and in another impressive fashion. He did what he had to do (maybe his improved performance Saturday had to do that for 90 percent of the day on Friday he was wearing borrowed stuff because his gear bag didn’t show up) when he had to do it. He joked afterwards with me (who was ON the Marty bandwagon hard) that the #37 Kawasaki buckled under the pressure and you know what? Maybe it was more than just a joke.

I can’t tell you how many riders have told me they would love to be on “the Brayton program” because it involves 17 USA SX rounds, five Australian Supercross Championship rounds, and a couple of European supercross races. Summers off and lots of money to be made. Life’s good for Justin Brayton folks.

Marty, who I’ve known could shine if he were ever to devote all his time to a 450, was the surprise of the weekend. He’s been riding a KTM prepping for his Tedder KTM ride but had committed to this race a while ago on a Kawasaki. So he had to get back on the Kawi (stocker except for muffler) and get ready for this. His starts were on point, his whoop speed looked great and he was really good. Malcolm Stewart, Justin Hill, and Justin Barcia are all great riders but Martin had them covered. Yes, he crashed and threw away the main on Saturday (hey man, washing the front end out is a Davalos tradition!) but he was good. Could he be a 2020 450SX sleeper?

For all of you out there that think I hate Marty, you couldn’t be more wrong. I was there this weekend helping Bryan Johnson, his mechanic, fix a fork, get a higher pressure radiator cap, and offer some tire advice. It felt good to be part of a winning program again! Well, the Honda guys made sure that I knew Davalos’ night went south when I started helping out after the first nights win!

Justin Barcia went 2-2 for third overall but truthfully was a bit behind the top guys in speed. He was consistent but also wasn’t stoked on his bike set-up in the whoops all weekend. The whoops were especially big on Friday night by the way. Barcia was just a tick off those guys and his speed helped give Brayton the win by getting in-between Brayton and Davalos after Marty crashed. His bike was the same one he won the Paris Supercross on and Justin, who’s been very happy with some additions to the Yamaha team in terms of staff members, made a change to it from Paris and I guess it didn’t quite work as well. I spoke about how JB51 is going back to a stock based bike (at least to start with) based on working with the Yamaha R&D guys and I think that’s a good place to be. Geneva didn’t go like he wanted it to but he still rode well, it’s just what can you do against Marty?

Malcolm Stewart wasn’t feeling the track all weekend long. He stopped by our pre and post-race shows all weekend long and just said that he wanted to stay safe and get through the weekend. Yes, the dirt (especially on Friday) was that tough. Mookie never got the starts he needed to challenge the top guys in the mains but he was involved in some good heat races. He was chasing after Brayton in one heat when he dove to the inside of Jordi Tixier before the split sand section (which wasn’t a good idea BTW) and made contact with the world champion. Mookie’s a big dude so he stayed up while Tixier went down but that was it for him, he felt that one and stayed after that one.

Geneva 2019 marked the one-year anniversary of Malcolm asking me if Travis Pastrana was a better rider than his brother. Yes, this happened and I’ll never forget it.

Tough weekend for Justin Hill, who didn’t show the same flash as he did in Paris and also went down hard in the rhythm lane with about four laps to go on Saturday. He cartwheeled pretty good and almost collected his teammate Stewart in the process. He was fine afterwards but it didn’t look good. I’m not sure about this Hill signing by the SmarTop/Bullfrog Spas/MotoConcepts Honda guys, I told Tony Alessi that I would’ve gone with Davalos and although it’s just one weekend in December, there was quite a gap between them in Geneva.

Joey Crown came over from the USA and went 1-1 in the 250SX program over the two nights. He won both his heat races as well so it was a good weekend for Joey. He’s a talented rider who had a poor 2019 season but he showed up at Red Bull Straight Rhythm and won the 125 class. That put him in Eric Peronnard’s eyesight and when he got a note from a KTM team in Switzerland that needed a rider, Eric remembered Crown and got him over there. The last three months have been the best of Joey Crown’s career and just might give him some momentum for 2020. He was very good in Geneva.

Dylan Wright, the Canadian MX2 champion, came over to Geneva as well to see what he can do. Dylan had never been overseas before so this was a big opportunity in front of a lot of people to show what he’s got. Wright’s got serious skills also, he really rode well in Canada to take a dominant title. And get this, he qualified fastest both days! So things were looking very good for Dylan and I because if he could win, I probably wouldn’t stop talking about Canadian riders and Wright in particular.

Well, it didn’t quite work out the way “we” wanted it to. Despite the raw speed, Dylan ended up on the ground quite a bit with the whoops being the primary reason why. I asked Diggs, Wright’s team owner (and mechanic for the weekend) for a list of parts they went through and things they changed in Geneva.

Yikes! Dylan himself was okay other than being massively sore and having a huge hematoma on his back. Whoa Canada indeed!

Thanks for reading! Email matthes@racerxonline.com if you want to chat about this race or anything else.