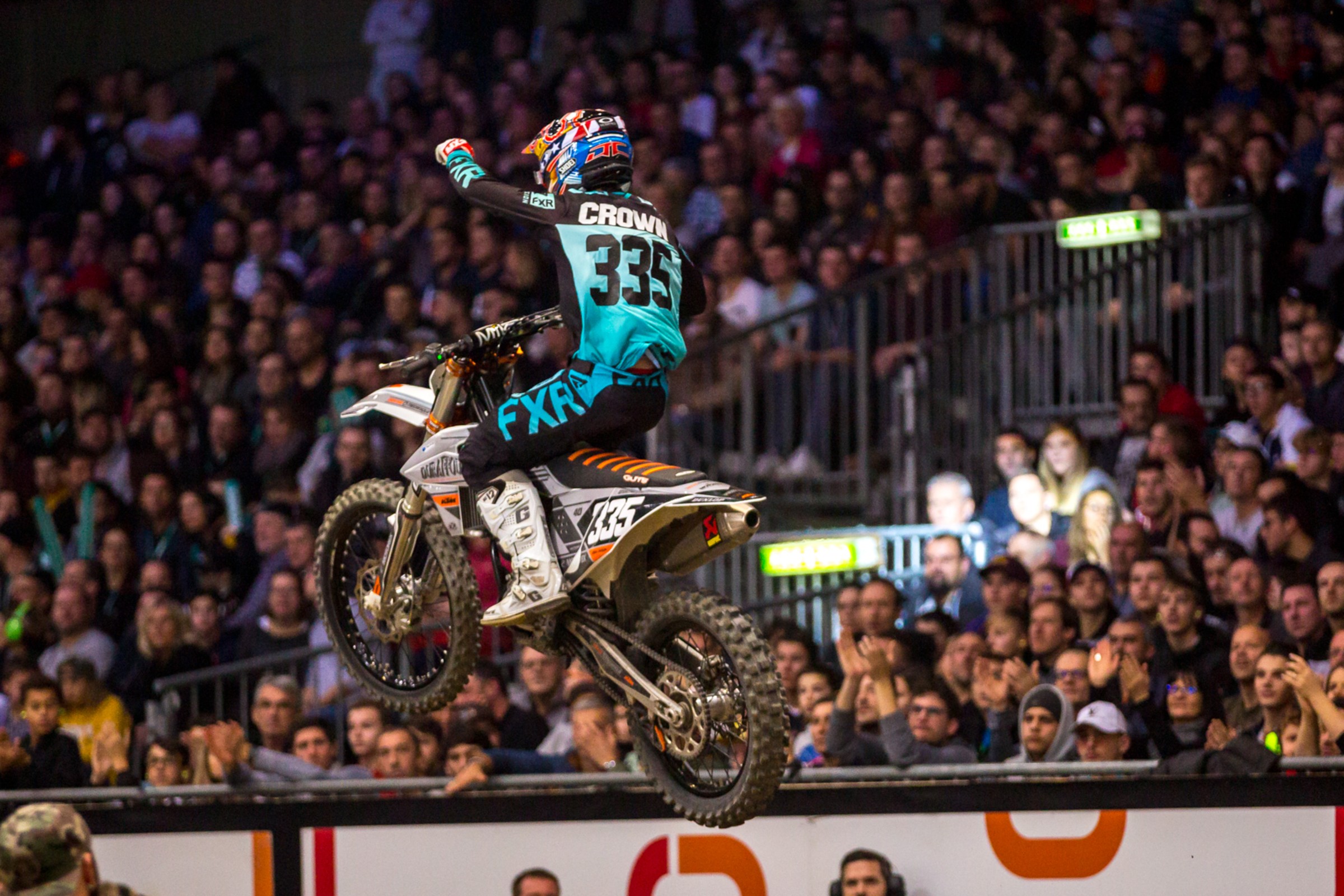 Night two of the Geneva Supercross just wrapped up and for a record sixth time, it was Justin Brayton capturing the King of Geneva title. Brayton, riding his CRF450R, took the lead from Monster Energy/Pro Circuit Kawasaki’s Martin Davalos early in the main when Martin fell and was never challenged from there.

The track, while still softer than usual, did dry out a bit and there wasn’t as much sketchiness as night one. The crowd was great though as it was a 100 percent sell-out of 16,000 fans and they loved every minute of it.

It was a great ride for Brayton who Friday night had to overcome a bad start to get a third but watched as Davalos won the heat, the duel battle and then the main. Tonight, the #10 brought his A game and won the heat (after Davalos made a mistake while leading), beat Davalos in the duel race and then as we said took advantage of the #37 Kawasaki falling. The kind of night that Davalos had Friday night was what Brayton had tonight.

He ended up tying Davalos in points but his 3-1 got the tiebreak over the 1-3 of Davalos. Third overall via his 2-2 scores was Monster Energy Yamaha Factory Racing’s Justin Barcia who told us after the race that he battled with his bike set-up in the whoops and rode two lonely main events to a runner-up spot each night.

The duels between Davalos and Brayton got a little sparks flying with Brayton not stoked on Davalos coming over on him Friday night so yesterday, with Davalos in the lead early, Brayton cut under him, pivoted on a dime and hit Davalos off the track. It was a racing collision and afterwards both riders said that they were square.

SmarTop/Bullfrog Spas/MotoConcepts Honda’s Malcom Stewart showed speed but got a bad start and then fell in the first turn. He worked really hard to come up to fourth but the top three were gone. His teammate Justin Hill was running fourth with Stewart right behind him when he cased a quad and went over the bars hard. He rode off okay but it was an ugly one.

In the SX2 (250SX) class it was American Joey Crown, from Michigan, who took his KTM to another win and the Prince of Geneva crown with 1-1 finishes. Crown’s starts were great all weekend long and although KTM’s Brian Hsu put heat on him early in the main, for the most part Crown didn’t have any heat and put on a great ride.

Although Davalos was probably the best starter of the weekend and showed a lot of speed it was the veteran of these overseas races Brayton that ultimately got it done when he needed to. He added another trophy to his mantle and completed a successful off-season with his fourth Australian Supercross Championship title and now his sixth King of Geneva title. Life’s good for Justin Brayton these days.