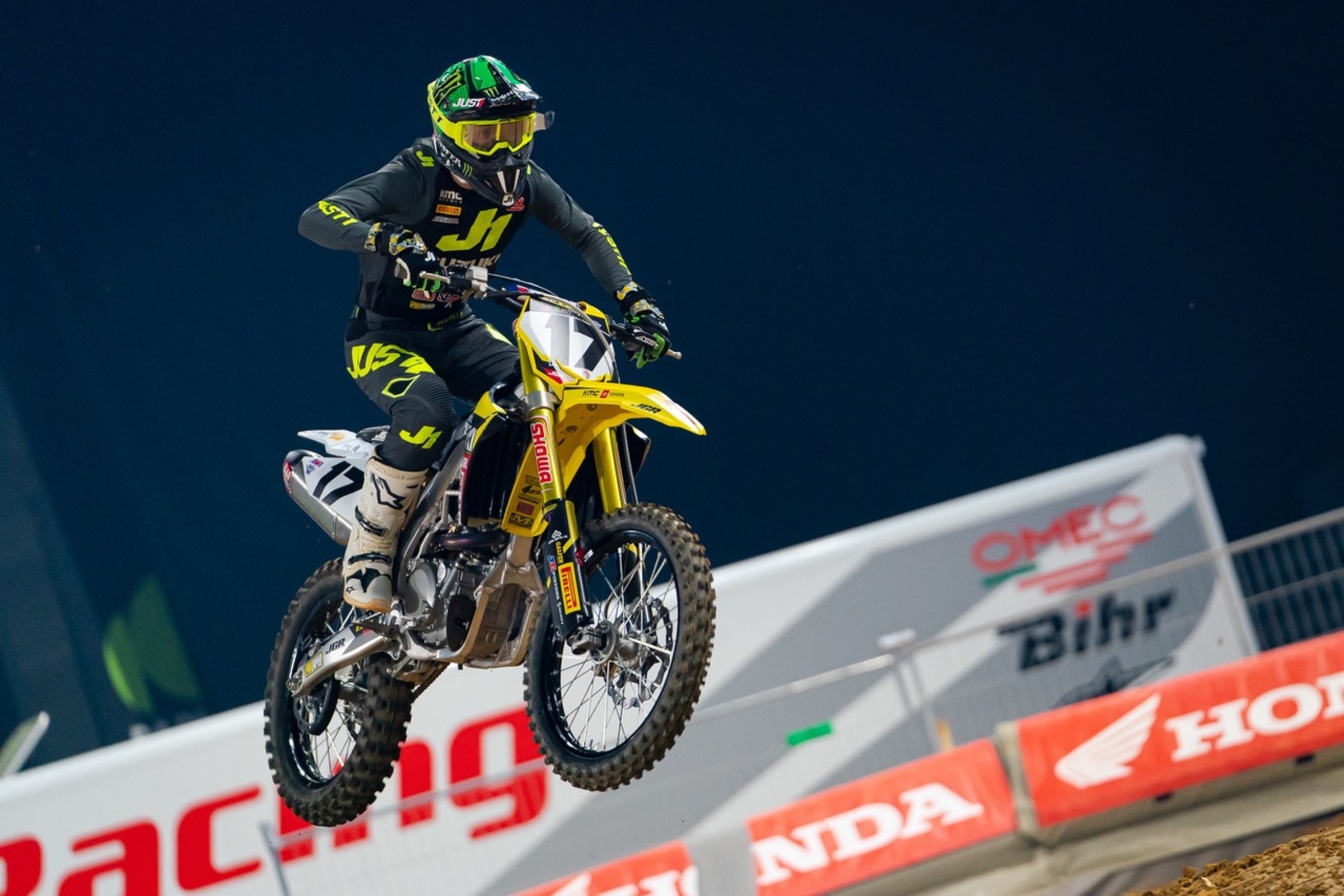 JGRMX/Yoshimura Suzuki Factory Racing announced its 2020 lineup on Friday, consisting of Joey Savatgy in the 450 Class and Alex Martin in the 250 Class. Savatgy debuted with the team last weekend at the Paris Supercross, we he finished seventh overall. Like several other riders and members of the media, Savatgy was quickly on a flight to Auckland, New Zealand, for this weekend’s Australian Supercross Championship S-X Open Auckland.

Our Steve Matthes caught up to Savatgy to talk about his Suzuki debut.

Racer X: Bummer today. Crashed out of the last main event, but still showed some good speed all weekend. The speed was there, but maybe the results weren’t?
Joey Savatgy: Yeah. I think the first night, the 2-10-2 really kind of was out of my hands. I felt like we could have gone maybe 2-1-2 and maybe won the overall the first night, but everything considering that we don’t really have a whole lot of time and it’s a brand new bike, and a stock one at that. We had to work this weekend, but it was a lot of laps. To be honest, I’ve been doing a lot of cardio and stuff, but it’s a little different when you’re racing. We did a lot of laps this weekend. I think I was struggling a little bit the second day. I felt really good. I just couldn’t put it together. Then that last main, just kind of changed up my lines coming into the whoops to try to maybe make a pass on Hill and Friese right in front of me. I got a weird hop as soon as I got in and I tried to ride it all the way out, then right at the end it kind of caught weird and yanked right and I went down. But I’m happy. We’re walking away healthy. We got some more valuable seat time this weekend. Obviously I’ll leave and go to New Zealand from here and we’ll be on a not-stock bike. So have a little bit more power and another week under our belt, so I’m happy.

You haven’t done this race before, right?
Nope, first time.

So you’ve mentioned a few times how much riding it is, and it is. I’ve been to this race a ton. I think it’s my 15th year in a row, and guys who come here are like, shit, man. It’s hard to get going up for every single gate drop.
I think we did 22 laps in the main yesterday, the long one. Then we have the eight-minute and the five-minute and two 15-minute practices. I bet 50 laps at least yesterday. It feels like it. It’s a big workload for me.

Different time zone, you’re trying to sleep, all of that.
Yeah, different time zone, trying to sleep, shorter races. It’s wide open. It’s just full send. I know what I need to work on. I need to be a little bit better early on in the race. But like I said, I don’t really have a whole lot of time and a completely new bike. So I’m trying to learn it on the fly and race with guys who have been on the same brand. So it’s tough, but all in all I felt really good this weekend. I felt like for the first showing, I showed that the speed was there and just struggled with starts the second day. I think that was really the biggest difference.

Early on, what do you like about the Suzuki?
It corners really well. I think the bike doesn’t get the greatest image, but the bike corners really, really well. So far, it’s ironic that I crashed in them, but I feel really good in the whoops on that bike.

I thought yesterday your whoops speed was really good.
Yeah. I feel really good on the bike in the whoops. It’s going to be some fine tuning from here, but that’s why we do these races and that’s why I’m glad I’m able to do them, because now moving forward we’ll go back, we’ll kind of download and figure out what we need to fix.

If Rene was my mechanic I would just ask him Stew stories left and right all day. That’s what I would do.
It’s funny because he knows I’m a big Stew fan. When he was at JGR way back in the day with Malcolm, Malcolm would always go ride with James and the next day I’d always be like, how was James? We still talk about him.

We were talking about it after practice. Him and I were swapping James stories. That’s all I would be doing.
Just got to cover up the one on my bike.

He needs to get you some parts. It was good to see you on the Suzuki. I’m glad the deal is done and now you can just focus and enjoy the air miles you’re going to get these next few weeks.
A lot of flying time, but I’m stoked to be able to do it. Like I said, to get seat time and get my name out there and go have some fun.