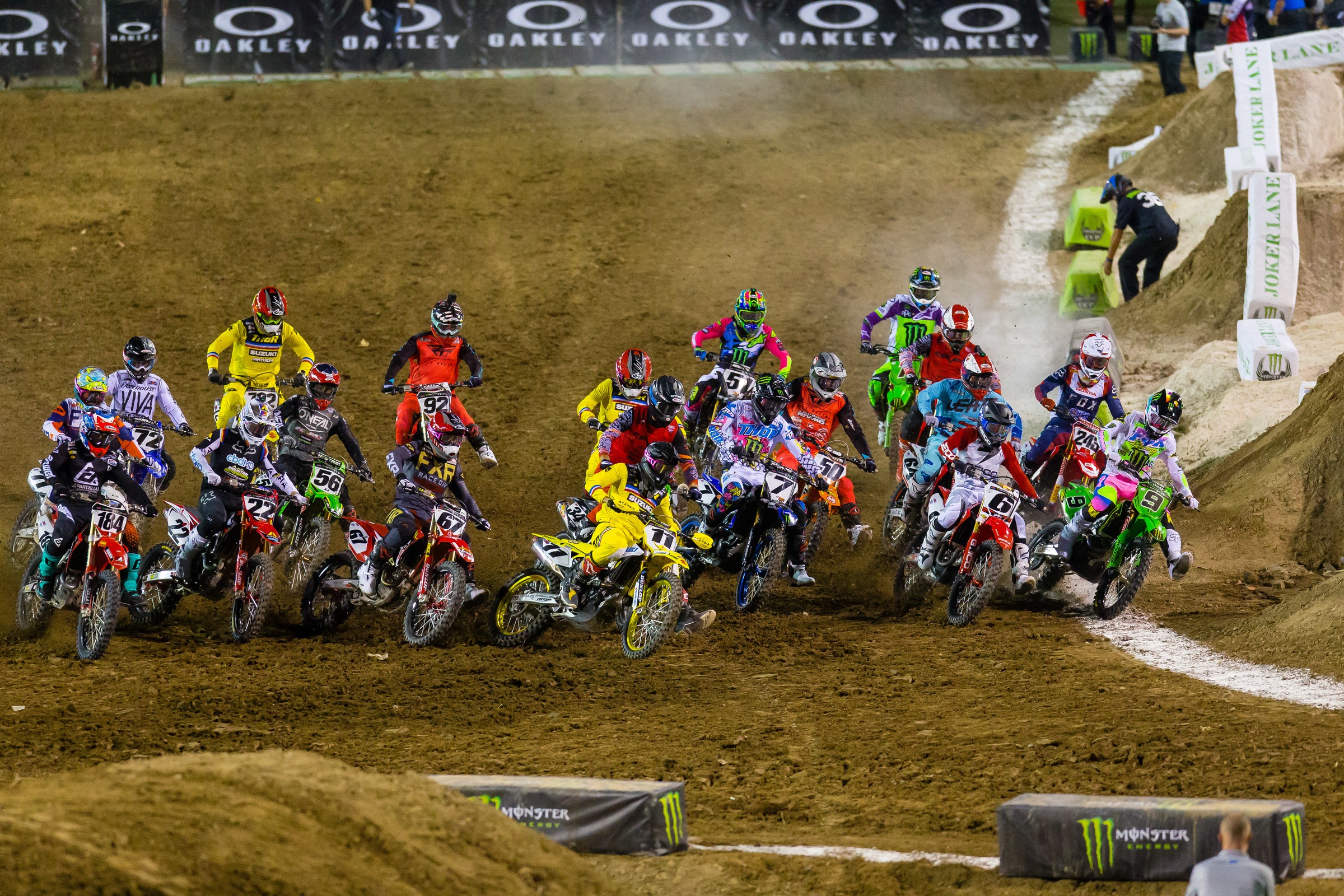 We’re once again firing off questions at long-time pro Jason Thomas for some opinions on the 2019 Monster Energy Cup.

What did you think of the backwards track?

I thought it worked! I don’t think it’s something that should ever make its way into the normal Monster Energy AMA Supercross but for the one-off trial that is the MEC, it was a nice variation. The one snafu was the edge of the tabletop that caught Jordi Tixier and Dean Wilson (and almost Tomac and AC9 in practice), but that could just as easily happen on any track. The level of alertness surely was raised as riders had to really focus on the constant change, i.e. different starts, different jump combinations, awkward angles for the ruts, deteriorating take-offs and landings, etc. This event has always been a place to try new ideas and step out of the box. I do think that the race needs a venue change to infuse a bit of excitement (attendance was down) but I also think that Feld, Ricky Carmichael and Dirt Wurx did a good job of changing up the race configuration.

Do you have Mookie Fever?

I don’t know if I have a full blown case of Mookie Fever but he did ride really well. It was good to see that he looks to be back to the level he was at pre-Glendale. We all know that whoops are Mookie’s true forte, even if they caused a huge injury for him last season. On a track without whoops, for him to grab a win was surely a nice confidence booster. His 2020 results will come down to two factors in my opinion: starts and fitness. If he can find the fitness needed for 21 minutes and consistently start inside the top 5, he will have a great year.

TG243 was solid. He didn’t set the world on fire per se, but he also didn’t cartwheel his works HRC into the night sky, either. A fifth overall is a result he can be satisfied with and most importantly, he left healthy. After Tixier’s huge crash in practice, I was hoping Gajser would just find a way to keep it on two wheels. Every time an MXGP regular comes stateside for a supercross and has a big crash/injury, I think it lessens the chances of anyone else giving it a shot.

Overall, I think Gajser did exactly what should be expected. He rode well, represented his skills in a discipline that he doesn’t ride often, and will now enter the off-season ready for 2020. If anyone expected him to go out and battle Tomac or any supercross regular, that would be misguided in my opinion. American riders ride supercross 8-9 months a year and are true specialists at it. It’s a different skill set.

How much does an off-season result indicate for the next season?

I have made a rule to never draw conclusions from this event. Exactly zero riders are fully prepared. I think we saw Cianciarulo’s preparation pay off as he got to work quickly after the season, putting his new Kawasaki KX450 through its paces. Most of the field has taken September off, riding a week or two before the event to shake off a bit of the rust. They will then take another week off after the event before “boot camp” starts for everyone on November 1. This final week between now and then will be a recharging of the batteries. Once boot camp begins, the unofficial start of the new season has arrived.

What does this do for Adam Cianciarulo's confidence?

I am sure he is enjoying Cabo this week with a smile on his face. I don’t think he was lacking confidence, though, to be honest. He has ridden the past few years with Ken Roczen day in and day out so he already knows the level needed to win. The next two months of riding and preparation will do more to feel “ready” come January 4 than a money grab in October.

Is this Jett Lawrence's world and we're all just living in it?

Jett is funny, right?  I love the back and forth between he and his older brother, Hunter. Jett is still young (16) and has a lot to learn but his future certainly looks bright. If he can continue to improve and becomes a winning level rider at the next level, his personality will earn him a lot of fans and extra money, too. This sport has a way of sucking the personality out of riders as the pressure rises. Hopefully Jett doesn’t fall into that trap but as we have seen, it usually doesn’t happen until the move to the high stakes 450 class, anyway.

So, what’s next for the Monster Energy Cup? This race started in 1998 with the US Open at the MGM Grand, and that morphed into the MEC in 2011. After nine years of MEC in Las Vegas, many are expecting a big shift for 2020 in either venue or city altogether.

I do think it’s time for a change. The new Raiders’ stadium by the strip would be a good step, or even moving location to somewhere unexpected. The race is well funded (purse and bonus opportunities) so I do hope it sticks around. It’s a great opportunity for riders to make some money, fans to get a supercross teaser, and try out new ideas. I enjoy going to this race, so I would like to throw Cabo, Maui, Grand Cayman, and Bora Bora into the mix for possible 2020 sites. Cool?