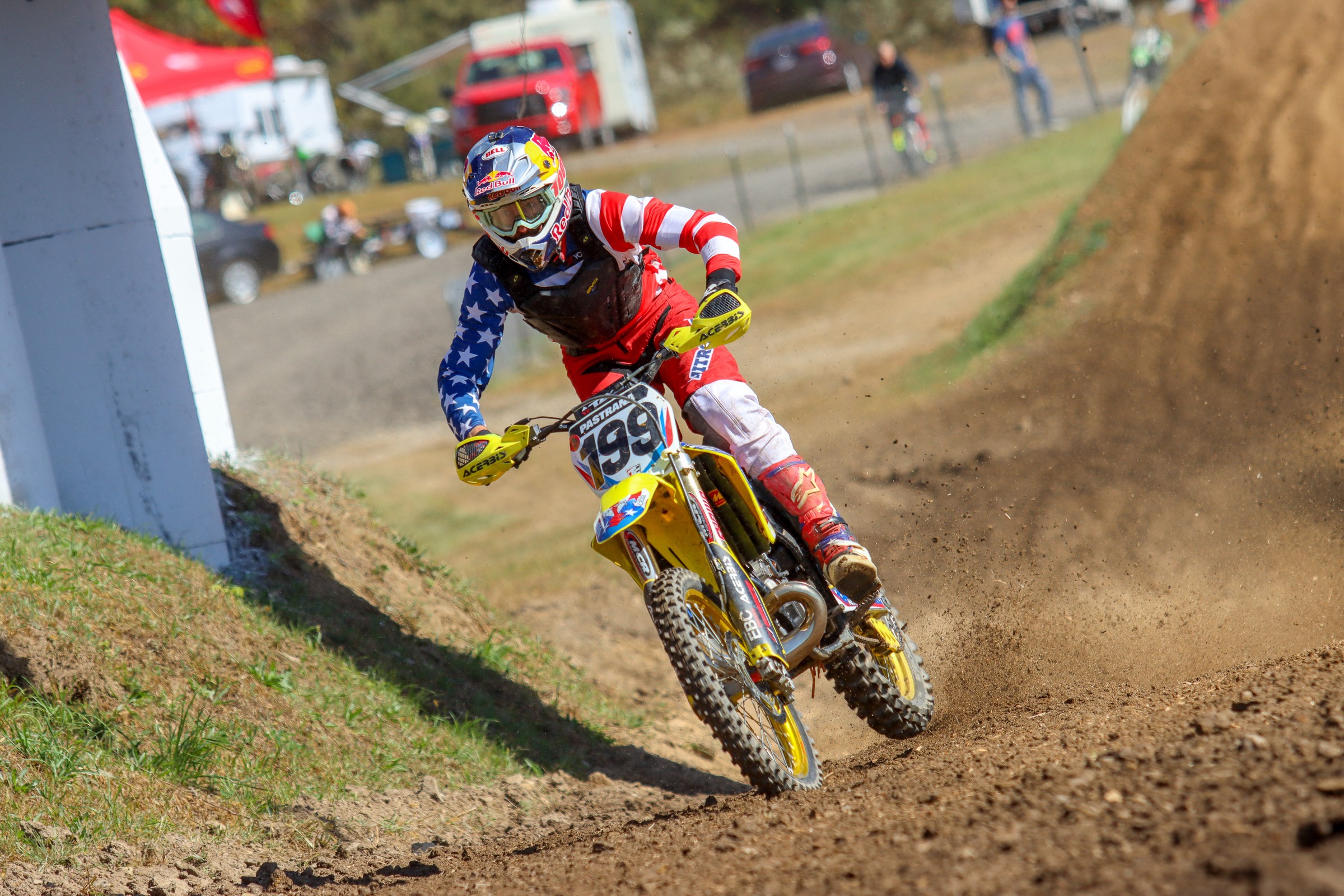 You’d be surprised how many words regularly get cut from interviews. Not necessarily because of unprintable content, but because there’s often simply too much to fit an allotted space of the magazine. Layouts are designed ahead of time, and you simply can’t jam 1000 words into a 500-word sack! Sometimes words get tossed on the cutting room floor and forgotten, but some of what gets cut is simply too good to throw away. The latter is the case in a couple of interviews we did recently with Adam Cianciarulo and Travis Pastrana. Both are great in interviews, and not using everything they give you would be like tossing hundred dollar bills in the shredder because your wallet is full. So instead we’re giving them to you, right here.

Racer X: Early in the season it seemed like things might have been a bit salty between you and Dylan Ferrandis, but that dynamic seemed to go away as the season wore on. Is that an accurate perception?
Adam Cianciarulo: I harbor no ill will toward him, but when you’re on the other side of what happened at Vegas it’s not easy. Anyone who took advantage of that and won the championship, I’m not going to be super stoked. It sucks to be on the other end of that. You don’t fault a guy for doing his best and ultimately winning. It didn’t make me mad at him, just mad in general that I screwed up. We did have a run-in at Pala where I cleaned him out, but it was totally unintentional. It wasn’t malicious, it just so happened that it worked out that way. If I was him I for sure would have thought I was trying to make up for something. But I never had any problems with Dylan. He was never overly aggressive, he didn’t do anything dangerous, and he always does his best when he’s out there.  He rides with a lot of intensity and I can really respect that and relate to it. He’s got a lot of urgency in his riding style. For how close we raced each other all year, I think our relationship is about the best it could possibly be.

Things were a little tense in the press conference after Pala. I think we as media members maybe jump on things when we’re looking for stuff.
I think a lot of the times you guys see something like that and jump on it, and we as racers are quick to downplay it. We’re not trying to deal with any type of excess drama and I think that’s a lot of athletes. If you were a fly on the wall in a private conversation a lot of athletes will have a lot of things to say they wouldn’t say in press conferences. I honestly kind of enjoy when the media tries to dig in situations like that. I’m being truthful with you right now, but every now and again, in a press conference, you may have to downplay things. You may have to be a little politically correct. Not all the time, but sometimes there’s a line with being respectful but also not being super boring. I honestly enjoy the tough questions.

Well a lot of the time when we’re asking questions, we’re not expecting an honest answer.
Totally, right? Unless someone is really trying to make a point, you’re not going to really get a full answer. But it is cool when guys let loose every once in a while.

That’s what was surprising at Pala. Ferrandis actually gave us a real and honest answer and suggested you were angry about supercross. It was like, ‘Woah, he’s answering the question!’
Yeah, exactly. I find the Europeans are a little more honest than some of us Americans. I think it has to do with the culture. Friends that I have from Europe, they don’t beat around the bush much and will tell you straight up what they think. Sometimes that can kind of throw you off a little bit. It’s cool.

On last year’s Motocross of Nations appearance at RedBud…

Travis Pastrana: At the MXoN, I was slow and it was kind of embarrassing just riding around and getting like tenth place or so in the LCQ. But the crowd, they just came alive and cheered us the whole way around the track. It was fun to be part of the sport. The racing wasn’t where I excelled, but I enjoyed every second of it.

Racer X: There are only a few guys out there, you and Kevin Windham being two of them, who no matter what, where, or when, if they come out everyone just goes nuts. You hadn’t raced a motocross race in years before the MXoN and everyone just went nuts. That had to feel good.
Dude, it’s awesome. I’ve been very, very fortunate. I love motorcycles and I think that passion comes through. At least I hope! I’m pretty goofy but at the end of the day it’s about having fun. Anyone who can make a living on a motorcycle and anyone who can continue to make a living from it, like Jeremy McGrath and Ricky Carmichael, these legends who still ride a lot and still give back to the sport, they’re still fast! It’s amazing. Kent Howerton, that guy freakin’ rips still! It’s awesome to see. And Doug Henry too. That’s another guy. The crowd just cheers him around no matter what he’s doing. It was snowing, sleeting, hailing, muddy, everything was totally miserable, at the Pastrana Pro Challenge, the Cernic race, last year and Doug rode every single lap of practice. He’s paralyzed, people were following him around picking him up. He didn’t skip one lap, he just loves to be out there. Damon Bradshaw was laughing saying, ‘Shit, I ain’t gonna ride in that!’ Guys just love to ride. I’m very fortunate this sport has kept me around.

Pastrana and Henry at the 2019 Pastrana Pro Challenge last weekend.

Damon Bradshaw, on the subject of guys who still rip, he’s one of them.
Yeah! Especially since the era of supercross. A lot of the older guys, when the jumps came around and they were getting out of it, they didn’t keep riding. I don’t think they thought it was much fun. But since the early ‘90s, when they figured out the technical aspect of it, they can still get out there and get around. They might be too crippled or too broken, but it’s fun to watch and it’s cool riding with those guys. The new guys coming up, too. I’m so fortunate to have lived the life I lived and to be able to keep riding.

Yeah, it’s fun to see some of the older guys who are still so, so competitive. I was at the Fly gear launch a few months ago and Bradshaw went out and was going hard with Weston Peick. It’s cool to see.
I think that’s what makes the guys who are good in a sport, good. It doesn’t matter if it’s foosball, table tennis, F1, NASACR, or supercross. They’re going to give everything they have. It’s just as much fun racing a five horsepower Briggs & Stratton engine as it is racing a 1000 horsepower car.

What do you miss most about the ‘90s?
Every year when the graphics would come out for the bikes, they were so different. Talking about Bradshaw and that era, when Yamaha took over everything, they had the bright, bright colors. They changed all the plastics. There were so many changes going on with how the bikes looked from year to year. The feel was really loud coming off that early Jet-Ski era. It was just fun. You could kind of show up, go have fun, and maybe qualify for a national. Now if you’re qualifying for a pro national you’ve been riding every day since you were three years old. It’s evolved past the point where you can just get in and do it.

I blame Ricky Carmichael but that’s a different story.
[Laughs] When McGrath was winning, he and Jeff Emig were still going to Havasu during the week. You could still have a good time. You can’t do that anymore, the guys are just too good and they work too hard. And that’s a good thing. It’s the top level. That’s what it takes.

What don’t you miss about that era?
In that era I was so passionate about racing I just thought everything was awesome, like that stupid Lego song from the movie! There’s a lot about the 2000s I didn’t like when I got to see the industry a little closer, but I thought the ‘90s were great!