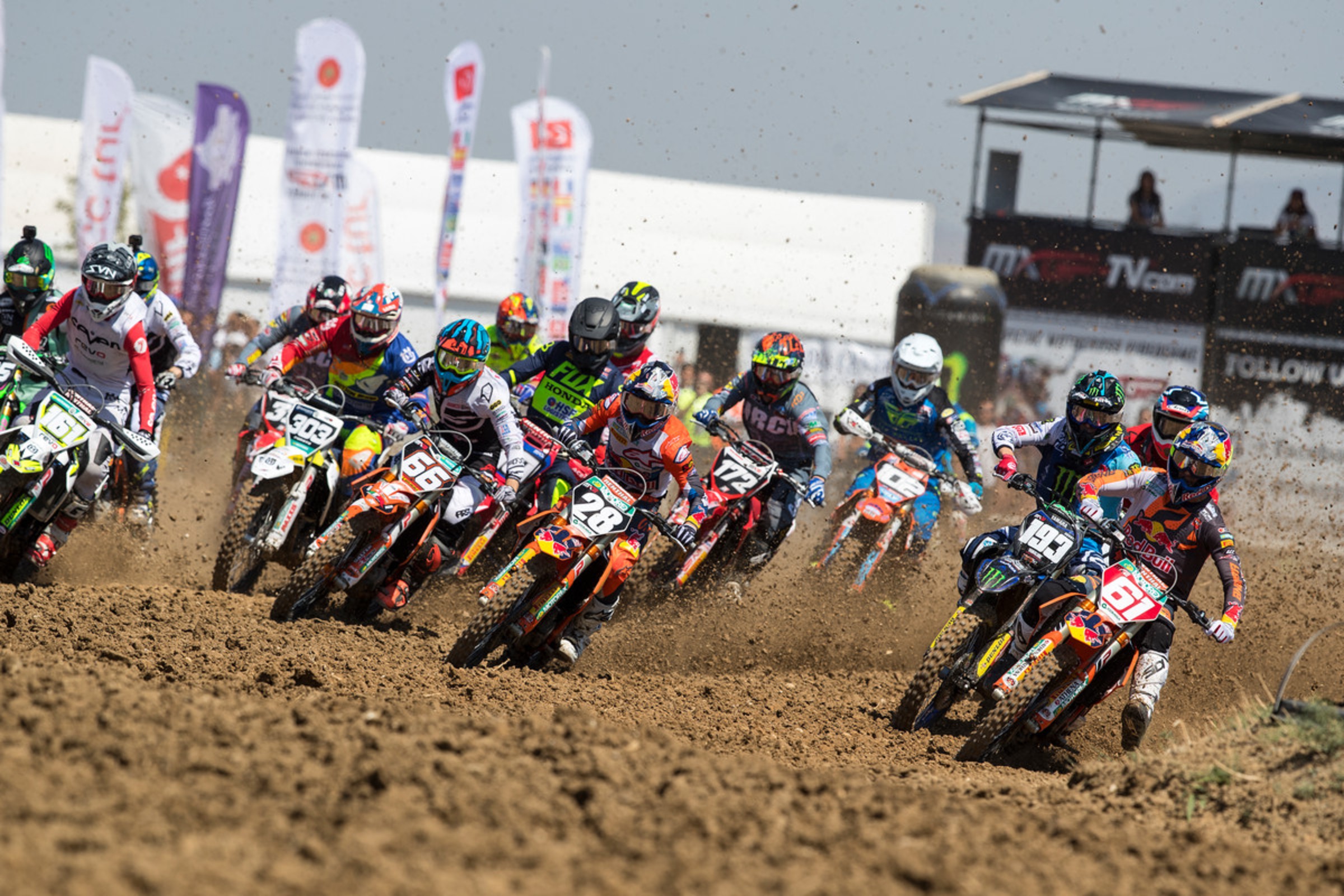 Each week, we throw some questions at former professional racer Jason Thomas to get his take on the races. This week is different, though, because JT spent the weekend in China as part of the TV announcing crew for the first-ever MXGP race in Shanghai.

So we fired off some questions for him to answer during the long, long, long flight home.

How in the hell did you end up commentating an MXGP race in China?

Well, I have been working with the US/Chinese governments on recent trade talks and was able to incorporate the MXGP event into my trip. Just kidding. I was presented with an opportunity to commentate a few MXGP events this year and China just happened to work with my schedule. Originally, this event was scheduled for May 1 and I would have flown directly from the New Jersey round of Monster Energy AMA Supercross, commentated the race on Wednesday (Chinese holiday), and flown directly back for the Vegas finale. With torrential rains flooding the track build area, that race date was then pushed to September 15th. Luckily, I was still able to make the dates work and off to Shanghai I went!

As for why the MXGP folks would put me on the air, I think the upside is adding an American aspect to the event. With the race broadcast on CBS Sports stateside, having a familiar accent brings relatability to a foreign event. On the other side of that coin, the promotion and added visibility for FLY Racing (my regular job) is a great opportunity. It’s been mutually beneficial and a lot of fun for me.

What's the actual air travel plan and the weekend schedule?

The flights are brutal. There’s no other way to put it. Sitting on an airplane for 12+ hours at a time is just not a lot of fun. I left Wednesday afternoon and arrived Thursday night into Shanghai local time. There was a 14 hour time difference and the long haul over the Pacific. My internal body clock was just flashing 12:00 at all times like I lost power for a bit. My body wanted to sleep at strange times and then I was wide awake at 2 a.m. It’s normal jet lag stuff but 14 hours is a pretty extreme adjustment.

As for the schedule, there were a few pre-race festivities organized for the incoming MXGP contingent, but otherwise it was a normal weekend of racing. If anything, it was a bit more mellow than usual as the only race classes were the MX2 and MXGP championship. Many of the other rounds feature some combination of EMX 65, 85, 125, 250, and Women’s classes. It made for a lot of downtime but also kept the track in prime condition.

You've been to a lot of different countries. What sticks out about this?

Most of Europe has a very similar cultural feel. There are subtle differences, sure, but it’s still Europe. China (and Asia et al) is a whole different ball of wax. Shanghai itself is fairly westernized and that helps acclimate but the further we drifted from downtown, the more foreign it felt.

The “great firewall” was interesting to deal with, too. The Chinese government has essentially banned access to websites like Google or Instagram. Social censorship is not that cool in my eyes but hey, it’s not a free country. I will say that the Chinese organizers went out of their way in every scenario to help. Most everyone was lost on how to do, well, just about everything! Even simple things like finding bottles of water created problems for the riders and thankfully, there was help when needed. I think everyone learned a lot in this inaugural event.

What where the fans like? Did they seem to understand what was going on?

It’s hard to tell, honestly. From where I was in the broadcast booth and paddock, it was a long distance to the general public. I think that was probably by design in order to isolate the MXGP riders a bit. There was a makeshift paddock area but it wasn’t setup for any sort of big presentation. With riders and teams missing their race trucks, allowing them the privacy of a closed pit was the right idea.

I would bet the biggest shock was the overall speed of the riders. The Chinese riders were not really on any sort of professional level, so having the best Chinese rider lapped several times surely opened the general fans’ eyes to MXGP speed. Hopefully, seeing what’s possible will inspire Chinese riders and companies to invest their time and money into motocross. The Chinese have money to burn. Let’s burn some on moto!

Yes, there were five or six in each class. The level was probably what you’d expect but it had to be a cool experience for them. I think it also added a local interest, fans seeing a comparison of riders they know against the world championship riders. The hope would be that the Chinese youth would now be inspired to take their motocross scenes to new heights.

You've watched a lot of MXGP this year. What have you seen from Jorge Prado?

Jorge Prado is mature beyond his years. He is fast, that’s pretty obvious, but I am more impressed with the way he goes about winning. He rarely puts himself in a bad situation. He always starts well. If it’s possible to win by a big margin, he will make the most of it. The other races are more interesting for me, though. In many of his wins, he looks to do just enough to accomplish his goal. He doesn’t take unnecessary chances or let his ego interfere. He is an outstanding race manager, assessing the situation as it unfolds. If he needs to pick up the pace to win, he can and does. The big question is how will he handle the MXGP field. He won’t be able to simply manage the race anymore. He will have to be flat out for 35 minutes to deal with Jeffrey Herlings and Tony Cairoli (his teammates), Tim Gajser, Glenn Coldenhoff, Romain Febvre, etc. I think he has the talent to figure it out but it’s going to be a different dynamic than he has faced before.

What's gotten in to Glenn Coldenhoff?

I think he has finally regained the form he showed last October. He had a big injury in the off-season and has been slowly recovering ever since. He is going about things the same way as he did at RedBud, getting good starts and putting in flawless laps. He is rarely on the edge and if there are mistakes, they are subtle. Jeffrey Herlings’ comments in China were telling. He surmised that Glenn is on his best form ever. To reach your best level takes time and consistency to reach. I think the entire season was a rebuilding process and he is finally back to form.

How was the track and facility?

Well, those are two different questions. The track was great. Sure, it was man-made in a flat field. The track builders did a great job of adding some elevation and making it feel much more of a natural flow than the surroundings. The dirt was extremely good, also. The mix of sand and clay made for great traction and it held moisture surprisingly well. There were soft spots that made things interesting but overall, I thought the dirt was one of the highlights.

As for the facilities, most of it was temporarily built for the event. Existing facilities were virtually nil and those that were left something to be desired. The race was held in a tourist area not designed for a motocross race, naturally, so it took some planning to make it work right. The organizers did well to provide for the riders and teams, though. It’s always a guess as to how an inaugural event will come off but for a completely new event in a country with zero motocross experience, I thought it went very well. If there was a hope for this race being the most picturesque venue on the calendar, that would be misguided, but I do believe the event was a success.

After watching the Dutch squad go 1-2 in MXGP and take a podium in MX2, what's the level of concern for Team USA?

Team USA just needs to worry about Team USA. If you are a betting man and have big money on Team USA for the win, you should be CODE RED level of concern with the Dutch team. They are firing on all cylinders, racing on home soil, and have arguably the two best sand riders in the world. That’s a big problem for everyone else when hoping for a win.

Team USA can’t worry about the Dutch and what they are doing, though. That won’t do any good. They will need to just find their own best form and let the cards fall where they may. This race is the most unpredictable of the year and rarely goes smoothly even for the winning team. Last year, the Dutch would have also won easily but Calvin Vlaanderen was unable to ride after sustaining an eye injury. Just that quickly, their hopes were dashed. Strange things happen at this race, always have. Will Team USA be the favorites? Definitely not. Can they still win? Yes. That’s how this race goes. Motorcycles are not infallible. Riders are not robots. There are way too many elements to contend with to think it’s a foregone conclusion even as dominant as the Dutch team looks on paper. Earlier this year, Jeffrey Herlings broke his foot on a sighting lap, for example. Strange things happen and Team USA just has to be ready to capitalize.