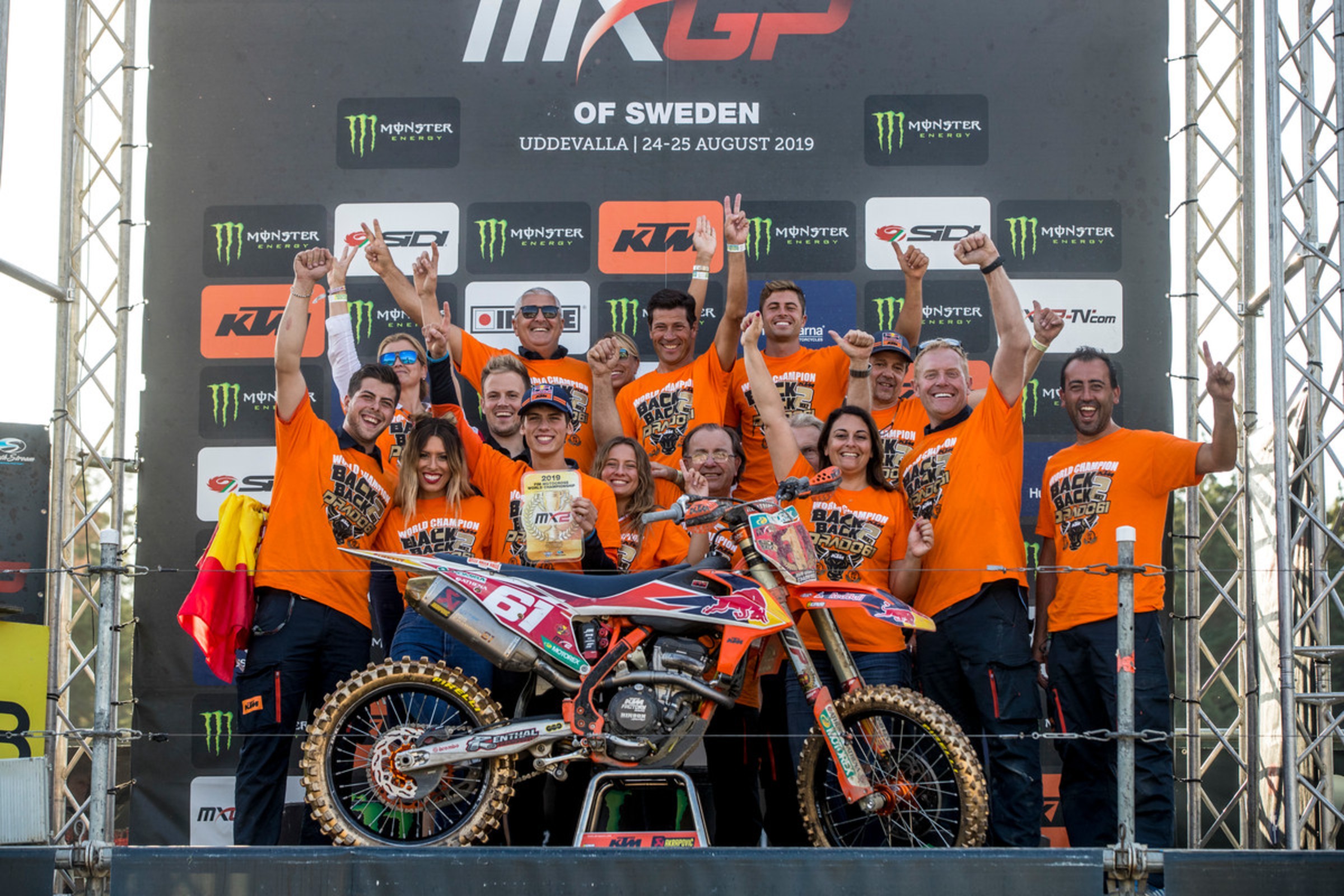 GP Report 3 Talking Points From the MXGP of Sweden

Round 16 (of 18) of the FIM Motocross World Championship served up entertainment and the milestones at Uddevalla.

1. The pleasure and pain of Uddevalla

Uddevalla has fluctuated in popularity over the years. The Grand Prix was traditionally slotted on the first weekend in July to coincide with the large festival in the nearby town and took profit of the party vibe and public interest to swell the crowd.

The lack of leading native motocross talent and a degree of apathy towards an old-school hard-pack layout that lacked effective preparation diminished the appeal. In 2018, Uddevalla vanished from the calendar and the hiatus seemed to have increased the thirst for MXGP. The rocky hillside was packed with (brave and vertigo-free) fans and last weekend seemed like one of the busier Swedish GPs in recent memory.

Timing is everything and the 2019 Swedish GP benefitted in abundance from good fortune. The relentless rain during the week stopped on Friday afternoon and the rest of the weekend was sunny. The effect on the track was prime: softer, rougher, more challenging, really testing the throttle skill and courage of the riders. The ‘old-school’ feeling was still apparent through the one-liney, narrow nature of the layout, and starts were nigh-on essential for thoughts of the podium.

Those who nailed their getaways and looked for variation at Uddevalla were able to profit. Standing Construct KTM’s Glenn Coldenhoff took his second victory and third podium in a row with a deliciously executed last lap move on Rockstar Energy Husqvarna’s Pauls Jonass in the second moto (the Latvian riding well to make the top three for the second time).

“It was aggressive but, hey, when a win is on the line then anything goes,” Jonass sportingly smiled.

Tim Gajser learned from his brief crash in the first moto to win the second and maintained his rostrum streak. Red Bull KTM’s Jeffrey Herlings (more on him later) found himself in the awkward position of leading against the odds. His MX2 teammate Tom Vialle took two excellent starts to win in MX2 for the first time.

Uddevalla also bit. The first race was processional until the riders began to risk a bit more in the final stages and fans were treated to grandstand finales in both outings. Monster Energy Yamaha’s Romain Febvre rallied close to Coldenhoff in the first sprint and lost arguably a good chance at the ‘overall’ through a heavy fall while duelling with Gajser for first place in the second. The utterly luckless Frenchman is allegedly coping with a broken left femur as a consequence—read more on Febvre here.

Renewed MX2 World Champion Jorge Prado said: “I liked the track a lot and it was prepped very well this weekend.” This hasn’t always been the case at Uddevalla, and stock in this distinctive and time-honoured Grand Prix fixture has risen again thanks to a generous helping of close and intense action. And some generous Swedish rain.

So, Jorge Prado can make mistakes. His second moto prang while in third place dropped him outside the top ten and robbed him of the clutch lever. The Spaniard had already wrapped the championship in the first moto with his 27th victory from 29 but there was still winning to be done. His flight back to fourth place and to within three tenths of a second of third behind the resilient F&H Kawasaki’s Adam Sterry almost gave him the overall ahead of teammate Vialle (on a 2-2). Vialle classified 32nd in Imola a week ago and improved that rank by 31 places: 2019 really is a vintage term in the MX2 category for Red Bull KTM.

Those three tenths separated Prado from a 14th victory on the bounce which would have eclipsed Herlings’ streak from 2013 and Stefan Everts’ achievement from his final MXGP season in 2006.

Prado now has two final grands prix on the KTM 250 SX-F, with which he has been the scourge of the class with holeshots and race-controlling intensity, to hike the number again. He cannot defend the championship twice (the so-called ‘Herlings rule’) so while Sweden was another milestone for the Italy-based Galician it was also confirmation of his departure to MXGP for 2020.

He leaves with an impeccable record: two world championships in three seasons and 27 victories, and arguably signs were prominent from that first feisty full debut as a wildcard at Assen in 2016 where he finished on the podium and proved to be a nuisance to Herlings’ goal of home GP glory. Is Prado one of the finest MX2 riders of the modern era? The evidence is supportive. Only two others have gone back-to-back since the creation of the class in 2004 (Herlings, and Marvin Musquin) while Tony Cairoili grasped two gongs in 2005 and 2007.

How about validation from an athlete that can rightfully hold forth the claim as the best ever on a quarter-litre bike?

“He’s been great this year: the best by far,” offered future MXGP teammate Herlings. “He’ll go to the ‘big boys’ next and I respect that a lot at his age. I know he doesn't have another option because of the rules but doing it at 19 deserves respect. It will definitely be tough for him I think. He’ll fight for wins, don't get me wrong, but it is different compared to the MX2 boys. He’s had a great MX2 career and almost as successful as mine. I won three [titles] and 63 GP races but I was there way-longer and if he stayed the same he’d probably do better. I’m happy I’ve still got some records!”

Team HRC’s Tim Gajser claimed that 2019 was his best season and with a 15th trophy in Sweden, the Slovenian and new world champion was not exaggerating. His duels and defeat of Tony Cairoli in the first five rounds of the series also gave credence that Tim was prepared and capable to go toe-to-toe with one of the two main protagonists from 2018. He led MXGP from round eight and posted eight wins in nine rounds during the middle of the calendar to firmly lay the foundations for his second MXGP crown. He was the strongest and the fastest.

Still, the spectre of Jeffrey Herlings hung over the campaign.

Like a Shakespearian ghost, the Dutchman fleetingly appeared twice to remind everybody of his presence and the Swedish round was another dramatic intervention, which invited harder questions of ‘what if?’ (Gasjer mentioned that has faced the enquiry as to whether he could defeat a 2018 Herlings more than any other this year). Herlings surprised everyone, but most of all himself, with a comfortable win in the qualification heat on Saturday. There is little meaning to the sprint once the initial race order is established but #84’s pace was impressive considering he had been riding less than two weeks after returning to the 450 SX-F and recovering from a fractured ankle. Herlings’ first 2019 MXGP soiree had come in Latvia in June where he aced the first moto at Kegums. In Sweden said he was at “60 percent” and without much hint of gamesmanship. When he holeshot the opening race on Sunday and proceeded to lead for the better part of 20 minutes, there was an ominous feeling that the rest of the MXGP felt was being unintentionally mocked.

A combination of arm-pump and (understandably) withering conditioning saw Herlings ebb back to fifth, drop the KTM and then have the bike wrecked by the pursuing Monster Energy Wilvo Yamaha’s Arnaud Tonus. He didn’t finish the moto and there was a palpable sense that reality had prevailed. However, Herlings’ effective second moto fourth-place finish showed that the sight of the all-conquering KTM is a lot closer than people might think.

“The problem was that I took the holeshot!” he explained of his surprisingly and alarming time back at the front of MXGP. “On Saturday it was fine for twenty minutes but in the first moto I was really struggling with arm-pump. We made some changes to the bike to have the suspension a bit softer because I was not at my normal pace. I led for the first 20 and then couldn't hold on so well and had a small tip-over. Another rider hit my bike and damaged it pretty bad so I couldn't finish, which was a shame because I think I could have been fifth-sixth. In the second moto I didn't get a holeshot: which was pretty good because I don't feel comfortable leading yet. I was around eighth and worked my way up to fourth. Together with first yesterday it hasn’t been bad practice for less than two weeks on the bike. We can still work for a few more races until the ultimate goal in Assen.”

“I came away healthy and didn't crash on a sighting lap!” he joked, in reference to his crash in Latvia that led to a second surgical procedure in 2019. “Not too bad.”

In terms of the looming 73rd Motocross of Nations at Assen, the hosts could not be in better shape. Herlings is making gains and Coldenhoff is mixing starts, confidence and total comfort with the 450 SX-F to potent effect.

“I think he’s had three RedBuds now!” joked Herlings. “I hope he can keep this pace until Assen. I’m still ‘cold’ right now but by that time I’ll be warmed-up and I think we have a really strong team that is hard to beat.”

The Dutch had been unveiled as a four-man squad earlier in the week and with F&H’s Roan Van de Moosdijk clinching the EMX250 European Championship (he’s easily the best 250 rider outside of MX2 on the continent) in Uddevalla and Honda HRC’s Calvin Vlaanderen capitalising in the mistakes by both Red Bull KTM riders to win the second moto it hard to remember a more potent line-up for the event. The Dutch will ultimately have to decide between Van de Moosdijk and Vlaanderen later. The folly of forward-planning in motocross was highlighted last week in Imola when Team GBR—also a handy sand-riding trio—were two-thirds decimated due to injuries to riders named to the team (and Shaun Simpson continues to struggle with the set-up of his RFX KTM). In Sweden it was the defending MXoN champions from France who were forced to reorganise.

Febvre’s ugly impact led to his second broken leg of the year and will give the Yamaha man a pair of operated limbs barely six months apart. The French were buoyed by the resurgence of Vialle but will now have to consider their options for the other 450 slot. Febvre’s ‘Nations replacement, Jordi Tixier, will have the penultimate round of MXGP in the far-flung Turkish circuit of Afyon in two weeks time to show his mettle.