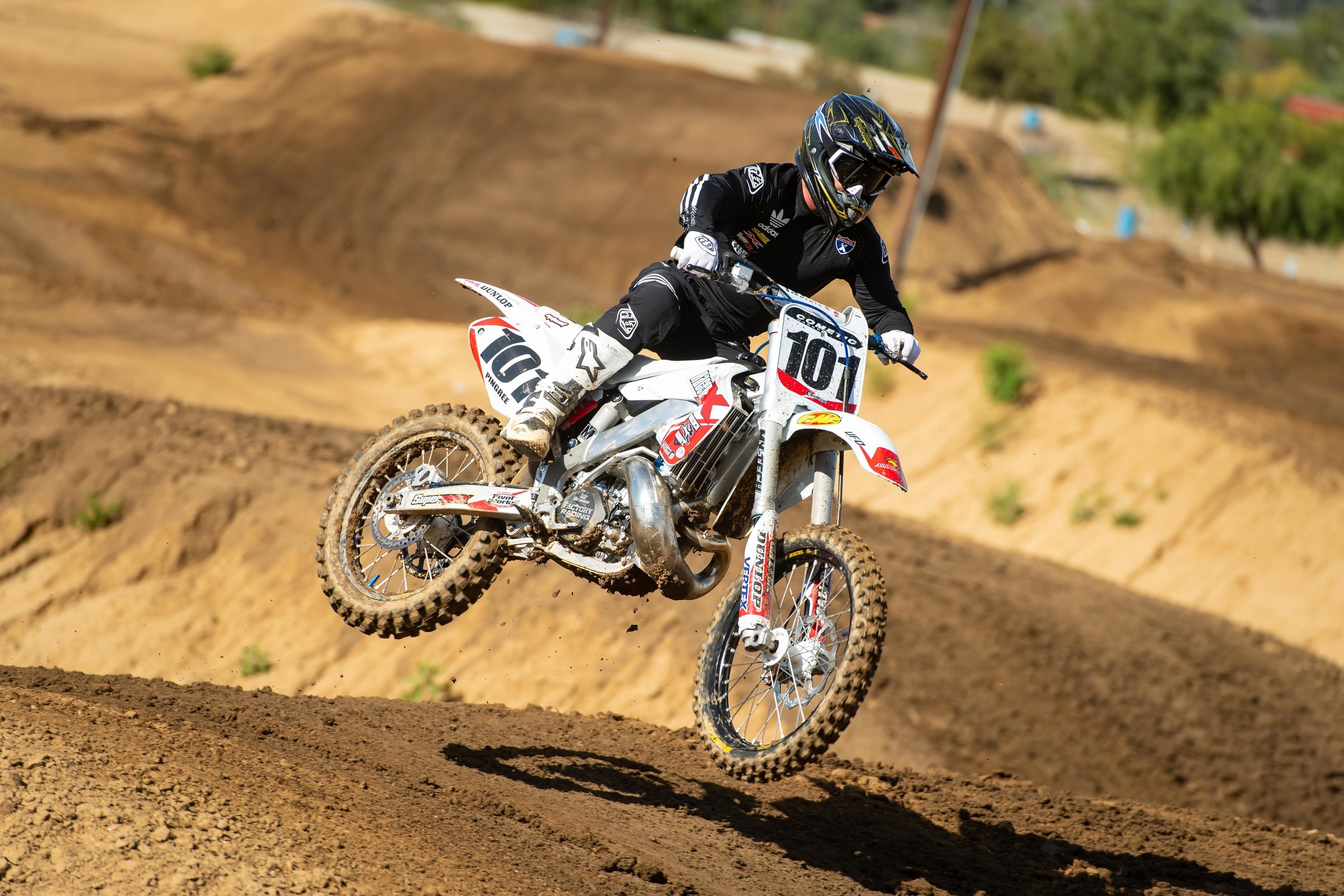 Good work on the 125's, must be great racing them again. Of all the tracks you've had the pleasure of riding, which one kicks your adrenal glands into full epinephrine production? Which one obstacle/feature plays twisted hesitant havoc with your mind and has the potential for a nervous brown crayon to draw a masterpiece in your undercrackers?

I had a few, but they were due to my inability to ride not seeing eye to eye with my more dominant ambition. Having used up more than my share of luck I've since redressed the balance and now have zero ambition to match my zero talent.

That’s a great question and there are some obvious answers. You’d probably get plenty of people to say LaRocco’s Leap brings on the brown crayon underpants artwork, but it wasn’t doable from the track on a 125. Glen Helen has had some ridiculous jumps built into the national track over the years that were way too much. Unadilla used to have an uphill sweeper after the new “skyshot” jump that was fifth gear pinned down the straight and up around the hill past the old mechanics area. It got rough, it had rocks, and a swap out at that speed would put you in the hospital. Those were the kind of sections that made you pucker up.

Binghampton used to have a step down just a few turns after the start that would get rutted and be super sketchy. The landing was blind so you’d just line it up in a rut from the top and send it. Left a couple Dale Earnhardt Jr burnouts in my knickers off that jump. Honorable mention to big whoop sections in Las Vegas, rutted triples, and rhythm sections where you have to seat bounce from a small jump over another big and small jump. Any of these could easily ruin a pair of underwear.

Some of the best sections, the adrenaline pumpers, are drops that send you into a valley filled with fans. I had forgotten how amazing that feels until I raced a couple of these 125 All Star events. Dropping down into the switchbacks at Washougal, fans lining the fences and covering the hillsides, is such a cool feeling. Budds Creek had several of those as well, including Henry Hill. Also, the jump now known as the Chadapult in Millville has to be one of the coolest jumps in the series. The distance is just far enough that you have to hit it with some speed, and it floats you up in the air enough that the hangtime feels like an eternity.

I could go on and on, but I’ll end with one recommendation: Get a 125 together and go race an All Star event at your favorite track. I realize there are some rules and not everybody can make that happen, but if can, you should. Glad to hear you’ve matched your talent and ambition…. it’s cheaper and less painful that way.

I was not surprised to learn that MotoGP now has mandatory airbag rules for racing. The benefit of an instant mattress to aid the tumbles with little downside makes for a compelling piece of tech.  I understand that dropping out of the sky on a supercross bike is a bit different from road racing and I know that every racer on the track is trying to ride au natural to impress Forker's girlfriend, but is anyone looking into this tech for our heroes of dirt? Seems like a tether system would help out in some of the major get-offs and Reed wouldn't have to wave down help as he breaks his 56th rib.

Because the bulk of the vest would be deflated 95 percent of the time it seems like the added protection would balance any rise in weight. You might lose some mobility in the arms but how much mobility do you need when you’re panic revving everything anyway?

Anywho.Thanks, as always, for the hard work. I look forward to your articles every Friday.

Seems like a no-brainer, right? One reason these are slow to get into moto, I believe, is that these units are expensive. I’ve heard that from several of the road race guys and that could be slowing down the introduction to our sport. Motocross guys crash way more often than road racers, and many of them are low-speed. This is great tech for big crashes, in theory, but what about tip-overs in turns or small low/high sides in corners? With a tether you’d find yourself puffed up like a fat guy on a Chinese food diet every time you tipped over. Repacking and re-charging is likely expensive and time-consuming (consider the liability of it being done wrong) and that is also a problem. Riders would have to keep multiple units on hand at all times.

I’m not saying these aren’t a good solution, but we need to get them on some riders and work through the details to make it suitable for our sport. In the meantime, bros are going to keep flexing to impress Rylee Jean. Trust no one, Austin.

This is a question regarding the inconsistent moto finishes of Eli. I’m not going to ask why do you think he is so up and down. My question is more towards what a team manager is saying to him in between motos. I know you were a team manager and I’m going to tell you what I would say to him and you can tell us if I’m on point or being a complete asshole.

Being a manager, I am going to take into account that he is a professional athlete and every resource that is at Kawi’s disposal is being utilized. There is literally no expense spared on him and this team to help win championships. I know that some of the greatest champions in the history of our sport have taken Kawasaki to the top step-many times. Knowing this I am convinced we have provided the best motorcycle money can buy. Also, for last week’s first moto I will probably hold back a few comments because it was the first hot race of the year and conditions were tough-so I will go a little easy on him. But the other times this has happened I would M-F him up one side and down the other. Those finishes are not acceptable. And don’t start pouting and have your mommy yell at me because you are a man and you are paid to win, not finish behind Freddy Noren. I will not pamper any of these guys. If you cannot take a verbal beat down you can’t ride for me. Is this what Mike Williams was saying to him and that’s why they parted ways? Look, I would reinforce to him that ours is a professional relationship. We are not going out to dinner every night. So do not take this personal. But I will do whatever you want to help you win; if you cannot handle a little bi***ing out, go ride for Honda again.

Complete asshole. But, that would be your right as a team manager. Each person has to find their own way and run their ship as they see fit. As a former rider, I know Eli is harder on himself than any team member would be. Because of that, I’d focus on finding solutions and helping him sort it out rather than beating him over the head with insults and making threats about what will happen if he doesn’t pull it together. When I hired Ben Townley at TLD, I knew he was very particular about setup. We were working on a sub-million-dollar budget, the definition of shoestring in this sport, especially when you’re running two 250 riders and an elite-level 450 guy. I bent over backwards to make Ben happy and did everything I could to get him comfortable, even if it seemed whimsical or unnecessary. I did that because our shared goal was to get results on the weekends and my job was to facilitate that for my riders. If we could afford it and it was logistically possible, we did it. The result was a very successful summer for BT. He had several podiums, he won a GP moto at Glen Helen, and he came half a lap from winning the overall at RedBud. All of that from a startup team competing with the factories.

Now, the one caveat here would be if Eli wasn’t putting in the work during the week. That would be a different story and we’d be having a come-to-Jesus meeting about his employment with the team. But that wasn’t the case with Ben and it certainly isn’t the case with Tomac. Trust me when I tell you that Eli is trying his best to eliminate his little mistakes, and since he is a few races away from locking up his third national motocross title in a row, I’d say he’s doing just fine.