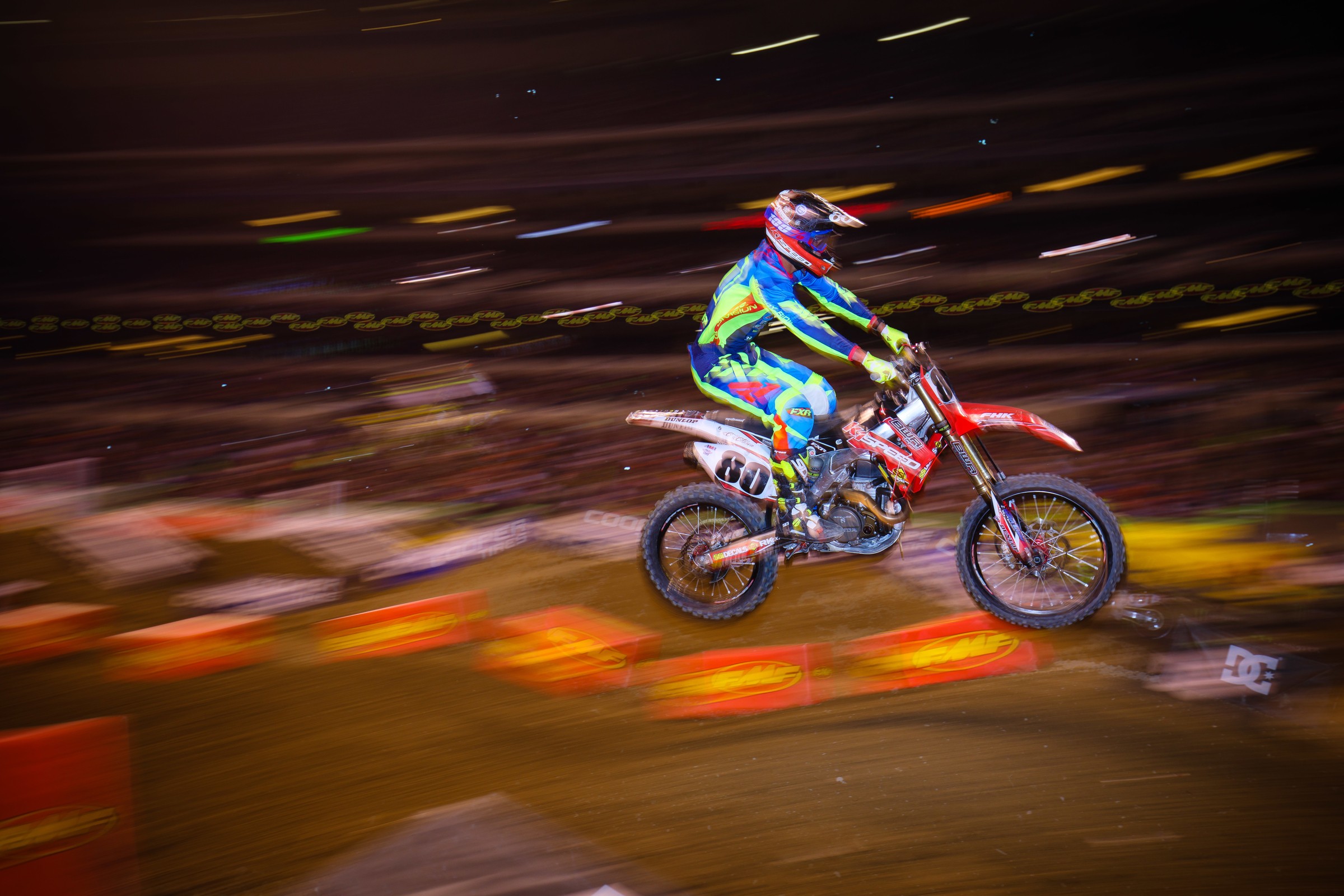 The entire WADA/FIM drug testing program in the Monster Energy AMA Supercross Championship has been confounding, frustrating, confusing, and exasperating. And that’s just for the fans, never mind the riders!

Cade Clason was one such rider that has been caught by the system and not been able to get a real resolution to his case. A privateer rider that isn’t as high profile as some of the other guys, Clason was busted for Adderall a couple of years ago. He had a TUE for it (Therapeutic Use Exemption), so Clason assumed he was good to go.

Only he wasn’t. His second application of the TUE was rejected, but he never heard back for his second application, so he figured that meant he was clear, so Cade went racing. Then he got busted. He’s been stuck in racing limbo ever since waiting to see when he can race an FIM sanctioned event.

“It’s been two years. A long time coming. I’m happy I get to go racing again” Clason told me on the Privateer Island podcast the other day—which you can listen to below.

Unlike James Stewart and Broc Tickle, Clason never got an actual penalty for his positive test outside of a Skype call early on that said it will be at most four years. It took a while, but with Stewart and Tickle (and waiting to see for Christian Craig), actual penalties were eventually handed out. With Cade, it was more like “Oh hey, oops you’re good now” or something like that. He’s good to return to racing now, never having actually known what his penalty was supposed to be. Or was this actually the penalty?

Frustration with the system doesn’t even begin to describe the feelings many people have with this. However, there are some changes behind the scenes and it appears to have helped Cade.

In this case, the appointment of AMA’s Rob Dingman to the vice president of the FIM started speeding things up for Clason.

“The last eight months has actually been really productive and the people I’ve worked with are really cool,” he said. “Without (Rob) Dingman none of this would have happened. He basically put his foot down and stood up for Broc (Tickle) and I. If it wasn’t for him, nothing would have gotten done. That guy calls my dad multiple times a week just trying to help. He’s been a huge help. They just have a bunch of new people involved, which is awesome. They’ve been super productive and trying to do stuff. It just takes a while.

“No matter what we did, even if the FIM approved it, they’d have to send it to WADA, and then they’d [WADA] have to approve or deny it. A few times FIM would approve stuff that we were doing or that we needed, and then WADA wouldn’t. So that’s like a one-month swing right there of just waiting for them. So it was just a really long waiting game, which is annoying but there was nothing else we could really do. It was a struggle, but we finally got to somewhere where we could agree on everything that was happening and we just made it work.”

“Now I have an approved TUE,” he says. “It’s called a retroactive TUE. Basically I now have a regular TUE. It kind of came after the fact, so they wanted to do a time served kind of thing, but I had to do at least half of what the original punishment was, so that’s why it was set to two years.”

Clason’s test was taken at the New Jersey Supercross in April of 2017.

There were some silver linings for Cade once he got notified he was suspended. He immediately got his shoulder fixed up since he knew he’d have some time off of racing. His gear company, FXR, stepped up to give him a job as a rider rep at the supercrosses, and the last couple of summers he’s raced in Canada because the series up there has no FIM affiliation. Therein lies another issue, though. Someone else close to this situation told me that if he raced anywhere for money, his suspension would carry on forever. Tickle also told me the same thing, he was told he cannot race anything, anywhere for money.

So why did Clason get to do it and have his suspension overturned anyway while Tickle was forced to sit out of everything? Yeah, you see where I’m going with this.

“I don’t know if I got really lucky or what,” says Clason. “I kind of just risked it. So I’m not faulting Broc by any means. That guy did what he thought was best for him. Broc’s in a little bit different situation, too. He has to make way more money. I’m not in the same position he is. He’s probably made way more money in his career and he can afford to take time off and weigh it out and see what happens, whereas I wasn’t in that position.”

Throughout the whole process, Clason doesn’t deny that this suspension is on him for not following through on his TUE paperwork. “Basically what we came to is the fact that whether it got lost or whatever, they never got the second form that I sent in,” he says. “Me assuming that it was approved was my fault, obviously. I should have probably put more effort into it, obviously. That’s why I’m at fault, and that’s kind of why I’ve just accepted the fact. Like hey, I got suspended. I just need to make it right now. Some people want to blame them. I’ve kind of came to terms with I messed up. I should have done better with my paperwork, and that’s why I’m suspended.

“It’s weird to me because I see all these comments on social media and it’s like, ‘screw these guys, screw these guys.’ It’s like, man, in reality I’ve just kind of came to terms. I f****d up the paperwork. Now I just have to work on what I need to do to be better. It was hard to deal with at first. I just didn’t really know how to accept it at first and now I’ve just came to terms with it. I just try to stay positive and not blame anyone for anything and just try to fix it.”

So Clason is back and ready to go. He’s still racing in Canada, but with a weekend off for that schedule, he tried to race this weekend in RedBud. Entries were already full. Still, Cade Clason is attempting a re-start on his career in the U.S., and starting with the 2020 Monster Energy AMA Supercross Championship, it’s not going to be easy.

“I don’t think I’m going to show up at A1 next year and light the world on fire, as much as I would love to come out top ten and be like, ‘Two years, this is what it takes!’” Clason told me. “No. That’s not what’s going to happen. I would love to come out and just take it easy and get through. Basically pre-season supercross is scarier than actually racing supercross because you’re so rusty and just riding the practice track is sketchy. It just takes time. I kind of want to ease back into the supercross thing and just figure it out one step at a time. We’ll see how it goes from there.”

Finally, Cade Clason is free. While the two-year sentence itself might be par for the course for an infraction—or even positive, considering he was originally told his ban could last up to four years—the problem was that he never knew how long his suspension was going to last in the first place. For the first time in two years, Cade finally knows what’s next. It’s about time.