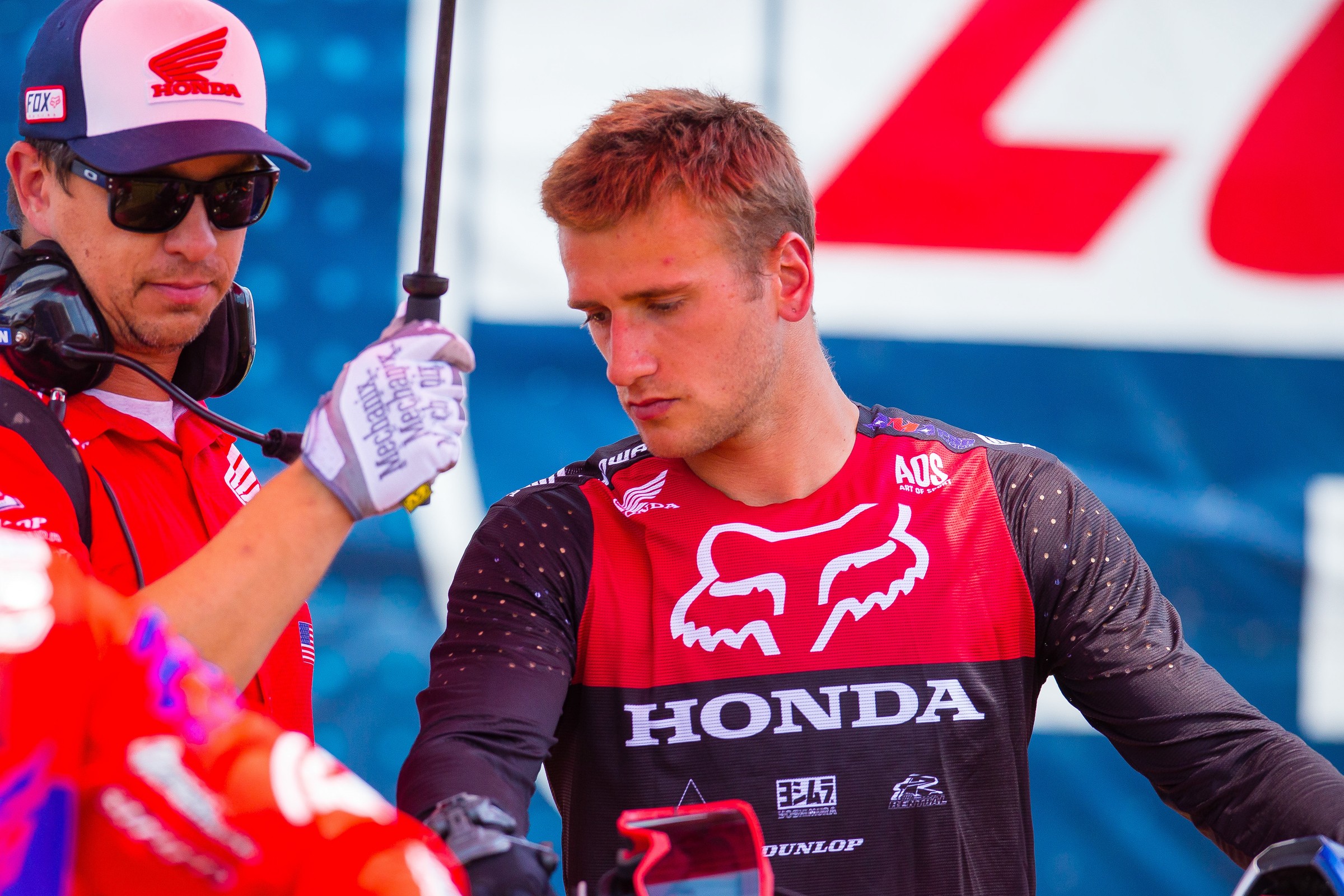 This turned quickly. After the first moto of last weekend’s Florida National at WW Ranch, Honda HRC's Ken Roczen held sole possession of the 450 Class points lead in the Lucas Oil AMA Pro Motocross Championship. He finished second in the first moto with his title rival Eli Tomac finishing seventh, a strong follow to his superb second moto ride at the previous round at High Point. Things were certainly looking up for the Honda HRC man.

Until they weren’t. Roczen struggled in moto two, fading, then crashing and finishing a lowly tenth. By the end of that day, he’d lost the points lead back to Tomac.

“Jacksonville was a tough one,” Roczen said in a team statement. “The brutal conditions made for some crazy racing. I finished the first moto in second, which I was okay with. Unfortunately, I had a hard time cooling down for the second moto. I was okay until the halfway point, when I made some mistakes and went down. After that point it was just about survival and making it through.”

Kenny was back to his usual speed this weekend at Southwick, as things looked good in qualifying and early in the motos. Then the fade came again, and it was even worse this time. He went 12-10 for ninth overall.

Mid way through the Monster Energy AMA Supercross campaign, Roczen admitted he was struggling with some sort of illness, which led to fatigue. He’s gone through a battery of tests from a lot of sources, but hasn’t revealed (or doesn’t know) what the actual issue is. No doubt, the Florida National’s brutal temps combined with Southwick’s rough race track pushed him to the brink.

“I was coming into Southwick fairly excited, though struggling a little bit recovering from last weekend’s race,” said Roczen. “Still, I came in with full motivation and a new fork setting that unfortunately didn’t work out very well for me in the first moto. On top of that, I could’ve recovered a little better from the weekend before, but I knew that I went out there and gave my best. For sure it wasn’t what we were looking for, but we’re going to continue working hard on the bike and I’m going to continue working on myself to get back in top shape and get back to winning races. For now I have to take it as it is, but I’m going to keep my head up and hope for a much, much better result from RedBud. I’m going to do everything I can throughout the week to prepare myself and get back to the very top. Other than that, there’s not much to say about my result besides we’re not very happy with it and are looking to turn it around next weekend.”

Roczen actually clocked the fastest lap time of the second moto before fatigue set in.

“It was a tough day, even if Kenny showed speed early on in both motos and his arms didn’t get tight in the second moto,” said team manager Erik Kehoe. “Still, he was frustrated to not have the stamina to keep that pace up. For us, we've got to learn something from this weekend so that we’re prepared for next week; he looks to be having similar problems to what he struggled with in supercross, so we'll get with his training team and figure out the next steps. The good thing is that the bike felt good to him this weekend, so Oscar and the guys did a good job with that.”

“The day started off good with Ken qualifying third-fastest,” said Roczen’s mechanic Oscar Weirdeman. “Unfortunately, I think he's still feeling the effects of last week's hot race in Jacksonville. He took it very easy this whole week, but coming here he was still tired. In the first moto he was up there going fast. Then, 10-15 minutes in he ran out of steam and basically just made sure he didn't throw himself on the ground. He ran great in the beginning of the second moto because even though he got a mediocre start, he was closing in on the leaders. After that, it was the same as in the first race. Physically, he's been struggling this whole year. The heat last weekend made it flare up again, so we'll just try to get him some good rest and come back better for the next one.”

From holding sole possession of the points lead just three motos ago, Roczen now finds himself at a 28-point deficit in the standings. RedBud will prove a critical juncture for him. There’s an off-weekend looming after this next race, so if he can stave off any further damage in the standings he might be able to mount a championship comeback starting at Millville. If he takes another big hit in the points this weekend, the entire season will have a different look. For Roczen, it’s clear some of the physical issues he was worried about have come into play this summer. Will they persist, or can he get back in the fight?