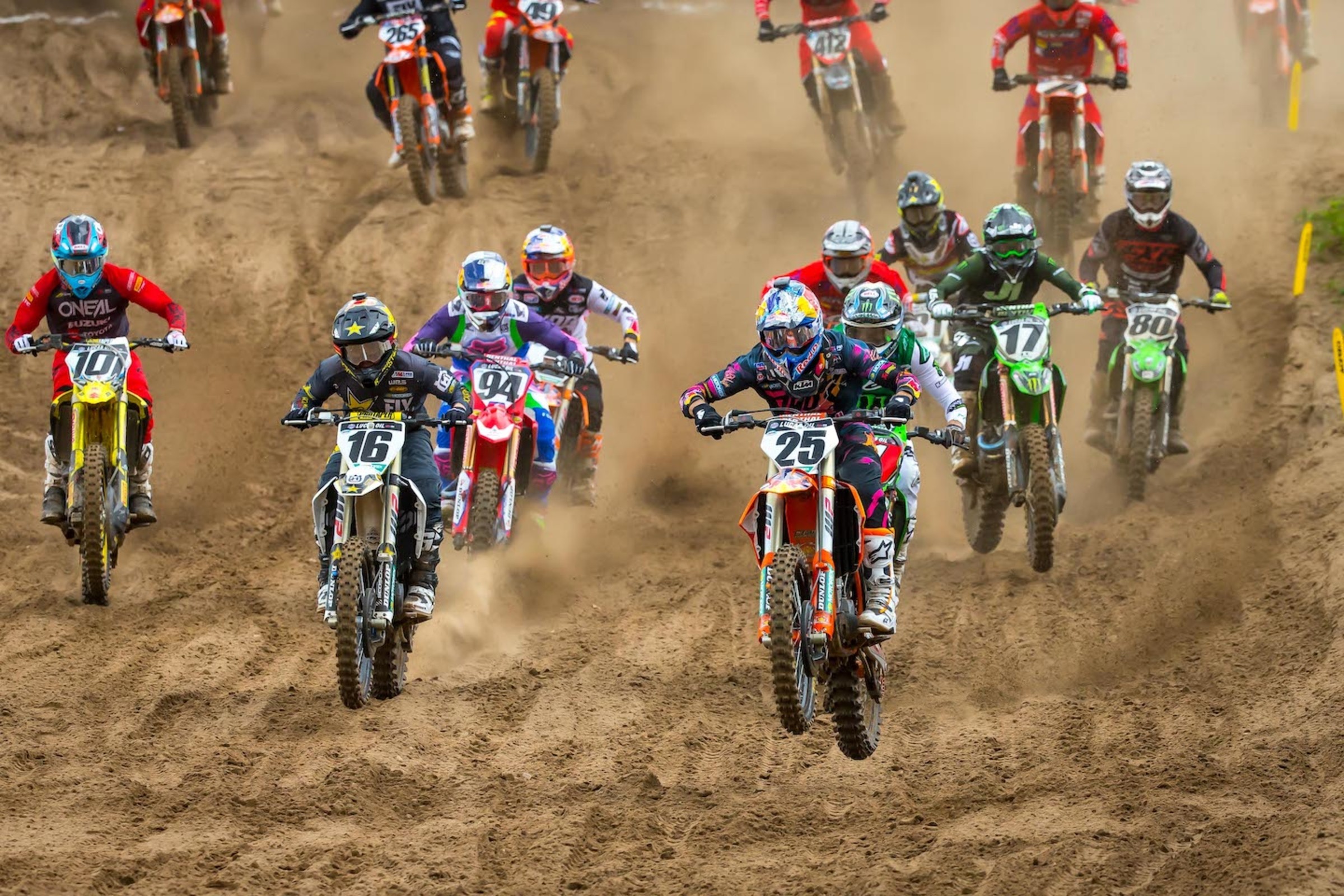 These are exceptionally tight title chases in Lucas Oil Pro Motocross for 2019, so each moto—heck, each lap—holds considerable weight when it comes to momentum, confidence and points. That makes the toughest races even more critical, as the title might just come down to who dug deep at the right time. After a tough physical test last weekend in Florida, the stars of the sport had another brute in the form of the MB Tractor and Equipment Southwick National at The Wick 338, and those who dug deepest survived best in the race and the championship.

Case in point, Marvin Musquin, who dug out his second-straight overall win in the 450 class, but it was not easy. Marvin absolutely ruled the first moto, leaving all of his key rivals behind immediately and checking out. The second moto was tougher, though, as Zach Osborne got the better of him early and took off with the lead. In the second half of the race, Eli Tomac caught Musquin, and had Tomac passed Musquin for second, the overall would have swung Osborne’s way. A Tomac pass on Musquin seemed inevitable since he caught him, but Marvin hung tough, dug deep, and pulled back away to preserve second and the overall with 1-2 scores. That’s huge for Marvin’s championship momentum and also in the standings, where he closed up __ points on Tomac for the day.

“Overall it was a good day, first practice I never really put a good lap together, I knew I could do better. It’s maybe the first time, I think, that I got faster here in the second practice, but it shows that we built berms and the track came along, it was actually better for racing,” said Musquin, of Red Bull KTM. “First moto I put myself in a great position, leading, but it was a long moto, when you lead the first lap to the end it feels like forever. The second moto the goal was to do the same. I was in the hunt for the top spot, in a decent position, but Zach had a little gap, but even with that Zach had good speed the whole moto and there was nothing I could do with that. There was nothing I could do to really catch him. Physically it was very demanding, Southwick always is, so that’s why I’m very proud to win here. It means a lot.”

On the other end, Tomac and Ken Roczen, the series’ leaders early this year, again had their struggles. Tomac’s early laps in both motos weren’t at his usual pace—especially for Southwick, normally one of his best tracks—but he did gather it together late both times to snag 2-3 scores for third overall. Roczen has bigger problems, fading badly in both races just like he did in last week’s second moto. Roczen still has incredible speed early in the race, but clearly, the Honda man and former series’ leader has struggled physically on these two brutal weekends, and has gone from leading the points to third in the standings. Roczen went 12-10 in the motos.

Tomac hasn’t had dominant speed in every moto this season, but he’s done the best job of salvaging points in each moto, which is why his lead now sits at 26 points.

“Usually I have a really good feel here but today I was kind of searching, but that being said the other two guys up here were going fast in those motos,” said Monster Energy Kawasaki's Tomac, giving credit to Musquin and Osborne. “A good day, points wise, but kind of a goofy day. Tough day, this track is brutal as always. I was pretty worn out trying to catch those guys second moto.”

Meanwhile, Osborne is improving rapidly, going 3-1 for second overall and collecting his first career 450MX moto win. Osborne said last week he needed to improve his early-lap sprint speed, and he did just that jetting up to second early in moto one and blasting away from Musquin and Cooper Webb early in moto two to take the lead. Osborne said some mid-race arm pump hurt him in the first moto, as Tomac sailed past him to take second. That spot cost him the overall. Again, small swings in these grueling motos made all the difference.

“I felt really good in the second moto,” said Osborne. “I had a little lull midway through the first moto, and Eli got me and pulled away from me, and from there I knew there wasn’t really any reason to really hammer, so I was maybe able to save a little bit. That benefitted me in the second moto. But that second moto was really the edge of me, the track was really physical. I struggled a lot in practice just finding the dirt, I felt like I was sliding around everywhere. The second moto was like a totally different track, the track really had teeth in that second moto. I’m glad to get the win and get some momentum.”

Cooper Webb grabbed his customary good starts and stayed closer to the front than he has at other races, going 4-4 for fourth. He was happy with the ride.

“Southwick was a step in the right direction for me," said Webb in a team statement. "The day went well and it’s definitely the best I’ve ridden so far. Heading to RedBud, I really enjoy racing there and hopefully I can get on the podium.”

Webb edged Jason Anderson, who went 7-5 for fifth, saying it was a "sub-par day" in a team statement. Anderson bobbled out of the gate in moto one and had to come from way back to seventh, but in moto two started just at the tail end of the lead group but wasn't able to gain ground.

Justin Barcia continues to improve on his Monster Energy Yamaha. While not up to podium potential yet, his wrist injuries have improved, he's making fewer bike changes each week and he's staying closer to the leaders for longer. He was 6-6 for sixth overall.

Fredrik Noren was a revelation in his first race with JGR/Yoshimura Suzuki, going 5-7 for seventh overall. Dean Ferris went 8-12 for eighth ahead of Roczen who was ninth, and privateer John Short rode incredibly well to even pass Roczen late in the second moto. His 15-9 scores put him in tenth overall.

In the 250 class, Justin Cooper showed up carrying confidence after last week’s breakthrough first career win. He was fastest in both practice sessions today and is a noted sand fan, but Adam Cianciarulo showed serious determination by taking the lead away from Cooper early in moto one and pulling away for the win. That was a serious momentum changer. Then things flipped again in moto two, as Dylan Ferrandis got a decent start, then stalked Cianciarulo before getting the lead and taking off with the win. Ferrandis was only third in the first moto, though, so Cianciarulo’s 1-2 scores were enough for the overall win. That’s five in six races this year.

“All of these guys are pushing me, we’re pushing each other every weekend, and it makes the wins feel that much better," said Cianciarulo. "To win five of the first six nationals with the level of competition we have, I can’t tell you how hard it is this weekend to win these things. It’s hard, I’ve put my heart and soul into this. I feel like everything is flowing, the bike is working good. The level is really high right now, you have to have the full package, and I’m grateful.”

"Typically I kind of struggle here," added Cianciarulo. "I didn’t feel too great in practice today, just tried to apply all the things I’ve been working on the past year and made it happen. It feels good."

Ferrandis is back on his game, displayed via second-moto wins at the last two races, but hasn’t put it together enough to win an overall or make up points. This time he said his bike setup was off for the first moto. He got to third and caught Cooper, but bounced off the track twice, forcing him to settle for third.

‘’I think my experience from the GPs helped me a lot, we have a lot of sand races, they are tougher than here and also less fun," said Ferandis, of Monster Energy/Star Racing Yamaha. "So I think the experience makes a big difference. This track is always fun to ride, sand is a different technique. I’m really disappointed in the first moto, I made a bad decision on the setting of the bike. It’s difficult, we don’t have a sand track in California, the one we do have is dry so we can’t really prepare for this race. We tried to do testing on race day, sometimes that works and sometimes it doesn’t. I tried to go in a direction with the team and it didn’t work at all, I was struggling the full moto, I went off the track two times because I was out of control. I managed to finish third, but I think that mistake cost me the overall today. Second moto we made a better choice on bike setup, I was just riding much better and I won the moto. That was a good thing.”

As for Cooper, there were no excuses. He, too, admits he got tired, and that Cianciarulo and Ferrandis were just better on this day.

"All in all it was a good day," said Cooper. "Struggled a bit finding my flow in moto one, Adam got away from me and the damage was done there. Second moto didn’t get off to the best start but I made some better bike changes and I was flowing. I was feeling good out there, I just didn’t have enough at the end."

GEICO Honda's RJ Hampshire was bummed that crashes prevented him from showing his sand skills last weekend in Jacksonville. He was solid this time, coming through the pack in both motos to card fourth each time. Shane McElrath bounced back from a tough start to the season to net fifth overall with 6-7 scores. Alex Martin struggled with starts but came through for 10-5 scores and sixth overall.