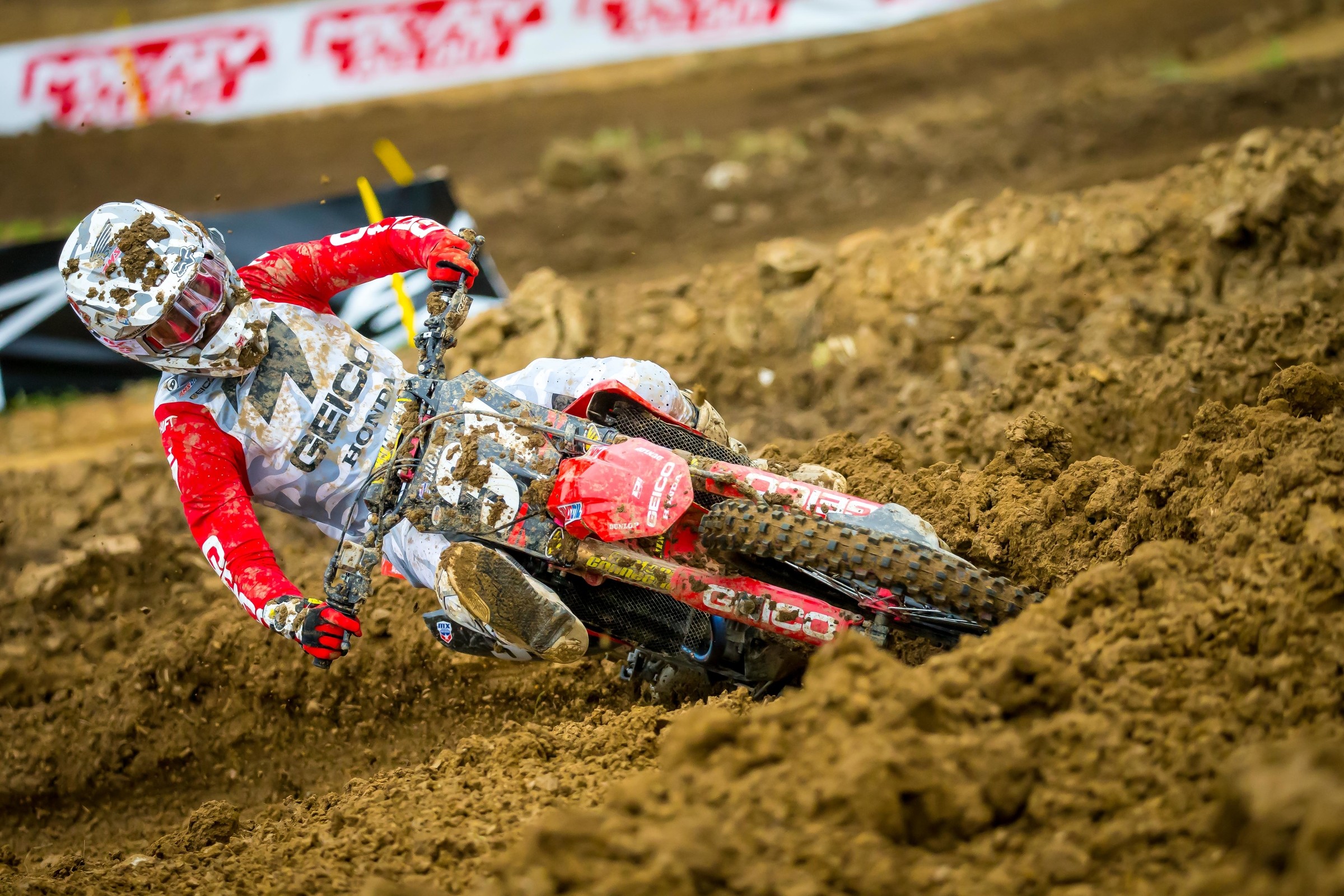 When Adam Cianciarulo rode around with four fingers in the air after winning High Point last week he wasn’t just making sure they were still attached to his hand. The Monster Energy/Pro Circuit/Kawasaki rider was celebrating winning the first four races of the season, which is by far the best start he’s ever had. In fact, it’s a better start than almost anyone (James Stewart and Ricky Carmichael did it in 2004 and 1999). If Cianciarulo goes five in a row in Florida it’ll mark the second-best start (Mark Barnett started with seven in a row in 1981) in the history of the 125/250 Class. –Aaron Hansel

As far as the weather goes, things have been pretty tame so far this year. Hangtown, Fox Raceway at Pala, and Thunder Valley didn’t even come close to providing the punishing conditions they could have, and even High Point wasn’t nearly as nasty as we’ve seen it get in the past. But this is American Motocross, which means it’s only a matter of time before Mother Nature brings the pain, which is likely to finally happen this weekend. Temperatures are expected to be in the mid to high 90s, making the Florida National the first real torture test of the season. We'll see who suffers least when the gate drops at WW Ranch Motocross Park. –Hansel

El Chupacabra was back last week! Well, for the first moto anyway. Blake Baggett, who jammed his wrist at the Fox Raceway National, looked far better than he’s looked all season on the way to his first moto win of 2019 at High Point. He didn’t have the same power for the second moto and ended up 15th after a crash, but if his performance in the first moto was any sort of indicator of what’s to come as he slowly recovers after hurting his wrist, he could become a regular face up front again. –Hansel

If you don’t know who Jordan Jarvis is, you will soon. Last weekend at High Point, the Yamaha rider came oh so close to becoming the first woman in history to qualify for a national in the 250 Class. After not getting into the top 36 in timed qualifying, Jarvis headed to the consolation race (the LCQ of motocross), where she found herself running fifth. Unfortunately she and the another rider tangled and she went down, but for a while she was looking good to finish in the top four, which would have put her in the show in her very first attempt! With a performance that strong you’ve got to think it's only a matter of time before she makes history. Will it happen this weekend in Florida? -Hansel

The only thing normal about Justin Cooper’s day at High Point was when he holeshot the first moto and led for the first six laps. After that, things did not go well and Cooper ended up going 6-9 for ninth overall. Afterward, he owned it on Instagram, straight up admitting he struggled and “got smoked.” Cooper’s shown he’s better than ninth place—don’t expect him to end up there again in Florida. –Hansel

A rule change this year allows amateur riders to try a limited number of pro races but maintain amateur status for the Rocky Mountain ATV/MC Amateur National at Loretta Lynn's. This is actually the way the rules used to be, so it's kind of an old rule returning. Jeremy McGrath won a 125 supercross race in 1989 and raced Loretta's a few months later. This used to be normal!

Anyway, we've been waiting to see what rider will take advantage, and the first major entrant is Troy Lee Designs/Red Bull KTM prospect Pierce Brown. Injuries have decimated the team’s squad as Jordon Smith, Sean Cantrell, and Mitchell Falk are all out, (Shane McElrath missed High Point but should be back this weekend), and Australian fill-in Wilson Todd had to return home. So there's plenty of room under the tent, and Brown definitely has the speed to run at the pro level. This kid is really, really fast. Of course, speed is only part of the equation. Will he be able to handle 30 plus two laps times two on a rough track in the heat against established pros who already have four nationals under their belt this summer? This will be very, very interesting.  –JasonWeigandt

Welcome to the big show @_piercebrown. Young gun Pierce Brown will join the @tld_raceteam this weekend in Florida and line up for his first pro race. #tldmoto #teamtld

Laying Down the Lawrence

Okay, now Hunter Lawrence has really, totally arrived in the U.S. via his first career moto win last weekend at High Point. He didn’t get the overall win but 1-3 scores on a track he’d never ridden before are impressive. This weekend, Lawrence finds some familiar ground at WW Ranch, a track he raced at the 2017 USGP (he finished second overall to his now-GEICO Honda teammate RJ Hampshire). As he keeps building up familiarity with U.S. racing, his new team, bike and all of those variables, you’ve got to imagine an overall win is next on his list. Could it come as soon as this weekend? –Weigandt

Lawrence isn’t the only GEICO Honda rider to watch this weekend. Chase Sexton stepped up his game big at High Point and nearly bested Cianciarulo for the second moto win. That’s familiar ground for Chase, who, um, chases Cianciarulo on the daily around the Moto Sandbox, the training facility they share during the week. The GEICO team made some bike changes after a rough round at Thunder Valley and Sexton and Lawrence both performed better at High Point. Further, Hampshire toughed out a sixth-place overall despite a big crash at home a few days before the race. Hampshire won the MX2 overall at the USGP at WW Ranch in 2017, by going 1-1. If he’s healed up and ready for this weekend, the Florida native will be a front runner. –Weigandt

Even the always-forthcoming Ken Roczen has gotten tired of being forthcoming with negative news, so he hasn’t mentioned whatever virus/illness/fatigue issues he’s been dealing win in a long time. Maybe it has affected him at the races, maybe it hasn’t, we don’t know. What we do know is that the expected heat and humidity arrives in Jacksonville will provide the best physical test to see how strong he is. If Roczen rocks both motos in rough sand and tough conditions, it bodes well for his title aspirations. –Weigandt

We’re still waiting for the Red Bull KTM 450 tandem of Marvin Musquin and Cooper Webb to meet their usual podium standards. Musquin had a good run at Fox Raceway’s round two, but besides that has been below par. He had speed at High Point, but a bad start in one race and a first-turn crash in another ruined his chances. Cooper Webb, meanwhile, was much better at High Point than the first three rounds, but still only ended up fourth overall with 7-3 scores (a gnarly first-moto crash didn’t help). These two teammates haven’t been terrible, but their standards are high and they haven’t met them. Will it all fall into place this weekend? –Weigandt