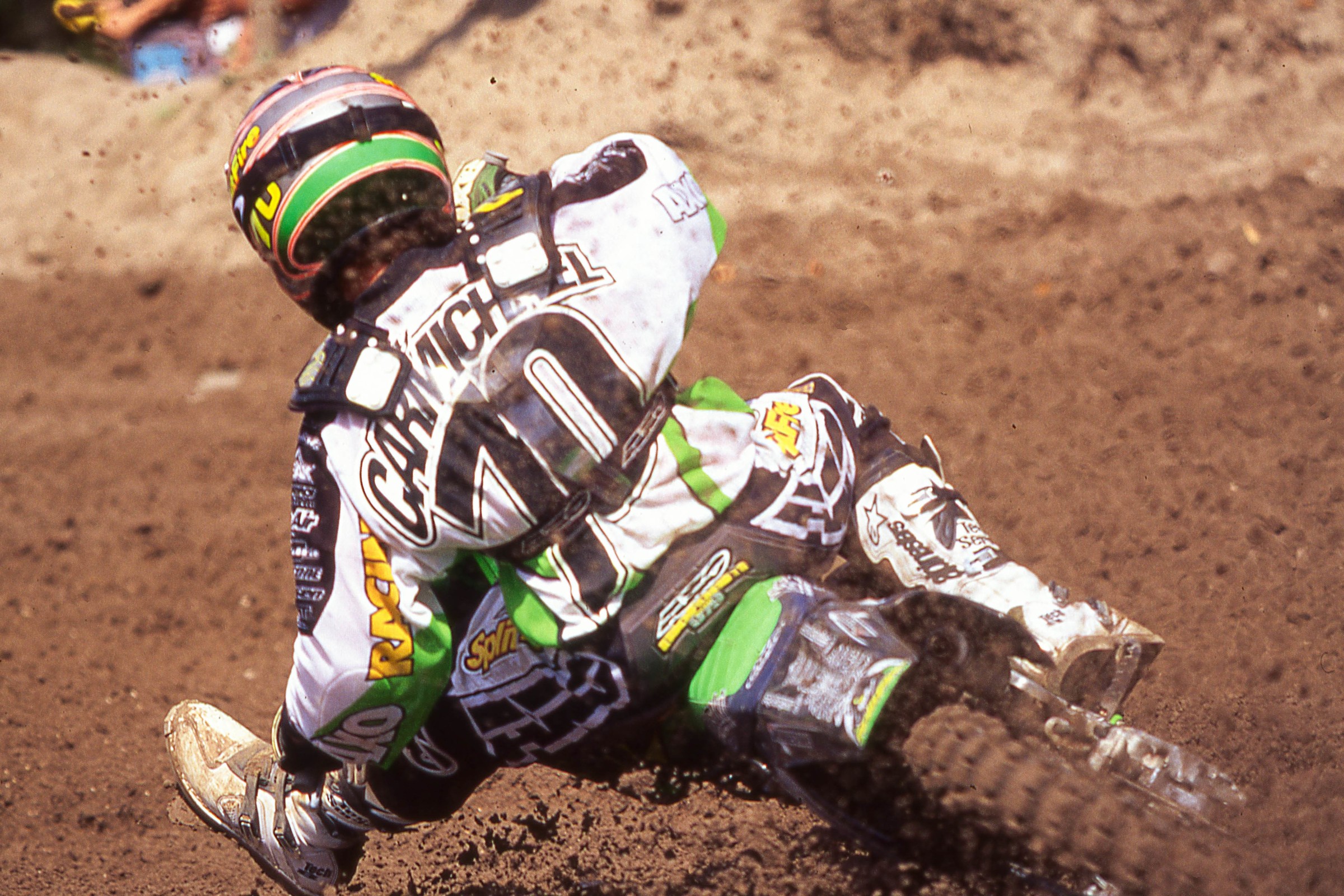 After 22 years, the Lucas Oil AMA Pro Motocross Championship finally returns to the Sunshine State of Florida with Saturday’s Florida National at WW Motocross Park in Jacksonville. The last time Florida hosted an outdoor national came back in 1997 at Gatorback Cycle Park, coincidentally the first outdoor national ever won by Florida’s own Ricky Carmichael, the future GOAT. With the return of pro motocross after so long, we thought we would review some of the big races that happened in Florida in both MX and AMA Supercross.

It all started on a Saturday afternoon on the infield of Daytona International Speedway. It was March of 1971 and Bill France, the owner of the speedway and NASCAR, decided to let dirt bikes be a part of Bike Week. With Gary Bailey’s help, he laid out a track on the infield of Daytona International Speedway, which was celebrating its tenth birthday, and held a round of the Florida Winter-AMA Series. It was a year and four months before West Coast promoter Michael Goodwin invented supercross as we know it in the Los Angeles Coliseum, and it outdated AMA Pro Motocross by just over one year. The winners? Husqvarna riders Gunnar Lindstrom in the 250 class and Bryan Kinney in the 500 class.

By 1973, the AMA had founded its AMA Pro Motocross Championship, so rather than be part of Bill West’s Florida Winter-AMA Series, then the biggest domestic series in the U.S., Daytona signed up as the opening round of that ‘73 AMA Pro Motocross Championship. The race was significant for two reasons. One, it marked Yamaha’s first-ever 500cc win in America, via Pierre Karsmakers, and two, it was also where Honda debuted its new CR250M Elsinore dirt bikes. The riders were Gary and Dewayne Jones, and they did not win. But by the end of ’73, Gary Jones would be the AMA 250cc National Champion, giving Honda its first major championship.

Fast cut to 1974. The AMA has decided to run a stand-alone “stadium motocross” series, and since Yamaha is the primary sponsor, they come up with the name “AMA/Yamaha Super Series of Stadium Motocross.” The winner in the 250 class is Pierre Karsmakers on Yamaha, while the 500cc class win goes to three-time 500cc World Motocross Champion Roger De Coster. One week later the second and final rounds of the series will take place at the Houston Astrodome, marking its introduction to “stadium motocross.”

The opening round of the 1976 Florida Winter-AMA Series takes place at Jacksonville Speedway (no relation to WW Ranch) and the entire industry is shocked by the results. The winner of the 250 class is a kid from Oregon named Rick Burgett, and the 500cc winner is a wild child from the California desert name Bob Hannah. Both were virtually unknown at the time, but Yamaha pegged them as future champions who could show off their new works bikes. A journalist following the series name Jimmy “the Greek” Gianatsis quickly comes up with a nickname for each: Bob “Hurricane” Hannah and Rick “Lumberjack” Burgett.

CBS Sports Spectacular showed up to shoot the 1979 Daytona Supercross and Team Kawasaki’s “Jammin’” Jimmy Weinert used a last-second pass to take the win from Hannah. It was the last win of Weinert’s AMA Motorcycle Hall of Fame career, and maybe the first time anyone celebrated with a no-hander over the finish line, albeit a post-race victory lap after the end of the race.

Just before the 1982 AMA 250 National at St. Petersburg, Honda decides to give a support rider from Florida named Kenny Keylon a full-on works bike. He goes out and decimates the field. His number at the time, #41, reflects where he finished the year before in overall AMA points. It had been since #39 Hannah’s eruption in ’76 that a rider with such a low number from the previous year had burst through like that for a debut win. Keylon’s win remains one of the all-time local-boy-done-well stories in motocross lore; it was also the one and only AMA National up to that point in time by a Floridian.

The 1984 Daytona Supercross was won by David Bailey, but his teammate Johnny O’Mara stole the show when he launched his works Honda off the finish line jump, and the “gator pit” that followed, in a fruitless attempt to best Yamaha’s Ricky Johnson for runner-up honors. It was the beginning of the end of Gary Bailey’s notorious gator pits, and it helped launch the O’Show towards the ’84 title.

In 1989, Florida hosted one of the most shocking upsets in motocross history, French rider Jean-Michel Bayle showed up in a minivan he borrowed from Pro Circuit owner Mitch Payton and entered his first-ever AMA Pro Motocross race. JMB was already the FIM 125cc World Champion, but he was also a teenager and riding a 250 outdoors for the first time that day at Gatorback Cycle Park in Gainesville, Florida. This was the same day that the heavily-favored Rick Johnson broke his wrist in practice, after which all bets were off. Bayle went 1-3 on the day, giving him 45 points. But the race announcer thought that teammate Jeff Stanton’s 2-2 scores were good enough for the overall win, and went to hand him the trophy. Team Honda manager De Coster intervened and explained that Stanton’s 2-2 was only worth 44 points, and thus the win must go to Jean-Michel Bayle. “The Man” was right.

In 1993, rookie sensation Jeremy McGrath was running away with the AMA/Camel Supercross Championship on his CR250, yet he had been dispatched to the 125cc Class outdoors. At the Gatorback series opener he finished second in the first moto, then found himself trailing veteran Honda of Troy rider Erik Kehoe at the end of the second race. McGrath almost had the pass just before the steep finish line jump, only to see Kehoe hit it wide open and launch the #33 Honda into the stratosphere in a last-ditch attempt to hold on to the win. The photo snapped by Paul Buckley immortalized the moment and remains one of the most talked about motocross photos in history.

And there is some kind of poetic justice that the last AMA Pro Motocross National in Florida would mark the first outdoor national win for Florida’s favorite son of motocross, and the entire sport’s GOAT, Ricky Carmichael. In 1997, RC, then all of 17 years old with exactly one outdoor national experience under his belt, went 2-1 to topple Steve Lamson, at the time the best 125cc rider on the planet. It was the first touches of paint on the masterpiece that would become Carmichael’s motocross career, where he would win 102 of a total of 127 nationals started. That’s like having a batting average of .750… But the promoter of the event back then, Bill West, decided to sell that race to his partners in supercross, and the Gatorback National became the Tampa SX in 1998. The winners? Larry Ward in the 250 class, and that Carmichael kid in the 125 class. That made ’97 the last outdoor national in Florida until this coming weekend’s return to WW Ranch Motocross Park in Jacksonville. However, supercross has never stopped competing in the Sunshine State. Below are a few more highlights:

In 2000, in another nod to the Sunshine State, Ricky Carmichael wins his first-ever premier-class Daytona Supercross, and he did it emphatically through the 21st lap after the head flagman missed him and gave him the white flag twice! It was his first of 48 career AMA Supercross wins.

In 2005, everyone thought that Daytona would be Ricky’s race to lose, and he did, as Chad Reed put on a stunning performance to beat the heavily favored RC aboard a factory Yamaha YZ250.

A week later, supercross stayed in Florida for a race in Orlando, and it marked rookie James Stewart’s return to the 250 Class after breaking his arm early in the season. The Orlando race was expected to be an all-Florida battle between Stewart and Carmichael, but both crashed, and Reed went on to take that one as well!

Maybe the best AMA Supercross race of Stewart’s epic career took place at the ’07 Orlando SX, Carmichael’s last SX race. James and Ricky put on an epic duel, but Stewart’s flawless, mistake-free riding at the front made it a bitter loss for RC. He did get even though in beating Stewart at all six of the AMA Pro Motocross races he would enter later that summer as part of his farewell tour.

The 2008 Daytona Supercross was won by GEICO Honda’s Kevin Windham, but it was really lost by Reed, who’s bike expired halfway through the last lap of the 12-lap main event after his motor sucked in too much water in what could only be described as a monsoon.

Ryan Villopoto won the 2013 Daytona Supercross on the way to what would be a third straight Monster Energy AMA Supercross Championship. Ride along with him right here:

In 2017, Florida hosted its one and only FIM World Motocross Championship race. The MXGP of the USA was supposed to be held at Gatorback, but a problem with the landowners meant a location change to WW Ranch. The lead-up to the race was besieged by rain, but once it stopped fans saw Florida’s own RJ Hampshire win the MX2 Class and the sensational Dutchman Jeffrey Herlings top the MXGP Class after splitting moto wins with Eli Tomac.