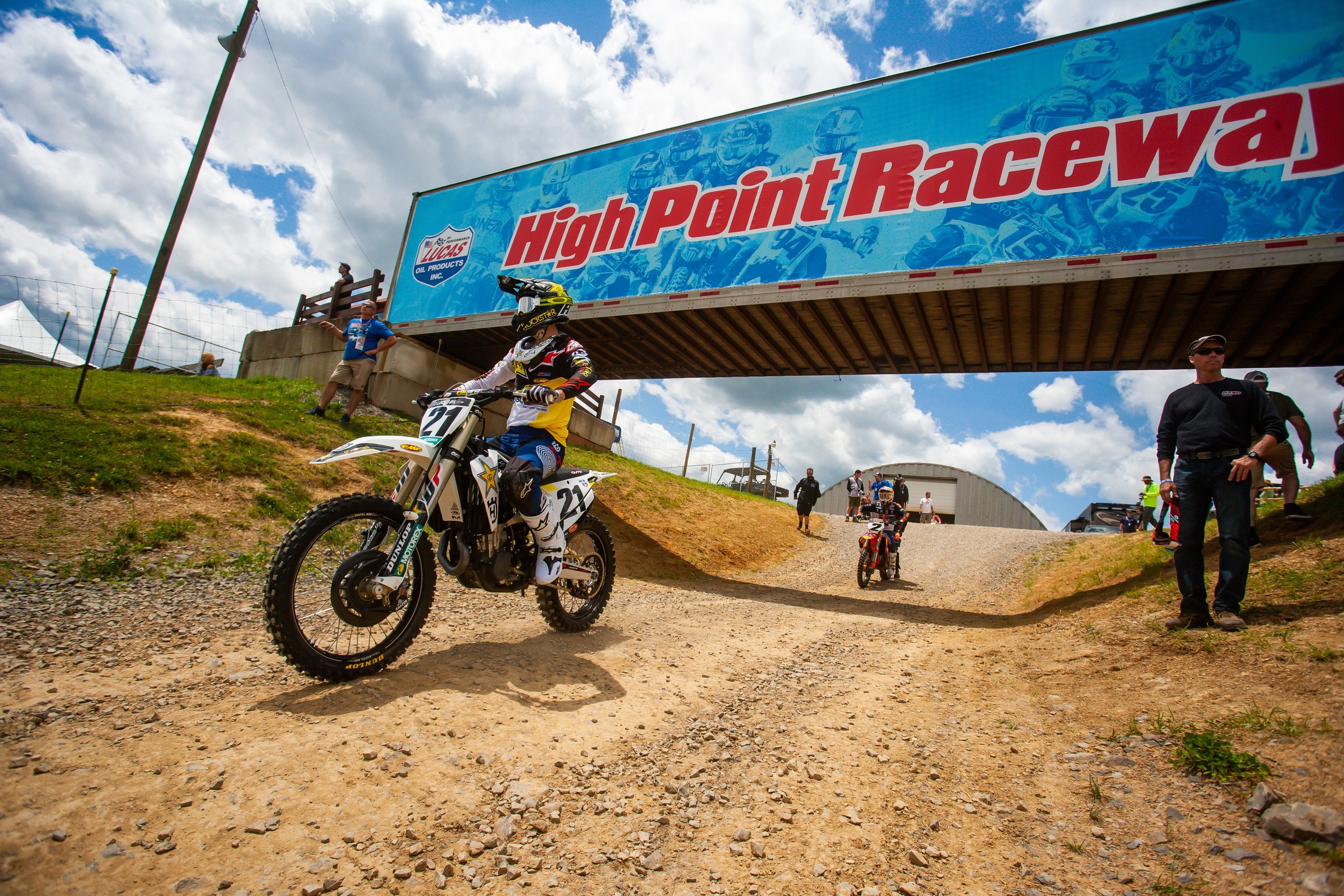 Welcome to the Racer X Race Day Feed, coming to you from High Point Raceway in Mt. Morris, Pennsylvania. From practice reports to the blow-by-blow from tonight’s motos, you’ll find it all right here on the Racer X Race Day Feed. Updates are posted in chronological order, so be sure to scroll down for the latest info. For even more updates be sure to follow us on Twitter, @Racerxonline.

The weather yesterday for press day was perfect, and it appears we are in for similar conditions today. Clouds early this morning teased the possibility of rain but so far, the rain has held off. There is a chance for rain later today so we will see if it becomes a factor later on. Yesterday during press day, several riders had the opportunity to preview the track for today. Several changes to the track were made leading up to today, including the sections of the track farthest from the starting gate—watch to see how it impacts the racing today.

Honda HRC’s Ken Roczen will bring his CRF450R to the starting gate today with the red plates. Following his 1-2 finishes at the Thunder Valley National, Roczen holds a two-point lead over Monster Energy Kawasaki’s Eli Tomac, even though Tomac’s four moto wins lead the class. In the 250 Class, Monster Energy/Pro Circuit Kawasaki’s Adam Cianciarulo has a six-point lead over Monster Energy/Yamalube/Star Racing Yamaha’s Justin Cooper. Both Cianciarulo and Cooper each have three moto wins to their name, but Cianciarulo has taken the first three overall victories.

Red Bull KTM’s Cooper Webb led the field early with a 2:09.312, followed my Eli Tomac, Marvin Musquin, Blake Baggett, and Justin Barcia. Today we are getting our first glimpse of Rocky Mountain ATV/MC-KTM-WPS’ Benny Bloss, who is making his 2019 debut. Bloss, who suffered a torn ACL in December leading in into Monster Energy AMA Supercross, momentarily held the top time early in the session. Rockstar Energy Husqvarna’s Zach Osborne was also atop the board before Tomac settled in and took over. But by the time the session was done, Webb had recorded the fastest time with a 2:05.892.

Monster Energy/Yamalube/Star Racing Yamaha’s Mitchell Oldenburg took the top spot early with a 2:08.821. Oldenburg is making his respective 2019 Pro Motocross debut after an injury suffered at the supercross finale kept him out of the first three rounds. Rockstar Energy Husqvarna’s Michael Mosiman took over the top spot until Adam Cianciarulo dropped a heater. When the session had finished, GEICO Honda’s Chase Sexton took the top spot with a 2:05.702.

Roczen, Tomac, and Rockstar Energy Husqvarna’s Jason Anderson battled for the top spot, trading places early. Osborne and Blake Baggett, who won the 2017 High Point overall, got into the mix as well until Musquin dropped a heater, a 2:03.209. Musquin’s time looked like it might take the top overall spot on the day until Anderson dropped a blazing 2:02.846 at the very end of the session to grab the fastest qualifier spot for the day.

Once the gate dropped, it was clear that the lingering injuries Baggett had from the Fox Raceway National seemed to be a thing of the past. He edged out Webb and Monster Energy Kawasaki’s Joey Savatgy for the holeshot and got out to an early lead on the rest of the field. Baggett started taking heat from Tomac and Webb but mistakes from both riders eventually let Baggett get a large lead—over 10 seconds at one point—before he ran away with the win. Tomac tipped over in a rutty turn and lost several positions, falling back to fourth behind Webb and Anderson. Anderson caught and started battling with Webb before finally making a pass stick, which allowed Tomac to catch up to both of them.

Webb, who had been smooth all morning until now, soon stalled his bike, which allowed Tomac to take over third and Roczen to catch up to the #2. Musquin did not get a good jump when the gate dropped—he came through the first lap in 10th—but made his way up to the back of Roczen. While Musquin was making his way up to the front pack, he was pulling along Osborne with him, as the 450 Class rookie was glued to the back of the veteran rider. Musquin and Osborne finished fourth and fifth, respectively.

Although it appeared that Webb had significantly gained from the week off as he came into the morning qualifying hot, his race went downhill as the moto continued, had a hard get-off in the rollers. Webb remounted before finishing the moto in seventh. Baggett qualified third today and continued to build his lead over the field throughout the entirety of the moto. Anderson had the speed to catch Baggett but the gap was too much for the Husqvarna rider to overcome. Coming into the day, Baggett’s last overall win came two years ago at the 2017 High Point National, when he finished 1-2. Let's see if he can repeat that performance—or go 1-1.

Tomac seemed like he was going to be able to catch Anderson but wasn’t able to as Anderson set course to catch Baggett. Tomac wasn’t disappointed with his ride but said he will have to limit the mistakes in the second moto.

“Just got to be better next time though,” he said after the moto.

Cooper Webb wasn’t the only Cooper who’s first moto of the day went downhill, as Justin Cooper’s undefeated first moto streak came to an end. Cooper grabbed the holeshot but was getting heat quickly from his teammate Colt Nichols and GEICO Honda’s Hunter Lawrence. The #32 was pretty smooth and going fast, but he wasn’t been able to break away from the rest of the pack. Behind Lawrence was a third Monster Energy/Yamalube/Star Racing Yamaha—Dylan Ferrandis. Ferrandis tried to make an inside pass on Lawrence in the turn following the up-hill double but bobbled and went outside, which allowed Cianciarulo to sneak inside and take over fourth place. Cianciarulo had Lawrence on the inside of a turn for third but wasn’t able to make it stick as Lawrence passed him on the following straightaway. Ferrandis took advantage of Cianciarulo going outside leading into a tabletop and took over fourth. It seemed like Nichols was running at a faster pass than Cooper as he’s come close to the back of his teammate but was unable to take a faster line to take the position. Sexton got off to a bad start but was able to gain ground on everyone ahead of him. Lawrence got around Nichols on the turn leading into the wall before the downhill rollers section and on the very next lap he made a pass on Cooper to take over the lead in the same spot.

Ferrandis and Cooper met in a line that resulted in Ferrandis bumping Cooper off the track. As the two are teammates, it didn’t appear to be anything other than the two taking the fastest line—Ferrandis said after the moto that it wasn’t intentional, he just felt he was faster and had made the pass on Cooper so he had the right of way. When Cooper went off the track, AC got around Cooper too. After taking the lead, Lawrence ran away with his first Pro Motocross moto win of his career.

“It’s awesome, it’s just a moto win but it’s a big milestone in our journey…this is huge for all of us, [I’m] so stoked,” Lawrence said after the moto.

When the gate dropped for the second 450 Class, Savatgy grabbed the holeshot and Musquin went down early. Webb, who struggled as the first moto ran one, took over the lead through the downhill rollers section. Monster Energy Yamaha Factory Racing’s Justin Barcia got a great start and ran in third early on but Roczen flew past him on his way to the lead. Savatgy would eventually finish in sixth place, Barcia in 10th place. Roczen, who came through the first lap in eighth, made a race-long charge to the front and eventually ran away with his first second-moto win of 2019. Although Roczen won the second moto, Tomac’s 3-2 moto finishes topped Roczen’s 6-1. Through four rounds of the 2019 Lucas Oil AMA Pro Motocross Championship, Roczen and Tomac are now tied with 176 points apiece.

Nichols grabbed the holeshot and led the first four laps of the moto before Cianciarulo took over. At the start of the race, Ferrandis and Cooper were nowhere to be found. The two rounded the first lap in 10th and 13th, respectively. Ferrandis was able to make his way up to fourth, although he finished 29.338 seconds behind AC, and Cooper recorded a ninth-place finish in the moto, but finished over a minute and 10 seconds behind AC. The #92 finished six seconds ahead of second-place Sexton, and man, was he smooth. He was picking all the right lines and was flying but was under control the entire moto, but Sexton didn’t give up without a fight. He logged the fastest lap of the moto but Cianciarulo simply had his number. Cianciarulo got a better start this time around, which aided in his fourth second-moto victory of the season. His 2-1 moto finishes give him a 26-point lead over Cooper, as AC gained 22 and 25 points today, respectively, compared to Cooper gaining 15 and 12 points, respectively. While this championship is far from over, Cooper can’t afford many more days like today.