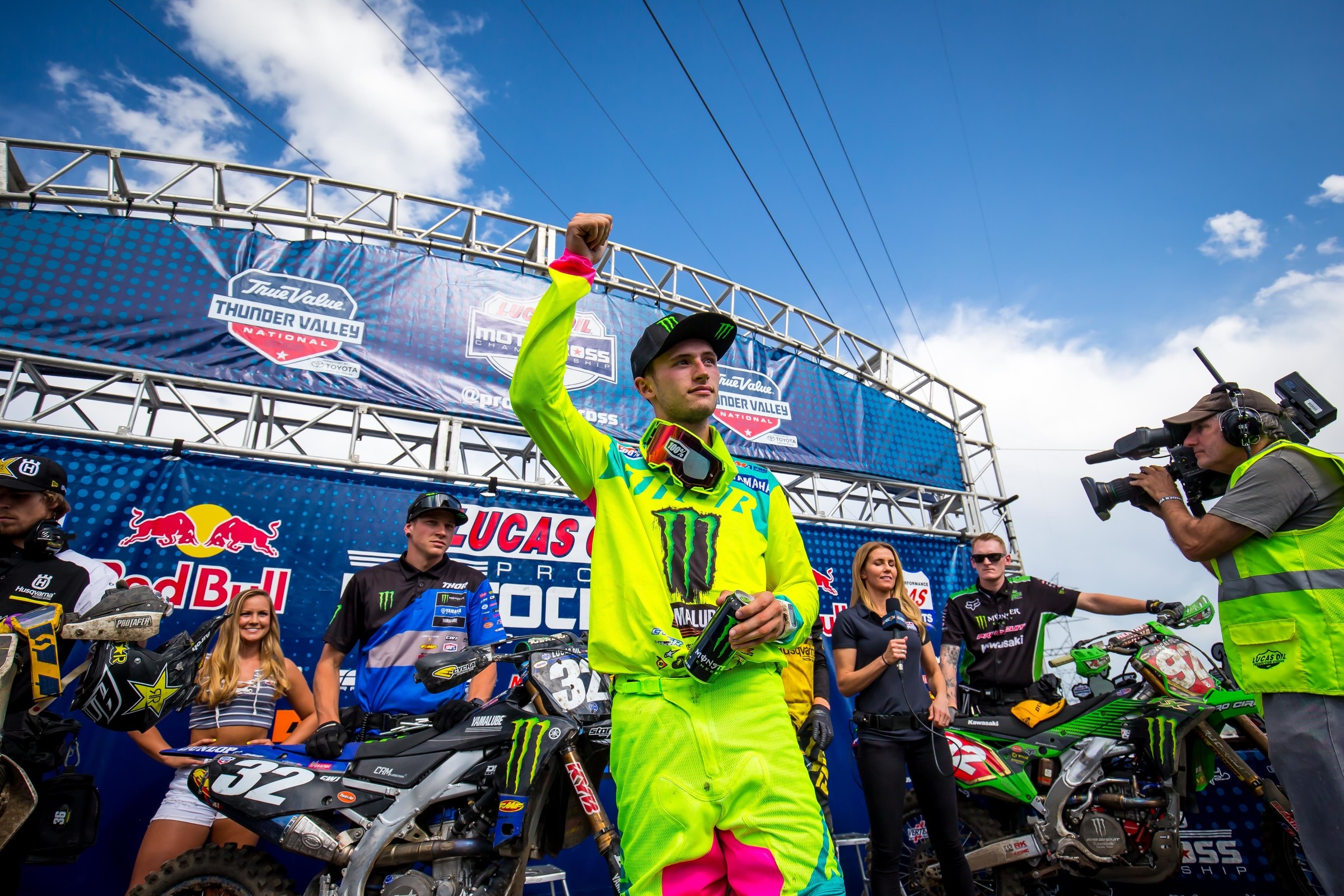 On August 12, 2017, at Unadilla MX in New Berlin, New York, Justin Cooper went to the starting gate for the first Lucas Oil AMA Pro Motocross Championship of his career. The winner of the Loretta Lynn’s Nicky Hayden AMA Horizon Award winner placed 12th in the first 250 Class moto but bounced back to score a runner-up finish in the second moto.

The Cold Harbor Springs, New York, native finished fifth overall and was then duly awarded with a ride on the Monster Energy/Yamalube/Star Racing Yamaha team for 2018 and beyond. And ever since, things have gone quite well for a racer who entered the professional fray without a lot of hype and circumstance. After hitting the podium in the 2019 AMA 250SX East on six occasions, the Monster Energy/Yamalube/Star Racing Yamaha teamster slotted-in at an excellent second overall in the title struggle. From there it was on to the Lucas Oil AMA Pro Motocross Championship where he won the opening motos at Hangtown, Fox Raceway at Pala,  and Thunder Valley. Second overall to Monster Energy Pro Circuit/Kawasaki’s Adam Cianciarulo (who also won the first three overalls of the new season), Cooper is right there ready, willing, and able to win huge races. It’s been quite a while since such a young professional came out of the box to strike fear into the hearts of the established guard.

On Friday, Racer X spoke with this year’s new sensation.

So what beach are you going to hang out at?
I’m thinking Laguna Beach or Huntington Beach. I like to walk around down by the beach or I’ll sit on the beach. Either or. I’m probably just going to lie out on the sand this weekend. I may go in the water a little bit to, depending on how the weather is.

Nice to have a break, huh?
Yeah, it is and it isn’t. I’d prefer maybe four or five or six rounds before we had. It’s kind of like we’re still starting off right now. I mean we’re only three rounds in. When you’re in race mode, it’s nice to have a short week and then you can go right back racing, but all in all, everyone is doing it. It’s not a bad thing, that’s for sure. But things are going good and I’m feeling good, so why not just keep the ball rolling. But it’s nice to have an off weekend to have a little fun, I guess.

Yes, as you just alluded to, things are going quite well for you in the 2019 Lucas Oil AMA Pro Motocross Championship.
Yeah, I was definitely nervous before the season started, but everything is pretty much going according to plan. I’m still working a few things out. I think we’re just going to get better as the series goes on. I’m feeling strong every time I line up and that’s a good thing. I just want to keep it going as it is.

You’ve won the first moto at Hangtown, Fox Raceway at Pala, and Thunder Valley, but went 4-4-2, respectively, in the second motos at these events. Thoughts?
Yeah, it seems like every time I put myself in a good position after the first moto and then the second moto comes around and I’m either buried, or like with what happened last Saturday, we got out front and ended up having that crash. It was a shame but I’ll just learn from it. It happens. We’ll just keep moving forward and keep going after that overall.

Yeah, but with the way you’ve been riding, that overall and second moto win are both likely to come real soon.
Yeah, it’s just frustrating because I’m obviously looking for that win. I’ve been so close at the first three races. It’s nothing to get worked up about. It’s still awesome. It’s a long series and I’m just going to keep plugging away and it’ll be here before I know it.

You placed an excellent second overall in points in the 2019 250SX East Region. Did supercross and all the podium finishes you posted up help you when the outdoor season kicked off at Hangtown?
It was different because I didn’t have both series last year. It was kind of different to end the supercross and then go right into the outdoors. I wouldn’t say it helped me, but it was definitely a solid year for me in supercross and there’s something positive to build off of there. We were doing all the work for the outdoors in-between supercross races towards the end of the series. We definitely didn’t come in underprepared for outdoors.

Unless I have it wrong, and I don’t think I do, it’s been a fair amount of time since a young, first or second-year rider has raced so well and generated so many positive and encouraging results. Anybody said anything to you about all that?
That’s what I’ve been hearing. I’ve heard it. That’s what everyone has kind of been saying. I mean I like hearing that; I like to be unique. It’s definitely not a bad thing to come on like this. The plan is to just keep it going. There’s not a time where I go out there not looking to win. That’s going to be the plan. I feel like I deserve to be up on top and that’s what we’ve working so hard to get. No reason to back down to anyone.

To your way of seeing things, just what has made you excel thus far in the outdoor series?
Honestly, I just kind of just jell with the outdoors. I’m very smooth as a rider and I can jell with the tracks pretty nicely and find smooth lines and just ride around smoothly. Once I’m in my comfort zone and riding the way I want to, it’s pretty easy for me to go even faster from there on. I think staying around the track helps a lot; it helps me get faster as a rider.

When you’re out there amongst the madness of a 250 Class moto, how has the competition looked to you?
It’s stacked. The starts are definitely helping, but it’s definitely tough to come through the pack. Everyone [is] riding really good and everyone is training really hard, so there is not a lot of separation. When you do get out front, you have to take advantage and kind of try to separate yourself from the pack. Yeah, you can’t really take a down a notch or be comfortable in the lead because they’re always charging and coming at you all of the time. It’s tough. It’s pretty much a 35-minute sprint every time I’m out there. That’s what we’ve come to know going to the gate.

Right on, Justin. So far, so good. I’m assuming all of this has been pretty fulfilling for you.
Yeah, it is a good feeling. I’m kind of just living in the moment as each race goes and kind of surprising myself every time out. The confidence is definitely going up each time I go out and I’ve been getting good feedback from the team and everything is coming along nicely. I think we’re going to start prevailing when it really matters in the series.

Can you win this thing come the Ironman National in late August?
Oh yeah. We know we can win it and that’s been on our minds. We’re not trying to think about it too much because we know it takes 24 good motos. The bad days are going to come, but we’re going to have to salvage what we can on those days. Hopefully we can just keep putting ourselves in a good position off the starts. That’s been working real good for us.