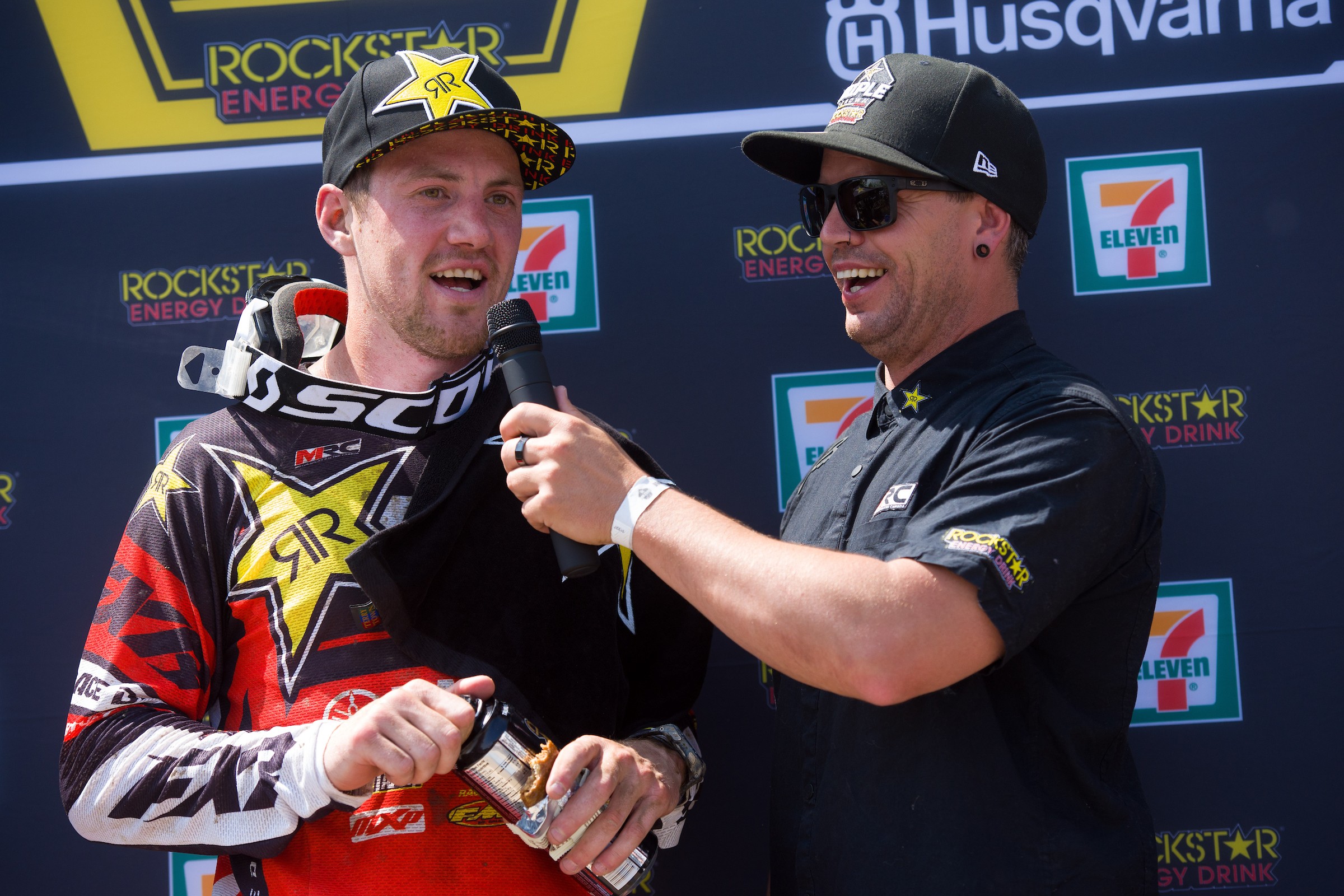 In typical “Filthy” Phil Nicoletti luck, the veteran rider went 2-2 for third overall in the 450 Class at the first round of the Rockstar Energy Triple Crown Motocross Championship last weekend. If you missed it, Josh Osby went 2-2 in the 250 Class for the overall—but Phil wasn’t so lucky. Nicoletti had speed all day but stalled his bike in the second moto, which allowed Mike Alessi and Colton Facciotti to pass him. “Filthy” was unsuccessful in starting his bike for several seconds, but once he was able to get going again his speed was too much for the Honda riders as he repassed both riders to finish second.

We caught up to him after the race.

Racer X: Very good day today. Really fast. Josh Osby wins the overall with a 2-2 in the 250 Class. You go 2-2 and you get third.
Phil Nicoletti: Yeah, that’s my f****** luck. It’s hard because the bonus money was a big difference. I felt like I showed what I’m capable of. This type of dirt is not my cup of tea. Just second moto I stalled it and then it just flamed out. Then I couldn’t get the son of a gun going. As soon as it did I was like, time to shit and get. I just figured I had to get Colton and Mike. It’s just one of those days.

You got to be happy though, after stalling it and being tired. You know how that works. You got up. You tracked down Colton. That’s a really impressive ride.
I feel really fit. This is the best I’ve actually felt in my career. I’ve had a lot of prep time coming up here so I was able to do a lot of different things training that I wouldn’t necessarily be able to do in the States. My trainer, Seiji, did an awesome job with it. Also riding at Club[MX] makes a big difference and grinding with the kids and stuff. I am old. I’m 30, but I still feel 18. That’s what’s good about it. I still feel like I’m riding like I’m young. My team did good. I’ll give a shout out to Joe Skid, SSF Suspension. He’s done a really good job with my stuff. I’m not going to lie—I was a little critic at first and kind of worried, because I didn’t know the guy. But my bike works really well. I’m bummed to go 2-2 for third. I think they know who was fastest today.

You were catching Cole [Thompson] in that second moto. Did you have a spot where you liked him or where you thought you could get him?
Yeah. I felt like I could have gotten him anywhere. It took me a little while to get going, but I didn’t feel like I was really trying. I felt pretty effortless. I was just going to stalk and stalk and wait. We had broken Mike and Colton at that time, so I had plenty of time to work on Cole and stuff like that. It’s just a bummer deal. I’m still bummed about the 2-2 shit, but it’s cool. It was actually good. It was hot today. I’m happy. It was a good start. I’m just glad to be back to some real racing.

What happened in the early laps of moto two that Cole got back around you?
I blew off the track on the back in the rollers and then he snuck under. I’m like, son of a bitch. Like I said, I wasn’t worried about it. I wasn’t flustered. Plenty of time to make moves. Just relied on my fitness.

I really thought you wore down Colton and Mike in that second moto. They had a nice lead on you when they got by you and you just wore them down.
Yeah. Like I said, I feel fit. I feel strong. Speed feels good. I think when we get up to Prince George, they say it’s more my kind of track, a little sandier and stuff like that. I think we’ll really be able to let the balls drop a little more and send it.

In my experience, guys like this track or they don’t like it at all. There’s not a whole lot of middle ground. Where were you at?
I don’t know. I like it and I didn’t like it. Some spots were really good. Some spots were sketchy as f***. So it was one of those deals. They did an okay job. There was plenty of passing lines. The ruts were really good. It actually reminded me of Colorado second moto. Hard base and big, deep ruts. I tried to make some different lines work. Didn’t quite work. The middle stayed pretty muddy all day. Other than that, I’m stoked to be up here in Canada. It’s a cool venture. The guys are still fast and still good competition.

What’d you think of the fans and the atmosphere and all that?
Everyone’s been good. A lot of people came up. A lot of bullshit Pulp[MX] fans, which is cool that people follow it. They’re taking a warm welcome.

You flipped off one guy in the first moto.
Yeah. I f****** seen red for a little while. It sucked because I gained two seconds on Colton and then I lose three and a half because I got stuck behind a lapper. Then that guy just made me f****** red line and then that was it. I had to do it. After I got off the track I’m like, man, I shouldn't have done it. But whatever. I don’t care. I just wish it was in the back where nobody else could have seen it.

You got a boot deal coming maybe?
Yeah, right. I can hardly get boots at the moment. I’ll leave that to my bulls*** agent.