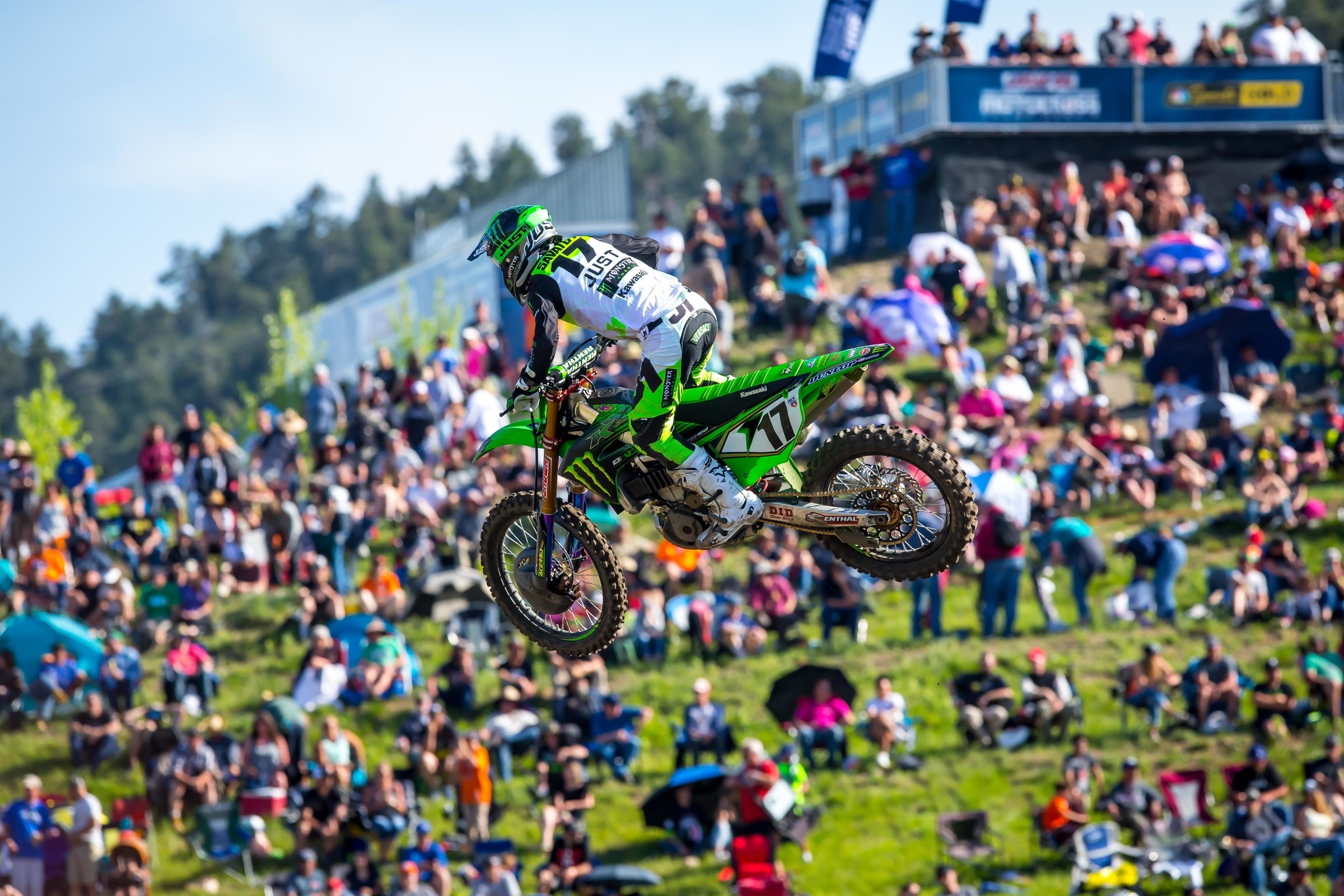 Monster Energy Kawasaki’s Joey Savatgy missed the first two rounds of the Lucas Oil AMA Pro Motocross Championship with an injury from Monster Energy AMA Supercross but returned for the third round Thunder Valley National last weekend. Savatgy said was he not ready physically or mentally but will take the off weekend to do more testing before the High Point National on June 15.

Monster Energy/Yamalube/Star Racing Yamaha’s Ty Masterpool got his day off to a great start by grabbing the holeshot in the first 250 Class moto. He faded back to fourth by the end of lap one before finishing in sixth. A crash resulted in a 16th-place finish in the second moto, giving Masterpool 13th overall on the day.

On paper it was nothing to talk about. We had I think six total days of riding leading into this, and one test day. We had two test days, but the second day was only a little productive. All in all, we’re far behind everyone else. Everyone else had time and a lot of testing and we didn’t. This was worst case scenario. Worst case scenario we showed up and weren’t ready, or settings were off. But now we have a weekend off. We’re not in the greatest spot and we need to fix things, and now we have a weekend off to kind of figure it out. We’ve got two whole weeks, not just four days. It’s tough, man. You can’t be behind the eight ball with these guys. There are a lot of really gnarly dudes up there [at the top of the 450 Class], and for the most part a lot of them have been healthy and have gotten a lot of testing done. We haven’t. We’ll go back to California this week, do more testing, and try to get ready. That’s all we can do.

Racer X: Talk about that second moto. Were you using it to test? Is that why you were in and out of the mechanic’s area so much?
Joey Savatgy: Yeah, pretty much. The first moto we were just going to try to wing it. We got a decent start, I think sixth or seventh-ish, and I was fighting it and ended up going down. From there we came in one more time and it wasn’t great. The second moto, it wasn’t exactly the plan, ideally. We made a lot of changes, I don’t think the bike was the same all day. Ideally, we would have gone out for the second moto and gotten lucky and been on the money. But we didn’t so the backup plan was, "Hey, if we don’t nail it, let’s take advantage of this 30 [minute moto] plus two [laps]." You have to at least get a direction. That’s the hard thing. I can say the bike doesn’t work, or I’m not ready, or a combination, but until we know exactly which direction we need to go, it’s tough. Pretty much the second moto was trial and error, trying to figure out which direction we need to go, so we know for this week what we’ll work on. It sucks and it’s tough for me to show up and not be mentally and physically ready. But at the same time there’s only one way to get your feet wet, and that’s to show up and race. It sucks. I’ve had a lot of good success here in the past and I always feel really good here. It’s unfortunate. Today was one of those days where you have to lick your wounds and move on.

The first moto was very good. I got the holeshot and just rode smart and savvy. I felt really good and got sixth, I believe. Then, second moto, I think I got a third-place start and was riding pretty good and another guy kind of took me out from the outside and I went down. I hurt my shoulder a little bit and was just kind of in survival mode from there on. Not exactly how I wanted it, but the adversity gave me some good experience. I’m looking forward to going out East.

Racer X: What was it like being up there in that first moto, and how’d you keep yourself calm? Was that even an issue?
Ty Masterpool: I felt really good. I was just focusing on myself and riding my best. Whether I’m in 20th or top five, wherever it is, I just do my best and looking at the big picture of the years to come. I was just focused on myself and felt good.

Did the pace up front surprise your or did you feel comfortable?
Oh man, there’s a lot of respect for those guys. They’re going fast out there, they’re definitely flying.