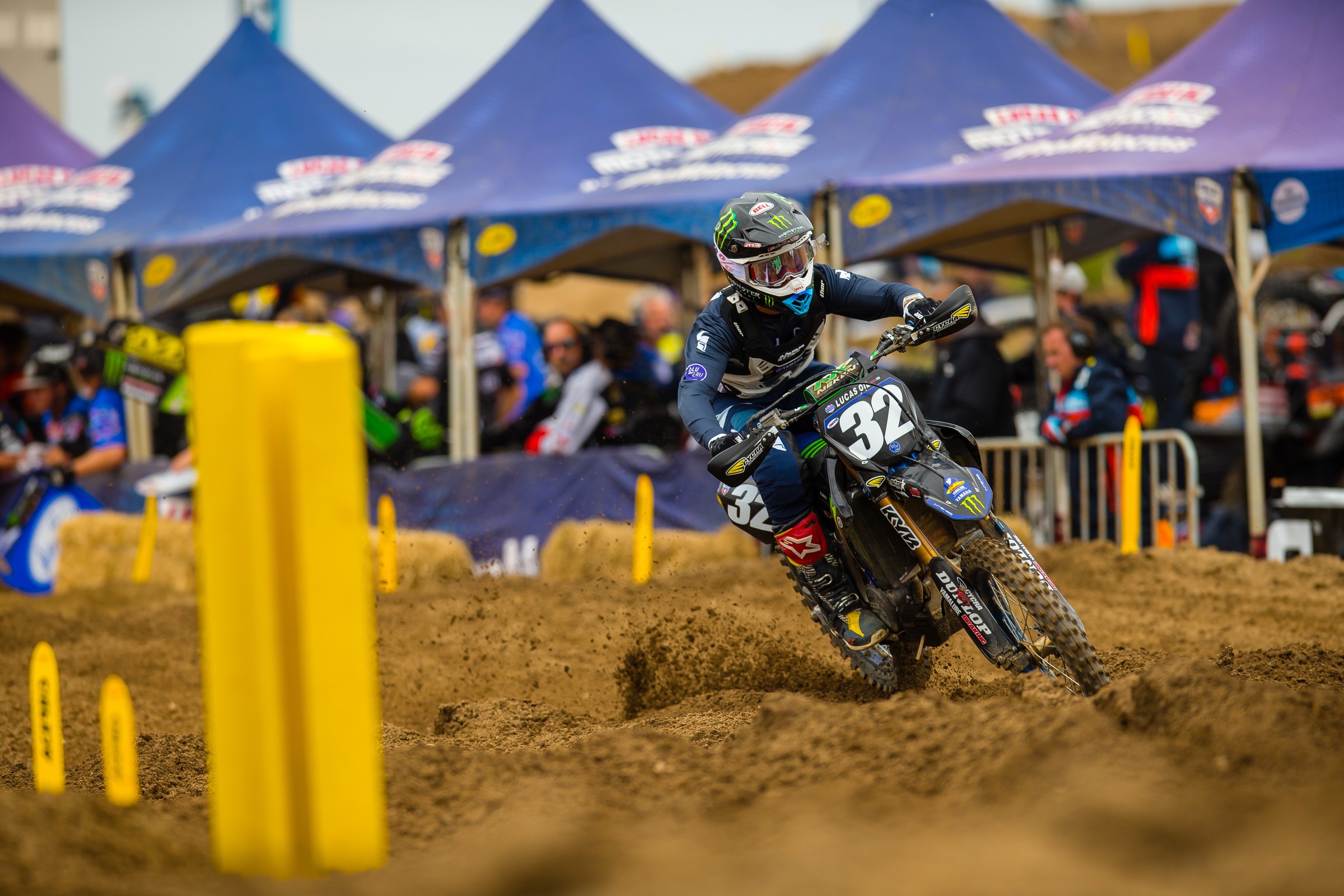 Adam, your second pro win in your career at the outdoor level. This one was a little bit different than the last one. Tell us a bit about it.
Cianciarulo: Obviously coming into the season I have a lot to prove in outdoors. I haven’t been consistently that good. I had a good year in supercross. It didn’t end great, but still felt confident coming into the season. Justin [Cooper] was riding really good in that first moto. We both got a good start and I felt like we were being kind of smart, kind of pacing each other a little bit.. Kind of see how the track was coming around. He rode great. I kind of pumped up a little bit in the first moto, honestly, which was super weird because I don’t pump up too much. But he rode great. Kind of sprinted away at the end, and then I had Dylan [Ferrandis] and Chase [Sexton] really coming for me the last couple of laps so I had to fend them off. Then the second moto was just all about the start. I was able to get around Colt [Nichols] on the outside there before you go up the hill and just had to stay focused. Put your head down, stay focused. I lost my goggles with like four laps to go. I don’t think I’ve ever done a race with no goggles before, so I was kind of freaking out a little bit. But it feels good to get the first one out of the way and to have a good result.

Justin, moto number one was a pretty historic ride for you. Take us through what it was like to get back to the truck knowing that you had just picked up a win?
Cooper: The feeling was indescribable. It was awesome. I got a great start. I felt so nervous going into that moto. The first moto of the year. You’re like, wow, we’re here. We’re doing this now. It was great to get a good start and just pacing everyone. I pumped up as well. The track was a little awkward out there. I felt like the ruts were weird. I wasn’t flowing, but I was able to ride through some arm pump and get away towards the end when Adam started pressuring me.

Colt, third on the afternoon. I know that the supercross series has been kind to you as well, but the outdoor series, what’s it like getting on the podium at round one?
Nichols: It’s right where I wanted to be. I don’t really think a lot of people in fantasy had me picked for third, but I feel great though, especially the second moto. Practice and the first moto was kind of awkward for me all day. Kind of that first race bike setup and first race jitters going on. It feels good to be right in the thick of the championship. This is where we wanted to be obviously starting off. The goal is just to kind of shoot for a top five and kind of keep building throughout the season. So to end up on the podium, we’re right where we want to be. It feels good to share the podium with these guys and go into round two and see where we are again.

Colt, talk about heading into that first turn in the second moto. Obviously it’s a drag race and you’re trying to keep vision clear, but it looked like you were not shutting off for anything.
Nichols: Yeah, I got a hell of a jump and kind of looked to the left a little bit and I didn’t see a front wheel. I was like, okay, I got this by a mile. I was not going to shut off. With the mud it’s so crucial to get a good start, and I executed it just perfectly. I exited the first turn and had a huge gap on everybody. Adam was able to get by me in the second turn. That was alright, though. I just kind of wanted to pace him a little bit and see where we were. Just made a few stupid little mistakes. Didn’t ride that great in the first ten minutes. Got stuck behind a lapper. It actually kind of helped me a little bit. After that I kind of got to reset a little and go back after A-Mart [Alex Martin] and tried to get him. But the start was perfect.

Can some of you guys go into a little bit of detail in how tough the track got with the rain? It looked like there were a couple sections where you had to really tip-toe downhill.
Nichols: Yeah, really had to tip-toe, to be honest. The first lap, even when we took the sight lap, I was like, “Okay, it’s not that bad.” I think you could still go out and kind of do it a little bit and kind of similar to the first moto. Just had to maybe be a little more cautious. It seemed like about fifteen minutes in it just got really all of a sudden just bad. I felt like I was tip-toeing everywhere. But just direct deterioration from the rain. It’s slowing everything down and making it really, really slick, so you really had to be on your toes and stay extremely focused throughout the whole race.

Cianciarulo: I think it’s one of those tracks where the harder you tried, the worse you did. You had those ruts coming down the long hills and the bumps in the ruts, it’s so hard to keep your back wheel planted in those ruts when you’re coming down. It wants to skip out and go side to side. When I was behind Justin I saw him do the same thing a couple things. Kind of come into a G-out when you turn into those bumps and it wants to come out. I did the same thing. I think everybody was struggling with that today. It’s hard coming down those hills to really commit to being off the brakes and kind of just coasting and being on the balls of your feet. That’s really your best option. I saw Ken [Roczen] obviously had a great first moto and he’s so good at that. So that’s part of the reason why. Just can’t try that hard out there. It was a tough track. I think it kind of made us all feel like we were a little bit beginners out there.

Cooper: Adding onto that, the downhills got really treacherous. We had a bad first moto with that and the second moto it was just that much worse. We had to really tip-toe through there. If you tried to charge and lost your balance, you were going for a ride that you didn’t want to go for. So, we just had to kind of salvage points. In the mud you can lose a lot of points in a hurry. Glad to be out of here with some good points and just moving onto next weekend and having a good start here.

Adam, you and Kenny winning on the same day, I know you’re buddies. You both rode through the highs and lows together. How cool is it to see him win as well as yourself?
Cianciarulo: Yeah, it’s awesome. We seem to have good days and bad days. If I’m winning he’s not doing good, or vice versa. So to put it together for us on one day, it’s super cool. He’s been there close with me since the start of my pro career, and the same with him. I saw him in 2015, 2016 where this guy couldn’t go any faster on a dirt bike. Then to see the stuff he’s gone through, I was there with him through that too. I just think we both have a mutual respect for what we’ve gone through because we are with each other a decent amount of time. I actually haven’t trained with him here a few months since I’ve been in California, but I look forward to going back to Florida and being with those guys, Sexton and Alex Martin as well. It’s awesome. It’s awesome to see him do good. It’s always good to see your friend succeed.

Have you two leaned on each other during some of the tough times for each other?
Cianciarulo: Yeah. It’s tough. It’s one of those things where when something bad happens, like for instance me, Vegas a couple weeks ago, what are you really going to text me and say? It’s hard. I think because he knows everything I’ve gone through, I think when he’s gone through some of those bad moments it almost gives what I have to say some credibility because I’ve been there. I thought I was done. So I think there’s been a couple times where we’ve leaned on each other, but we both know how to get through it. So it’s cool to see him do good.

You said on Thursday that you felt that you were probably going to be okay and the supercross thing was behind you, but how good is it to just get this win to officially know that you’re back on top and just get that out of the way?
Cianciarulo: Yeah, it’s nice. More so I think just outdoors, like I said a little bit earlier, I haven’t been that good outdoors really, consistently in the past. Here and there a moto, but I haven’t been that good. So just to know we’re on the right track to start it off. Obviously, kind of weird conditions today. It’s the first round. Everybody’s nervous, like Justin said earlier. So it’s a nice indication. With that being said, we need to keep the pedal down. Twenty-two motos to go, so we’re excited.

Colt and Justin, talk about your experience growing up with years probably riding mud in Oklahoma and New York or local tracks and how that experience helps on days like today.
Nichols: It was huge for me. Definitely spun a lot of laps at Reynard Raceway in the mud. I definitely think it helped. Even at Anaheim 1, I just felt really comfortable in those conditions. Same thing with today. I just knew I needed to get a good start and see what happened. It’s really, really easy to make a mistake. Usually when the track gets a little slower I tend to do a little better anyway. Played right into my wheelhouse today luckily. Could have very easily went the other direction. It felt good to get on the podium. I was happy with the way I performed.

Cooper: To be honest, I think I did most of my mud riding in the early days of my amateur racing, probably 85s, 65s all that kind of stuff. Kind of avoided it when it did rain up in New York. Honestly, I was probably better back then because I didn’t feel too good out there in that second moto. I don’t think anyone did. Definitely should probably get out in the mud a little bit more. It’s hard in California because it’s always sunny. I think I could definitely excel in it a little more.