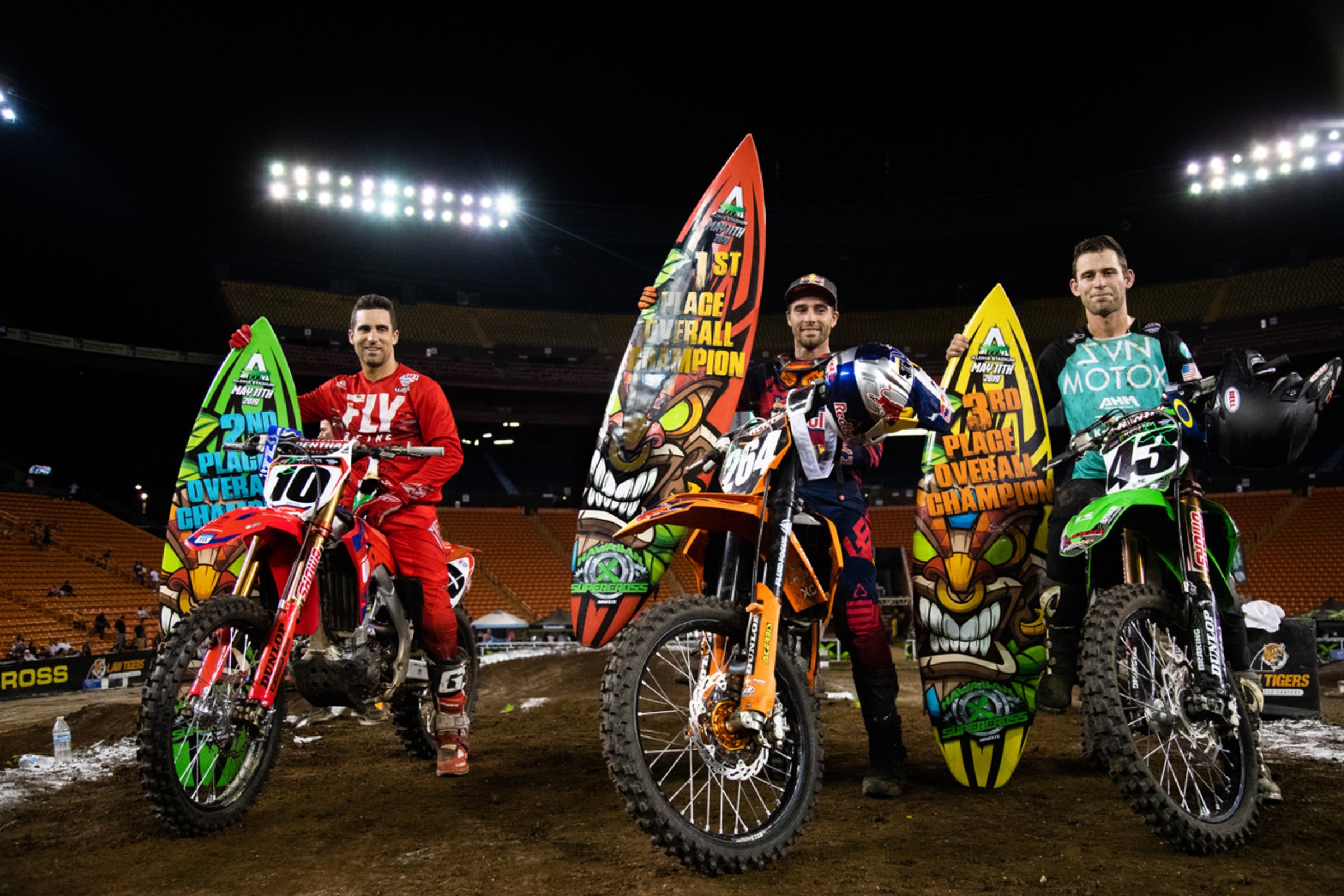 A one-off race in Hawaii is bound to create more fun than serious racing, but there was one man in the group with serious motivation to capitalize on an opportunity. Races like this don’t count for points, titles or bonus money, but that suits Ryan Sipes’ program perfectly, because he never races for points, anyway. “Mr. Versatility” just drops into events at anytime, anywhere, and as soon as he jumped into the Aloha Stadium track, he felt comfortable and logged the second-fastest qualifying time. Realizing the night could be his, he focused on the task, executed like the 34-year-old veteran he is, and added yet another unexpected notch on a belt that’s practically falling apart due to all of those notches.

The Hawaiian Supercross made a return for the first time since 1986, at the same Aloha Stadium that hosted the old race way back when, and also hosted the NFL’s Pro Bowl (all-star event) for decades. The event piggybacked on a Monster Truck event held last weekend, and timed out perfectly with Monster Energy AMA Supercross wrapping up in Las Vegas. For any rider not overly concerned with outdoor testing for this weekend’s Lucas Oil AMA Pro Motocross Championship opener, this was a chance to vacation on an island with a few extra bucks profit, to boot. The stars were Justin Brayton, Jimmy Decotis, Mike Alessi, Kyle Chisholm, Alex Ray, Adam Enticknap, Tyler Bowers, Josh Hill, Ben LaMay, and Austin Politelli. Sipes was a late add. He’s in the middle of prep for both the Springfield TT in a few weeks, as well as a first attempt in hard enduro at the famous Erzberg Rodeo. For that, he’s been practicing in extreme terrain with EnduroCross ace Cody Webb. But Sipes raced supercross last month in Nashville and nailed a top-ten 250SX finish. He packed up that bike and those skills for Hawaii.

The land was the real draw for most of the riders, anything in Hawaii quickly becomes a vacation, and many riders chose to leave the designated downtown Honolulu hotel behind for beach digs elsewhere. Can’t blame ‘em. And, even though the flight from LAX to Honolulu is nearly six hours, riders who are married with children bought the whole family to the race. Well, really, to the island. The race was just a quick blip on the vacation schedule.

Sipes was on a 250F, compared to the 450s throughout the field, but that probably turned out to be an advantage. The track was tight and slick, and he felt he could cut under the other riders and get traction where they couldn’t. Perhaps that’s the bike, or perhaps it’s Sipes’ versatility showing through. As a part-timer in American Flat Track, he’s certainly practiced and raced more on slick, flat turns than anyone else in this field.

He had to get a start on that 250, though, which he did by letting the big bikes beat him to turn one and drift wide. Sipes snuck inside and emerged about third in all three of the Triple Crown races. In race one, he battled Politelli and Decotis early, until Decotis secured the lead and started checking out. Jimmy D had a good story going. He was originally sourcing a brand-new RM-Z from Hawaiian surf legend and moto super fan Sunny Garcia, but Sunny, sadly, is in a bad way following depression and a reported recent suicide attempt. Both the surf and moto industry pray for Sunny’s recovery.

Jimmy sourced another brand-new Suzuki at a local shop. Except… it was a 2014 Suzuki RM-Z450! Jimmy and a few buddies at the track (including Justin Brayton’s mechanic Duffe) changed the oil and checked the bike over. He installed his works forks, but his 2019 shock didn’t fit the 2014 chassis. Regardless, Jimmy rode the wheels off that five-year-old bike, passing Sipes and pulling away early. Sipes dug in, studied lines, and figured out where he could gain time. With two to go he was all over Decotis, and in the last turn on the last lap, he moved inside for the pass. Jimmy D tried to hold the line, contact was made, and Jimmy ended up off the track while Sipes sailed to the win with a last-turn last-lap pass. The crowd loved it!

About that crowd: about 15,000 fans showed up, and while Aloha Stadium holds much more, the building is clearly designed to amplify sound, so it felt like 50,000 when the cheers came. The event featured some freestyle (including Ronnie Mac) and the John Desoto Cup for local Hawaiian riders. Desoto, by the way, is 71 years old but even swung a leg over his Honda 450 and did a lap of the track in opening ceremonies! There aren’t any supercross tracks on any of the Hawaiian islands, by the way, so this was a new challenge for the locals. Yes you had the standard crashes, but no one got terribly hurt, and the crowd loved the island versus island des Nations style format. The home island, Oahu, won it, which drew more cheers. Nineteen-year-old Donovan Canionero is generally considered the fastest Hawaiian rider right now, and he lived up to that by winning all three races.

As for the pros, Brayton was the favorite coming into the race, but he’s still not 100 percent following his nutty crash at the Seattle Supercross. In race one, he drifted too far wide off the start and had to come through the pack. In race two, he got a better start and grabbed the lead, with Sipes moving into second. Then, almost surprisingly, Sipes started reeling Brayton in!

Brayton was a little better in the whoops, Sipes was better in the corners. Sipes caught up to engage in battle, and the two veterans settled in for a game of chess. Sipes had several creative lines to make the pass, but Brayton, schooled in arenacross and these tight off-season races, knew exactly how to block. At one point, Sipes nearly tagged his wheel and crashed, which blew his rhythm through the next set of jumps, allowing Brayton to get away. But Sipes started catching him again! Once again it came down to the end, with Sipes making a clutch pass just before the white flag to steal yet another win. Sitting on 1-1 scores for the last race, Sipes had a cushion to work with.

Onto the final race, with Sipes facing the pressure to get one more start on his 250. He tucked inside again, came out third again, and engaged in battle with Brayton again. Sipes didn’t have to win the race to win the overall, but these two vets are good buddies (and former teammates a decade ago with MDK KTM) and decided to have at it. Once again, Sipes outfoxed Brayton late to take the win, a 1-1-1 sweep, and another resume bullet in what has become one of the most diverse careers in dirt bike history. At this point, maybe the most diverse.

That’s why Sipes was so motivated—any time he can snag a win in his wild run through everything, it looms large. For everyone, this was a fun Hawaiian vacation, but for Sipes it meant a little more, and it showed. Aloha, mahalo. “Mr. Versatility” can win anywhere.