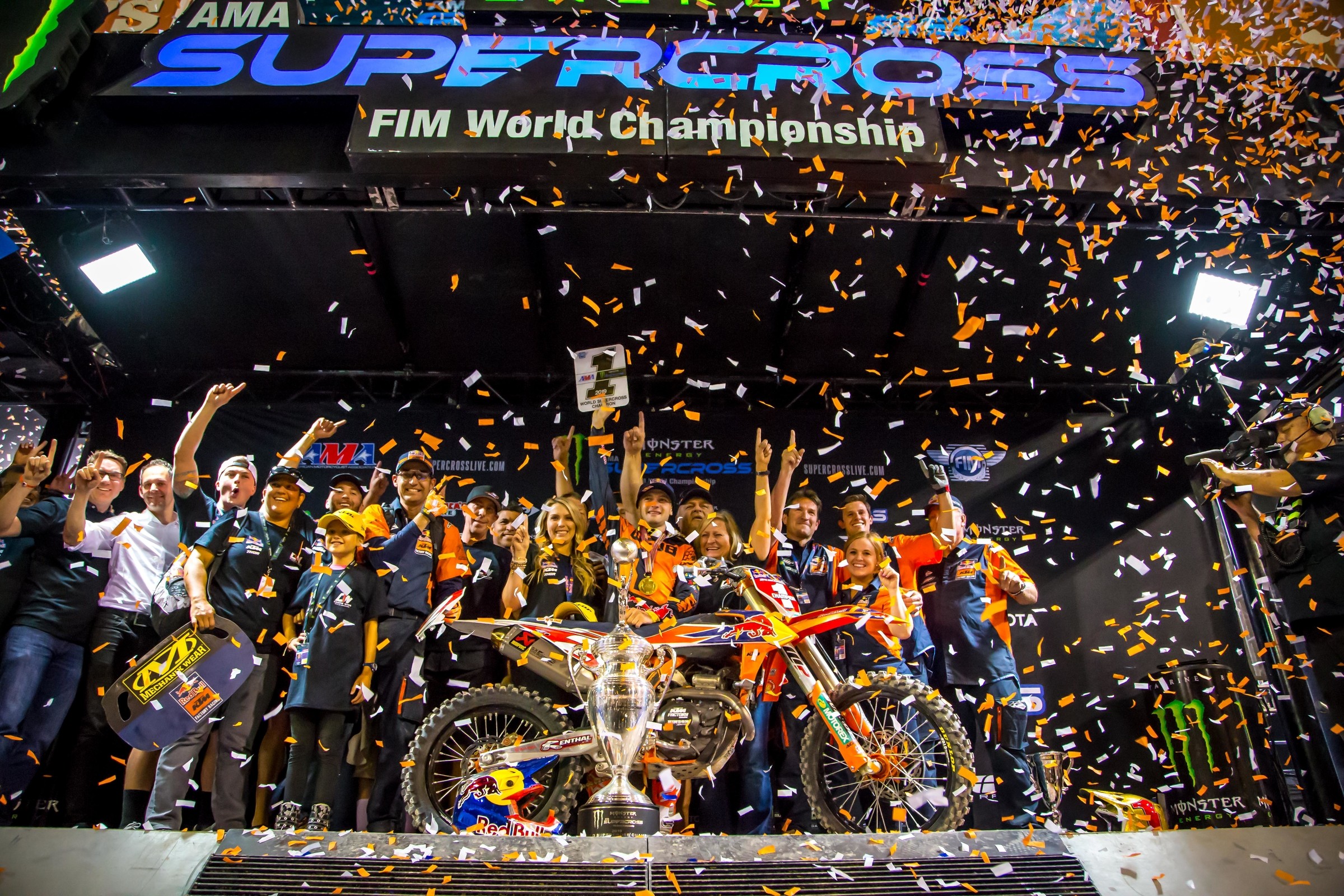 The championship finale for Monster Energy Supercross placed three championships in the air, each hung on tension that says anything can happen in racing and especially racing in Las Vegas. To that end, this year’s race produced two titles won in procedural fashion, but one lost in a heartbreaker that opened the door for a long-odds jackpot fitting for Sin City. The whole season was a perfect reminder of the variables of racing, because none of the three eventual champions were atop the pre-season favorites in their division. In fact, none of the three had so much as won a race in their class before this season. This dynamic year points to the variables of racing, which makes Red Bull KTM’s Cooper Webb drive to the 450SX Championship even more impressive. Tonight, he rode almost exactly the same as he has all year: He got the start, he got a podium, he earned a number-one plate virtually no one saw coming. Including himself. And he didn’t do it with world-record speed, but rather smarts and grit.

“It was a huge learning experience for me,” said Webb. “I took some of the things I learned in the 250 class, but this class is so much tougher. After the first two [wins] it was a huge confidence booster, I wouldn’t say there was one moment [where it really sunk in that he could win the title], but as we come toward the end you start to realize it can happen. What a journey. It’s crazy really. I’m in shock.”

Webb was simply steady all day and night. He wasn’t as fast as Monster Energy Kawasaki’s Eli Tomac, but then again when Eli is on, going faster isn’t easy. Tomac was super aggressive on the big Vegas track, saying “I was hanging it out” as he described some mad bombs through the track, from wild (and fast) practice laps, to a heat race when he caught Webb, nearly crashed, then reeled Webb back in for the win. In the main, Tomac nailed the holeshot and was flawless from there. Unfortunately, he was also 23 points down on Webb entering the event, so the title was beyond his reach.

“Well, it’s putting the whole season together,” said Tomac of his trouble spot. “I’ve just got to fill the gaps, and we just haven’t done that yet. I felt like at the beginning I was playing catch up, but I feel like at the end we hit our stride. That was it, took too long playing catch up.”

Webb’s teammate Marvin Musquin slid past Webb early to take away second place, and tried to keep pace with Tomac. He couldn’t, but did take a solid second, and third for the year in points.

“Finishing second the year before I was looking for one more step and to win a championship,” said Musquin. “It started very rough, as you know, but I don’t want to keep saying that over and over. Anyway, I just had a solid program and just tried to be my best going into the championship. I tried to get to 100 percent as soon as possible. I was doing pretty good, doing my best to win main events. We got to fight for the championship, but I wish I could have fought to the end.”

It’s the errors of Tomac and Musquin, in comparison to Webb, that tell the story of this season. Tomac will go back to work on filling in those gaps. Musquin said he doesn’t think any of his crashes—and he also had too many this year—were the result of pushing too hard. He never felt over his head. Sometimes in racing things happen, but they did not happen to Webb this year.

As for the rest of the 450 pack, Ken Roczen looked good all day but still doesn’t have his usual spark. He outdueled the recently-rejuvinated Zach Osborne for fourth. Roczen’s teammate Cole Seely logged one of his best races of the year by passing Blake Baggett late for sixth.

Onto the wild 250 class, which had both titles up for grabs in the stacked 250SX Dave Coombs Sr. East/West Showdown. But Adam Cianciarulo (West) and Chase Sexton (East) had points to work with, Adam needing a fifth if Dylan Ferrandis won, Sexton needing sixth if Justin Cooper won. Sexton had the easier task, because Cooper looked off all day and wasn’t a factor. Ferrandis, meanwhile, put huge pressure on Cianciarulo because he rode the best supercross race of his career. He also nailed his first good start all year, just behind RJ Hampshire. He blasted into the lead immediately and rode clean, forcing Cianciarulo to get that top five to hold on.

During that challenge, Cianciarulo found himself pitted against three GEICO Hondas, with Cameron McAdoo logging his best race ever running second for a long way, and Sexton and Hampshire were also in the mix. Cianciarulo got into third and had it under control, until, with three minutes left, the nightmare began: he crashed, he got up with a twisted bike that was impossible to ride fast, and he was done.

“I said to my mechanic, just tell me what place AC is in, I don’t care about my lap time or my gap,” said Ferrandis. “The truth was, if he was in second behind me, maybe I would just try to fight with him, I don’t know. Then I saw on the pitboard, he was in tenth, and a lap later he was twentieth. I can’t believe it was happening.”

Ferrandis pulled clear of the field. Meanwhile Cianciarulo, on his twisted and bent machine, just rolled around until the end, not giving up, but ending up far short of a title. As Ferrandis was celebrating, Cianciarulo rolled the finish line, stopped to grab his mechanic, and began the long ride back to the pits.

Did Ferrandis expect to emerge as champ?

“Honestly no,” he said. “All week I told my wife and DV [David Vuillemin, trainer] I go for second overall in the championship. AC had done good starts all year and for me, I have not. I had to push for the start this week. I was clear with the team all week, we changed everything for the start, the bike, my position, everything. We went back to our base and focused on the start. Still, it was try to take the win, second overall, and take a nice bonus check. When I saw on the pit board he was 10th, it was just crazy. He was so good all season long, it was hard to believe he made a mistake.”

Ferrandis crossed the finish with the race win in hand and the knowledge that the title, improbably, was his. He blew his engine in celebration.

“I broke my engine after the finish,” he said. “I just held the throttle open and closed my eyes because it felt like a dream. I wanted to do the burnout at the podium but the team said you can’t because the engine is broken.”

Sexton was across soon after in fourth (his teammates Hampshire second and McAdoo third), more than enough to win the 250SX East title. The wildness of that series occurred a month ago, when Austin Forkner crashed and ruined his knee. Sexton took over from there. He did admit that the whole week and the race day was weird compared to normal, and he was nervous.

“It feels super good, hasn’t really sunk in yet, being 19 years old and winning a championship,” he said. “It was a long 15 minutes, track was gnarly. I was fourth or fifth the whole moto. Yeah it was a super sketchy track, and the whoops were gnarly, had some moments with my teammate, and there were some haybales knocked out on the track.”