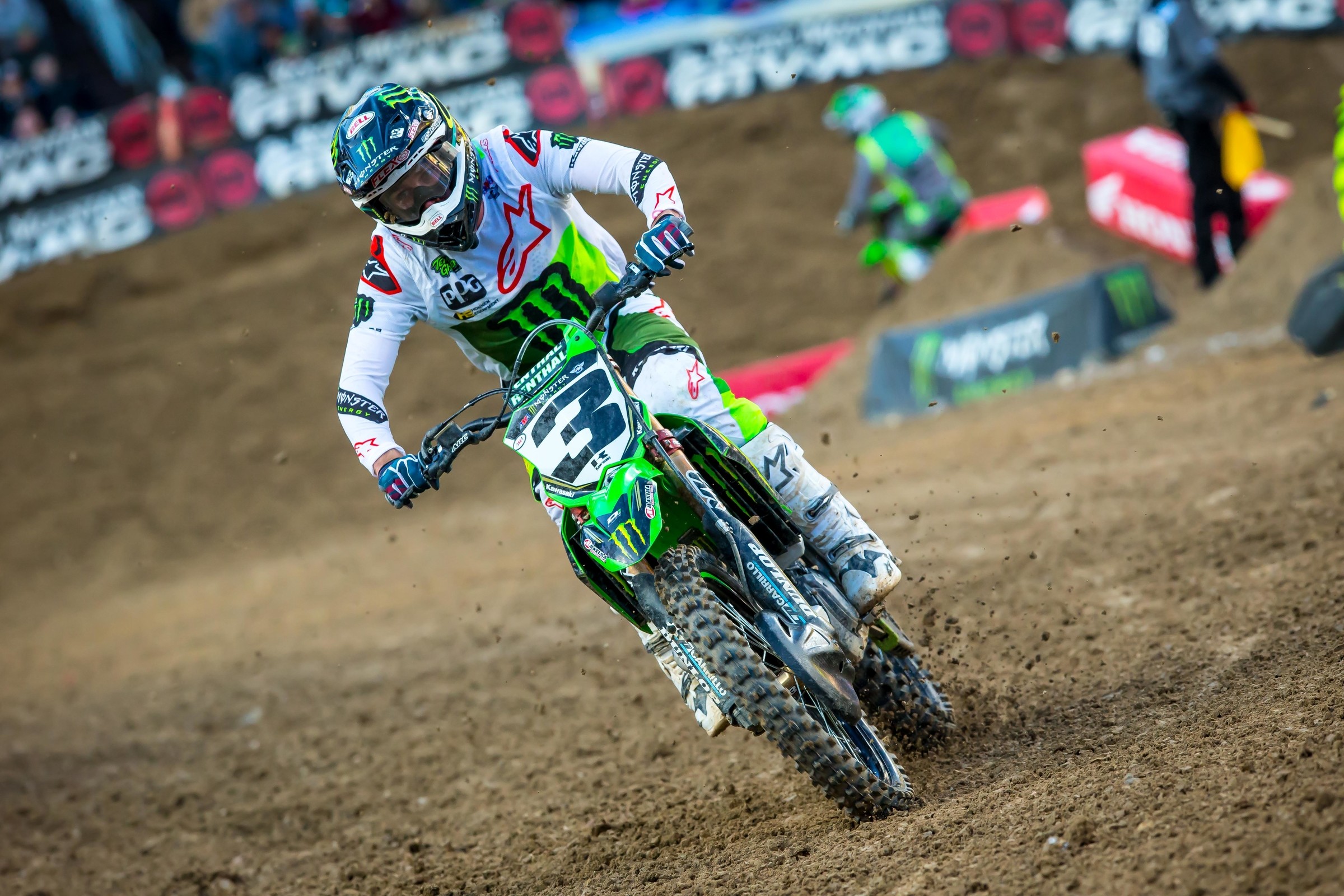 “Obviously, my expectation is to go out there and fight for as many wins as I can and try to get a championship, too,” said Monster Energy Kawasaki’s Eli Tomac before the season-opening round of Monster Energy AMA Supercross in January. Now, almost four months later, he has five main event wins but unfortunately sits 18 points behind championship leader Red Bull KTM’s Cooper Webb. Tomac has finishes of 1-4-3-4-1-1 in the last six rounds, but with only two rounds remaining his time is running out.

We caught up with Tomac recently to talk about his season.

Racer X: Eli, I’ve noticed in the past couple of weeks you’ve mentioned in the motocross media that to get this sport right, and to get this sport right at your level, takes a very big window and that window is often times quite small. Can you elaborate on that?
Eli Tomac: Yeah, for sure. When I’m talking about that window, I’m talking about track conditions and how you’re feeling comfortable in those conditions. The window is a combination of both, riding and track conditions.

And the sport of supercross is so much about the rider on the bike with his feet and hands and body weight controlling and optimizing, correct?
It is. And to be winning, you have to have all that together, you know? That’s what’s cool about supercross, it’s a lot about the rider, but at the same time, to be at the top you do have to be on it with your motorcycle as well. So it has got to be a total package.

Yeah, in this modern era all you have to do is look at the factory teams in supercross. These factory teams have a lot of employs put into the team, as well as money and time. That’s a serious race effort, huh?
Yeah, that’s right. Now, we try to do what we can with data and try and translate that to the riding. Sometimes that doesn’t always translate to what I feel on the bike as a rider, but we always need to gather as much data as we can and apply it on race day.

At the somewhat recent Indianapolis, Seattle, and Houston rounds of the series, you went 4-3-4, respectively. However, you convincingly won the last two rounds at Nashville and Denver. Thoughts on your late season surge?
Yeah, so before those two races I was just struggling with overall comfort. It was a little bit of both me being comfortable on my motorcycle and getting through the full 20 minutes of a main event. I feel like we, as a team, made some improvements and I made some improvements and it all sort of just comes together. I was just kind of searching throughout the season and these last two race wins have been in the right spot and come in the right way. Before it seemed like everything had to be in the right position for me to go out there and get it done. I’m hoping now that we’ve figured out a few things.

Yeah, a supercross main event basically gives you 20 minutes to work with from the drop of the gate to the checkered flag. Not a lot of time to work with, huh?
Yeah, that’s right. You can only do so much until you race. I mean everybody says it, but it’s the truth: You don’t really know where you are at until you go racing. Yeah, I just felt like at the beginning of the season that I was a little behind in that way.

Tomorrow night’s race at East Rutherford, New Jersey, will feature a very tight, abbreviated, and sinuous track that will require a lot out of the racers and their motorcycles. Have you seen designs and schematics of the track yet?
I like to look at the tracks and I like to get a general look at it. That being said, and like you said, the New Jersey track looks busy. There are a lot of lanes on this track and it looks like it will be a little more technical. Yeah, I do like to study the track maps they provide us before we show up at each stadium. A lot of times, if we see a section of a track that looks kind of goofy or funky, we’ll apply that the week before while were practicing and testing. And as far as the New Jersey race itself, I’ve had good runs there and bad runs there. It’s a place I have mixed emotions for me. Right now, though, I’m coming off a run with two race wins and have a lot of steam left in me and it should be good.

With only two main events left in the season, can you still win this thing?
Absolutely. I’ll try and get some more points out of Cooper Webb this weekend and hopefully I’ll cut the point’s gap down to a reasonable margin for Las Vegas, where the pressure is really on.

Did you expect Webb to step up like he did in 2019?
Well, you never know. When you look at past results, you’d say no, but he turned a page and I guess he turned the right page. He’s been consistent and he’s won races and that’s where we’re lacking there during the middle of the series and that’s where he’s gone ahead of us.

All things considered thus far in ’19 with all the highs and lows, what’s your take on your supercross season?
Like you said, it’s kind of been all over the place. Gosh, it’s disappointing for me as a rider because I’ve been the guy with all these wins and I’ve not won the title. It’s not over yet, but it’s looking a little ways out of reach. If we don’t get it, once again, it’s like, “Man, we just have to try and work at it more and be better next year.” It’s always a building process, especially when you start out the season with a new chassis in a new bike. I also had some injuries last December and that also set me back. If you want to want to call that stuff excuses, you can, but that’s just the way it works and you have to have all your stuff together if you want to be the number one guy.

Yes, your current Kawasaki KX450 race bike basically came off a clean sheet of paper for ‘19, didn’t it?
Yeah, and the bike is outstanding in production form, but when you take things to our level on a supercross track, things are always a little bit different. We were supper dialed-in for 2017 and 2018, but a lot of those things don’t exactly translate exactly over into a new chassis. I don’t think a lot of people understand that it takes a lot to get to the top at this level and to be winning races and we weren’t quite ready at the beginning of the season.

The Lucas Oil AMA Pro Motocross Championship will begin shortly and you’re the undisputed 450 Class champion. You ready to get rolling on the natural terrain circuits this summer?
I do. So far, testing has been good and I think a lot of things we’ve learned in the supercross season will translate to the motocross season. It should be good. I’m healthy now and from all the outdoor laps I’ve ridden so far, it should be something to look forward to.