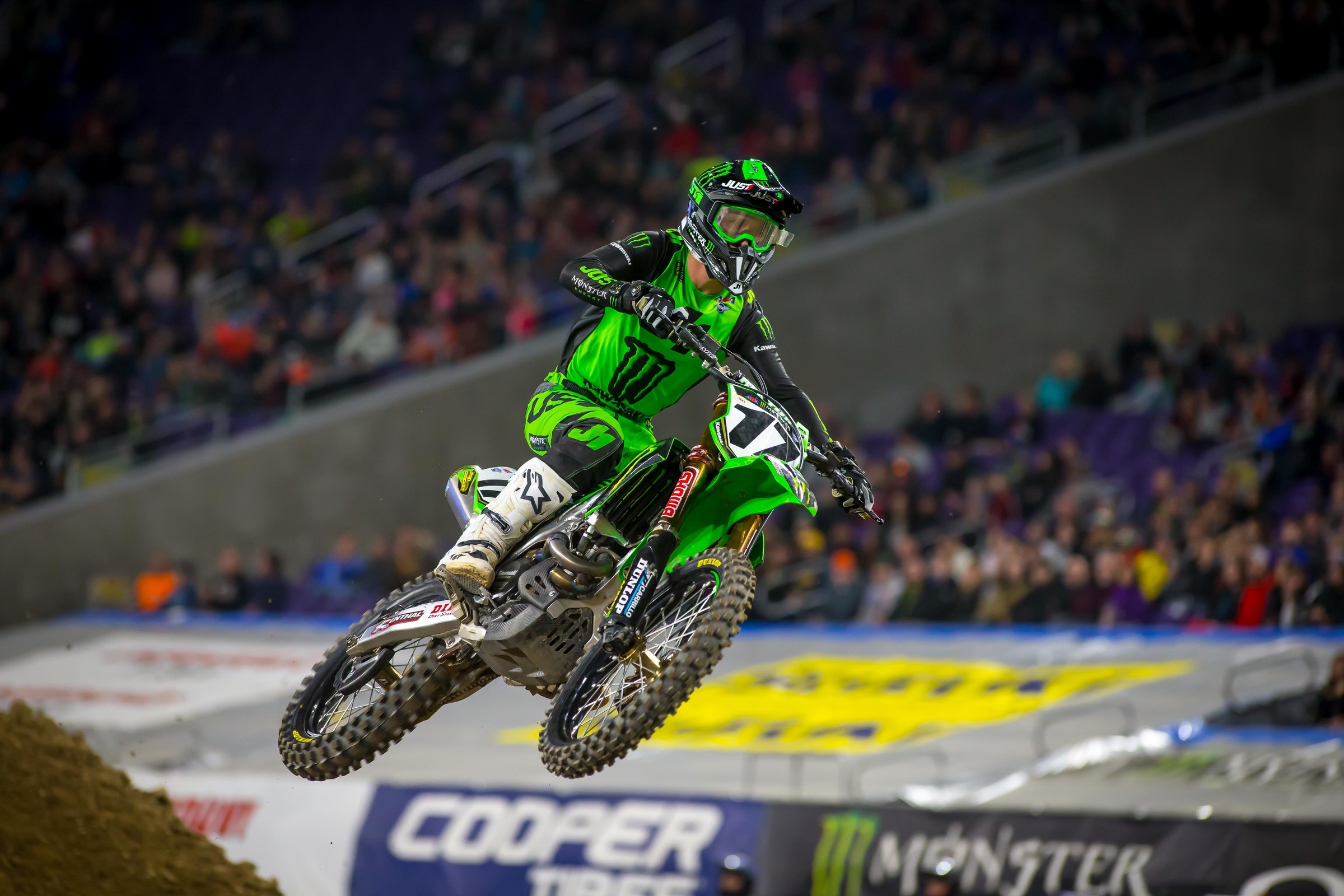 Monster Energy Kawasaki’s Joey Savatgy finished in fifth place at round seven of the Monster Energy AMA Supercross in Arlington last Saturday. The rookie earned his second top five finish in as many weeks, after leading 14 laps of the main event in Minneapolis and finishing in fourth place.

He spoke with Jason Weigandt after the race.

Racer X: You’re riding really well. You have to be pretty happy with the way this is going.
Joey Savatgy: Yeah. It’s hard to be too upset. It’s like 50/50 for me because I’ve been riding really well and putting myself in good spots, but at the same time there’s still those little mistakes. Last weekend especially I think had I fixed one thing and maybe fixed two things tops, I think we could have had a really good opportunity to be on the box, which would have been awesome. Then tonight, I think we were fourth on the first lap. It’s gnarly. There’s a lot of dudes. You make one little mistake and then someone comes up the inside and next thing you know you got like three guys just buzzing in your ear. I think I lost two spots on one lap. So it’s tough, but at the same time my goal coming in was to get better as the season goes on and to learn and to kind of enjoy it. It’s been a tough two years for me.

You used to win races and didn’t even necessarily seem happy then. So are you trying to balance this a little bit?
Yeah, I’m trying to enjoy it. I think that’s one thing that I’ve learned in the last probably year, two years, is take what you got and be happy and be thankful for everything that goes on. If all we had tonight was fifth, be happy with it. If all we have next weekend is ninth, learn. Why were [we] only ninth, and how could we have been better?

But for a lot of the race you probably could still see them. You weren’t that far back.
I wasn’t. I could [see them]. Like I said, I made a little bit of a mistake and then maybe Marvin [Musquin] got me, and then Cooper [Webb] threw it in there right away. Then we had to roll the double and that allowed Blake [Baggett] to kind of get up on the backside of me. With everybody being so close, the top 14 I think were all within the same second, it leads to tough racing because number one the lap times are a little shorter so we’re doing a lot of laps. Number two, it’s gnarly. For me, it hasn’t set in yet because we’re only seven [rounds] in, so there’s still 10 more to go. I think when we get to 11, 12 is really where I’ll, not feel it, but where it will set in. This is a long season. But I’m there for a lot of it. Lap times consistently have been there the last couple weekends. We’ve had moments of I don’t want to say brilliance, but we’ve had moments of the limelight and we’ve been making progress with myself and the bike. So there’s not a lot more to ask. It’s two [top fives] back-to-back. I got some good starts and got some more time up front.

Talk to me a little bit about what we talked about this morning—how much different the track changes are compared to what you experienced in 250SX?
That’s the biggest thing. I’ve been talking with the team. It’s hard to explain it to somebody, but I used to think the 250 track was kind of gnarly. Obviously because that’s what you’re used to, but it’s a whole other deal when you get to this class. A lot of this respect to the dudes up front. At the end of the day, I think that’s the biggest thing between that [250] class and here. There’s a lot more race etiquette, for the most part, and there’s a lot of mutual respect. So you don’t have to worry about getting your clock cleaned, for the most part. Ken [Roczen] and I could be battling and he can run it in there, and I know he’s going to run it in there, but he’s not going to just destroy me. That’s nice because it just shows that mutual respect. The track from [lap] five, seven, eight on is gnarly. We start the race and it’s like, “This is awesome! They fixed everything.” They just painted the surface. Two, three laps in, that surface is gone and we’re basically where the end of the main was for the 250 guys, and that’s there for three or four laps and pretty soon it’s gnarly.

You have to learn—these other guys with more experience probably know what to do when that happens and when to switch?
That’s where last weekend, where Blake crashed, Marvin wasn’t wheeling up anymore. He was doubling over. Had I started doing that when Cooper was behind me, I really believe that it would have been very hard for him to pass me. The energy that you would have saved just by railing the corner, not having to worry about setting it up, getting up onto that thing, come out, double over, and then you do three and then single out or whatever it was, you save that little bit of energy where you can then use it elsewhere. Not only that, but then the flow. Obviously with the corner being tighter and tighter and choppier, it’s not a good flow. That’s where Marvin’s creativity is really good and I can learn from it. But for sure, I think if I had changed that, I truly believe we would have gotten on the box. Learning how long we can run that main line before we have to switch it is still something that I’m learning. It’s tough because I think in the past in the [250] class, that’s hurt me. I’ve been very one-lined and stuck to maybe the one that was working earlier in the day but doesn’t [work anymore]. So it’s tough because where Cooper got me last weekend, I changed the lines. He thought he had spooked me, but I thought he was catching me in that lane so I was like, I’ll change lines. I’m trying to get out of the habit of staying in the line that’s not good. As it turned out, he was taking the same line I was. It was just me overthinking. I could see his shadow off the triple and I’m like, “Dude, he’s catching me!” For me, I’m just trying to get out of the habit of staying in that line and opening my eyes, and the race craft. Just trying to learn and figure it out as I go.

It was a strong rookie class. You, far away, have been the best. Justin Hill’s had his struggles. Zach Osborne didn’t even start until now. You’ve beaten Aaron Plessinger most of the races. Do you look at that at all? Do you think of that at all?
No. Obviously there’s not the greatest blood between [Zach] Osborne and I. I think not necessarily the media but I think so many people hype that up out of context and people act like I wouldn’t have done the same thing he did.

You never talk trash about it.
No because at the end of the day, trust me, I wouldn’t have hesitated to do the same thing he did. So on that side of it, it’s whatever, man. I’ve learned to move on past that. That’s so far behind me. It’s a lesson. Unfortunately it’s a painful and a hurtful lesson, but what are you not going to do that for the title? You’re out of your mind if you don’t. From that side of it, I had hard feelings on the situation. What he did, was it gnarly? Yeah, it was aggressive, but it wasn’t for a heat race win. It wasn’t for a main event. It was for the title. So of course I would have done the same thing. So obviously when he makes that debut and there’s a lot of hype on it, there’s a little part of me that’s like, I want to do better than the rest of these guys, but for the most part I don’t think about it. I worry about me. My main goal is to at least one practice try to be up on the board, try to get the day started off on the right foot and have a good heat race, which I’ve been struggling in. The heat races haven’t been my thing this year, but just learning.

You won one, didn’t you?
Yeah, Oakland. I still struggled a lot more in the heat race than anything else just because the track was so slippery. I just don’t have that comfort yet on the loose soil.