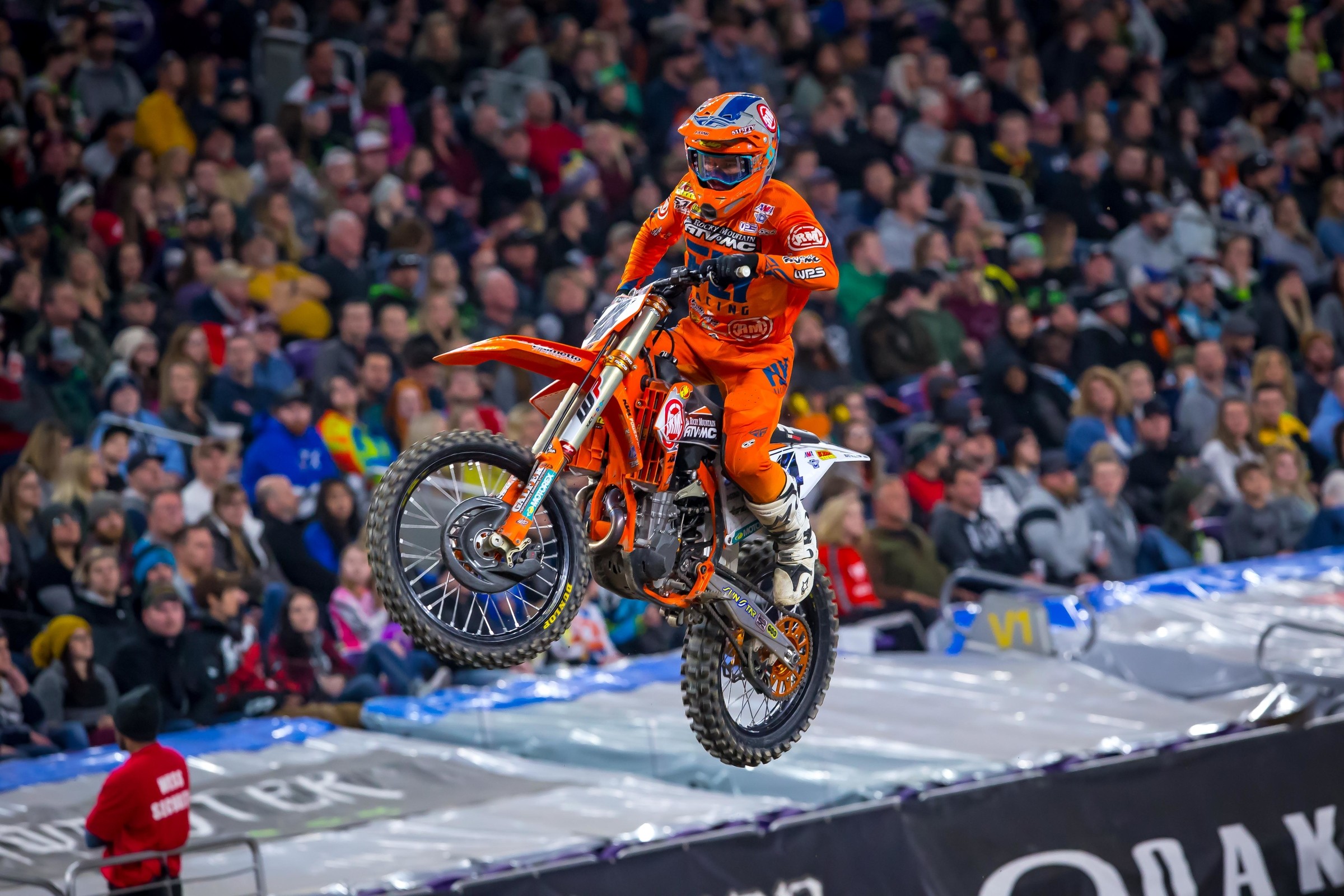 Jordon Smith’s crew had to do a last second wheel change just before the gate dropped in the 250SX main event. How nerve wracking do you think that was?

Well, it’s never fun to have last minute issues. This particular scenario isn’t all that bad because Jordon would know once the wheel is on and tight, he should be fine. The situations I would be leery about were engine/electrical bugs that the team would be sorting out at the last second. In that moment, you really aren’t sure if everything is fixed or if the engine could misfire still, etc. It’s a very scary first lap but there’s no option but to assume it will work correctly. In this case, once the wheel was changed, Jordon would be confident. The only challenge would be to maintain his focus and poise. He had to jump on the bike and immediately focus on the gate drop instead of his normal routine. I think both he and the team did a fantastic job of avoiding panic and fixing the problem.

This will get your heart rate going. Excellent work here by @kortiz108 under pressure. @supercrosslive

In the main event, most riders opted for jumping through the whoops. Ken Roczen stayed with the blitz method. Why?

This is always a personal preference. Some riders just hate jumping through whoops. Chad Reed, Blake Baggett, and Eli Tomac are very rare jumpers. Marvin Musquin and Cooper Webb are on the other end of the spectrum in that they look for the first opportunity to jump. Both methods have their own strengths and weakness but I believe having the prowess to excel at both is the optimal skill set. Marvin Musquin suffers when blitzing is the only option. Chad Reed suffers a bit when jumping is the obvious line choice. These deficiencies are bred through thousands of laps of choosing one method and not practicing the other. When I was racing, I was much better at jumping whoops than Chad Reed was. He would only practice this a few times per season and it was incredible at how bad he actually was at it. It was because he NEVER chose to do it. He would always blitz the whoops and was one of the best we have ever seen at doing so. He was so good that he almost relied on it too much. When the whoops were beyond deteriorated and jumping was superior, he would continue to blitz because that’s what he knew.

For Kenny, this had to be the same choice. He surely tried to jump a few times and it must not have felt comfortable. Riders default to what comes naturally. Chad blitzes, Marvin jumps and, in this case, Kenny felt better blitzing.

We all know about the drama that the lime caused in San Diego. For Minneapolis, they purposely avoided using lime even though this would have been a certainty in the past. How did it affect the track?

Minneapolis was a weird surface because the base was hard packed. The jumps, however, were not. I am not sure if the dirt was brought in later for the jumps, but there was a stark contrast. The base dirt was almost dusty in some spots and we saw several riders crash from a lack of traction. The jumps were soft, tacky, and rutty, though. The jumps were ruttier than they would have been if lime was used but I personally didn’t feel it was anything out of the ordinary. East Coast tracks in the winter have ALWAYS been rutty and it adds to the flavor of the series. I have seen many tracks where lime was almost mandatory (Atlanta and Indy in the past) but Saturday was not one of them.

Eli Tomac was 16th on the first lap. What happened to him on the start?

Eli has been incredibly inconsistent off the line this year. I am not sure if it’s the new 2019 model that they are still sorting out or if it’s the back injury subconsciously creeping into his confidence or if it’s just his own error, but he is hurting his chance of success by starting in the back (he was pretty good out of the gate last year). The top few guys are all lumped into this title fight and starting 16th guarantees that they are going to check out before Eli can get going.

I watched the start a bunch of times in an effort to answer this but it’s simple: He gets a bad jump off the grid and gets squeezed coming down the start straight. He then tucks inside to try to salvage it but is too far back and can’t find a clear path to sneak forward. He is then destined to slowly follow the pack down the rhythm section and wait for everyone to shuffle through the first few turns. All of that difficulty is created in the first five feet from the gate, though.

Savatgy has been really good, lately. What gives?

Being 100 percent honest, he has been faster than I expected. His speed in timed qualifying and the first half of the main event demands respect. He is riding with confidence and looks like he belongs up there. He is suffering from the pace in the second half of the race but that will come in time if he continues to put himself up there. Ten great laps will turn into 12 and then 15, etc. If he can put himself in position to succeed like he did Saturday, good things will happen for the 17.

How did Baggett crash? Musquin mentioned a kicker on that jump.

That section required riders to wheelie over a small ledge, then accelerate off the next jump and double across a gap. This wasn’t all that difficult to do but as riders ramped up the intensity, they were rushing the technical aspect. Getting the front wheel raised cleanly and then setting down in the spot to accelerate was key. Most of these elite riders are so talented they can “cheat” a bit and not slow down to make sure this is picture perfect. This saves time and keeps them driving forward.

In Blake’s case, though, he doesn’t get into the flat part to drive forward. He bounces off the first ledge, compressing him into the next jump without the drive he needs to clear the gap. That compression sent him into a minor endo which normally would be manageable but this time he is also coming up short on the double. With his weight forward, the front end dropping fast, the one thing he couldn’t do was have his front tire hit the next jump face first. Unfortunately, that’s exactly what happened, and it immediately pitched him over the handlebars. He was extremely lucky to walk away from that one. All of that force driving a rider into a jump face usually ends up in an ambulance ride.

The track seemed hard to pass on. Why?

There were three things I noticed that attributed to difficulty in passing.

First, the track design was very easy. The rhythm sections were straight forward, and most riders jumped the main option within a few laps.

Second, there were several 90 degree turns that didn’t allow any sort of maneuvering. If a rider protects the inside in a 90, it’s virtually impossible to pass him.

The last key was the ruts in the corners. In a typical bowl berm, riders can cross the middle of the turn and execute a block pass. With ruts in the bowl berms, that block pass now turns into a full-on take out move because the lead rider is locked into his line. If the following rider comes barreling in to block, the lead rider has no way to change direction. He is locked into rut and can’t suddenly avoid the move. When Ken Roczen mentioned that he was waiting and couldn’t find a line past Savatgy, this was why. He could have cleaned him out but without doing just that, it was tough to make a block pass work.