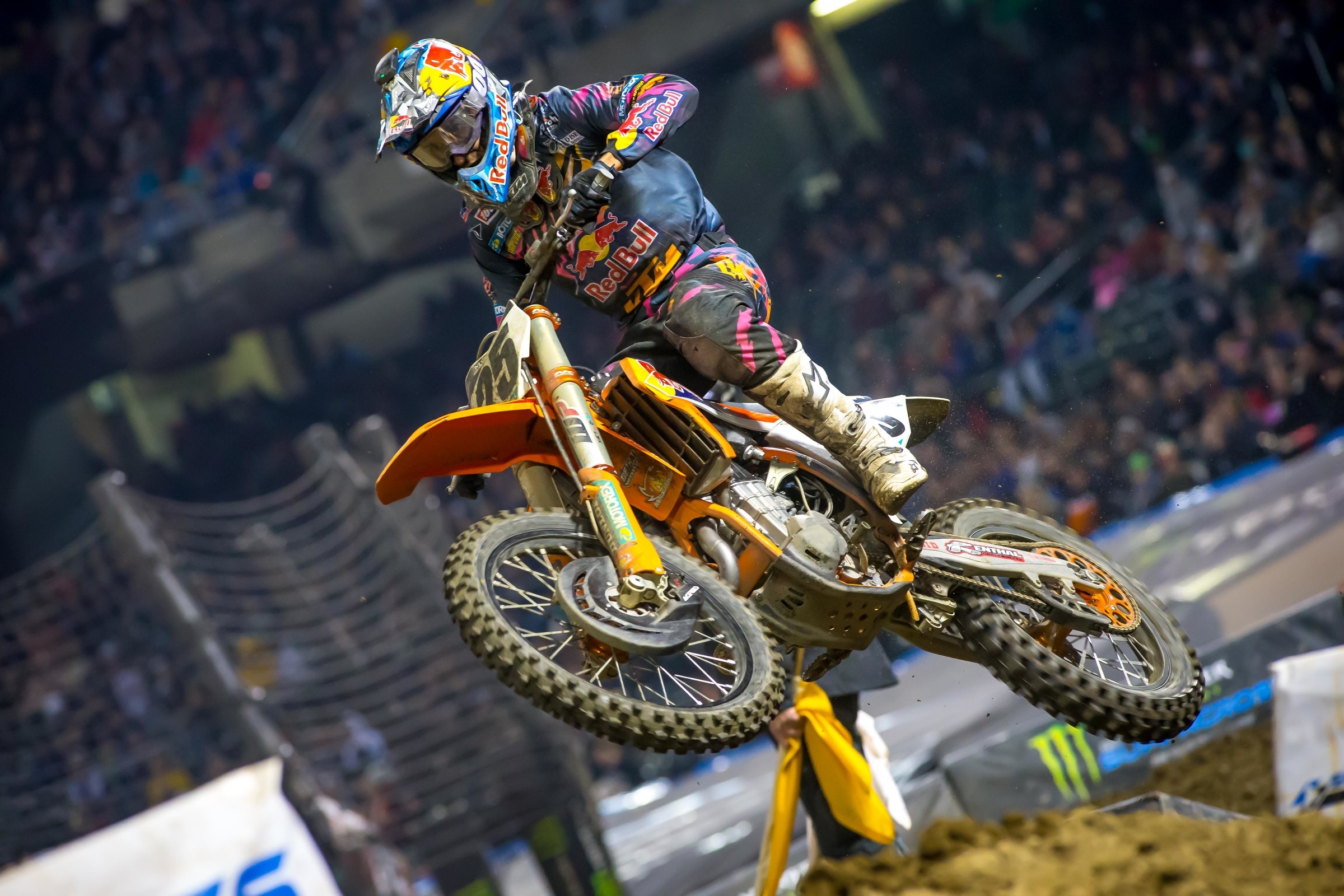 The red plated, which signifies the points lead, has been making the rounds quite a bit so far in 2019. Reigning champ Jason Anderson had it at A1, Justin Barcia had it in Glendale, Ken Roczen had it at A2 and Oakland, and Cooper Webb had it in San Diego. In Minneapolis it’ll be on Eli Tomac’s bike! The points are still tight up front though, with both Roczen and Marvin Musquin tied for second, just four points back of Tomac. Will we see the red plate change hands yet again this weekend? –Aaron Hansel

Things sure can change in a hurry in this sport. Just ask Barcia, who won the opener, crashed at A2, rode with a sore tailbone in Oakland, and experienced a mechanical problem in San Diego that knocked him out of the main event early. After leading the championship Barcia is now in seventh place and is thirty-two points back of the lead. If he’s going to get back in the championship fight Barcia needs to rebound and put in a strong ride in Minneapolis. –Hansel

If you’re keeping track of Blake Baggett’s results this season you’ve no doubt noticed an up and down trend. In the first five he’s gone 12-1-15-3-9. Not exactly what you want if you’re trying to maintain a healthy championship bid, but on the flipside he’s due for a podium in Minneapolis if this up and down trend continues. –Hansel

We’re five races into the 2019 season of Monster Energy AMA Supercross and so far Ken Roczen and Marvin Musquin have yet to get a win. They’ve both been close at times, and you know it’s only a matter of time before they take a trip to the winner’s circle. They’re both just too good not to. The only question is, when? Roczen says that, thanks to test rider Trey Canard, they found something with the bike that should help, and Musquin says his knee, which he hurt before the season, is no longer a hindrance during the week or on race day. In other words, it shouldn’t be long before either of these two break through. -Hansel

Once Eli Tomac gets hot it’s not unusual for him to stay that way for extended periods of time. And considering he took his first win of the season and the points lead in one fell swoop last week in San Diego, the competition might just want to be checking the forecast for signs a possible looming heatwave. We’ve seen it before, and you know we’ll see it again at some point. Was last week the start of a reign of green terror? -Hansel

The East Region Is Here

This weekend will mark the first round of the 250SX East Region and most of the “experts” have the Monster Energy/Pro Circuit Kawasaki duo of Austin Forkner and Martin Davalos as early title favorites, alongside Troy Lee Designs/Red Bull KTM’s Jordon Smith and GEICO Honda’s Chase Sexton. Davalos told us earlier this week he didn’t even look at the entry list, and that he is focused on himself. “I know there are going to be fast people and that there are going to be rounds where there are going to be faster people than me. Like I said, everybody is great. A lot of the manufacturers are stepping up and developing their bikes and all the bikes are getting closer together and they all work well and everybody is training hard. I think it’s more of a mental game now once you get to the race and approach the weekend.” (You can read the full interview on Racer X Online tomorrow.) In a short season every round holds value. Who will start the East Region with a win tomorrow? -Chase Stallo

We only saw Justin Cooper for one round in his rookie supercross season before he crashed at round two and missed the rest of the season. If you’re looking for a sleeper to challenge the names listed above, it could be Cooper, who shined in Lucas Oil AMA Pro Motocross last year. Can he put his name in the mix early in 2019? -Stallo

How Healthy Is Craig?

GEICO Honda has been bitten by the injury bug this year. Jeremy Martin is out for the year, Hunter Lawrence is out for the foreseeable future, Chase Sexton broke his collarbone in December, and Christian Craig just returned to riding this week after sustaining a Bennett fracture (a common fracture of the thumb) in December. Craig has had little time to prepare for the start of the East Region, but he will attempt to race this weekend. -Stallo

TC Back In America

Thomas Covington has spent his entire pro career chasing a world championship in the FIM Motocross World Championship in Europe, but this off-season he signed with Rockstar Energy Husqvarna to move to America in 2019. The Alabama native will make his U.S. and supercross debut this weekend. Word from the test tracks is Covington has adjusted quickly to supercross and has been riding well. We all know “flying at the test track” doesn’t mean much until the actual racing begins, but we will get a glimpse at TC this weekend. -Stallo

After spending last year with Troy Lee Designs/Red Bull KTM, Alex Martin moved over to JGR/Yoshimura Suzuki this off-season on a two-year deal. Some people are very high on A-Mart this year—Steve Matthes is currently leading the charge—but we’ve yet to see how A-Mart has adjusted to the new Suzuki. We’ll find out this weekend how the transition is going. -Stallo