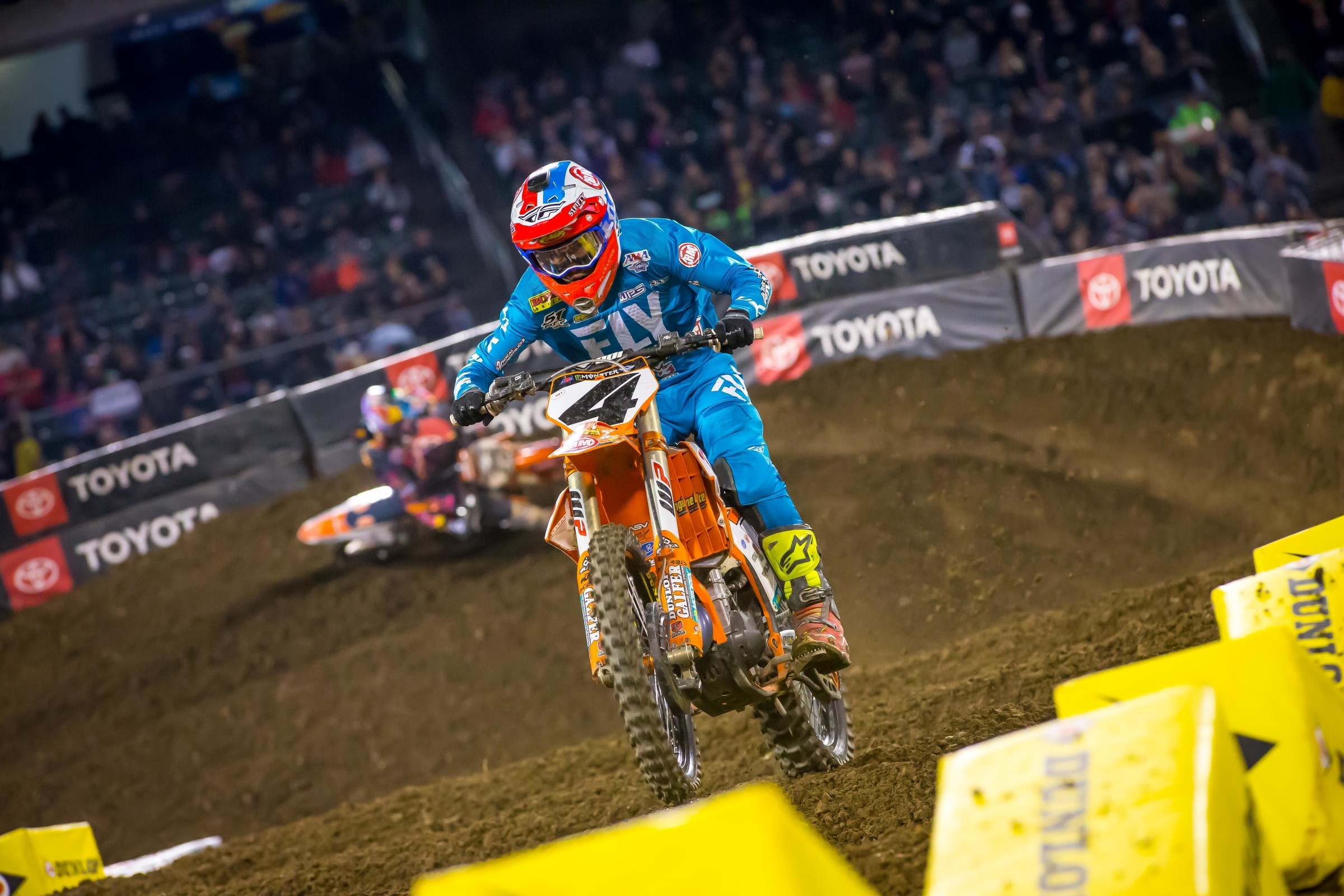 Describe what made these whoops so tough

Whoops are always tough, but the level of difficulty ratchets up under a few scenarios, most of which we saw Saturday night. Softer dirt means the whoops will deteriorate and create uneven edges. That causes the rear tire to want to hop side to side as the angles dictate. Further, the heights varied from whoop to whoop making it difficult to find a level plane to blitz across. Ideally, a rider can hop up onto and stay perfectly level across the whoops with very little movement. The Oakland dirt made that extremely difficult to maintain.

Is a rider's heart rate taxed even higher with back-to-back whoop sections?

If riders are blitzing the whoops, yes, back-to-back whoops are very taxing on heart rate and breathing. With Oakland forcing many riders to jump through, however, that effect is lessened. Most riders hold their breath when blitzing whoops and subsequently have to catch up on their breathing when finished with each section. That causes a sharp heart rate spike. When riders are able to rhythm or jump through the whoops, they usually don’t have to hold their breath, so they avoid that whole dynamic.

Blake Baggett was sending in through the whoops even when they were gnarly. Is he insane?

Blake found a line on the very left that he felt comfortable with. It was a bit slower in the previous corner as he had to turn all the way back down, but his entry speed easily made up for that. He was lifting his front wheel so that it totally missed a whoop or two, carrying his momentum so much that he really didn't need to accelerate until he was halfway through. It's a pretty basic concept but when the whoops are in such disarray, most won't have the confidence to pull the trigger. Blake has been very underappreciated in the whoops for a year or two, this was just a perfect chance to spotlight it.

How scared were you for Adam Cianciarulo's safety when he was leading, making mistakes, but trying to hold on under pressure?

I have to give Adam a lot of credit because I didn't think he was going to hold on to that. He was under such heavy pressure and looked ready to make a critical mistake. Colt Nichols looked like a cat in the pounce position, showing Adam a wheel at every opportunity. Unfortunately, we have seen Adam fold in that spot too many times and I fully expected to see it again. To his credit, though, Adam withstood the barrage, which forced Nichols to regroup, and then Adam ultimately pulled away from him. He showed tremendous poise when most expected the opposite.

Any sense of alarm at all for Tomac or Roczen?

I don't really have any sense of alarm for either, but I would say my concern is higher for Tomac. Roczen is right in the mix and is just chugging along. He is better than last season and was fast all day. I believe he is taking a long-game approach and content to make smart decisions. I don't see him taking big chances or putting himself in high risk situations, all of which pay dividends in a 17-round series.

While much of that could be said for Eli, my concern is that I haven't seen his normal intensity or next level speed. That's been his strength in recent years and also what propelled him to 18 wins in two seasons. It could also be said it is what cost him championships as well, but it's just strange to not see him turn it up when it's desperately needed. Even if he was intentionally playing it cool, a la Roczen's approach, I don't think he would be able to consciously watch riders pull away from him weekly without a response. I can't remember many instances where someone just passed and dropped Tomac in recent years. That's concerning.

Is this Cooper Webb's world and we're just living in it?

I’m not ready to go that far but I will say that it's great to have him back. Keep in mind that Marv caught him, crashed, and caught him again but regardless, Webb won and deserved to win. It's still way too early to know how this season will go but Webb is certainly putting himself squarely into championship contention. I think the key to Webb's success will be whether or not he can continue to start up front. He has the confidence now so if he starts near the front, look out. Marv is finding his groove, and he will only get stronger from here on out, so I think Cooper will need to stay up there early in the races to maintain these results. Roczen is steady Eddie thus far and who knows when Tomac will shake off the funk he's in. Webb may have the red plate and all of the momentum, but I have a feeling this is far from over.