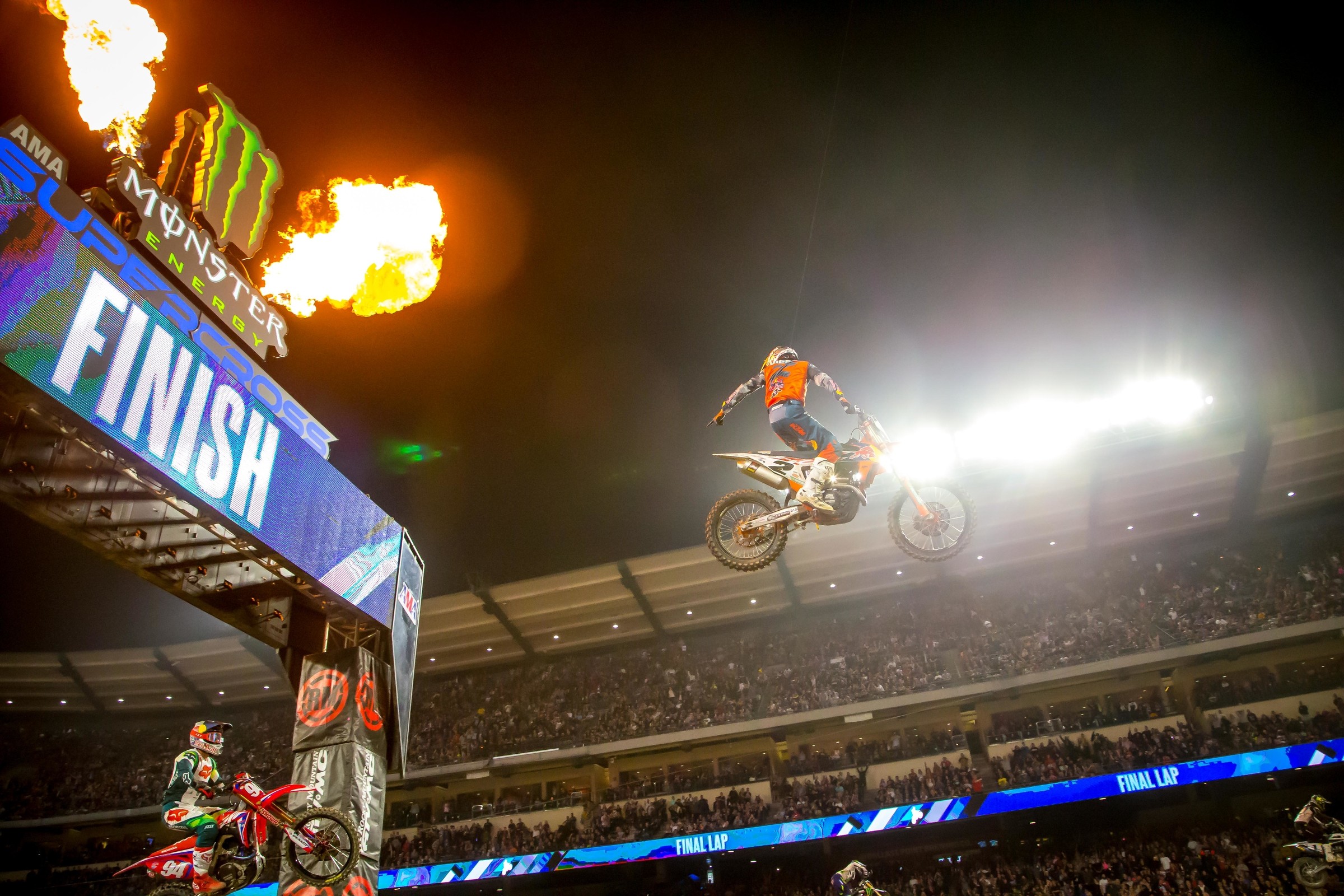 In his 250 days, Cooper Webb was known as a fiery, brash, and dominant competitor. Not only did he stand a very good chance of winning every time he got on the bike, he’d get physical on the track, and have words after, with anyone who did something he didn't like. We haven’t really seen that from Webb since he joined the premier class in 2017, but we got a little taste of it last week when Webb won his first 450SX race. He even showcased some of his classic attitude by looking back at Ken Roczen and giving him the finger-gun move as he sailed over the finish line in front of him. We’ll see which Webb shows up in Oakland. –Aaron Hansel

On the Right Track

With three rounds down it might seem a little weird that Eli Tomac, the man who won more races in the last two seasons than anyone, hasn’t notched a win yet. But a closer look at past performances reveals that Tomac is actually having the strongest 450SX start of his career. At this point last year, he was in thirteenth and forty-three points out of the lead. In 2017, he was fifth and twenty-five points back, in 2016 he was fifth and eighteen points back, in 2015 he was fourth and twenty-six points back, and in 2014 a shoulder injury kept him out of main events until the fifth round. With that in mind, second in the standings and only two points back of Ken Roczen seems pretty good! If things go his way in Oakland he could even leave with the red plate, even if he doesn’t win. –Hansel

Speaking of things that seem odd at first glance, our 450SX points leader, Roczen, hasn’t won a race yet either. In fact, he hasn’t won a race since he topped the field in San Diego in 2017, thanks to a pair of serious injuries. Don’t expect this streak to continue though. Roczen is too good not to win sooner or later, he’s already been close this season, and that finger-gun move from Webb last week probably didn’t do anything to soften Roczen’s resolve to win. We’ll see if it happens in Oakland. -Hansel

Before Anaheim 1 it would have sounded silly to wonder if we might see three first-time winners in the first four rounds, but let’s face it, the start to this season has been wild! Justin Barcia kicked it all off by winning for the first time since 2013, and since then we’ve seen a pair of first-time winners in Blake Baggett and Webb. If this trend continues could someone like Aaron Plessinger, Justin Hill, Dean Wilson, or Joey Savatgy step up to claim their first 450SX win this weekend? –Hansel

You’d never know it by Dylan Ferrandis’ TV interview from Anaheim 2, in which he criticized his riding and said he didn’t deserve to win, but the Frenchman has been very fast this season. He’s been quick in practice, has been fast in the mains, and has finished second in two of three races. So far, the only real blemish to his season is when he crashed all by himself in Glendale. He’s going to win one of these things sooner or later, and it could be in Oakland. -Hansel

Round four is usually when we start to see the top pack separate themselves in the championship hunt—will we see that this weekend? Anderson is out of the hunt now because of his injury. Ken Roczen is itching for a win, Eli Tomac is coming off of a win in the last leg of the Triple Crown at Anaheim 2, and Marvin Musquin was solid for the first time all season at A2, getting second overall. As wild and crazy as this season has been, it’s not impossible to imagine the old favorites like Tomac, Musquin, and Roczen pulling away from the others in points this weekend. –Mitch Kendra

Reports are that Justin Barcia will race this weekend. He currently sits in fifth overall in the points standings—only seven points out of first place—but this weekend will be huge for him. Barcia was injured in the third main event at A2 but his 7-3-22 was good enough for 10th overall. The Triple Crown saved his night, because his DNF in the main event would have been more costly in the standings under the normal format. Now, the question is how much will this injury affect him on Saturday? He could come out and struggle badly, he could come be back to his usual speed, or he could come back and just play it safe with a 10th place finish. For Barcia, it’s all about salvaging points. No one knows how that is going to go. –Kendra

Will a Rookie Step Up?

Aaron Plessinger sits in the highest spot of the rookies (ninth) in the 450SX through three rounds (Justin Hill 14th, Joey Savatgy 15th—and Zach Osborne is still recovering from a pre-season injury). Plessinger also has the highest finish in a main event through three rounds, after getting sixth at A1 and sixth in the final Triple Crown race at A2 (Hill had a ninth in the final Triple Crown race at A2 and Savatgy had two eighth place finishes in the Triple Crown at A2). Hill has qualified fast—fastest at Glendale— but hasn’t seen the main event results yet. Savatgy suffered a concussion in his heat race at Glendale but was solid at A2. We knew the 450SX would be strong coming into this season and these four would only make it that much stronger. It’s tough to say which of the rookies is the best so far, but Plessinger will more than likely move up in points standings this weekend with Anderson out and Barcia banged up. – Kendra

Which AC Comes to Oakland?

Adam Cianciarulo said he was a “different guy” this year, one who would be more solid and make fewer mistakes, but we’ve merely gotten a glimpse of that, as we’ve seen more of the old AC this year. But the new AC needs to show up this weekend to Oakland, and the remaining weekends throughout the season if Adam wants to finally get the championship chip off of his shoulder. At Glendale, he holeshot and took off. At A2, he holeshot, but then crashed, setting off a tough night. Which AC will we get on Saturday? – Kendra

Colt Nichols has been rock solid so far this year in 250SX West, winning the Anaheim opener and grabbing podiums at the next two races to maintain the red plate. However, Shane McElrath is hitting his stride. He won Anaheim 2, and told the NBCSN TV crew that he wasn’t happy with his third-place rides to start the year, but he found a bike setup he likes for Anaheim 2, and it showed. Is momentum shifting? A lot will depend on Nichols, who is new to this whole championship-battle stuff. If he rides in Oakland like he did at A1, it will do much to slow to riders around him in the standings. – Jason Weigandt