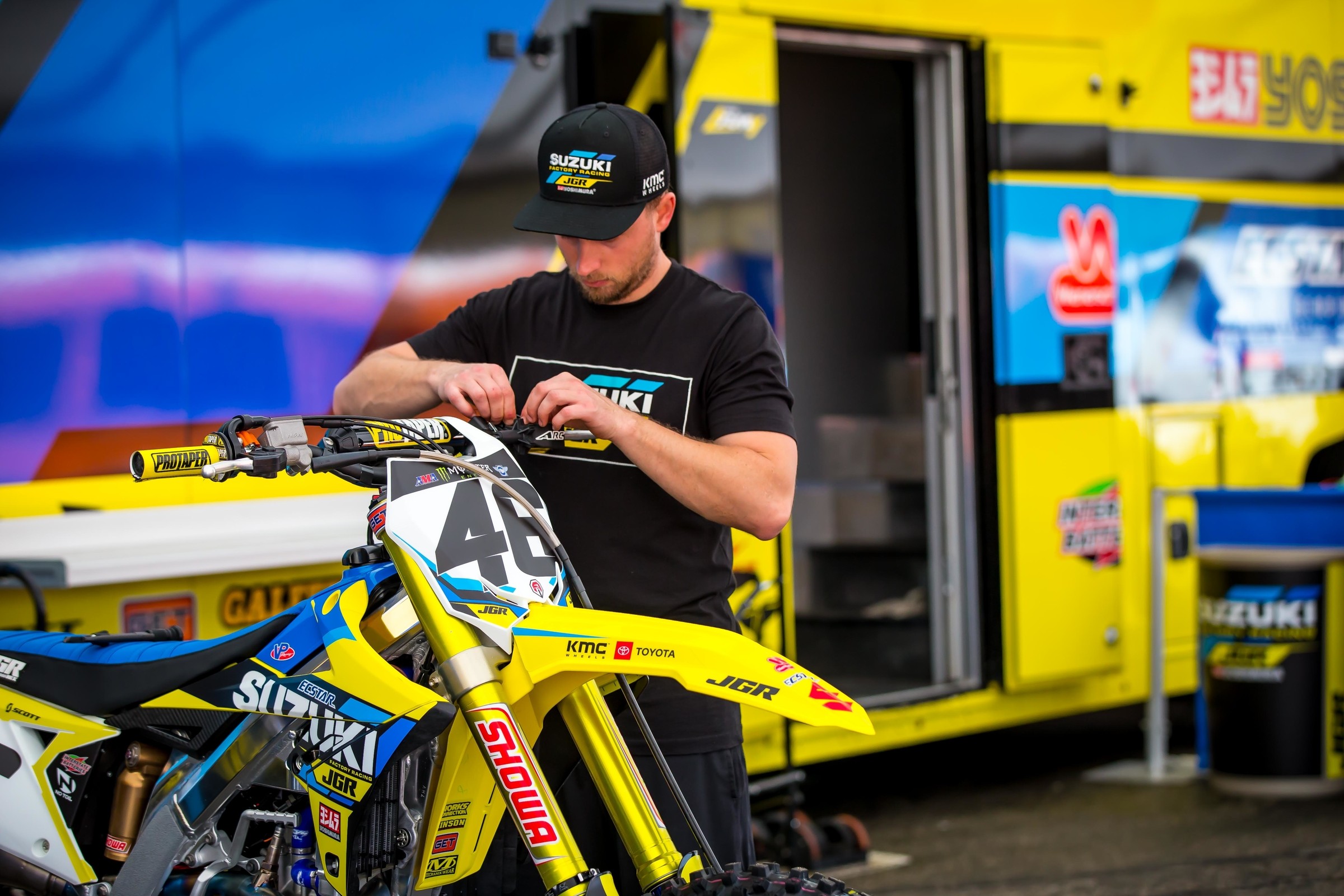 “Yeah, 20 years of professional motocross and supercross racing and I’m still at it and I have Coy Gibbs and the JGR/Yoshimura Suzuki Factory Racing team to thank for that,” said Chad Reed at the opening round press conference for Monster AMA Energy Supercross.

Coy Gibbs is the owner of one of several privately-owned teams bringing semi-trucks to the pits and providing jobs for quality racers. Many of these teams and owners come and go, but some have found success—just last weekend in Glendale, Arizona, Rocky Mountain ATV/MC-KTM-WPS won the 450SX main event. The team is owned by Forrest Butler, and started as team Butler Brothers MX.

Coy’s team, which now operates as Suzuki’s primary factory effort, keeps on trucking, even after losing a title sponsor in the off-season, and then losing veteran team member Weston Peick to some scary injuries. Teams have to take some big hits in this sport, but Coy’s squad keeps swinging.

We caught up to Coy in the pits at Anaheim 2.

Racer X: Coy, first off, I want to say that all of us at Racer X are sorry to hear of the passing of your brother J.D. He was a friend of racing through and through. Are all you guys hanging in there okay?
Coy Gibbs: Yeah. I think it was just a long process. People digest things differently. I appreciate you asking.

The Daytona 500 is creeping up and I know you’re now heavily involved in the JGR NASCAR program. Will you be at most of the supercross events this year?
I went to Anaheim and I went to Phoenix. I’ll hit this one [Anaheim 2] and then I’ll miss next weekend. It’ll be hard to get to another one with all the car stuff, but I’ll try.

Some fans out there may be real interested in what you do in NASCAR. Can you give us a snapshot of that part of your working life?
I kind of work on the technical side—engineering, crew chiefs, human resources, accounting—and I don’t do a lot on the sponsorship side and with marketing. That’s a whole different side.

We’re here at round three of the 2019 Monster Energy AMA Supercross. As far as the Joe Gibbs Racing supercross effort thus far, what’s your take?
We haven’t quite got it done yet, but I was excited last week. Here’s the thing: You got to A1 and it rains and that makes it a whole different ballgame. I was worried it was going to rain here today too, but fortunately, the weather is really good. Phoenix is always a weird one. It starts a little weird, but Justin Hill set fast time down there and did well. Reedy [Chad Reed] looked good. If you get good starts, you’ll have a good main. Our two little ones too… [Jimmy] Decotis has been running good and Enzo [Lopes], I swear, when a rider is young like he is, they might pop something and I think that carries on. That’s what I’m hoping for.

All things considered a reasonable beginning to the race season?
Yeah, it’s not the greatest start, but hopefully we’ll build on it.

How do you like housing and running Chad Reed?
He’s good. I’ve always liked Chad. I didn’t know him very well, but my third kid loves Chad Reed. I bought him a football helmet one time and I said to him, “Dude, I’m going to trade this football helmet for a Chad Reed jersey.” And Chad gave me a jersey and a helmet and a whole bunch of stuff for my kid. Like I said, I hadn’t talked to him a ton, but that was cool to hook me up. We’ve talked over the years and I’ve gotten to know him, and I like him.

If you would, could you talk about how Chad ultimately ended up over here on your team?
Chad was looking for something and we’re always open to anything. He’d been riding for us a little bit, like at the Monster [Energy] Cup. Obviously, money these days is really hard to come by, so that was only thing we were struggling with. Unfortunately, Weston got injured over in France, so Chad kind of plugged right in there. That’s how that whole deal went down. It just kind of naturally happened and we were fortunate that he was there when Weston was down. And I think Chad was probably pumped to have somewhere to go ride. Chad actually moved up to North Carolina and lived in my parents’ neighborhood. He goes and practices and rides and helps everybody out. He’s got a ton of knowledge and he’s just a veteran guy and it’s good for him to be around the young guys, for sure.

It’s early on, but what’s your read on Justin Hill? He’s been with your organization for a bit of time now.
Good. He’s great. I love Justin. He has a great personality. He’s a great guy. We’re both into cars and he’s always building something. I think he’s extremely talented. It’s fun to watch them when they’re young and to watch them just mature. Once Justin gets there, I think it’ll be lights out.

Does your dad still keep a close eye on the JGR supercross effort?
Yeah, yeah. He calls me all the time when I’m out here at the races.

Does he like the sport?
Oh yeah. On Saturday night, no matter where he is at or how late it is, he always has the supercross race on.

Okay, another reason I wanted to speak with you is that I know you guys have recently lost some sponsorship money. It’s not cheap to do this. How is the sponsorship and funding side of things for you and the team right now?
With motorsports, and I’m seeing this across the board, for some reason something seems to be off. It seems like a lot of people are pulling back, or they’re shifting their focus on what they want to do with their money.

Are you guys shopping for new sponsors right now?
Yeah, we are. It’s just difficult right now. It’s just a matter of figuring out what the model will be moving into the future and can we survive? We’re not a factory. We’re factory-assisted, but there is not a continuous amount of money. Some of these factories seem like they have it.

In 2019, who are your base sponsors?
Well, obviously Suzuki. They are the greatest guys. From the top to the bottom there, they are so helpful. They love racing and support us 100 percent, it’s been amazing. We have KMC and Wienerschnitzel. Toyota is still helping us a little bit and still hanging in there. Really, though, a title sponsor is what we’re really looking for. That’s been our goal for the last six months. We’ve been working really hard on it. We had a list of 20 and we’re now down to about four. It’s starting to get a little scary, but we’re working as hard as we can.

Well, we need you guys here. You guys have brought a lot to the sport. Nobody is going to deny that.
I don’t know… To be honest, my concern is when the price point gets so high and you’re not bringing in enough money. Then the factories may not want to spend the money they’re spending and then you’ve got a major problem. I’d like to see something happen prior to that whether I’m here or not, just so the sport is healthy.