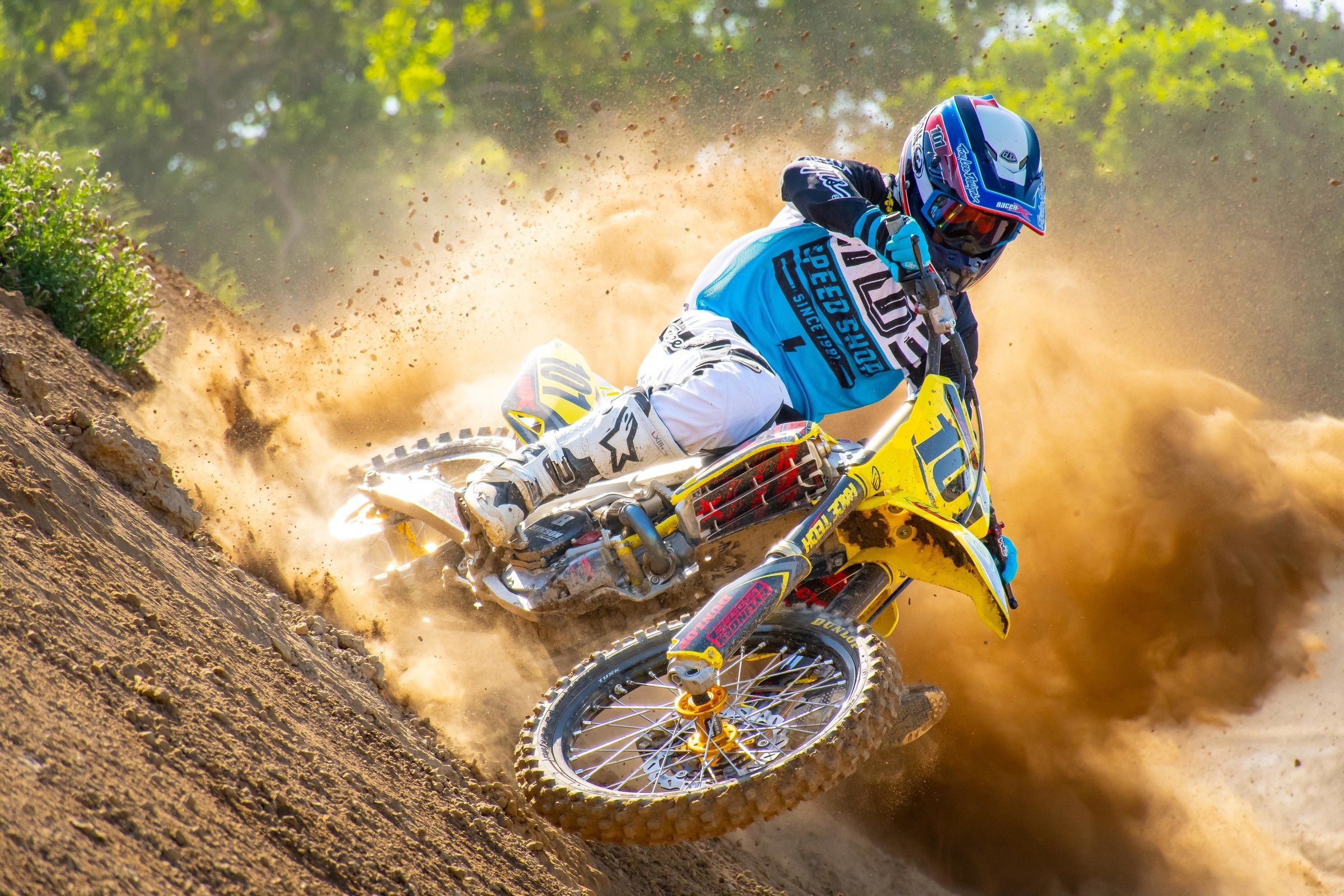 Got a few questions about the works-edition and factory-edition bike schemes that are out there. I have listened to a podcast in which you, Keefer, and Matthes talked about the latest renditions from dirt bike heaven. You made a good explanation about what separates the Honda sales pitch from the KTM effort to get around homologation time lines quicker and get the fruits of their continuous R&D efforts on the track, pronto.

Question #1: Can you agree that Kawasaki pretty much rained on their competitors’ parade by rolling out a brand-new chassis with an A-Kit fork in it and adding a bunch of other goodies, not to mention a great effort altogether, and just offering it nonchalantly as a 2019 model? Or will the Kawi return in a more regal cloak next year as the Kawasaki WR “works rendition?”

In that same podcast, you also spoke about how subtle changes in things like the flex of a swingarm or even just the rigidity of the engine mounts or mounting angle of the engine can have a huge impact on handling characteristics of a bike.

Question #2. How come we don’t see updated engine mounts in the aftermarket parts catalogue all over the place? Heck, I bet there are plenty of people who would fork over $500-600 schmuckerillos for a swingarm. So I guess my real question is, when can we, who own bikes older than last summer, also join the factory circus? Do you think that aftermarket manufacturers will come out with more stuff like that, actually sensible bolt-on stuff that works besides adding bling-factor to our steeds?

Thanks for your time!

Thanks for listening, my man. I don’t know that Kawasaki rained on their parade, but they definitely answered the bell when it looked like KTM/Husky were about to throw the coup de grace to every Japanese manufacturer in terms of performance. The KX450 might as well be a “Works Rendition,” as far as I’m concerned. Look, I don’t care for the marketing ploy of bolting on a few parts and calling it a “Works Edition.” I can buy the parts I want and bolt them on for the extra two-grand that costs me. KTM’s Factory Edition theme gets you updates that the current model year doesn’t have. Some years those were significant improvements, and other times they were subtle. Personally, I’d rather have a bike hit the mark right out of the crate; then I can decide where to throw extra money at it if I choose to do so. Still, marketing works, so I won’t be too surprised if all the manufacturers are eventually offering a dolled-up model for some extra cash.

In regard to your second question, there are some of those parts available, but they are rare. Dubach Racing offered some for the Yamaha at one point, and those parts became standard on the following year’s model. I think the perception is that those little engine hangers couldn’t possibly make much difference, so people won’t buy them. If they won’t sell, companies aren’t going to waste their time making them. Another issue is that by the time teams do the R&D to figure out what works, the manufacturers catch on and make those changes wholesale the following year, so there isn’t a big enough window to design, produce, and sell the parts before they’re obsolete.

I can remember when good racers had fun racing. They rode only at weekends because, well, there wasn't any "full-time, give up school and your childhood” training facilities. Okay, I'm not sure the past is always better because some dads threw a few spanners at their kids in anger and frustration that they dared finish second while hoping this improved the chances of raising a future world champion. So maybe the desire of some isn't any different in the modern fangled world, just the means of creating that commodity?

There's a few ways to look at the modern model used by millennial dream-chasers: One is the parent is doing everything in their power to empower the child's opportunities for achieving their dream life. Or, the parent is risking every present opportunity of unconditional family and human development time for the slimmest chance their child is a future commodity in the magical ill-perceived life the parent wants.

As an ex pro, what's your take on this evolutionary modern elite performance meat-grinder scrap heap? Is it worth skipping school and family time? Most sports assist a child through eventual scholarships into university. Modern moto seems to drag a child away from education. How do other sports balance both worlds while moto dreamers can't?

From the illiterate scrap heap

I think we all knew that one dad who was an absolute lunatic. A couple of the kids I grew up racing with had some pretty intense moms and dads who either screamed or threw things—or both—when Junior didn’t win the 80 novice class. And yet, despite their misguided enthusiasm, neither of those boys went on to have a career in motocross. In fact, very few really do. If you look at the number of pro racers who really make some money and have a career worth having… well, it’s a small number, especially when you consider what you sacrifice.

In the process as you mentioned, every stick and ball sport has an intermediary period where you go to college and work toward a degree while continuing to work on your athletic craft. Baseball, football, basketball, soccer, golf, tennis, swimming, lacrosse… all these sports REQUIRE you to keep a certain GPA in order to keep playing. In our world, the current model is to start a homeschooling program so you can spend more time on the road and at the races while living in a training facility. This model isn’t inherently bad, but it is when your studies aren’t a priority and you don’t end up with a high school diploma. Because when racing doesn’t work out—and there is a solid chance it won’t—you end up a penniless, unskilled 25-year-old without the most basic of educational standards to your credit. That is not a good place to be, and you’d better have a strong back because you’re likely to end up digging ditches for a living.

There is a way to do it right; there is no better family time than going to the races, as long as the whole family enjoys it. And there are good homeschool programs out there, as long as it remains a priority. My advice to parents is to encourage your child to give this sport 100 percent if it really is what he wants to do, but set scholastic goals and hold them to those goals. In other words, be a good parent.

This is Brad Modjewski. I raced MX for many years and had several good rides. Last memorable ride was 2006 mud fest at Millville, when Carmichael made us all look like C riders!

Last weekend at Ironman had me cracking up. The AMA/MX Sports switched to timed practice probably ten years ago, but I always hated it and never got the hang of it during my time. It’s crazy in practice, with guys all over the place trying to learn the track. Most top guys get to ride press day, which is another disadvantage to the privateers. I bet the teams really enjoyed seeing their 250 guys sitting in street clothes under the semi Saturday afternoon. There were easily ten top guys who didn’t make the motos due to the rain after unseeded practice fell. Great for some privateers, but wow. We are NOT NASCAR: we race, so drop the gate and do qualifiers. I know the main reason for switching was track prep and wear, but that’s crap. I’m sure it was something political like everything else.

I always think it’s funny how in both MX and SX, the unseeded guys go first in practice. Seeded guys are always in the middle when the track’s usually at its best. Great to see some of the top guys act like babies when someone gets in their way, too. What are your thoughts?

Sorry for ranting a little, love your column and keep it up!

Hopefully this makes it, I’m sure there’s some people thinking the same thing I am.

I’ve never been a fan of timed qualifying, either. Of all the things we could take from the GP scene (wider tracks, better paddock, better pit board areas, better bike wash areas, etc.), we pick the one thing that sucks for fans and racers alike. I’m all for seeding in the top ten riders right to the motos; there should be some reward for being the best in the sport. It also protects the best riders from mishaps in qualifying where they don’t make the motos (see the list of factory riders who didn’t qualify for Ironman—but they were outside the top ten in points, so they didn’t make it). I was always told the change to timed qualifying was to tighten up the schedule and keep things on time for television and a one-day format, which the teams and riders really wanted. It would be hard to fit in practice sessions—which you would still have to have—and then still more time to hold a few actual qualifying races, all before 1 p.m. motos.

I don’t hop on the factory-riders-get-all-the-perks bandwagon because that’s the way it should be. Fans show up to see the factory riders, period. Every privateer should aspire to be under one of those team awnings, and the path to that is simple: Put up results. Every rider who’s ever had the pleasure of riding for a factory team got there by posting good results, and that is still the formula. All the factory teams don’t get to ride all the press days, either, it’s usually three to four teams based on who has a rider with a local angle for the media. The rest of them don’t ride. Some local privateers also get to ride press day.

You want all the perks of a factory ride? Get your ass in the top five a couple times and your phone will be ringing faster than you can say “autograph session.”