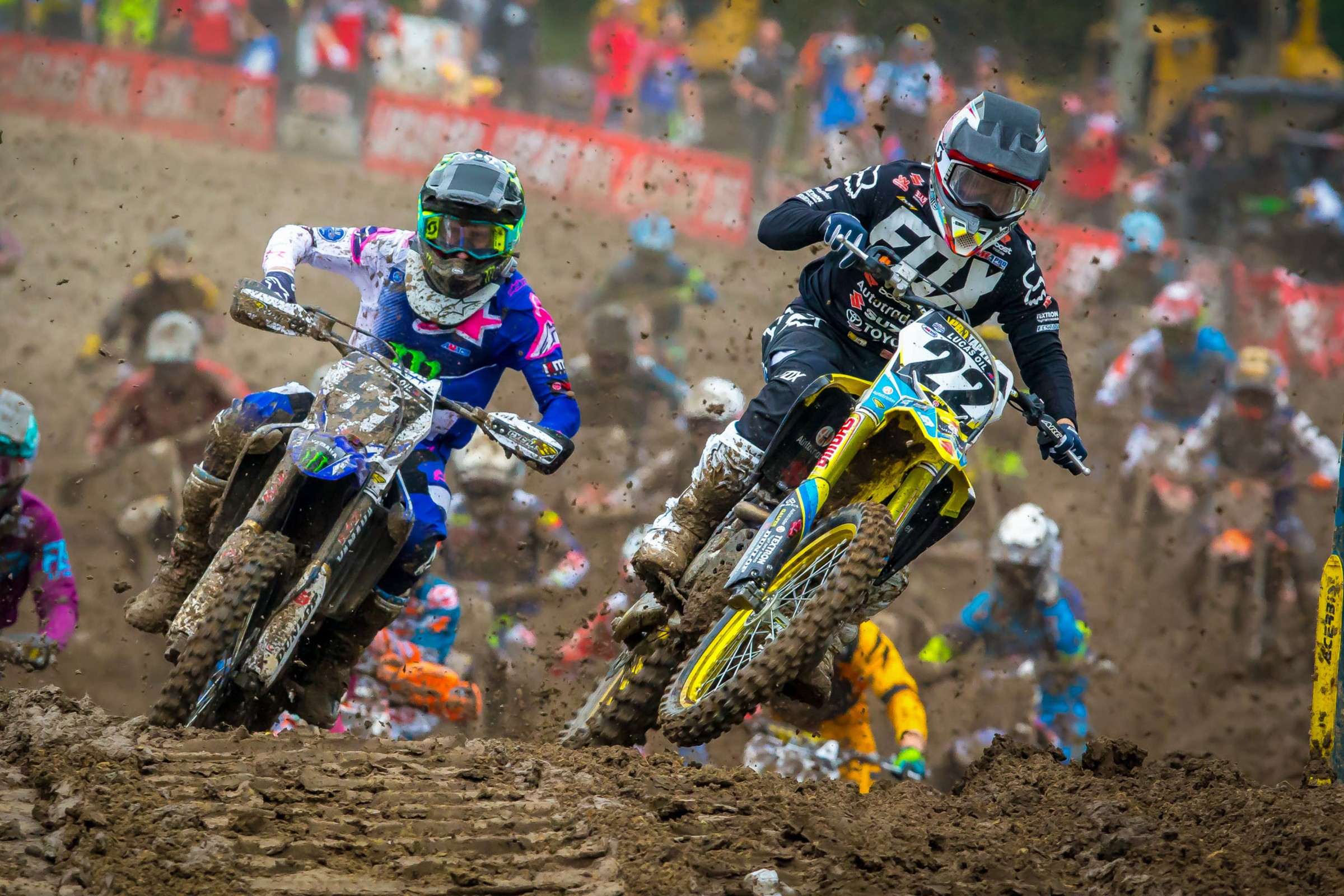 “Mud is the great equalizer.” We have all heard that phrase thrown around over the years. Put simply, it means that many advantages in equipment or otherwise become less important. A factory bike is only going to go as fast as the rider can ride it through a sloppy, slippery mess. That titanium, carbon fiber, and those big horsepower numbers don’t really matter as much when it comes to mud. With 50 or more pounds of mud on the motorcycle, every bike is going to feel like a Sherman tank out there.

The only real advantage I think exists could be on the start, when the mud and water is dragging on the engine. In mud, a rider’s technique, experience, and mental aptitude play a much bigger role. In both motos on Saturday, we saw a veteran’s experience lead to two holeshots. Sure, Chad Reed is a great starter, but this wasn’t about his talent or Autotrader/Yoshimura Suzuki’s engine. This was about him simply outthinking the other riders and using every weapon in his arsenal.

Ironman’s start goes straight for around 50 yards before bending to the right and up an incline. The very inside gate is the shortest distance to the first bend, but it also typically forces riders to momentarily let off the throttle to turn. The only way to avoid this is to be the first person to the bend and control the outward flow through the turn. That’s a tough ask with ten or so factory motorcycles to your left. Most times, the rider on the very inside can get a decent start, but they lose spots as they slow for the bend. They then fight to regain momentum up the hill and get forced to the outside in the left-hand turn at the top of the hill. It’s a “safe” strategy, as no one is coming from your inside to cause problems, but it’s also risky. The risk comes from any rider to your left beating you to the bend and chopping your line. In the two motos on Saturday, Chad had Justin Barcia and Ken Roczen to his immediate left. Unless you have been living under a rock for the past few years, you’d know that those two riders are incredibly good starters and very difficult to beat to the bend… or difficult to beat unless you have an old trick up your sleeve.

At Ironman, there was a patch of grass that was left untilled on the far right of the start straight. It wasn’t directly in front of Reed’s inside gate, but it was certainly close enough. As the gates were picked for the first moto, rider after rider walked past the inside gate without really considering that option. With Reed having the seventh gate pick, there were plenty of opportunities for that line to be taken. Reed had to be chuckling to himself as he lined up on that inside gate. This isn’t a new strategy, but it is seldomly available. There are only a few nationals, both current and extinct, where a line like this could work.

Millville has this exact same scenario, and many factory riders will hop on the grass and drag race down the inside before hopping into the dirt to turn right. Broome-Tioga had a line on the very inside and the very outside that could be utilized in this same scenario. The outside line was not for the meek. To make it work, you had to get out of the gate clean and veer to the left immediately. The far-left side of the start was a service road for the water truck and was also where riders exited the track. It was packed down and didn’t drag the bikes down like the super-deep start straight would. The trouble was that the first turn was all the way to the right, making the far-left line a lot further distance to cover.

The far-left line took full commitment. As the line was coming so far from the outside, it demanded that you left the throttle on much longer than anyone else and drove it deep into the turn. Those on the inside would be coming, and if you couldn’t get there before the pack, you would be shoved to the outside and even off the track at times. It was like outrunning a tidal wave of riders to that first turn. It would be interesting to know the physics of that strategy. The speed needed to cover that longer distance before the inside pack could make the line impassable. In any case, I saw that line used year after year, many times with success. In most scenarios, it was used when top level riders DNF’d the first moto and had a horrible gate pick for the second moto, or in the days before timed qualifying, when a rider’s random gate pick was poor. Everything had to go perfectly right to make it work, so many avoided it unless the situation was dire.

Another example of this strategy was at the Thunder Valley National in Colorado. Several years ago, the track would immediately climb the uphill start after crossing the finish line. As it swung up the hill, riders would only be riding on the very outside of the start (left side), as that was the inside line on the actual racetrack. That left side became more and more packed down during the moto while the main start was tilled very deep. In the horsepower-robbing altitude, that hard dirt on the left made for a huge difference. It was fun to watch factory riders with great gate picks willing to gamble with that very outside line while others would opt for the traditional middle-inside. Nowadays, the entire start is tilled deep to ensure fairness, but for a few years, that outside line was used often.

Back in Indiana on Saturday as I watched Reed line up on that inside line, I knew exactly what the plan was. Jump out clean and veer away from Roczen and Barcia’s threat and onto that beautiful green piece of grass. The benefit was twofold, as his move to the right would give him more room to maneuver (less chance of interference by others) and he would be able to accelerate hard on the firmer grass and beat the pack to the bend. He would then control the flow and stay in the throttle all the way up the hill. It was a great move by a wily veteran.

The most shocking aspect of this whole situation is that when riders lined up for moto two, they all bypassed the line again! Chad was once again allowed to take that very inside gate and able to hop onto the grass. Once again, he beat everyone to the bend and this time was able to control the entire field’s momentum. He had to be smiling as he climbed the hill in the lead. How could no one have taken that gate after seeing the first moto? Truth is sometimes stranger than fiction, I suppose.

As time continues to roll forward, Reed is likely finished with outdoor motocross. He is 36 years old and really has nothing left to prove. Even if he isn’t capable of the moto wins like he once was, he still proved to everyone that race craft and experience can be more valuable than youthful exuberance. Chad hasn’t stuck around this long on luck. He has always found ways to find the edge that others overlooked. He leaves no stone unturned, analyzes every aspect of the race, or, in this case, before the race even starts. If that was indeed the end of his outdoor motocross career, it was a fitting finish to a rider who seemingly always has the mental edge over his competitors.