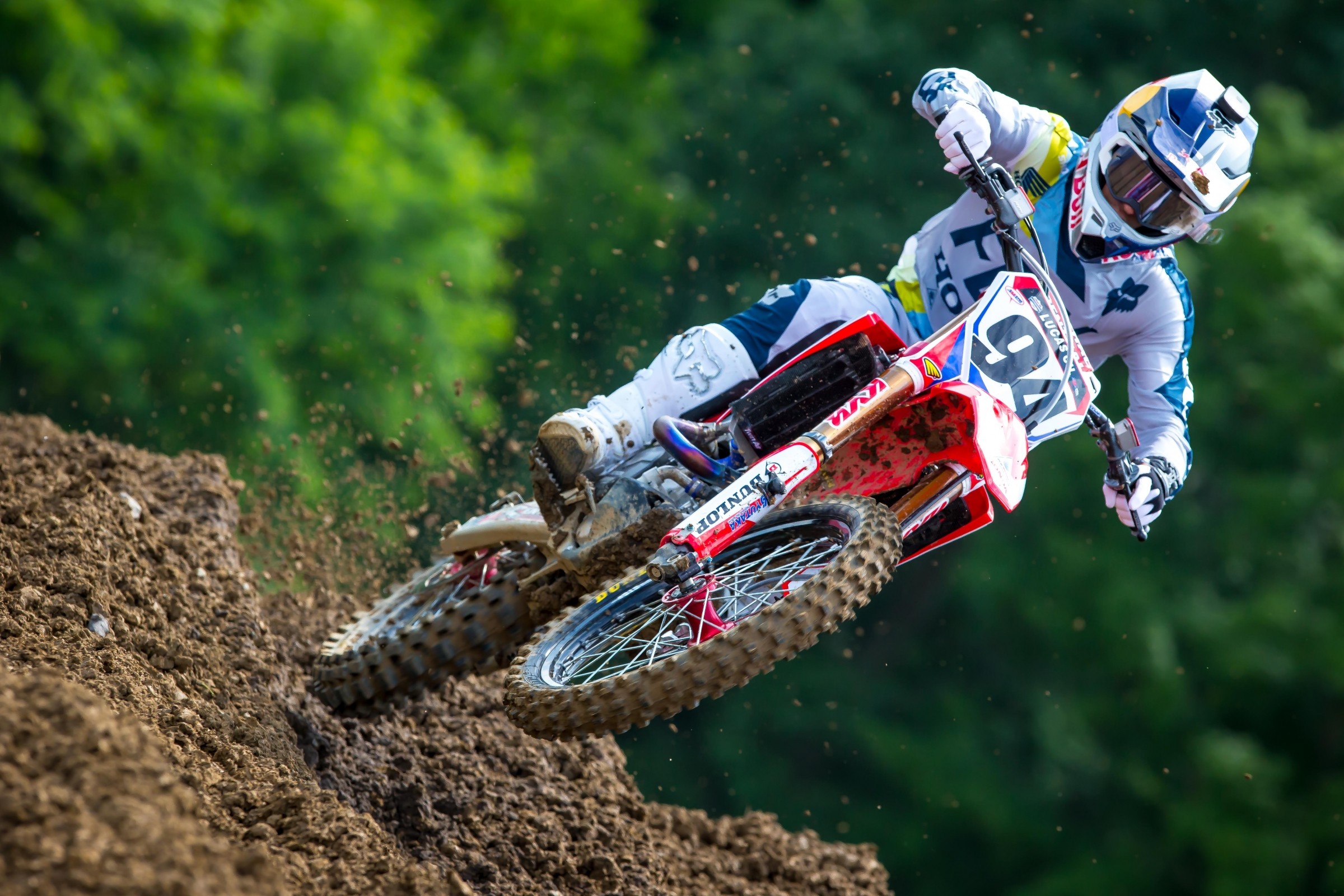 Racer X: Not a great day.
Ken Roczen: I’m surprised you found me since I didn’t win.

I figured I’d better because you’ve been giving me shit. Third place in the second moto. You’ll take it. First moto, dude, that was a pretty gnarly crash. I got to watch it again, but it looked kind of crazy.
I honestly didn’t like the start. The way it was set up, if you are just left of the box, it almost was dead-on with the start turn. So we all funnel from the left and from the right like this. So I got a decent start. The guys on my right—the gate, for example, right next to the box was really good. So Marvin [Musquin] and those guys were up there. They started cutting to the inside, but I wasn’t that bad. I was beside them. So I had to cut in too. Then [Toshiki] Tomita-san, my teammate, he had a decent start, too.

He looked like he came in hot.
Yeah, he came in hot, but we did too. He just kind of touched me in the rear and I filed to the first and just got cleaned out. I knew that once I was down, I was like, there’s going to be a lot of bikes behind. I just got nailed. My upper back is all swollen. The muscles and everything are a little bit thick. Benny [Bloss], thanks for riding over my head. I had a bike on top of me, too. I was just afraid that the exhaust was going to start going through my chest protector and hitting my skin. So I was just trying to get out of there.

I thought once you got up, you had to have been okay with your ride. [Blake] Baggett got you, but that’s about it. You guys worked out pretty good.
To be honest, I didn’t feel that great all day today on the track. I wasn’t riding the greatest, by any means, but I got up to seventh and that’s fine. I’m just glad that we made it through that healthy. For the second moto, I told Oscar [Weidman, mechanic] I’m going to holeshot. No doubt in my mind. I pulled a big old holey. So I was stoked about that. I tried to run up in the front. I did a couple of mistakes, obviously, but Eli [Tomac] and I went back and forth. I just wasn’t having it. I had to fade back big-time. I wasn’t too comfortable out there. Being bummed at myself is better than being hurt on the sidelines, so I’ll take that.

In the second moto where you see Eli and Marv and they’re pushing it, and you don’t like the track, you’re not comfy, you just swallow it up and say, hey, I’m going to take a third?
Yeah. I went as hard as I could in the beginning to try and stay up there. Then when you have such a big gap, it’s so tough to just keep going. Obviously Weston [Peick] and those guys were going good. They just came towards the end, but we were pushing really hard in the beginning. The second moto was a lot better than Hangtown.

Racer X: Your debut with the Rockstar team and you’re down in the first turn moto one. That sucks.
Phil Nicoletti: Yeah, I think Tomita came out of left field and just didn’t shut off. Smoked his teammate, Kenny. Kenny obviously is just a passenger at that point. I could see Kenny kind of had me, and then I just seen this—started braking and this red fender just came balls-to-the-wall and cleans us all out. It’s whatever. It’s not the way I wanted to start. Then I got up that same lap, crashed, got up. I crashed three times. Then I got up and crashed again. I was just like, I just got to ride it in. I was honestly wore out after that. It’s been a really stressful past two weeks. Second moto was okay. I ended up eighth. No matter where I was finishing, obviously the deficit still wasn’t good. We got some stuff we need to work on. I’ve been in California which is a shitbox of a place. Obviously, this is nothing like California.

This is nothing like Glen Helen.
The track was brutal today. I’m just like, I don’t even know what I’m doing right now. It was okay. I was able to ride. I felt okay in the beginning of the moto, but I just didn’t have anything. I just kind of blew up and just rode it in. It’s been a big learning curve. Be able to head back to Charlotte tonight and stay there this week and kind of regroup and be better next weekend.

What do you want to do to your bike immediately to try something? What’s the “something” that comes to mind?
Just some chassis stuff a little bit. We haven’t really had a whole lot of time to do that stuff. Like last Thursday and Friday, I just rode the bike because I wanted to ride it. The guys had some time off, so they wanted to spend time with the family. I get it. Then kind of tested a little bit Monday and Tuesday trying to figure out a direction, but obviously I rode at Pala, and Pala is nothing like High Point. So over the next nine races, we’re going to do eight races. We’re going to make some changes, get some maybe different suspension on Tuesday and try it and kind of go from there. It’s just trial and error at this point and go from there. We made definitely better changes for the second moto, but I just didn’t have anything in the tank to stay up there.

I enjoyed the Peick, [Justin] Hill, [Justin] Barcia, Phil, JGR all-time roster battle going on there.
Yeah, I got the short end of the stick on that one. It was cool. I’m still friends with all those guys. I was bullshitting with Weston and Hill down there at the starting gate. So it’s good. They rode good. They were better today. I got to make some improvements, obviously. I do enjoy the bike. We got to just get a little better.

A couple things: Coy [Gibbs, team owner] said you’re not welcome to ride there.
I didn’t even know Coy was here. I’m kind of bummed. When I go home, I’m actually going to go up and see him.

He said you can’t ride there.
He’s lying.

The second thing was Jonny [Oler, JGR suspension guy] said he’ll bring you a BFRC shock if you would like to try one.
Don’t pretend.

Jonny said he’s going to drop it off.
Jonny knows I’d headbutt him. Like I said, I miss those guys. I really didn’t know Coy was here. I’ll have to go put him in a chokehold.