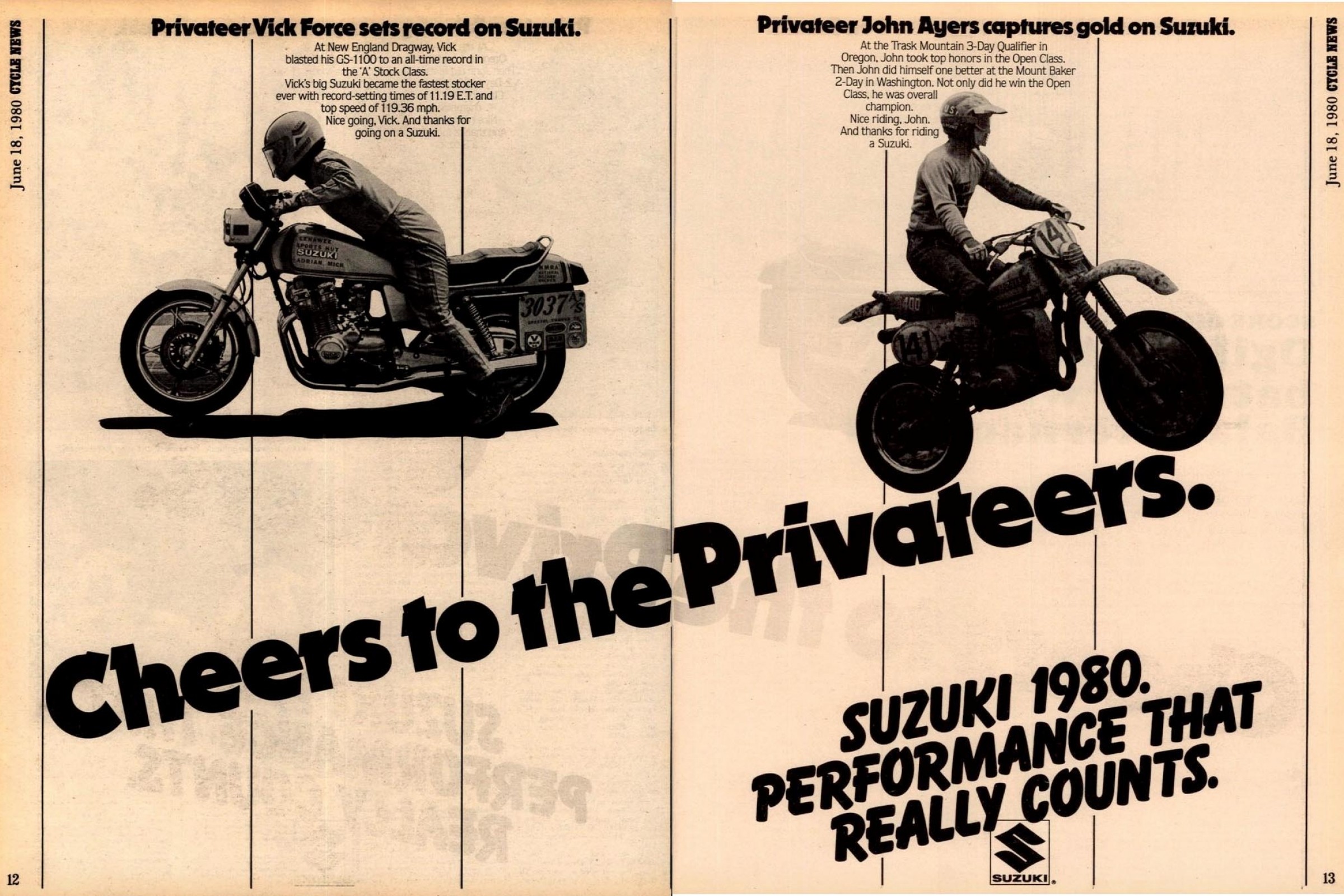 On This Day in Moto June 18

John Martin was featured in the June 18, 1980, issue of Cycle News as Can-Am's "Enduro Ammunition." A top off-roader in that era, Martin is better known these days as the promoter/owner of the Spring Creek National track in Millville, Minnesota, as well as the father of current AMA 250 Pro Motocross title contenders Alex and Jeremy Martin.

Coincidentally, that same issue had a win ad for another top racer from the era who still has much to do with Lucas Oil Pro Motocross: John Ayers, who won a gold medal at the Track Mountain Three-Day Qualifier for the ISDE that year.

"This is the happiest I can remember being in my whole life," Yamaha's Broc Glover said after winning the AMA Supercross series-ending Los Angeles Coliseum Superbowl of Motocross. For Glover, it was the last SX race of his career, as he would move to Europe for one season with KTM in 1989 before retiring. The win gave the six-time AMA National Motocross Champion one of those rare stat lines in The Vault: He, along with Ryan Villopoto, is one of only two riders to have won the last AMA Supercross he ever entered.

At Cycle World USA in St. Peters, Missouri, the 1978 Mr. Pibb/AMA 250/500 Nationals took place, and Yamaha was once again dominant in what may have been the best year ever for the brand. Bob Hannah won the 250 Class and Mike Bell took the 500 Class—the first win for the teenager. Honda's Tommy Croft and Suzuki's Darrell Shultz followed Bell in the results while Hannah led Husqvarna rider Chuck Sun and Honda's Jimmy Ellis.

And in the FIM 250cc Grand Prix of Great Britain, Russian hero Gennady Moiseev won both motos as he inched closer to what would be his third and final FIM World Championship. The KTM rider was trailed by Bultaco rider Harry Everts and home Maico rider and future world champ Neil Hudson.

If you're interested in hearing how the whole 1972 AMA National Motocross Championship came together and worked—it was actually combination of four different series—check out our Racer X Exhaust Podcast on the whole season.

Ricky Carmichael went 1-1 at Budds Creek on his way to what would be his tenth and final AMA National Motocross Championship. The Makita Suzuki rider topped the 2-2 of Chad Reed and the 5-3 of Factory Connection Honda's Kevin Windham.

In the 125 Class, rookie Ryan Villopoto was an emphatic 1-1 on the Monster Energy/Pro Circuit Kawasaki team, topping the 2-6 of Suzuki's Broc Hepler and the 7-3 of Honda's Josh Grant. But in hindsight, the race might be best known as the one where rookie Zach Osborne was running out front on his KTM 250 SX-F before completely running out of steam. Zach would spend the next ten years trying to avenge himself of that humiliation, and two years ago he finally got his first AMA National win at the same Budds Creek track.