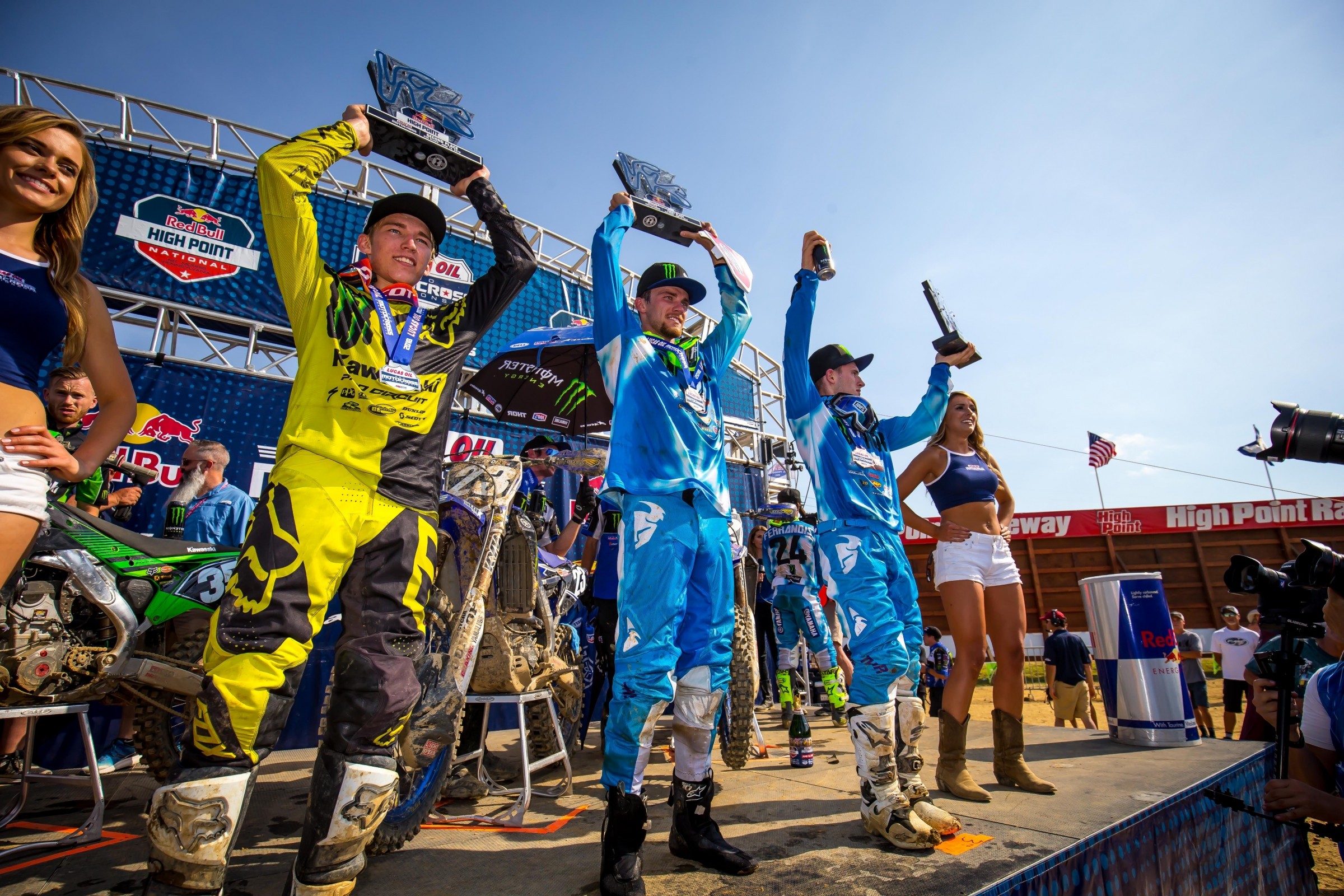 Aaron, we started off the day. You go after Glen Helen with the 1-1, have a rough moto—so to speak—in Colorado, and then today it seems like you didn’t like having your bike without that red plate. You were pretty excited to get that back on there. Talk a little bit about that.
Aaron Plessinger: For sure. We had a really good day at Glen Helen. I really liked my bike there. Then we went back and changed some stuff. We actually changed some stuff for Glen Helen, and then my bike didn’t really work too good at Colorado. So we went back and did some testing on the week off. We got it to where I liked it again. I think it showed today. I got good starts and just pretty much rode my own race. Second moto, everybody was riding good. It’s hard to pass out there, but I got it done. Something happened to Jeremy’s bike, I guess, and I came away with a 1-1 on the day.

Austin, you walked in there today and said you were ready to answer questions. You certainly answered quite a few of them out there. The ride was strong. We talked about it a little bit earlier. It seems like if you come up and you want to battle with you and pass you, you’re going to have to pass you twice because you’re going to come right back. You like to ride good and aggressive. I like that.
Austin Forkner: Yeah. This was my kind of first race that I’ve been up here since Thunder Valley. So, I was up at the front and I didn’t want to throw it away. I wanted to finish up on the podium. So, I was going to make it as hard as I could for guys to pass me, and if they did, I was going to fight right back as hard as I could. That second moto was really tough. I had pressure the whole moto from multiple different guys. It was pretty hot and pretty humid. The track was really gnarly. I’m happy with the second, though.

Justin, usually we see young riders come into the sport. They come out of Loretta Lynn’s and they have a good ride—or not. Then they kind of settle in. Then it takes them a little while. It seems like you decided that there should be no adjustment period for you. You need to be at the front of the pack.
Justin Cooper: Yeah, I’m here to stay. I’m here to be up front. It was a pretty sick feeling to get both holeshots today and put myself in a good position. I was able to run up front and get some more experience up there. I’m feeling more and more confident and feeling like I belong up there now.

Justin and Austin, the track was hard to pass on, but I think you guys somehow passed each other like six times in the second moto. Can you just talk about that battle? Every time I looked, it was switched again.
Cooper: Yeah. I got the holeshot, and I think the first one to get around me was Austin. I was like, wow, this is probably for the podium. So I fought right back and got around him. Down at the bottom of the hill here, they made an option so you could go outside. It was pretty smooth, so I just railed it and was able to get by him. He fought right back. I think I got him back one more time. I was pushing as hard as I could.

Forkner: Yeah, we passed each other a lot. He had that outside figured out at the bottom of the hill before I did. I was taking that inside to guard it, but the outside was faster. I think he got me there twice. It was really just about not making mistakes. I would kind of get away a little bit, and then I would make some mistakes and then I’d catch right back. Lappers were pretty tough, too. I got held up by some lappers a few times just because kind of once you’re in a line, like if it’s an S-turn section, you’re kind of in that line that whole S-turn, so it made it tough to get around lappers.

Cooper: Yeah, like Austin said, it was technical. The ruts were tricky out there. It was hard to balance. You could lose your balance really easy if you weren’t careful. Overall, felt like it was two solid motos for me, and I had fun out there.

Austin, did you know that it was actually [Dylan] Ferrandis all over you in the last few laps, or did you think it was another battle with Cooper?
Forkner: I thought it was still Cooper. Honestly, I knew it was a Star [Racing] bike. I just didn’t know who it was. I told myself—I was looking back a decent amount at the 15-, 20-minute mark. After that, I was like, just quit looking back. It doesn’t matter who’s behind me, just don’t let him by. I really didn’t know who it was. I thought it was Cooper the whole time. We were battling just like that the whole time before. I knew that that was for a podium position, and then after Jeremy’s bike messed up, I was like, as long as I don’t make any big mistakes, I’m going to be on the podium either way. But still, it was for second or third. I knew we were battling, but honestly I didn’t know it was Ferrandis. He was riding good. He definitely put some pressure on me at the end.

Aaron, I think you were eight points down coming in, and you’re up 20 now. How does that change your approach going forward?
Plessinger: It doesn’t really change anything. I’m still coming in to win. Maybe if I get a little bit bigger lead and we pass the halfway point, maybe I’ll start taking into consideration a little less risk-taking and a little more smart riding. I’m having fun right now. I don’t plan to change anything just yet.

Justin, you held Jeremy Martin off for five or six laps in the first moto. Just what were you able to learn from that? He’s a two-time champion and you’re a rookie. What were you able to take away from it and learn from?
Cooper: To be honest, it felt like longer than that, maybe 20 minutes. He was all over me. Everywhere I went, he was right there. I could hear him the whole time. I was able to guard my lines okay out there. I could kind of hear where he was making up on me. It was just hard to hear what line he was going to, to be honest. You could make up a lot of time if you had the right line out there. He ended up getting me in a section where I knew he had a better line than me. I was able to pick up on it once he was in front of me and I could see where he was going. It was kind of a bummer deal. I was trying my best to hold him off.

How important is line selection here compared to another track? It seems way more important here.
Forkner: For me, coming here for the past couple years, this has been one of the harder tracks for me to get used to. In Oklahoma, it’s kind of more sandy and loamy. The dirt here, I feel like, is super sticky. When you get in the line, I feel like it kind of sucks you down. It’s hard to balance in them. You want to stand up or you want to get too far-leaning, so you have to have really good balance. It was just kind of getting used to the track. My first practice wasn’t that great, but second practice, motos came around and I kind of started to figure it out.

Cooper: I agree. I got better as the day went on. I think it’s all new to us, this type of dirt. Being the first few rounds were over in the west, it wasn’t as bad. Thunder Valley was kind of similar, I think. Definitely the ruts were super deep, and they were super solid. They weren’t going to move if you messed up.

Plessinger: Line selection here, it could probably win or lose you the race. I think these ruts can get bad enough to suck you down and drag you down to the ground. I think it happened to a couple people today. It’s really important here to pick the right line, and if there is no right line, you better find a good one because if not, then you’re hitting the deck for sure. This dirt is a lot like what I used to ride in Ohio, so I kind of really gel with this track and I think it showed today.

Aaron, you won on Father’s Day weekend. We know that Eli Tomac’s dad is gnarly. Could you speak to how gnarly your dad is in GNCC country? How gnarly is your dad, and what does it mean to win for him this weekend? I’m sure he was here hanging out.
Plessinger: Yeah, it means a lot. He’s here, and he’s definitely really incorporated in my race schedule and everything. He helps out a lot, and I appreciate him for that. He tells me he’s a gnarly dude, but I’ve seen videos and he doesn’t exaggerate. He was out of this world. One time I think he told me in Arizona or Colorado or something, he took down about 11 fence posts with his head and all he suffered was a broken collarbone. He’s a gnarly dude, and it means a lot to win for him here. I told him happy Father’s Day after the moto. I think he was pretty pumped.

If it was a super-duper mud race, could he still beat you?
Plessinger: If he was on a ’95 KTM two-stroke, maybe.

We’re heading down to Tennessee. What’s your thoughts on heading down there?
Cooper: The last three I think I’ve never ridden before, besides Glen Helen. I didn’t race Hangtown or even ridden any of these tracks, so these are all new to me. This one, surprisingly, I’ve never been to either. I’m a northeast guy and I’ve never been here. Muddy Creek I’ve raced a couple times, so it will be nice to be on a track that I’ve raced before.

Plessinger: I’m really excited to go to Muddy Creek. I’ve always done well there. I’m ready to get down there and see all the fans. They get pretty rowdy down there, and I really like that. I’m pretty excited.