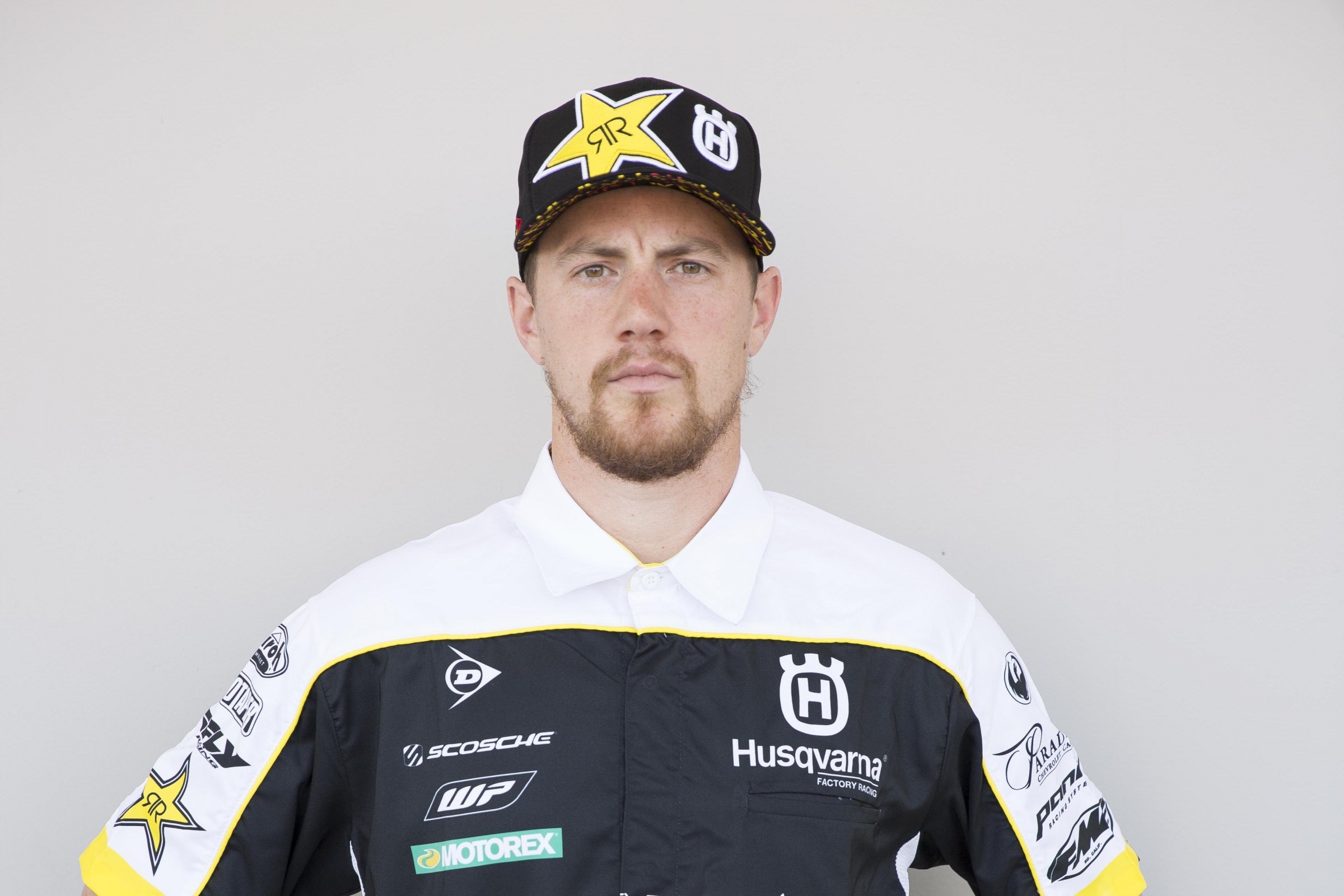 A flurry of moves in the sport last week to replace Rockstar Energy Husqvarna’s Jason Anderson and Dean Wilson ended with Phil Nicoletti going from Autotrader/Yoshimura Suzuki over to the Husky squad. Phil’s probably the only rider in history to go from one factory fill-in ride to another, but then again, he was also the first rider hired by a factory team to be strictly a fill-in. He’s fill-in Phil!

We talked to Phil late last week about how his new deal happened and what he thinks of the new machine.

Racer X: You got a new gig. Talk about how it all came together. It was kind of a shock to see that happen.
Phil Nicoletti: I’m super thankful for the opportunity. Obviously everything with JGR, for the last five years, has been really, really good. I’m going to miss those guys, but sometimes change is good. Obviously, my time there for this summer was limited. I didn’t quite know what the deal was. I had asked last Monday before Colorado if I should book a flight to RedBud, and I couldn’t really get a straight answer on if I could go or if I couldn't go or whatever. So at that point in time, I’m just like, well, I can kind of see the writing on the wall. I need to try and figure something out.

Obviously, Deano’s bike and Anderson’s bike was open, which obviously is a shock to the Rockstar Energy Husqvarna team, but I feel like I was kind of the next best guy in line that was kind of open, basically a hired gun. My agent had talked to Bobby Hewitt a little bit and kind of planned some things out and things started happening quick. Everything kind of got finished up on Monday. It was good. It’s been a stressful, hectic, but awesome week.

Financially, this probably isn’t a lot better for you, or better at all, but it is a guarantee for the final nine rounds. Is that what led you to it?
Yeah. It’s hard when you’re going week by week or every two races or something like that. It doesn’t really give you much of a window. Next thing you know, you’re just stressing about that the entire time. I feel like I’m in a good position to do well. Obviously, it is a nine-race deal for the rest of the season, so I don’t have to stress about anything until the end of August, then it’s right back to it again. For right now, I can focus on every week as if it’s a normal week and not if I’m going to go racing or not. Being a hired gun has kind of helped out a little bit. I’m still thankful for the opportunity.

Man, I don’t know where to begin. I’ve been with this crew for a long, long time. Never in my life would I have dreamed of being with the @jgrmx organization for that long, with the opportunity I was given there. The people I’ve met and the memories I have made there are unbelievable! They are considered family to me, and will always be great friends! With that being said, I’m really excited with my new deal and can’t wait! See you at the races!

I predict at some point you’ll be back with JGR.
I left there on great terms. I’m awesome friends with everybody. I wouldn’t have an issue with that if that was the case.

You’ve been riding Yamahas and Suzukis for a long time now, and now you’re on a steel-frame Husqvarna. How is it? What are your early impressions?
It’s good. It was actually pretty ironic. I think I’m riding Deano’s setting. At the moment, it’s a little stiffer. Him and I are kind of the same way, but he’s got a little more leverage than me, so I think that might play into it. I rode it at Glen Helen, which, I’m really not a fan of that track, but I felt somewhat comfortable there for my first day. I like it. There’s a lot of different things on the bike. Hydraulic clutch, steel frame, white fender I’m looking at. There’s a lot to take in. One of my old friends, Scott Lilles, came out and kind of worked through all the parts with me.

I’ve been riding dirt bikes my whole life. It’s not really that hard to kind of switch motorcycles and kind of get the feel of it within a couple days. It’s pretty basic. Everyone at our level is okay at doing that. It’s been a blast. I haven’t really tested a whole lot. We’ll wait until next week to do that. I just kind of wanted to get on the bike and put some time on it and just feel things out and not get too crazy.

What does it do that you like better than your old bike?
At the moment, it’s super lightweight, so it feels really good. The power is nice and it’s smooth. It’s pretty stable. It does okay. My time on the Suzuki, it was really minimal up to Hangtown. Now my time on the Husky up to High Point is pretty minimal. It’s pretty cool. I already feel pretty comfortable on it, and I kind of know the changes that I feel like I should make on it come next week. I think we’ll be in a pretty good ballpark.

Did the team tell you to please slow down when you see a downed rider at Glen Helen?
No, they didn’t mention it but I had it in the back of my mind. I’m like, man, I’m out there with 65cc riders and vet guys. Meanwhile, the REM track is open and it’s like, should I go ride the REM track? It’s been a bummer deal for those guys. It’s just part of it, I guess.

For yourself, do you anticipate getting better results on this thing? Do you think it will help you that way?
I don’t know. I can’t really say if I’ll be better or worse. Obviously, the goal is to get better. The goal was to do better on the Suzuki, too. We’re just going to have to kind of wait and see. Obviously, racing a bike under race conditions is a lot different than just practicing on it. The Suzuki did a lot of things great, and the Husky does a lot of things great. We’ll see. I just need to get a good start. Kind of fine-tune the thing to kind of how I like it and go from there. It’s not rocket science.

Did the fact that they made you go to California almost make you back out of the deal?
It’s not that it made me back out, but it’s just like, at this point in time, it’s really hard to come to California because the tracks are so terrible. Everything on the East Coast, all the tracks are nice and it rains every two days. The dirt’s better. But this is the place I had to be for this point in time to kind of get stuff done. I plan on hopefully going back to Charlotte either after High Point or after Muddy Creek and still staying there.

Do you think JGR will let you ride at their place still?
I’m pretty sure Coy [Gibbs] and J-Bone [Jeremy Albrecht] would if I asked them to come up and ride. I’m still good friends with Weston [Peick]. I’m sure he wants to ride with somebody and all the other guys. I don’t think it’s that big of a deal. Kailub Russell [GNCC Champion] goes up and rides there and he’s on a KTM. I don’t think it would be that big of a deal.

What about the Baker’s Factory? Did they say you could go there?
They kind of talked about it. Obviously, I don’t really know what goes on down there. I don’t think I can go down there, because I’m only temporary. Which, I get it. That would have been a pretty big move and everything for me to go down there anyway. But I talked to Alex [Martin] and his wife. If I do go down, can I rent a room in the house? He said, “Yeah, no problem.” I was kind of looking forward to that, but at the same time, if you can’t go there, you can’t go there. I’m really comfortable in Charlotte. It’s not just Club MX. I can go ride at Cooper’s Webb’s track and go to JGR, so it’s still a good hot spot.

So this PulpMX sticker deal, is it still active? Are we still doing it?
I still have it on all my helmets. I have yet to collect my incentive from you yet. So far I’m three races in and I haven’t gotten anything from Pulp. And there’s been a lot of pictures that have PulpMX on the helmet. A lot of exposure for you.

It’s going to be weird for you to walk by the JGR truck. Those guys have been friends and family for you for so long.
It is going to be weird. I told them when I ride by, I’ll give them the finger as I ride by. It’s not a big deal. I’ll still go over there and get John’s cooking and stuff like that. I’m not too worried about feeling uncomfortable walking over there at all. Those guys bust my balls, so it’s all good.

Again, I think you will be back there at some point.
It doesn’t matter. As long as I’m riding, I’m happy. I’m just happy with this new adventure that I’m on now.

You’re a Rockstar athlete now so you’re back on an energy drink program. Monster dropped you there, but now you’re back.
Yeah, I think I’ve hit all the energy drinks.