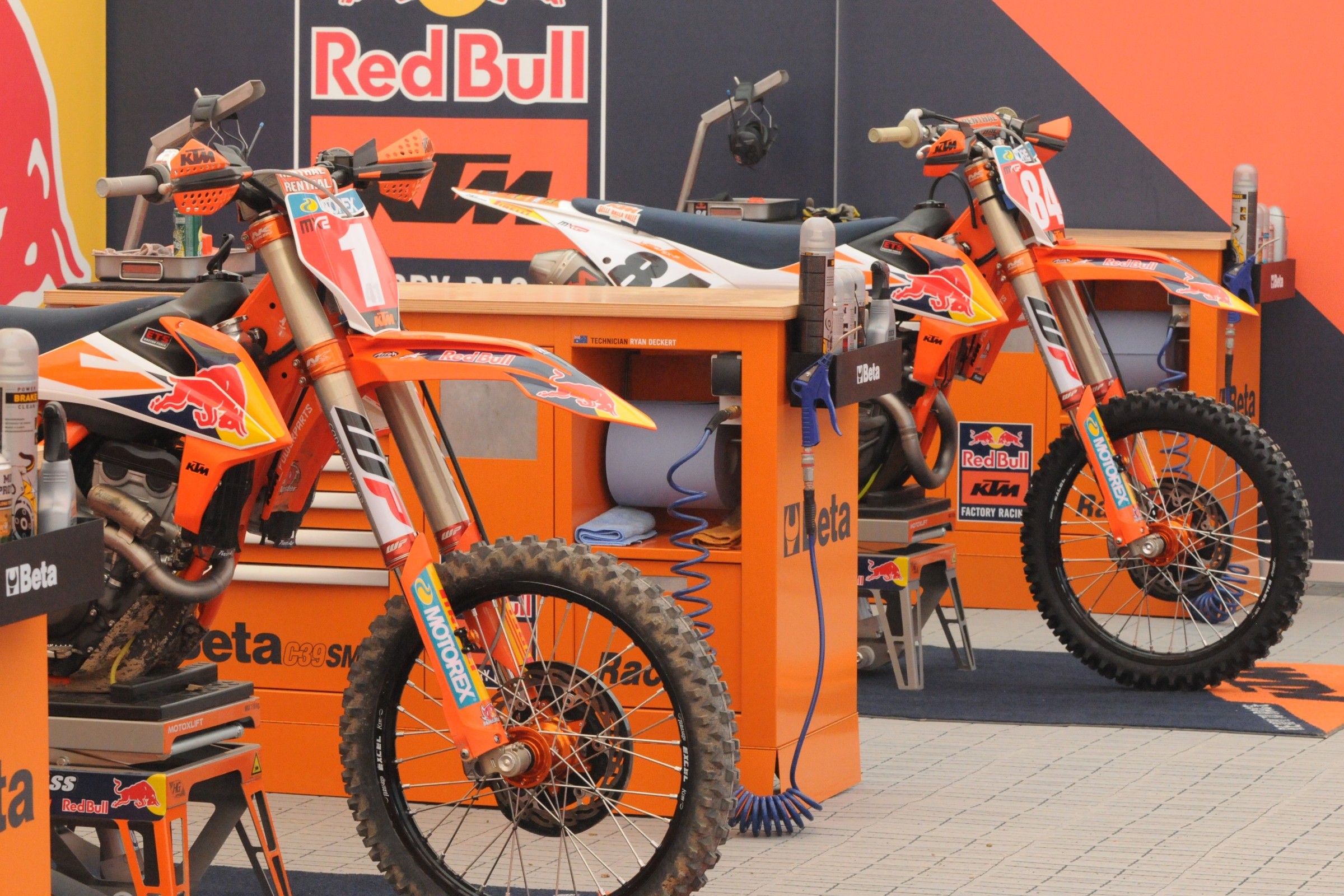 Insight Race Day Feed from the MXGP of France

With an off-weekend in the domestic motocross ranks, we had room for some extra MXGP coverage from the Grand Prix on France. Nico Bombin of mxreflexion.com volunteered to write a Race Day Feed from the weekend in Saint Jean d’Angély, and we were happy to accept.

To read about everything that happened, start at the top and work your way down. If you're only interested in moto summaries, scroll to the bottom, as posts are in chronological order.

If you can read French, check out mxreflexion.com for more race coverage.

You know that you are on French motocross soil as soon as you go through the entrance of the track. Not so much because of the fresh cigarette smell, but thanks to the amazing fans who are already fired up in other ways, and yes, it’s only 8:30 a.m. Cow bells, fireworks, costumes, wigs, chainsaws… they have everything ready to make some noise and support French stars Gautier Paulin and Romain Febvre in the MXGP Class, as well as wild cards in both MX2 and MXGP. Let’s be honest, though, it will take more than some cheers to stop the KTM domination we’ve seen this season with Jeffrey Herlings, Antonio Cairoli, Pauls Jonass, and Jorge Prado.

The track is prime and got some modifications, such as new tabletops and a few changes on the corners at the bottom of the course. Bummer there’s no more “Pastrana downhill jump,” as it has been replaced by a double on top of the hill. The track has been groomed, but it won’t take long before riders get to the hard pack base underneath.

Hopefully the weather won’t be as bad as announced, but be ready for a mudder, just in case.

Practice sessions are ready to go, so check below what happened there.

First one of a long weekend of dirt bike racing. As usual, no one is in a rush in this one, as it doesn’t count. By watching Prado and Jonass, we could see flashes of speed, but these two guys looked in absolute control. They just pushed in one portion of the track at the time and slowed down for the rest of the lap. That didn’t stop Jonass from setting the fastest time with a 1:50:747 while rolling the track smoothly.

The track had dried throughout the day and looked prime for the MXGP Class. In this one, it seemed like riders were having fun. Herlings made a statement early with a 1:47:565. Antonio Cairoli and Tim Gajser tried to go for it, but couldn’t match the Dutchman. Even Gautier Paulin, at home, couldn’t do better than a second place in this one.

Riders took this one more seriously. Jorge Prado showed what he has in the tank and rode way faster than he did in the first practice. That paid off, but the top four fastest MX2 riders are tied on the same second (1:50). We talked to American Marshal Weltin, who doesn’t perform in timed practice usually, and he said the whole class is really tight and the start will be key to the race (never heard that before, huh?). The American got 24th, but is only four seconds behind the top of the board.

Jeffrey Herlings definitely dropped the hammer in this one with a 1:45:153! Second was Tim Gajser with a 1:46:770. Those two were on another planet, but the rest of the field was close with five riders in the 1:47 range. Gautier Paulin led that best-of-the-rest group of Desalle, Searle, Aranda (wild card for the weekend), and Jasikonis next.

Anything can happen in the qualifying motos; let’s go there.

This season, Jorge Prado has proven he is great out of the gate. From the very inside, he powered his Red Bull KTM to a nice holeshot, but the lead was taken back instantly by German rider Henry Jacobi.

The first lap didn’t go well for Marshal Weltin, and Hunter Lawrence had to to pull by the mechanics’ area before joining back the course.

American rider Thomas Covington clearly didn’t consider qualifying as a minor race, as he quickly went after Prado and brought Pauls Jonass with him. Both passed the Spaniard and started a nice battle. The championship leader was even more aggressive on the Rockstar Husqvarna rider and almost went down attempting a move on a jump. He would stay calm after that and cruise to a second-place finish. Prado did the same thing in third with Jacobi far behind the top three. We noticed that Ben Watson set the fastest lap time in the last lap, but he couldn’t get better than 12th.

Massive holeshot from Herlings, and that killed any kind of hope for anyone else. Paulin was already far behind in second after one lap. We saw some carnage behind them, including Clement Desalle and Gregory Aranda getting stuck in the corner right before the finish line. The Belgian would crash in the same spot all by himself a lap later. This moto got pretty crazy—much more so than the MX2 race.

Tim Gasjer was riding well in third, but he quickly got the pressure from Romain Febvre. Antonio Cairoli, in fifth, was patient and didn’t care about what was going on in front of him. His patience paid off as Gasjer faded. He got passed by Febvre, then Cairoli went for the pass as well. Maybe Gajser didn’t feel comfortable and played it safe. We’d wait until the last lap to see the next pass from Cairoli on Febvre. The crowd was disappointed, but they still got Paulin finishing the race in second.

We know what to expect for the Sunday races. In MX2, the battles and the show will be conditioned by whoever starts up front. In MXGP, though, it looks like it will be Herlings’ race to lose.

The only thing that could possibly change this order is the heavy rains and storms predicted overnight. The track is now very hard-packed, so it will be a completely different situation if this happens.

Weather forecast wasn’t wrong by predicting rain overnight. Thunder was loud and the track went from concrete to mud in a couple of hours. The poor EMX125 riders had to go first with no practice, straight to their last race of the weekend at 9 a.m. We were left with a cemetery of smoking two-strokes. Only five riders finished the race in the same lap.

Let’s see how it goes for the premier classes.

There was a lack of interest in this one, as the track developed only one main line. No one really pinned it to set a fast lap time. Mid-pack guys like Stephen Rubini even got the pole position in this warmup. Too bad it counts for nothing. It does help confidence, though, and you can tell Herlings is all about that. Even in cruising mode, he put a statement early in the day, putting himself in pole position.

Thomas Covington grabbed the first holeshot of the day and pulled away, throwing roosts to Henry Jacobi and Jorge Prado. You’d have to look further back to find the number-one plate of Pauls Jonass, buried around 15th in the first corner. He made his way up to the front so fast that he was already in the top five within half a lap.

Meanwhile, Prado lost the front end attempting a pass on an outside line. He’d get back up in seventh and understood it was time to charge back up front.

He was so quick that it just took a few laps for him to make a move on Jonass. He actually pushed him out of a rut to take third place. At that time, the young Spanish man just focused on lap times to close the gap between him and the two Husky guys. This strategy worked, but he would’ve needed a couple of extra laps. Covington and Thomas Kjer Olson made for a 1-2 Rockstar Husqvarna sweep.

Herlings picked a crazy line on the gate on the far outside! He won the bet as he pulled a massive holeshot from this longer but drier line. Clement Desalle was the only non KTM in the top four, as he was surrounded by the orange machines of Glenn Coldenhoff and Antonio Cairoli. The Belgian didn’t want to let the red plate-holder go away, but the battle never happened because of Herlings’ confidence shutting down the Kawasaki rider’s efforts.

Behind these two, a gap shaped out due to Coldenhoff holding back his teammate Cairoli. Mid-moto, the Italian made the pass stick and could work with clear vision to concentrate on the stopwatch like Prado did in the MX2 Class.

Lappers would get in his way, giving Desalle some breathing room. At the end, Clement chilled a bit too much and Cairoli showed a wheel in the last lap. Desalle was eventually able to hold his second place.

French riders Romain Febvre and Gautier Paulin couldn’t grab the podium spots the loud crowd wanted from them. The scene was packed with blue, white, and red colors, but the two lead Frenchman ended up far behind in the seventh and eighth positions.

A great start for Jonass, using the same gate and line as Herlings earlier. Prado was right on him applying pressure, which worked quickly because the number-one plate-holder made a mistake and crashed a few corners later. He found himself around the 20th place.

The winner in the first moto, Covington, was seventh early on and charging to save an overall podium. He made some quick moves until Italian Yamaha rider Cervellin gave him some work before the American rider finally got to fourth. It was Prado, Geerts, Olsen, and Covington, all separated by a large gap.

It was a weekend to forget for future GEICO Hond rider Hunter Lawrence, with crashes all day long. On a positive note here, we’ll keep in mind he was two seconds faster than leader Jorge Prado at one point.

Covington never gave up. He put his head down until the end to grab third place. He ended up tied for the overall win with Prado, but was second on the box due to the second moto finish.

Last holeshot of the day was for the number 222 KTM. The Italian had the lead and some extra motivation knowing Herlings was further back in fifth. Herlings’ outside line off the start didn’t work great that time around, but “The Bullet” worked his way up quickly. He swallowed Gautier Paulin and Jeremy Seewer early on, but the gap was still large to get to the leaders Cairoli and Gajser. From that moment, these three focused on lap time improvements only. They all scored one 1:52, but Herlings was able to duplicate it almost every lap. He passed Gajser with 15 minutes to go and had Cairoli in his visor. Hungry for victory, he set a few incredible 1:51s, which would place him right behind his teammate.

As we’ve seen this whole season, Herlings showed once again his fitness is on point. He and Cairoli went side by side in the long start straightaway, and Herlings made the pass stick two corners later. With four laps to go, it was over. Jeffrey was free to a 1-1 score; yet another perfect weekend.