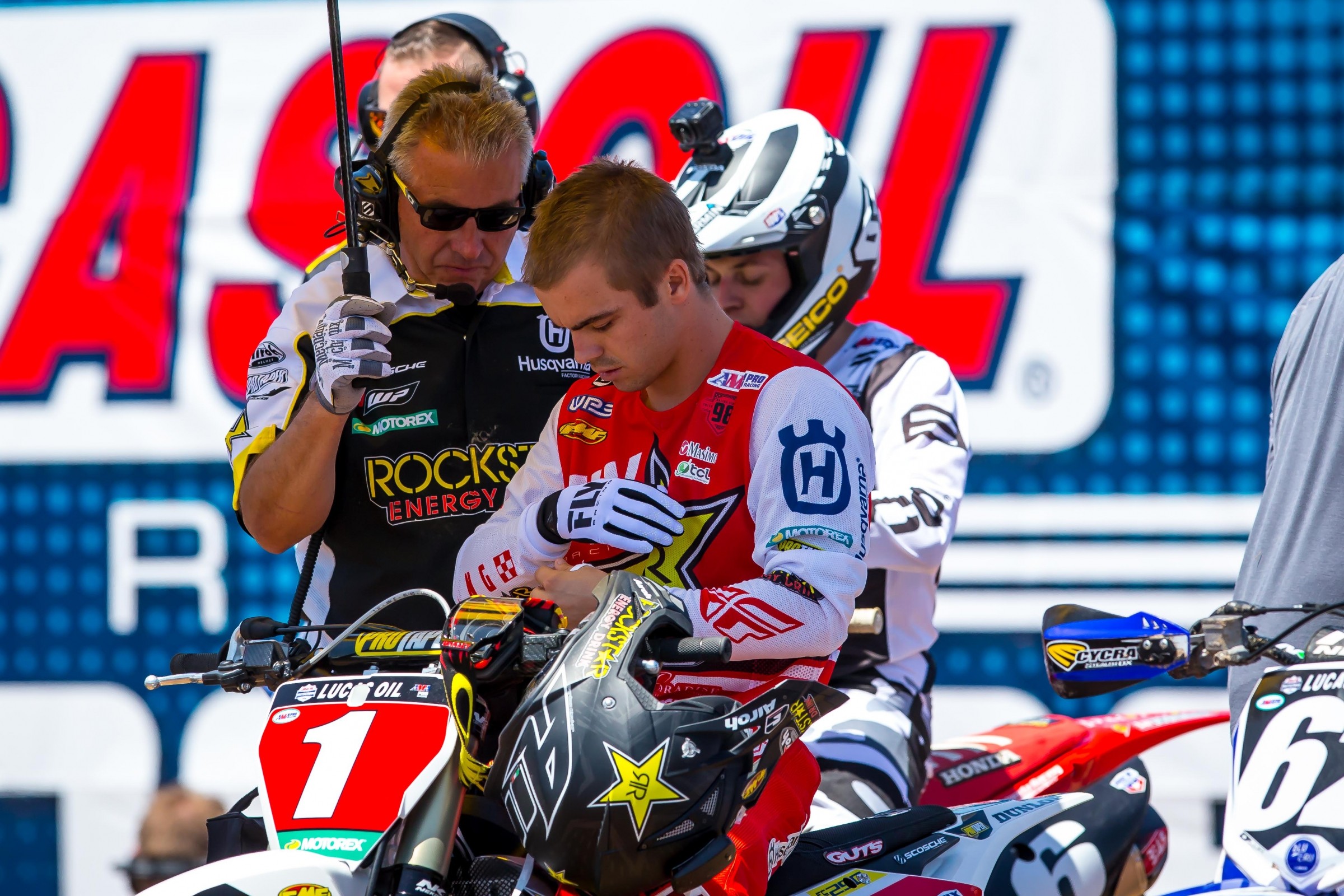 What a day yesterday. Rockstar Energy Husqvarna was making moves in light of its recent run of injuries, which even included grabbing Phil Nicoletti from Autotrader/Yoshimura Suzuki as a replacement rider. Also, Zach Osborne is suddenly out of Lucas Oil Pro Motocross with a bad shoulder. Things change quickly.

Here are some questions and answers on the process—we’ve also added questions from you via our Twitter.

1. Why did Rockstar Husqvarna go shopping?

Dean Wilson and Jason Anderson were claimed in separate open practice incidents in California, which illustrates just how quickly racing luck can go south. Husky was celebrating double supercross titles a month ago! At least Anderson can prop his broken foot up on the Monster Energy Supercross Championship trophy. Wilson needs a deal for next year, and it has to be killing him to sit on the sidelines with a torn ACL.

Several rumors over who could race for the team, from GP riders in Europe (though the schedules don’t match up very well) to Husqvarna riders from other disciplines—we heard maybe our buddy Ryan Sipes (who raced for the Rockstar team in moto for a while and is now a Husqvarna rider in off-road and other exploits) or even the ageless Mike Brown. Nicoletti, though, is available for all remaining races and is a top-ten guy at worst, and a top five to podium guy when he’s on. He’s seventh in 450 Class points right now. This was an easy decision.

3. Will Phil cheer up the Husqvarna team?

There’s really nothing more fitting for a team that has recently lost three riders to injury than to bring in the happiest guy in the pits.

4. Why was Phil available?

“Fill-in” Phil was riding Justin Bogle’s bike for Autotrader/Yoshimura Suzuki. His deal was basically week-to-week, and JGR was okay with him finding another deal if another one came along.

5. When will Bogle return?

That’s not known yet. He’s back on the bike and testing with the JGR crew in North Carolina but an exact return date will depend on his progress with bike and body. Bogle suffered a broken upper arm back at the San Diego Supercross. That’s gnarly.

6. Who takes the Bogle/Phil spot?

Smooth move here by JGR to just move Justin Hill to the big bike. Hill tells everyone he’s a much better 450 rider, and we’ve seen some proof of that in supercross. He’s never raced one outdoors so we’ll see if this strikes gold like it did at the Tampa Supercross.

JGR’s 250 team for outdoors was supposed to be Hill and Jimmy Decotis. Decotis broke vertebrae at the Daytona Supercross and Kyle Peters was going to take his spot, but he tore his MCL and ACL. Enter rookie Enzo Lopes, who signed a three-race deal with the team to fill in for Decotis. Lopes was given a deal for the rest of the nationals. Decotis is back on a bike and will return at Muddy Creek. At High Point, JGR’s 250 team will consist only of Lopes.

8. What happened to Wacko Zacho?

His thumb hurt but he was going to tough that out. The first turn crash in Thunder Valley tore his labrum (in his shoulder) and that was the end of his summer.

No. Monster Energy/Pro Circuit Kawasaki doesn’t love Zacho, but all Joey was doing was running wide open around the outside trying to salvage a start. Crazy stuff happens in first turns, and it’s pretty much impossible to intentionally wreck anyone in all of that chaos.

Zacho would love to race for the team again and would probably be healed in time to race. Obviously, Jeremy Martin, Aaron Plessinger, or any other fast American who ends up winning the 250 National Championship is going to be the first choice, though. Both J-Mart and AP have said they’re racing RedBud if they get picked.

@DcManns:
Seems like a no brainer for Phil. Now who grabs the KTM 450 ride?

No one, as long as Marvin Musquin remains healthy. Red Bull KTM ran a one-man show last summer after Ryan Dungey and Trey Canard retired. They’ll just save their money for 2019.

The German marque wants Ken Roczen on its team badly. They can even keep him on red bikes, which matches nicely with his Fox Supreme gear. The only problem is that the brand is about six zeroes and a digit short on salary budget.

@BigBad408:
Shane McElrath off to a slow start in the 250 Nationals, why not throw him on the 450? Depleted field, some seat time on the big bike, test the waters.

Not a bad idea, but we're just six motos into the 250 Class, which is always up and down. Shane could be on the 250 podium as soon as High Point—that’s how that class works.

@mattk358:
Why give the fill in ride to someone who has a ride already? Why not @Taft53

Teams aren’t charities. They’re not trying to fill out employment numbers, but trying to get the best results possible. That’s Phil.

@dinglebees:
Justin Hill immediately makes the 450 class a lot more interesting among the top 5 riders, yes or no?

Yes, he does. He loves a 450, so he will be motivated at the first try, plus the field is now, ahem, thin with all of these injuries. If he can get a start, it will be interesting for a while.

@Spudinki1:
Jason any update on ktm fill in for broc and what do you think will improve national tracks

I don’t think KTM is looking for a fill-in unless Musquin gets hurt and misses races. As for tracks, ask 40 people and you’ll get 40 different answers.

When you’re nicknamed “Troll,” most people aren’t thinking of you as a 450 guy, even though there’s no real data to say you have to be big to be good on a 450 (Carmichael, Stewart, Villopoto, Roczen, and Musquin, to name a few, are not giants among us). Alex’s deal is up at the end of the year and there’s some shopping going on to a variety of 250 teams. These recent podiums certainly help his prospects.